Insect bites at the KIR

I've just had a call from Carrie Yeager, an investigator with the Warren County Health Department.

She has visited the KIR, and went through the rooms of many of the folks that suffered insect bites. She found no evidence of bedbugs, and she looked carefully. She has spoken to many of our folks about what they have experienced.

Cincinnati (and the midwest in general) has been plagued with an outbreak of bugbites and rashes. The cause has been determined to be a resurgence of a tiny insect called itch mites or Oak mites. See the links below for further explanations.

This sure sounds like what we experienced. I'm sorry that folks suffered with this, but happy that it is NOT directly related to our hotel choice.

Please read all three articles. Please note that there is no danger of infestation of your homes.

Thanks for posting this Bruce,

makes me feel better to know it wasnt directly related to the hotel, and could have easily been from the trees in the area.

I know lots of us were hanging out in the shade.

I am glad to know that they are not bed bug bites as I too talked with Carrie Yeager this morning. While it now seems completely excessive that I would not unpack my belongings in my house and took all the luggage and all of the bedding and towels that Shalon and I used while at my house to the laundromat - eschewing my own washer - to wash everything in hot water and dry the heck out of it, I will now be sleeping much better at night. That is once these bites finally go away.
W

Good news. I spoke with Shawn, the General Manager of the King's Island Resort & Conference Center, and the ECOLAB exterminator on Tuesday before Jason and I departed. We got a couple of nibbles, but nothing anywhere close to what other people suffered. Shawn and the exterminator checked our room and found no evidence of bed bugs, which is a huge relief. However, we did spot a couple of spiders... one in the room, and one making an attempt to get in.

I have to say, Shawn was very concerned about the people who suffered the bites, and I think he did everything he could to deal with the situation when he found out about it.

we have all experience these bites too. We had decided that they could be bed bugs too. Glad to know otherwise. These things itch!!

Just FYI. The hotel's position is that there is no evidence of room infestation. Therefore, no compensation/refunds will be offered.

And here I was wondering if it was just my family that had these! Is there anything we can do to get rid of them?

There is no real treatment for these mites. The effects are usually gone in 10-14 days. Try not to scratch inflamations, as this can lead to skin infections.

Benadryl can be taken if the itching is severe. Some folks try hydrocortisone cremes on the inflammations, but there is no solid medical recommendation for these.

looks like i'm not the only one. it seems to be better now the itches is going.

I didn't stay at the hotel. I noticed bites that were a little harsher than mosquito bities. I spent all weekend in the "Lot" area under the shade.

Overheard a few people taking about the possible bed bite issue during the show-n-shine.

I thought it was from the night drive home. Windows open flying up the interstate.

AK Mike and Torque Delight both had these, and they stayed at the Sheraton. Definitely not a hotel room issue.

While visiting in your room (while the LAN was being constructed) I felt something akin to a pinprick on my arm. AK Mike said I was being a hypochondriac, that I was imagining things. Well I imagined that pain into a red bull's eye with a white center. The red is faded now, but the center scab remains, as do those of the other 'targets' I aquired that weekend.
R

Within 3 days of being bitten by a tick, many people will develop a red spot that never expands to bigger than a dime. This is an allergic reaction to the saliva that the tick is spitting into you. If the red spot grows in size over a period of a week or so, to bigger than two inches, then it is likely to be a sign that you are infected with the Lyme disease.

All my bites are starting to fade.

What are the chances that most of the bites are looking like this as they begin healing? 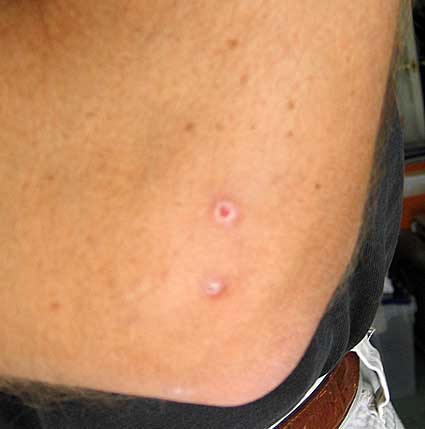 FYI...We did not experience any bug bites.

My wife's more than a bit annoyed. SHE's got some of the same appearing bites, possibly from handling my laundry?
I've no new ones since departing hell....(sorry, thinking about that "real" billboard on I 71)... but now she has 5 or 6 of these similar marks.

Hi! I stayed at KIR hotel, spent time in various areas under trees, hiked in the Cesar Creek Nature Preserve, sat in the grass at the Air Show (excellent air show!), and suffered no bug bites.
Kristina

We are healing well...

I can't believe the bites have lasted this long... it's been a week and a half!

the last two on my shoulder are getting there one faster than the other... at least the itching is going away
R

The bites did last a long time but I was amazed at how wide the swolen areas were. I think if you scratched, even lightly, the irritant spread under the skin to include a larger area.

The incubation period for the swelling was about 24 hours. My son and I arrived Friday night from different parts of the country, stayed in the room for two nights and had new areas appear on night three but no new areas showed up 24 hours after we had left the area.

Clothing could have been a factor for why some were bitten and some not. Moskitoes like me too but these things seemed to only appear where there was loose clothing.

A BIG thanks to Bruce for taking this issue to the Health Department. That shows a real committment to the club and its members, and I for one truly appreciate that action. A lesser man would have forgotten about it as soon as Monday rolled around. Thank you, Bruce! You really did the right thing here. I know it eased the minds of A LOT of us to find out what the issue really was.

I should have said this sooner but you know it takes awhile to come down from that Fest 'high'...

Just mentioned this to a visiting nurse who also has had these bites, and it was as mentioned in first post, oak mites, they drop on anything that moves-- to get somewhere else, painful and generally around trees, sounds like conditions were perfect, everyone hanging around the trees for shade.
V

The Ripster said:
Just mentioned this to a visiting nurse who also has had these bites, and it was as mentioned in first post, oak mites, they drop on anything that moves-- to get somewhere else, painful and generally around trees, sounds like conditions were perfect, everyone hanging around the trees for shade.
Click to expand...