Finally did it. 50 mpg plus

No not for a full tank but.......My work ride is appx 25 miles each way. I've tried and tried to hit 50 on the trip (always much closer on the way home in the evening).

The best I've been able to do is 49. Today I smoked that. LOL

I even got caught by one of the two traffic lights.

Nice work! What was your average speed?

And, am I seeing this right as a DSG car? Can't remember what you have.

we went on a trip today and got 43.X per the MFD (AC on whole time) - we were going between 55-70 and I was going up grades in 5th gear and pulsing throttle to help seat rings. We have a little over 2000 miles on our car.
P

Very nice! I hit 50 on a drive to my ranch recently. Approx 70 miles. Doing speed limits. Averaged about 60 mph. A good portion of the trip was interstate at 70 though. Congrats!
G

I drive on interstate, and then get back into Baltimore for 4 miles or so, so it drops like crazy once I hit the city.

It's very controlled by how smoothly I get through the city, also by whether the commute is more like 55 mph or 70 mph.
D

TheCityGame said:
I got 51 once on a warm day in January.

I drive on interstate, and then get back into Baltimore for 4 miles or so, so it drops like crazy once I hit the city.

It's very controlled by how smoothly I get through the city, also by whether the commute is more like 55 mph or 70 mph.
Click to expand...

I pumped my tires to the max [51psi!] and drove without AC on 85F summer. I drove around 50mph and I got around 63mpg on my 2010 sportwagen. I got in the 70s when I was drafting behind a semi. If I did pulse and glide with very light throttle on the glide [to maximize the glide time] I hit high 70s!
T 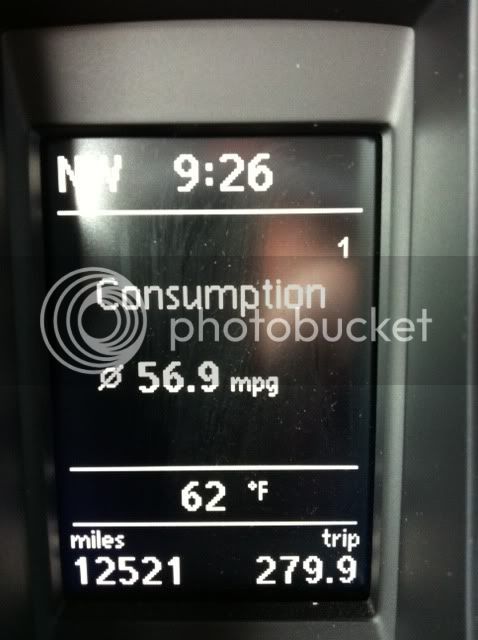 This warm weather is making a huge difference. I set a new record yesterday as well. (55)

Yea my highest is like 42mpg. I do 77 on my 40 mile commute to and from work. high speed kills mileage.

Set your tires to the maximum rated air pressure. Set your cruise control to 55 mph on level pavement on a warm day with no excess weight in the vehicle. If your MFI doesn't indicate 50 to 60 mpg while cruising along, I feel sorry for you.
C

Yeah, you're not gonna get good numbers in S mode!
N

Very nice. I also set a new record yesterday. From my home in the outskirts of Greenville, NC (~2 miles of stop and go before hitting the open road), to Little River, SC (Just north of Myrtle Beach) via Hwy 17 - Averaged 45mph (Brought down mainly by running through downtown Wilmington to grab lunch), and 46.7mpg. My car only has 3k on (Just passed 3k coming home) so it's not even broken in yet. Averaged 42mpg on the tank so far (a couple days of my 20 mile round trip commute, plus the drive home from Myrtle Beach, also), total of 478 miles. According to the MFA I could hit 600 on this tank (just over 1/4 tank indicated remaining), but likely want as the remainder will be all city driving - should get to 580 or so comfortably, which will also be a new record for me.
N

My journey from my tour in Germany

In March, I was apart of a bit of a highway train from Atlanta, GA to Deer Lodge, TN (look 'that' one up on google maps!). It was my wife in her Golf 2.5L i-5 5-spd manual, a friend of ours that drove us down to ATL in his dodge minivan, and myself in my jetta TDI 6-spd manual. I was in the lead, since I knew the way. We all had full tanks of fuel before taking off from the vehicle port in ATL (my wife and I just came back from overseas and were picking up our cars).
So off we went, first stop Deer Lodge, TN. On the way, we picked up some handhelds to keep in communication. All the way, I was hitting near 58.2 MPG, with my wife's golf coming in at a nice 41.? MPG. Our top speed was only 65MPH (the old minivan couldn't do much more than that!), avg speed around 45, because of the mountainous terrain in TN.
As we stopped in Deer Lodge, my friend couldn't stop talking about trading his minivan in for a VW TDI, all the while asking numerous questions about top speed, HP, torque, and comfort. I finally couldn't take the questions anymore and tossed him the key. After an hour long runabout in my car, he came back with a grin on his face that would put the Cheshire cat to shame!
After a few days of going here and there, visiting with family a bit longer, and getting the last few things settled, my wife and I packed up the two cars with our belongings and beloved canine companions (I took one and she took the other, splitting the baggage load to compensate), we took off with tear-filled eyes to Huntsville, AL, where we had a house waiting for us to finally settle down in! As we took off, my wife came across the radio telling me that her fuel light just came on, then asking how I was doing. I told her I was fine at about a half tank left from ATL fillup, but there was a station about 15 miles that she could get some fuel. So as we stopped at the station, she fueled up her little golf and we let the pups out for a jaunt. I couldn't fuel up anyway, since the rinky dink place didn't have a small spout diesel nozzle (only the huge truck version.... hi-flow i think it's called). As we hit the road, I was just curious on exactly how far I could actually get on a tank, so I decided not to fill up until absolutely necessary.
Turns out, we made it all the way from ATL, to Deer Lodge, to Huntsville, all on one tank of diesel fuel. 692 miles total (oh I wished I would have taken a pic of that!), with the running around we did through the Tennessee mountains. a little over 12 gallons to fill it up in Huntsville. I can't remember the AVG speed on the way down to Huntsville, but I know it was higher than going from ATL to Deer Lodge, since we didn't have to worry about a slow minivan breaking down!
All in all, I'm stuck on VW and their TDIs. I'll never again buy a gasoline motored car. Plenty of power, and gradually extending fuel mileage as the engine wears in. You can't beat it! Now, if VW would just bring back the Passat Sportwagen, I'd trade in my Jetta sedan!
Cheers!
N

nico, how many miles on yours? I'm really jealous of that mileage. I know my DSG is hurting some. On flat-and-level road @ 60MPH I'm pulling 51 or 52mpg. Flat as a pancake around here though, which I understand actually hurts mileage a bit, since in hillier country you'd get to spend substantial time engine braking downgrade, not using any fuel at all.
L

How accurate are the VW MPG readouts? My previous car an 09 Honda Fit often said 40 MGP but after doing my own math it was more like 35/36 MPG.

In the Golf Iv'e been averaging 39.4 MPG, but I haven't done my own math on this car yet.
N

Mine reads high. Not 100% sure on how much. Only filled it like 6 times so far, so I'm not that confident on how consistent my fill technique is, which effects hand-calculated MPG. 5-10% maybe?
P

My overall tank mileage was pretty close this time. About 1 mpg off.
B

Who cares about consumption 1? How good do we show with Consumption 2?
M

My readout seems pretty accurate. I double-check with the pump receipts. I'm getting about 38 avg. I have gotten as much as 43mpg on my commute, but that is with a longer route with more hwy. Bad traffic kills the average. As does using S mode.

My first tank in a new JSW DSG showed 35.5 on #2 and calc'ed out at 30.3. So as of now the computer is a guesstimate at best that holds little weight with me until this unit gets broke in and I will check it by hand each tank and see if the gap narrows (which would be nice)
N

Just filled mine today - decided not to stretch it going for 600, which I probably wouldn't get anyway.

No More Buffalo,
Mine is a 2010 Jetta TDI that now has about 22000 miles on the clock. Just had the 20000 mile service done on VW's dime. What surprised me was that right after the service, I was actually getting WORSE mileage! I am going to chalk it up to oil break-in period though.
I'll post a pic of an average reading today when I get home to show. Most of the time when I'm just out driving, I get no less than 52, but if I'm spirited enough during morning and evening rush hour (which is usually the case!), i get about 46-48MPG with 70-90MPH slam-brake/downshift - to full throttle on I565 traffic from Decatur, AL to Huntsville, AL.

Billion003 said:
Who cares about consumption 1? How good do we show with Consumption 2?
Click to expand...

I'm just wondering why his picture has the NOT symbol in window 1? All I have seen is it, in window 2.
N

So here are the promised pictures. I decided to post ALL pics of all data concerning my display and mileage. They are taken the same day, within seconds of each other. Nothing has been modified besides the cropping of the photos and creating a large collage for a bit easier(?) viewing.
Both #1 and #2 are shown along with times and values.
Today I left a bit earlier than normal, so traffic wasn't as bad as it usually is. I just took my time going home since I was in no real rush, and only got home about 5 minutes later than usual. The 60.0 would have been much better if it weren't for very LONG traffic lights I had to deal with!
Cheers!
--John