Story of my trip home from fest

I had a heck of a good time at fest. Sure, it's never fun getting up early, but I really enjoyed heading to the tech sessions and whatnot. However, the story of my trip home from the fest is one that some might enjoy.

I left the fest between 4 and 4:30 pm on Sunday, right around the time that the group picture was being taken. The three friends I brought with me were just coming back from shopping and I was getting tired of standing in the sun and not winning anything at the raffle after spending $40 on tickets - happy to donate to the club though.

We departed for our 8 hour trip back to Ontario. About 1 1/2 hours into the trip, we stopped for fuel. Calculating for the trip there and that leg of the trip back, our economy was 47.58 mpg, which is pretty good assuming about 200 km of city driving. After leaving the gas station, I noticed the car was making a grumbling sort of sound. My initial guess was that perhaps the turbo was on the way out, which made me happy because then for sure I would need to replace it! We continued on with no noticeable effects except the battery light flashing every so often.

There was a lot more grumbling to be heard while going at city speeds through the short stretch of Detroit before crossing the border - didn't want to break down there! We stopped at the duty free shop, and I popped the hood to see if anything was out of place. Sure enough, the serpentine belt which connects to the alternator and the A/C compressor had jumped a channel on the compressor pulley - I did hit a pretty serious pothole on I-75 and that probably didn't help. It was pretty much impossible to move the belt without touching the tensioner and I had no such tools. I called AAA and the best they could do was tow me to the border. Since the side of the pulley seemed pretty smooth, I fathomed it wouldn't get shredded and we might make it home. I also saw petea4 leaving the duty free shop heading back home - noticed him cause of the massive 18" huffs - but couldn't catch him in time for assistance. At that point, I suppose I should have known that the sound eminating from under the hood was more than a loose belt...

We continued on, and pulled up to the customs officer to get back into Canada. The car was still making a ton of noise, so I offered to turn off the engine so that we could hear eachother. After talking to the officer, he let us go so I started the car and we proceeded. We drove about 40 feet, and hear a metallic clang and the grinding go away. My travelling mates saw something go flying into the area after the customs booths so we pulled over and turned the car off.

My girlfriend and sister went out to try and retrieve the part that let loose - it was the alternator pulley. But the customs officers didn't like us running around dodging cars just after getting into Canada - perhaps they thought I was letting out a bunch of illegal aliens right after crossing. Five of them rushed out of the inspection area and confronted me. After explaining the situation, they didn't mind pushing the car into the inspection area where there was more light available. One of the guys knew about cars, and while they had tools there, it didn't seem as though there was anything of good use. One of the officers actually started a quazi-inspection of my vehicle, but at least he didn't open the trunk cause I am sure stuff would have come spilling out. The original officer who let me across the border actually came over and we were chatting/laughing - they all agreed that they had never seen a breakdown quite like this.

After poking around for a while, and realizing that getting towed about 330 km would be $$$, I made the decision we would continue on with no lights on and use as little electricity as possible. I secured the serpentine belt so it wouldn't get worn, and we drove off. Given that it was 11:30 at night, this wasn't the most law abiding decision, but it still seemed like the best option at the time. We went about 170 km before we were stopped by the cops and given a $110 ticket. I promised the officer I would use my lights for the rest of the trip as long as I could, since getting towed from there would still be ridiculously costly.

The car started to really struggle just a couple of minutes from our off ramp. After downshifting and going quite slow, we made it off the highway, but the battery died under 5 mins from my house - go figure. My mom came and picked up my friends while I waited for 2 hours for a free tow from a CAA truck. The tow truck driver had a good laugh at my story.

Total travel time: 12 and a half hours. I can't help but feel that the lack of spark plugs really helped us for getting maximum travel time with no alternator. Also, interstate batteries rock! If it weren't for the cop stopping me, there is no doubt in my mind that we would have made it all the way home. While I am not an advocate of driving with no lights, I drove as safe as possible otherwise and the other options available made no sense at the time. Thinking back, perhaps I would not have been stopped if I tailed a transport truck since at least I would have been seen better. Or maybe I could have said something different to the cop and avoided a ticket. The silly thing about the ticket is that it doesn't really teach me anything...it was still the cheapest and quickest way to get home.

It's been a while now since the fest, but due to the great info on here and Wingnut to borrow tools from, I installed the pulley no problem and she has been running great ever since. To all the rest of you with A3's, heed Stealth TDI's warnings!: 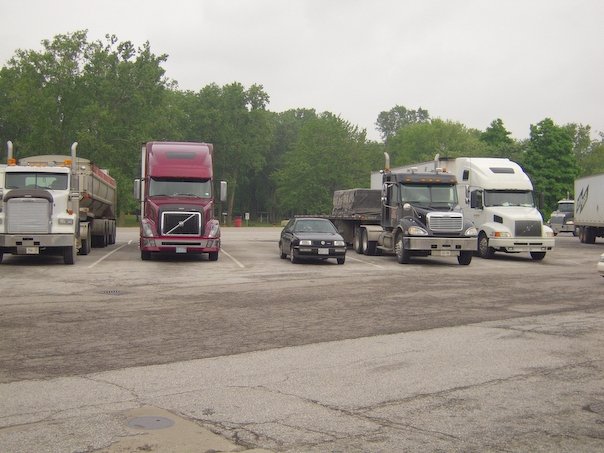 Quite the story Blake. Good to hear you made it back in 1 piece.


blizzak said:
I also saw petea4 leaving the duty free shop heading back home - noticed him cause of the massive 18" huffs - but couldn't catch him in time for assistance.
Click to expand...

That sucks, i was still in that complex for a while. After the duty free shop, i rolled around to the truck pumps to fill up. I would have lead the way with my lights. Maybe swap batteries for a while? Should have thrown a stone, i would have stopped for sure.

S'all good. While I say I couldn't catch you in time for assistance, it was probably a lot my fault too. I thought the car was going to be okay since at the point when I saw you I hadn't lost the pulley yet. Perhaps some of us from Ontario can run route to/from DC next year. I really wanted to organize that for this year but I think I left for the fest earliest out of all the Ontario people.

The thing that really makes me wonder is if I didn't turn off the engine at the customs booth. Would the pulley have stayed on there till I got home? I have to imagine that it was pretty loose through all that grinding on the highway, so maybe it could have lasted the rest of the way. It was an adventure nonetheless. Take care, and good to know I can depend on fellow club members to lend a hand - I just gotta reach out next time!
You must log in or register to reply here.
Share:
Facebook Twitter Reddit Pinterest Tumblr WhatsApp Email Link
Top