what wheels are those??
K

I really want to build those front and rear guards, do you have CAD files or do you have a price to duplicate them? Beetles are cheap so I figure I'll stick with my platform & engine for a few more years until I find a nice AWD unit to swap in.
G

Oh yeah, I also love the pictures of the Sherriff deputies checking out your ride. They didn't give you a ticket or anything, right? Just admiring your car?
C

The deputies were just checking out the car.

No CAD files, just my eye, a tape measure, and a bender. I usually quote people $50 per bend and $20 per weld as a baseline for a bumper build.
C

Any pointers on how you attached the bumpers to the front and rear of the car. I am going to do this on my 04 wagon, just timid on where to mount that won't interfere with the airbag sensors and crap. Also, since it's a jetta platform car, going to probably need to trim the existing bumper to keep part of it as it covers so much of the front end of the car.

Guess I could just do sheet steel as a skin with mesh grate to help protect important parts.
C

The airbag sensors weren't a concern, as this car is a prior salvage and the airbags were inoperable from the day it came into my possession. It has an Audi A4 steering wheel now without a functioning airbag.

I mounted the front bumper on the stock impact absorbing shocks. In the rear, I cut apart the shocks and replaced them with sections of thick-walled 2-inch square tubing, which run deep inside the body's frame rails and bolt in from the sides, as well as utilizing the original flimsy sheet metal mounting points. I heavily gusseted the section between the (former) shock mounting plate and the bumper beam, retained the beam, and used it as a foundation for both the tube bumper and its integral receiver hitch. It's solid.
C

Rad build there! Wish I had access to a welder again, thus wouldn't be such a pipe dream.
C

I don't even consider this a build. This is just a little outfitting of my daily driver.
J

Colin Doyle said:
Hah, yeah right! Hood stack isn't really my style, but if it were I'd rather put it on my most recent project truck: 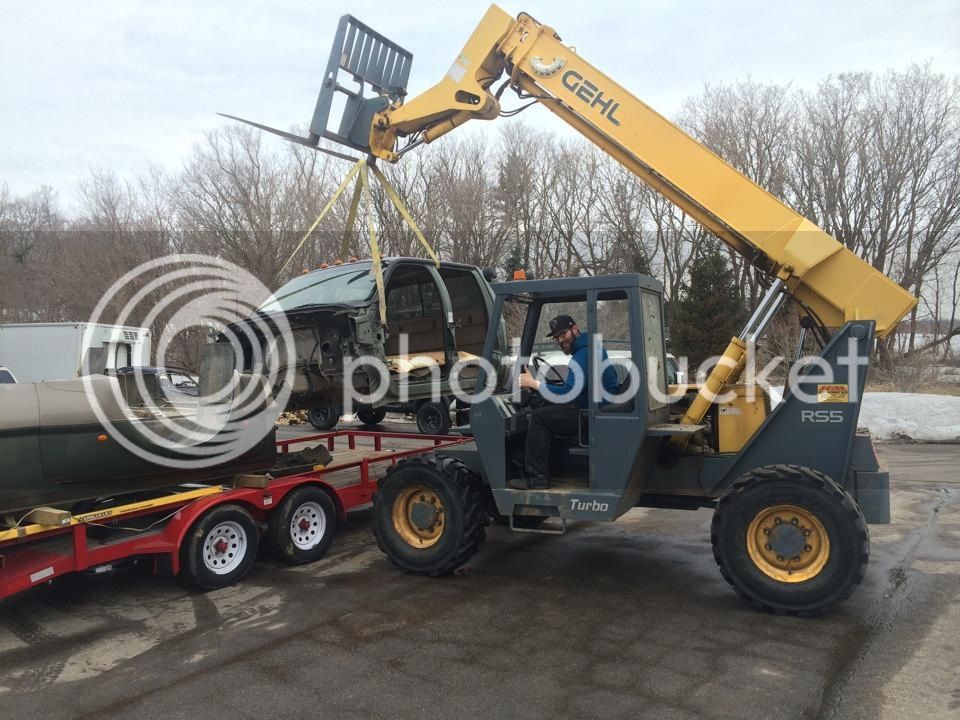 
That's bad ass!!! I used to drive an '11 F-650 with the Allison/Cummins combo. That was a beast!! Does yours have the push button tranny?
Mine was #8, wanted to paint a black 8 ball on it, but they frowned upon it.

No, it's just a normal column shift. The pushbutton shifter for 1000- and 2000-series Allisons is really just a driver for a motor which turns the shift shaft, and doesn't have the diagnostic capabilities of the pushbutton shifters on the larger Allison transmissions.

I just got the F650 on the road this week, actually. I've been daily-driving it while I work a few kinks out of it. Really needs to be geared up a bit - I think the final drive is something like 5.57:1, so it turns 2500 RPM at 72 MPH. Exactly what you need to push a tall van body through the wind with a 200 HP engine. Now that's 300+ HP and cuts a smaller hole through the air, however...
C

This thing is sweet dude, keep up the work.
K

I still want these bumpers!
S

You have some serious fabrication skills. Congrats to you on an awesome looking rig. May I inquire what tire size you ended up with?

I got sick of the constant vibrations from the garbage Bassett steelies, at least one of which had a barrel which was not concentric to its own center bore. Found some 15x7 ET38 OZ gravel turbofans, had them powdercoated silver, and applied new decals to the faces. I coupled those to 38mm spacers to achieve the same effective ET0 offset of the Bassetts. Mounted the same 215/75-15 General Grabbers.

I also revised my lift strategy: I wasn't satisfied with the way the metalnerd-style spacer preloaded the front springs, and there wasn't really any better way to lift the car using the stock strut mount configuration. I got a pair of Mk5 Jetta front strut mounts, welded the Mk4 spring hats to the Mk5 components in order to center the smaller-diameter top coil, and fabricated a simple double-flanged spacer to bolt between the mount and the body. The spacers are about 1-5/8" tall, which resulted in approximately the same amount of lift I had previously. There was some seam-sealer inside the strut towers which needed to be removed with a wire brush on the angle grinder, and then I drilled three holes in each strut tower to match the Mk5 mount's bolt holes. I used the same Moog springs, which are both thicker and taller than the original Beetle springs.

In the rear, I built a quick fixture which bolted to the beam and marked the locations of the spring perches and shock mounts, then hacked those mounts off the beam. I elevated the spring perches about an inch, and moved the shock mounts up about two inches (the longer Moog springs required an unhealthy amount of preload before I was able to bolt in the shocks - even now, they need to be compressed a couple inches.) I installed the beam with new Cupra R bushings, a homemade anti-roll bar, and new Bilstein shocks/struts (all the way around.)

Car rides properly now, and handling is far more neutral than it had been previously. It was hard to get a gauge on the handling with my old setup because so many of the components were completely shot - e.g. the struts/shocks and bushings. It used to understeer badly, but now it holds its line and will lift-off oversteer. Should be fun in the winter!

Oh, also: I recently took this car on an adventure to Texas. I purchased an M1088A1 at Fort Hood, so I built an A-frame tow bar with a lunette ring and affixed mounts to the Beetle's bumper.

A good friend of mine had purchased an M923-series 5-ton truck from a GovPlanet lot at Fort Riley in Kansas, but it had four flat tires. I dragged a little Harbor Freight trailer down there with good spares and a heavy tow bar, dropped it with our guy at the auction site, and continued south to retrieve my truck.

I returned a couple days later flat-towing my Beetle with the M1088, we reconfigured the load, and I got all three vehicles back home to Minnesota. Long drive at 56-58 MPH. Tow bars are fantastic.

This is awesome.
C

Hey, been a while since I updated this.

The Beetle blew its turbo a few months ago, which prompted me to begin a long-overdue engine rebuild. I just got it running last week and am currently tidying up loose ends and working with a friend to get the tuning aspect sorted out. It's good enough to daily-drive right now, and the potential in this build seems very promising.

Hopefully I can be gapping guys' Subarus in my winter beater soon.
N

The user formerly known as mickey

I can't stop laughing. But in a good way, I assure you. That's the single most awesome thing I've seen in a while.

I'm not much of a "new" Beetle fan (prefer the older ones), but this one is unique and looks cool.
C

Thanks. I'm not really a fan of the New Beetle, either. Or the old one. Or Volkswagens at all. Hahaha
P

The bumpers are amazing
How much would you charge to make a front and rear bumper?
C

Probably more than the car is worth, unfortunately. It's not really economically viable to produce bumpers this elaborate for other peoples' cars, but I can dump a ton of time and energy into my own stuff and justify it to myself as a learning experience. I don't think I'd be willing to build another front bumper/skidplate combo like this for less than $1200, for example. Hard sell in a world of $300 mass-produced Chinese Jeep bumpers.

The engine build, for anyone interested, has been holding up very well. Despite having gotten fairly deep into modifying engines in my past, I've never actually rebuilt a car engine before (just tons of powersport stuff - jet skis, lawnmowers, ATVs, scooters, sleds, etc.) This rebuild has clocked about 14,000 miles so far, and it's taken me out to Vegas for the SEMA show and to the top of Pike's Peak with little drama. There is still a lot of power to be coerced out of the tune, but I've been so swamped lately it's been difficult to set aside time to work on it.

Additionally, I performed some rust repairs on the car before my road trip to Vegas this year. I swapped the hood for a clean one and cut out the rocker panels, replacing them with .120-wall square profile steel, then finished them with UPOL Raptor and resprayed the rockers and quarterpanels. I have a ton of photos of the process, but I'm not even sure if any of these Photobucket links work anymore. Click here for a link to the public album on Facebook.
Last edited: Feb 4, 2018 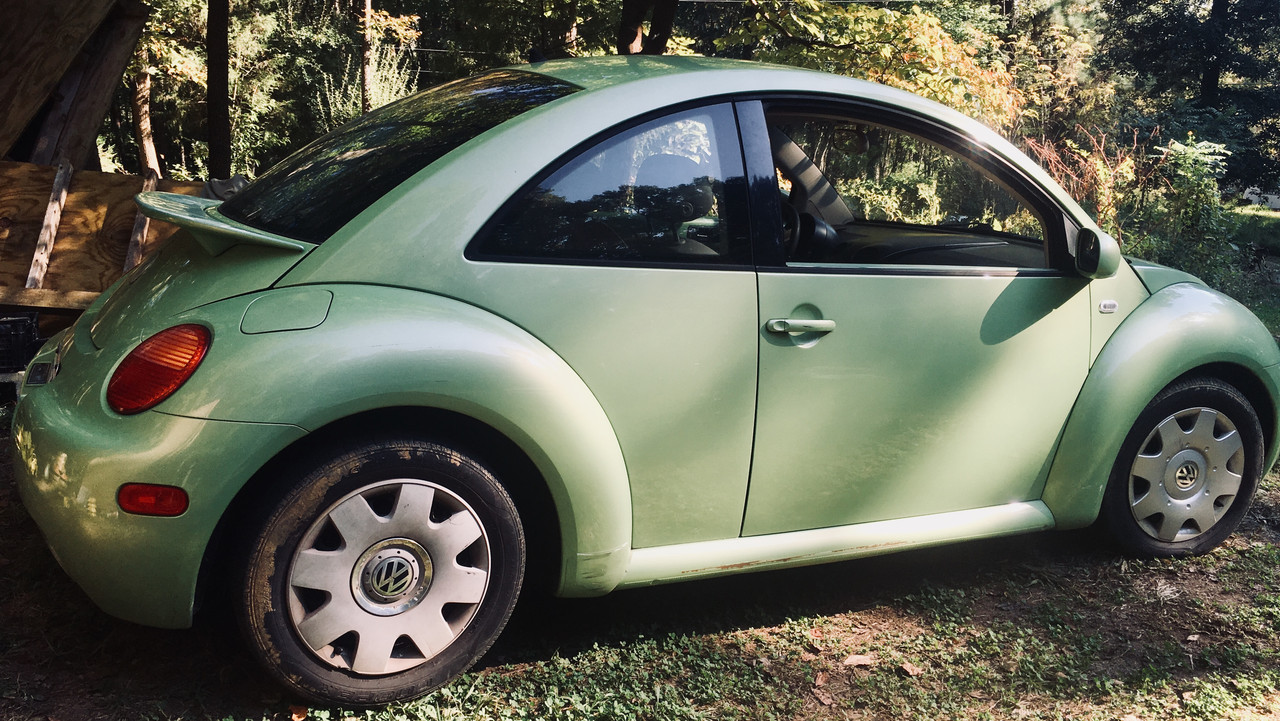