Where to mount Scan Guage II

I want to mount my scan guage and make it very vissable to me. I have tried a few places but nothing I'm 100% happy with, where are you guys mounting them?

Get some velcro at the hardware store and mount it on the steering column. Works great for me.

Got mine on the steering column with the supplied velcro. Not entirely happy with this location, but there's really no good spot that I can find...

I've got a thin strip right above the radio in my car. If I can get a replacement piece for when I sell it, I'll cut a hole in it and run the wire up that way. The SG is too wide to actually nest in there, but I need to be able to get the wire into it through the back. Too bad, if the opening was about an inch larger it would go inside. If it works, I'll snap a pic. For now, mine is on the steering column, but it's a pain to reach the buttons. 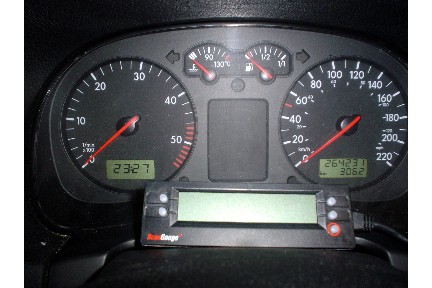 been happy with it here for me

I've got mine on the ashtray door cover (closed). Easy to see, kind of tough to select buttons-gotten used to it. Connected in the back port and stuff the cord into the joint between dash and counsel making it well hidden. Oh, it's in a 2001 Jetta. 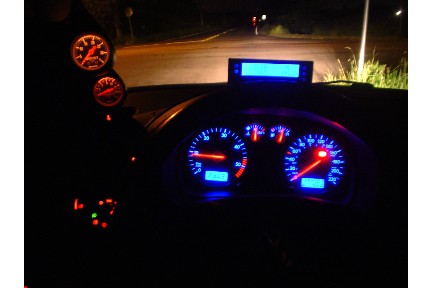 hmm well I tried this tonight as I was driving around getting my oldest to get to sleep, not to sure how much I like it but seems to be ok for the moment

The problem with a mount like that is the warning about the heat from sunlight, othewise I would have done the same thing.

Thanks guys I have it sitting ontop of the steering column. Now I just have to play with front to back on the column for better visibility.

Got mine nestled between my pyrometer on the left & boost gauge on the right sitting on top of my steering column . On the B4 Passat the OBD II plug is just above the car key on the column .

This is the most visable spot, but works. Dash space is so limited, ya know? Couldn't put mine right above the radio since I have the cupholder there, so I moved my rear defrost button over to the left and velcroed it to the two empty buttons. I left the right most one off for the scan gauge rear connection. 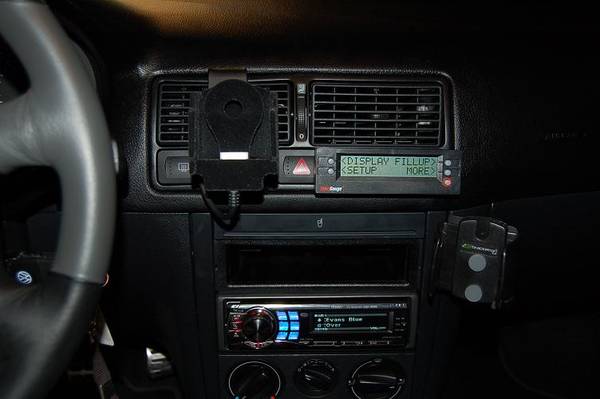 just ordered mine so I haven't tried this yet, but how about on that little mini-visor above the rear-view mirror? Cable might not be long enough to thread, though

Honeydew said:
just ordered mine so I haven't tried this yet, but how about on that little mini-visor above the rear-view mirror? Cable might not be long enough to thread, though
Click to expand...

That's where mine is - I'll post up some pics later today or tomorrow.

I took the screw out and turned the visor around so it flips down toward the windshield instead of down toward the mirror (hope that makes some sense?) then flipped the visor down and velcroed it to the part that screws to the head liner. This way the mini visor shades the SG from the sun. The only downside to this is that it's a little hard to read it since you're not looking at it straight on, but I think that's the case any where you mount it that far to the right of the driver. It's readable, just not quite as sharp/clear as it is straight on. I've had it here for a few days and like it. I got a 10 ft network patch cable and a female/female connector from RadioShack. I'm going to run the patch cable from the scangauge, under the headliner, down the A-pillar and to the OBD2 connector. The Scangauge cable will then be coiled up right there and plugged into the female/female connector and OBD2 port. This way I can still take it out easily for use in another vehicle without having to undo all of the hidden wiring.

It will fit up to the mini visor with the cable that comes with it, however you will have a cable running across the dash near the headlight switch and down to the OBD2 port.

No good place to put it 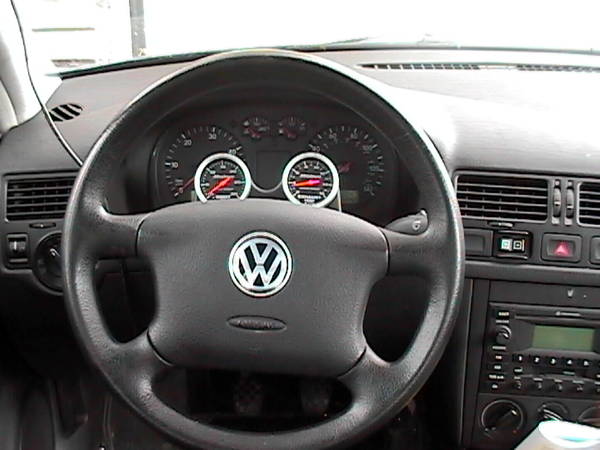 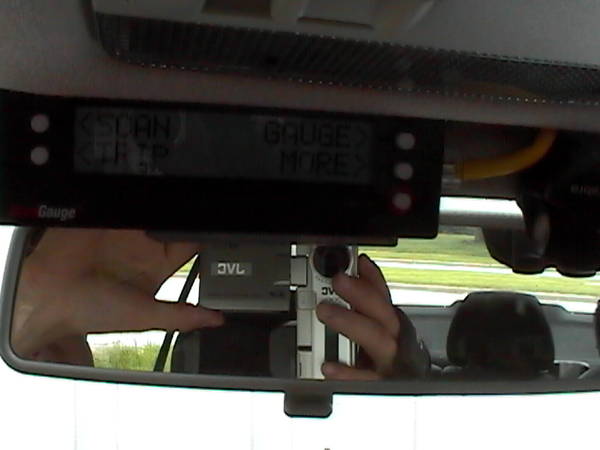 Drivers Side Side View 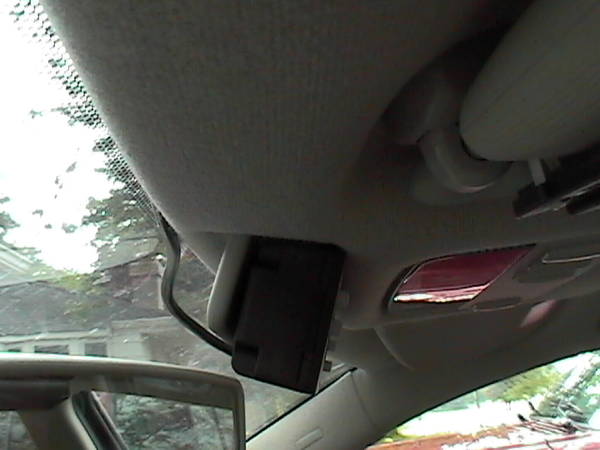 Passenger Side Side View 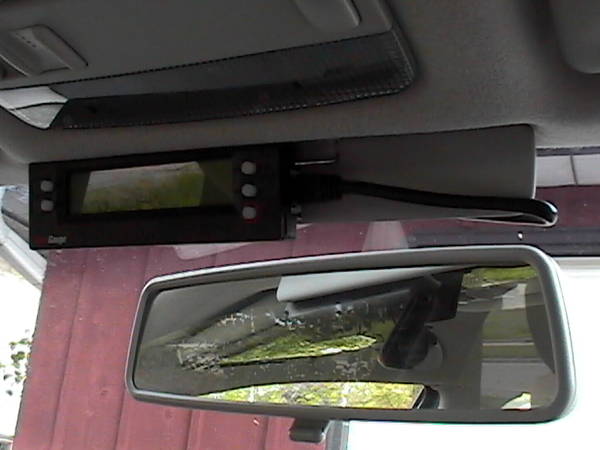 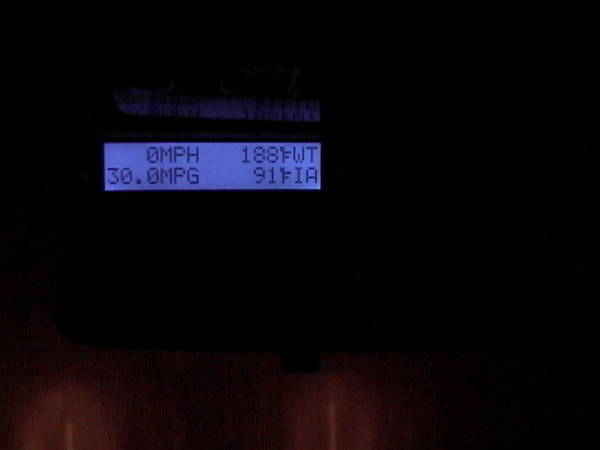 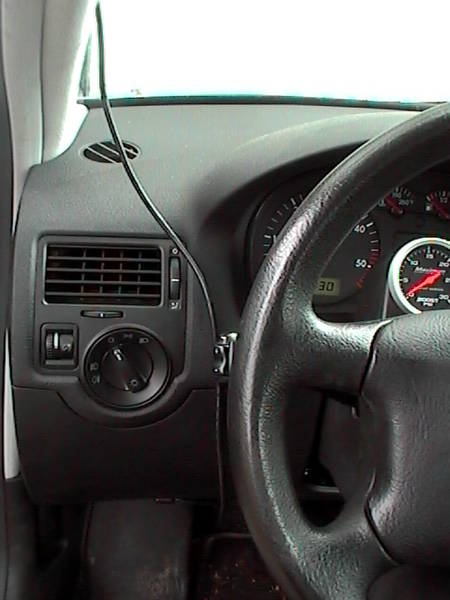 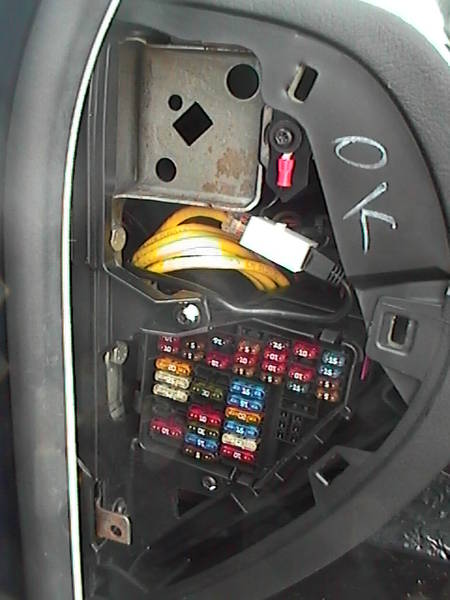 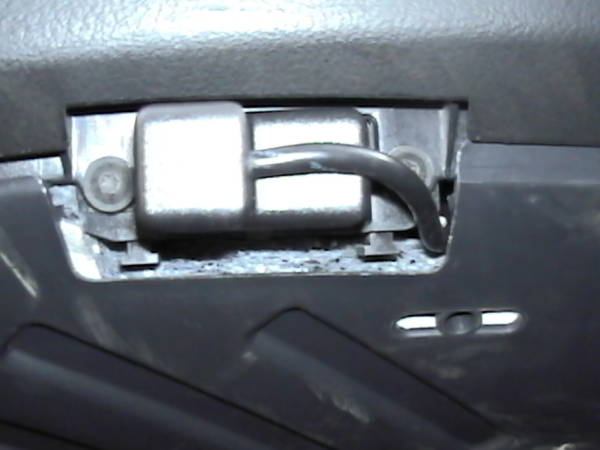 Sweet. I'll go pick up the cables and do the prep while waiting for the box to arrive!! That location is the best option for me since the column has only a single-gauge pod mount.
Last edited: Jun 2, 2007

One thing I'd check before using any cable not from Linear Logic.
Network cables come in two configurations. Straight and flipped.
However you look at the contacts at the clip (just be consistent) make sure you that contact one stays contact one at the end of the line.
For example, look at the Scan Gauge cable's clip with the contacts facing you and lets call the contact on the left contact #1. Assemble your extension cable (with female to female connector attached). Now find which contact in the female connector will connect to the contact we're calling contact #1 on the Scan Gauge cable. Now connect your ohmmeter to the contact in the female end and MAKE SURE you have continuity with contact #1 at the end of the extension cable.
Worth checking IMHO to insure nothing gets damaged (ECU or Scan Gauge)

been happy with it here for me
Click to expand...

This is where mine is too! I like it there. Protected from direct sunlight, and hard to spot in the car.

Probably with VAG-COM. Changing to the British display uses 24 hour time and miles on the odo/trip meter.

/EDIT. Yup since I use 24 hour time myself, having my car display it too was a nice change.

Bob_Fout said:
Probably with VAG-COM. Changing to the British display uses 24 hour time and miles on the odo/trip meter.

/EDIT. Yup since I use 24 hour time myself, having my car display it too was a nice change.
Click to expand...

WAs married to a flight attendant for 6 years and just got used to using the 24 hr clock . Wish we had it as an option without having to futze with the things settings .

To address the cable issue raised by danEboy, it seems like the standard radio shack Computer Network Cable will work? Hope so, that's what I bought. Thanks for posting the description and pics.

yeah I changed it with vag com, pretty sure it's somewhere on the ross tech site.... can't remember where though.

Honeydew said:
To address the cable issue raised by danEboy, it seems like the standard radio shack Computer Network Cable will work? Hope so, that's what I bought. Thanks for posting the description and pics.
Click to expand...

Oh, Forgot about the cable issue. Yes, DanEboy is correct. Any standard "patch" cable will work - these are very pouplar and easy to find. You don't want a "crossover" cable, which is not as popular (it's used to connect two computers directly to each other).

I made a custom panel from a Radio Shack project box for my A3:

My only gripe is that the OBD port on the A3s is in plain view next to the ashtray:

I still need to Dremel the trim piece to fit over the OBD port to clean it up at least a little. Perhaps I'll relocate the OBD port someday. But I doubt it.

I put mine above the steering wheel on the dash as in post #7. It is good there. I would have put it on the steering colum, but it would have blocked out the indicatorlights down there, and I dont want to do that. It does go dark due to heat if parked in the sun. I figure I will just put a folded piece of paper on it to fix that, but havent done that yet. If I park int he shade its not a problem. I am not 100% thrilled with the location, but it seems to be the best option for me and my 98 TDI.
Rick

I have mine on top of the steering colum also but I like the way that above the mirror looks I may moove mine. Everyone keep in mind the manual recomends to keep from direct sunlight or it could be damaged from the heat.
so taking that into consideration I like the above the mirror mount even more.

The velcro that is supplied with the SG failed on me (actually the adhesive that sticks to the visor bracket) and it let go after about a month. Before I decided where to put it, I put both pieces of velcro on the top of the SG - only the right most one does anything though since the visor bracket is not full width of the visor.

I'm pretty sure that if one of the velcro strips was put on the top of the SG and one on the back so that it was supported on 2 sides I wouldn't have had a problem.

I got some "auto" velcro from the hardware store that claims to stick really well to vinyl and is for car use and put that on the visor bracket (it also matched the visor color better than the black that came with the SG. So far so good (been 3 days). If that fails, then I'll put it on the back side as well.

Hope that helps someone
H

Fix_Until_Broke said:
The velcro that is supplied with the SG failed on me (actually the adhesive that sticks to the visor bracket) and it let go after about a month...(snip)
Click to expand...

Mine failed also, I bought a pack of velcro ultra-mate spots (home depot) and put two on the top and three on the back. A bonus to doing the back for me is that the gauge is now angled into a more easy-to-read position than before because it is flush with the mini-visor. 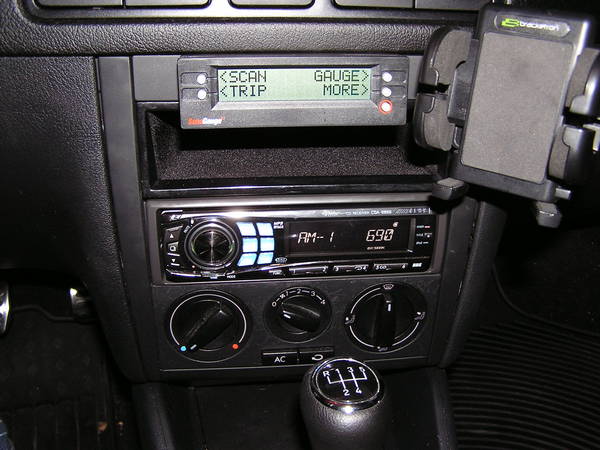 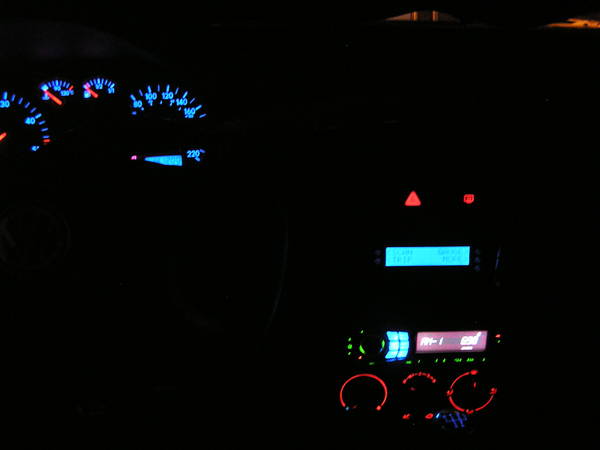 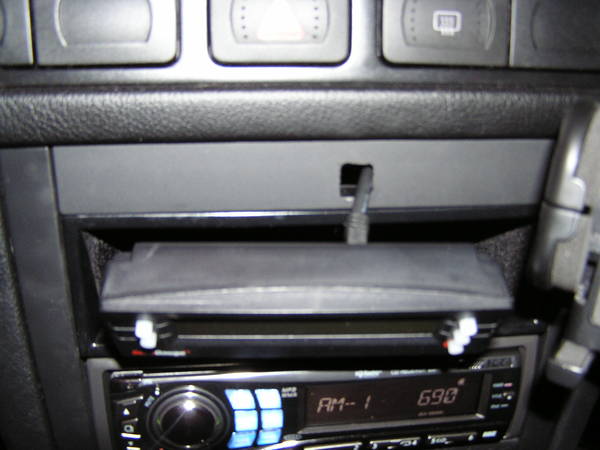