What did you do to your MKIV today?

BakoTDI said:
Yeah, I’ve seen them do it, been there with them. I didn’t see the leaks either!!! I’m at a loss. 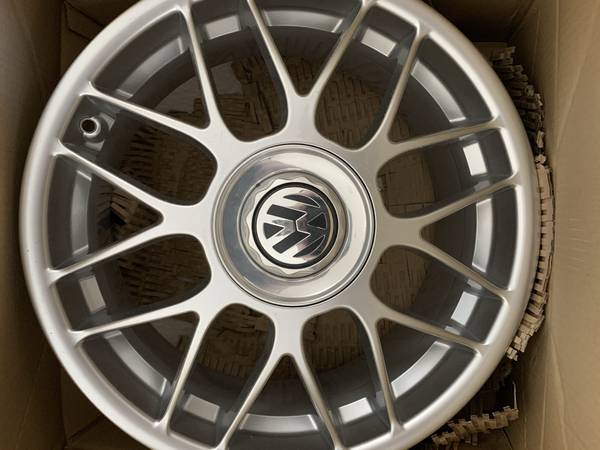 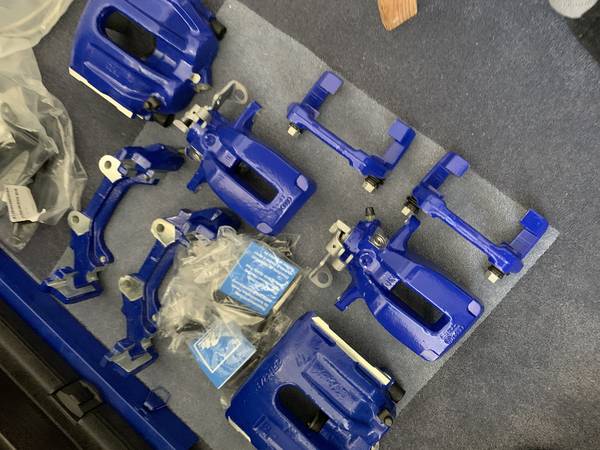 Who did you get brakes from? How much?

I started using an online parts shop in the Czech Republic called oemvwshop.com over a year ago and they have been great. I have found stuff from them that I couldn't find anywhere domestically, including my local dealer. Even though they're in Europe, most shipping costs are usually pretty reasonable for normal size/weight items, around $35 for DHL Express. The total cost for all of the brake parts was $2000 not including the rotors and brake lines. I comparison shopped, and this saved me $500-600 dollars compared to a shop like ECS or the dealer. I got OEM rotors from ECS for another $500 along with the special spacer you need to attach the rear carriers ($25.) I made this decision because the shipping costs for the rotors from OEMVWShop due to their weight would have canceled out any savings. You could probably find 3rd party rotors for less. Darkside made me a custom set of brake lines for $65 (the R32 connectors for the front calipers are different.) I already had 337/20th Anniversary brakes, so I didn't need the rear rotors or splash shields.

That's using the site he did and getting the GREAT deals on the front calipers and carriers. Which look to be a sale price, not an every day price.
https://www.oemvwshop.com/1j0615123e-brake-caliper-housing-volkswagen-golf-1j-p573328/
https://www.oemvwshop.com/1j0615124e-brake-caliper-housing-volkswagen-golf-1j-p573330/
Keep in mind the R32 front set-up requires higher priced front rotors as an ongoing maintenance.
The MKIV platform offers a few different front brake set ups 280mm, 288mm, 312mm & 334mm. (the Audi TT MK1 shares the last 2).
The first 3 use the same caliper, just different carriers (the 280 carrier being fixed to the knuckle) and the 334 (R32/TT 3.2) set up uses a 2 piston caliper. Blue as shown in the pics above.


Rears fall into 2 groups
232x9 solid
256x22 vented
There's a different carrier for the 256x22 rear caliper when used on an AWD car, and as mentioned above, spacers can be used to allow the AWD caliper/carrier set-up to be used on a FWD car.


There are TONS of brake options for the MKIV (& TT MK1) platform, the question is what's your priority? How much do you want to spend?
M

To increase the size of the front brakes the first thing you would have to do is replace your front "knuckle". The MKIV TDI and 2.0 (gasser) comes with a 280mm front set-up with the caliper carrier fixed to the knuckle. Once you do that, you're open to most all the front options I mentioned above, plus you also open up to a few aftermarket and other OEM calipers with adapters. But these still require the knuckle that supports the removable carrier.

Some like to swap the knuckles and go for the 288mm rotor/caliper & carrier set-up. This is commonly referred to as the 1.8t/VR6 set-up, as it came stock on most 1.8t & VR6 MKIV's. Some variations of the 1.8t (& the TT MK1) came with a 312MM front set-up, which was the same knuckle (different for TT) and caliper, just a "taller" carrier. This is probably the 2nd most common (the 334mm/R32 set-up benmarks went with is fairly rare, due to price and used market & future rotor prices).

Another option is the 1.8t/VR6 knuckle, the 312mm rotor, adapters and Brembo 4 piston calipers (fronts from the Porsche Boxster non-S).

That doesn't cover all the options, but touches a few of the more common front bigger brake options using mainly OEM parts. There's a HUGE thread over on VWVortex that goes into detail on many more options.

For the rear, it's typically the "vented rotor" caliper and carrier, that support as the 256x22 rotor. Some of the 1.8t MKIV (2oth AE, 337, later GLI, etc.) used these, so they bolt right up to the MKIV TDI. If you get the vented rear caliper with an AWD carrier, ECS makes a set of spacers that run about $25-30 to offset the caliper/carrier combination enough to allow them to be used on FWD car.

There are also some more aggressive options (280 or 288, using the MKIV smaller front rotors, but need a daters and then you get into e-bake cable stuff, blah, blah, blah) for the rear too, but this is the most common "bigger" rear.

I had rounded up soooooooooooooooo many different pieces over the years, even 18z's at one point, but now have a TT with the same set-up benmarks showed (expect not blue & no rear bracket/spacer) and just don't see me doing anything except possibly going for a lighter 2 piece rotor set-up ... once I use up all my spare parts.

Nero Morg said:
Helped a friend adjust his iq after he tried to do it without VCDS.... Changed it from 14 to 2... Because his stupid butt wanted to roll more coal.... Smh guess it's a good thi g it's his car.
Click to expand...

Dang! He must be zooming now!

Our 2002 wagon has had intermittent limp mode for a while with the charge negative
deviation code. I ran the operational N75 test and got zero vacuum after the N75.
The vacuum pump pulls down to 25" Hg so that's not it.
We'll see if a new N75 does the trick when it shows up next week, courtesy of IDParts.

Hmm, perhaps I should have one on hand just in case?

Nero Morg said:
Spare n75 and a 109 relay are always nice to keep in the trunk
Click to expand...

If not, what is the correct VW part number for the PD 109 relay?

As far as I know, they use the same relay. The gray one is the updated part and last a long time compared to the bulkier black 109 relay.

Thanks. The picture on the IDParts site seems to show the black version so I sent them an email asking if they have the gray one.
I

Black versus gray no longer matters. We do our best to get ones from Euro suppliers, but they are all the same design now.

Just rolled over 350k km, passed some adventure big rig camping truck thingie and as I pulled by there was this crazy loud shuddering sound. Thought my flywheel exploded but turns out that truck had his exhaust pointed right at my passenger windows since it was lifted to the moon. (Think Dakar rally support truck) yikes.

On another note I kind of ordered a new car, 2020 Subaru Legacy Limited GT (XT for you Americans).
It's time for more amenities and AWD. Will still keep the Jetta and possibly do a 2260 of some sorts in the future, it'll be my really fun car.

Finally ordered a new fuel cap because the lanyard on my old one broke. Also finally took the time to figure out how to hang the cap properly on the fuel door. Simple yet satisfying. Shouldn't be breaking any more lanyards anymore

KrashDH said:
Finally ordered a new fuel cap because the lanyard on my old one broke. Also finally took the time to figure out how to hang the cap properly on the fuel door. Simple yet satisfying. Shouldn't be breaking any more lanyards anymore
Click to expand...

romad said:
Does the 2002 Golf have a bracket on the fuel door?
Click to expand...

The fuel cap should have a couple notches, and that should allow the cap to sit on the door.

I was finally able to get to replacing my front driver lock module. Removal went well until I realized that the tab that runs along the top edge of the door card snapped off! Ugh! This was a JY find that repacked my original one which was super flappy after the same tab broke off. Now I have the door card sitting in my garage clamped up waiting for the epoxy to cure and re-secure the broken tab. I’m hoping it takes and the lock module replacement cures my alarm going off at random hours of the day AND night!

RexNICO said:
The fuel cap should have a couple notches, and that should allow the cap to sit on the door.
Click to expand...

OK, then it is like my Jetta. I didn't understand the comment about figuring how to hang the cap as mine just clips on the door using 2 of the notches with the lanyard cap connection 180 degrees from the door. Any other position of the lanyard connection puts strain on the lanyard and its body attachment point.
K

romad said:
OK, then it is like my Jetta. I didn't understand the comment about figuring how to hang the cap as mine just clips on the door using 2 of the notches with the lanyard cap connection 180 degrees from the door. Any other position of the lanyard connection puts strain on the lanyard and its body attachment point.
Click to expand...

Correct. I had never even noticed the notches prior, and had just let it hang from the lanyard while fueling. Until 1 day it broke. Then I put it on the pump after that while filling.
When I looked at my new one I purchased, I saw the notches. Both old and new caps had them, just never even thought to look on the cap itself. My Cummins cap hangs by a spot welded bracket on the inside of the door. I had the truck before the car, and the TDI is the first car I've owned. Just cool things I guess I notice along the way.
A

I only drove the car twice so far after having the tires put on an it seems quieter and a little less peppy but I guess that's understandable because of the higher effective gearing.

unfortunately I haven't driven anymore because my starter went out and I'm waiting for a new bosch replacement to come in tomorrow...

Oh I forgot, I had tire pressure monitoring system installed along with the new tires ....

I wanna drive bad to see about mileage before I install the 3" turbo back exhaust and brm intake manifold .

To anyone opening up the AC: You're going to need to replace the receiver drier and if your car is old and corroded like mine, it's going to be very hard to get the top bolt off that connects the receiver drier to the condenser. Do yourself a favor and just pull off the lock carrier as shown in this video: https://www.youtube.com/watch?v=HkiwMq02Dhc
It's not that hard and it'll give you a lot better access to that top bolt.

IndigoBlueWagon said:
Black versus gray no longer matters. We do our best to get ones from Euro suppliers, but they are all the same design now.
Click to expand...

It's a bit confusing because they do not have "109" on them. Just "Mahle" and a part number.