What did you do to your car today?

Reinstalled my oem steel skidplate for the first time since i put my new FSDs on the car. I had misplaced my rubber mount bushings for it and finally decided to man up and just buy 3 more. I feel MUCH better with my armor underwear on.

I fear no Ice chunks now.

I will be removing it probably tomorrow when I replace my sway bar bushings. and put on the 10mm front spacers. they are quite clunky. hope thats all it is.

A couple days ago, but I finally a bunch of much needed work done... sadly, I didn't do it, as life keeps getting in the way. The good news is that I found a great TDI Mechanic local to me that knocked out a bunch of stuff over the weekend:

Big thanks to Matt-98AHU for the wrenching and fast turn around and for Growler for sending me his way. Now I can start saving pennies for some rotors and bushings... while I gently break in this clutch.

White Jetta - Installed nearly new VNT-17 and used but good 2.5" 304 stainless cat-back w/magniflow muffler - purchased from fellow club member. The orginal VNT-15 has 207,000 miles and was still OK, but replacing it now seems to me to be good insurance. My RC3 ASV seems to work fine with the 17.

Gave the Golf the old Diesel Purge Medicine!! One can through the engine, poured the remaining dregs in the tank. Will do two cans with every filter change now I think.


Ready for the dyno tomorrow!

Did it do anything good? can you tell a difference?

Turned 5000 miles accelerating through 80 MPH on a freeway on-ramp.
D

Installed a steel OEM skidplate on my wife's 2010 Jetta Sedan.

Great pdf on the process.

Marin (jetta ,97) did some eprom magic yesterday. Now the Jetta is alittle closer to being an Audi.. Thanks Marin!

You may notice the boost gauge is missing, I ordered an Autometer 5670. Should be here in a couple days. 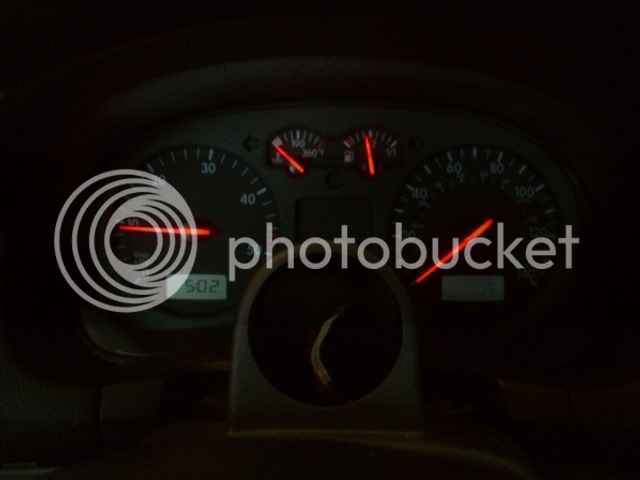 Good News, and some Tragedy Averted.

This weekend, I was able to install my new (used) Doniol Boost/EGT gage. That wwas the good news,.. the gage is AWESOME. Altho I do have a questin about it that Ill ask on the Doniol gage thread...

anyhoo, to the tragedy aversion..

Mcnally is already spoken for, its going free to a good home of a friend. I couldnt sell it. he wanted it, its his.
After the Cinci TDI GTG when I slowed down from the freeway I noticed much more lifter ticking than the single tick I have had for the last year or two.
I carry a cam & lifters on the shelf... they got replaced after checking my oil level and finding it spot on where it belongs.
in the process of doing that job, I was unable to get the pump pin to seat fully into the pump, and it was a bit wobbly in there where it could go into. looking thru the pulley with a mirror didn't look right. so I pulled the pump pulley.
I found this.. 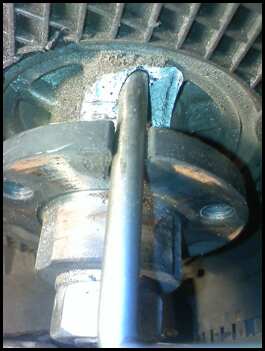 when taking the pulley off, I heard the tinking of metal chunks and once it got close to coming off, I could hear them fall... into the timing belt path.. yippeee..
after much disassembly, I found these pretty little nuggets, whats left of the broken casting pieces after about 40k of wear from the last timing belt job. 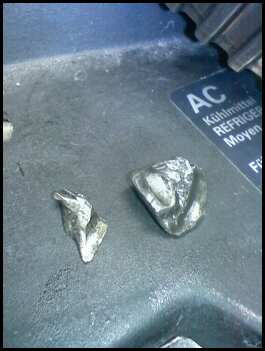 also noted was the wear marks on the inside of the pulley. 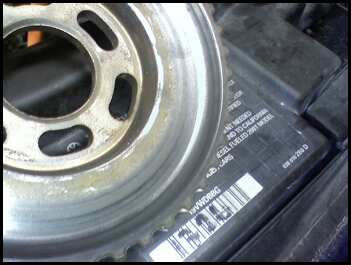 In addition to the issues above, the Crank seal was leaking, and the large roller had a 60k bearing in it.
these two things made me decide to just replace the TB system as well as the crank seal. IF the roller was replaced at 102k like the PO told me it was, it had 40k on it, either way, it was manufactured in 2005 some time, so it was almost due by years anyways.
guess I got lucky, and am VERY glad I pay attention to the sounds my car makes.

Ahh, broken nose on the pump. Thats why the OE and metalnerd pump pins are hollow and have a breakaway spot. Someone cranked over your motor with a pin in there at some time.... and probably not an actual pump pin but more likely a drill bit or something....

Getting the final things in order for the upcoming 5 speed swap and had a "discussion" with my Dad who will be giving me a hand. He was asking about whether I have a new pilot shaft bearing/bushing or not. I do not, nor have I ever seen discussion of one here. Doesn't the input shaft just hang out there on the main input shaft bearing? '99 02J trans btw.
K

Almost all done, but I hooked up my ALH Wagon with ...

It's pretty nice. Thanks to the guys at DJM out in PDX for doing a lot of the work, btw. 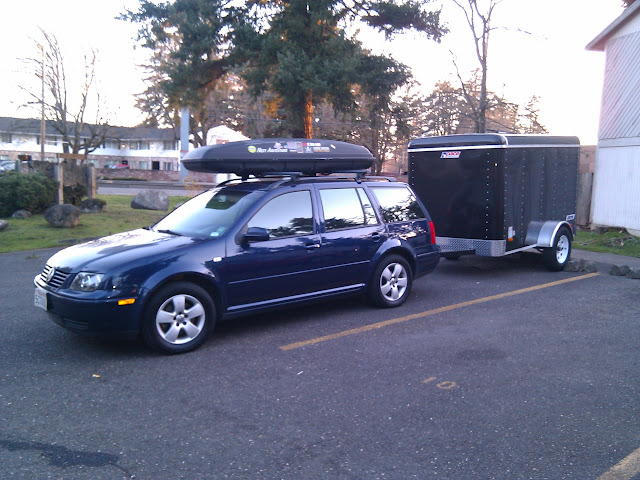 Yesterday was intake manifold day for my car, 2003 A4 ALH Golf 5mt. My wife and I cleared out 45k miles worth of short trip slow driving sludge from the previous owner. I couldn't get my pinky in the intake manifold once we had it off the engine block, and the car wouldn't go over 3k rpm even rolling down a hill in 3rd gear. Now she breathes!

If you question your ALH A4's ability to merge on highways, you owe it to yourself to tackle this project. You won't be disappointed.

On a side note, if you're borrowing or swapping intake manifolds with someone who has a spare, check that all the threaded fasteners fit in the new part BEFORE you bolt the borrowed part to your engine block . . .

Otherwise you'll get really good at placing hex bolts with a mirror and quite a hamstring workout.

No really, if you have an ALH and you're lacking power, I'd put intake manifold first on your list of things to look at.
A

Don't know about other markets, but US Jettas don't come with standard Splash Guards. $200 for front and rear and installation at the dealer. Well worth it!

adeep42 said:
Don't know about other markets, but US Jettas don't come with standard Splash Guards. $200 for front and rear and installation at the dealer. Well worth it!
Click to expand...

Put some 3M clearfilm under the splashguards where they touch. If you dont you'll be cursing those things in 50k when they rub right thru the paint.
E

Stripped the injector hold down bolt threads in cyl 1 Also inspected my cam and found that most injector lobes were very sharp and had zero chamfer on the edges... FML LOL.

--edit-- apparently, the injector rocker lobes DO have sharp edges so it's not that big of deal I think. Somebody correct me if I'm wrong though.
Last edited: Feb 24, 2010

Farfromovin said:
Stripped the injector hold down bolt threads in cyl 1 Also inspected my cam and found that most injector lobes were very sharp and had zero chamfer on the edges... FML LOL.
Click to expand...

Even with the special oil you were using?!

Yeah, I'm not the original owner so who knows what some crazy German was using prior to me? LOL.
D

I confess, I have never rubbed an injector lobe, despite quite a few cam inspections.

But I would NOT worry about the injector lobe's having sharp edges. The roller feature of the injector rockers eliminates any edge contact ability. So a sharp edge cannot be from wear, and it will not rub a hole through a lifter.

Any hints and tips for the rest of us on how to avoid stripping injector hold down bolt threads? I will be doing this job next week.

DanG144 said:
I confess, I have never rubbed an injector lobe, despite quite a few cam inspections.

But I would NOT worry about the injector lobe's having sharp edges. The roller feature of the injector rockers eliminates any edge contact ability. So a sharp edge cannot be from wear, and it will not rub a hole through a lifter.

Any hints and tips for the rest of us on how to avoid stripping injector hold down bolt threads? I will be doing this job next week.

Here's a tip, don't use a m6x1.00x55mm grade 12.9 bolt. It's too short! I think a 60-65 mm would be a better fit. I got those dimensions from another thread here and although it was shorter than OEM, it seemed "ok" at first. Until the torque wrench just slipped So now I get to stack recoils, should be fun tonight

I torqued my head bolts.....finally....maybe my car will run again this year....

New Bosch Micro Edge wipers, replaced worn out RainX's.
$10 each @ Auto Zone. The Bosch Micro Edge's were made in Belgium, the Bosch ICONS made in China and double the price. Maybe the ICONS are a better wiper but Belgium gets my money this time
You must log in or register to reply here.
Share:
Facebook Twitter Reddit Pinterest Tumblr WhatsApp Email Link
Top