From dirty-banana yellow to shiny-silver in a matter of only 30 years.


Clinton Wilson takes one last look at his old diesel VW Rabbit before driving off in his brand-new Touareg at Family Volkswagen of Bakersfield on Tuesday morning.


Tehachapi resident Clinton Wilson's yellow '77 Rabbit has won the oldest diesel Volkswagen in America contest, and in return he gets a six-month lease on a new silver Touareg V10 TDI and a $500 gas card to drive it.


He's first driving to Lancaster to show his father-in-law, then he's off to Vegas, "Frisco" and ... the world.


"This is where I get to be a little kid at Christmas all over: Don't touch it!" Wilson plans to instruct his friends.


He bought his '77 Rabbit from a neighbor who was selling it for some cash to send to his son in the service.


The new car only gets about 20 miles to the gallon "if you keep your foot out of it," according to VW public relations manager Keith Price, who was at a Tuesday event at Family Volkswagen of Bakersfield. But man it's fine: Leather interior. Power seats. Bowel-loosening 310 horsepower V-10 diesel motor. It smells like new car too!


The hoopla comes from the 30th anniversary of VW in America. There was also a contest for the diesel VW with the highest mileage in America. Some guy in Ohio received that honor.


Wilson has been asked to blog about his experience, and VW will show his old diesel Rabbit around the country.


The new car is being leased, not given, to Wilson so he can have it completely free, no taxes or fees.


"This is a press fleet vehicle," Price said. "We're loaning it to him under the same auspices as Car and Driver Magazine."


This is the first thing Wilson has ever won. He plans to keep his friends from messing with the car, and may not let them eat and drink inside.


"I might even make them take their shoes off," he said, grinning.
J

Thought this was interesting:

If VW really wanted to find the oldest diesel, they could have had one of their programmers write a script to pass VIN numbers to Carfax until they get a hit...

Hahaha! I am laughing at the "bowel loosening" remark about the T'reg's engine! Bet that guy never had that problem in the 48hp Rabbit!
H

he's not going to drive it far with that gas card

At the end of 6 months he gives the Toureg back? 3 years? Does he get to keep it for good?

That's really going to suck having to give it back again. The least they could have done is give him the Touareg.

So who won the most mileage award and what was it.

Nice! Though, I was under the impression that the person got to keep the Touraeg... ***... I've parked under that sign many a time buying parts...

VWoA are frikkin' idiots! They unknowingly are showing how good their product WAS, and by implication how bad it IS.

uberdiesel said:
At the end of 6 months he gives the Toureg back? 3 years? Does he get to keep it for good?
Click to expand...

AND, will he get his Rabbit back

AUBURN HILLS, Mich. – Volkswagen of America, Inc. announced that, as part of its diesel heritage search, it has located the oldest operating Volkswagen diesel vehicle in America, a 1977 Rabbit owned by Clint Wilson of Tehachapi, Calif. The Rabbit's was recently verified by Volkswagen of America and Family Volkswagen, a Bakersfield, Calif. based auto dealer. 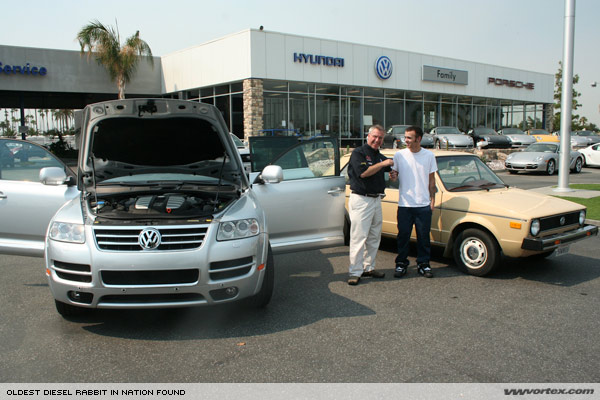 “Diesel engines are noted for their long-term reliability and durability, so we didn’t think it would be a problem to find a 1977 Rabbit that was still in great condition, like this one,” said Steve Keyes, Volkswagen Public Relations Director. “The entries for the oldest (and the soon to be announced highest mileage search) not only represent cars that were well-built and well-maintained they are also interesting stories from people who are passionate about Volkswagens and diesel.”

In recognition of owning the oldest Volkswagen diesel in the U.S., Volkswagen has provided Wilson with a new Touareg V10 TDI to drive for six-months. In addition to his 1977 Rabbit, Wilson also owns a Beetle that he is hoping to restore in the near future.

Volkswagen is a leader in the U.S. diesel passenger vehicle market with over 815,000 diesel vehicles sold since the 1977 Rabbit, the first U.S. Volkswagen diesel. In addition to the currently available diesel Touareg V10 TDI, Volkswagen has previously announced that the 2009 Jetta and Jetta Sportwagen, which will be available late first quarter of 2008, will feature a clean diesel TDI engine.

I just realized that it HAD to be a lease. I don't believe the V-10 meets the CARB standards, but by leasing it through Michigan, they bypass that little technicality.
What? Now VWoA are pretending that the tailpipe emissions vanish from the sunny CA skies to magically appear in the Great Lakes region?

Lug_Nut said:
I just realized that it HAD to be a lease. I don't believe the V-10 meets the CARB standards, but by leasing it through Michigan, they bypass that little technicality.
Click to expand...

I knew there was some fishy reason behind the lease, and rightly so I also suspected that CARB standards had something to do with it.

The whole time before the winner of the contest was announced, I pondered why the TDI being offered as a prize wasn't a Jetta. I figured that VW would want to push the diesel offerings of their passenger cars to link the TDI engines to the 30-year-old Rabbit engines. When they said Touareg as the prize, I was willing to accept that VW wants more publicity of their T-reg just to try and sell more SUVs. But then the lease thing started nagging me. To give away a Jetta TDI wouldn't cost much. Heck, to give away the value of a T-reg TDI would amount to a clerical error to a big company as VW. But then the answer hit me - the winning car very well might be found in California. Even if the new TDI would be a give-away prize, I'm sure that it couldn't be registered as new in California because of the CARB restrictions. Probably couldn't be registered as new in any of the other states that accept CARB restrictions to their auto fleets.

I don't know how VW jiggered the lease to make that beast of an SUV acceptable to drive in CA, but maybe photos will surface to confirm my suspicions - that SUV might have Michigan license plates because VW leased the SUV to themselves (some corporate address) and then just carted it to CA to loan the winner for the next 6 months.

As I understand it, if he had won it as a prize he would have had to pay income tax on the full MSRP of the vehicle. Just like winning on a game show. Do you think he could pay in the neighborhood of $30K in taxes when he bought a car for $2k?

VW did the right thing with the lease. Maybe they'll renew it in 6 months for a longer term? Time will tell.

I personally really don't understand the prize. To me its a Rodney Dangerfield prize. Give me a Jetta TDI, where you can have creature comforts and get nearly the economy of the old Rabbit, now that would be a prize.
D

Could it be a 6 month lease with terms stating a $1 buyout?
S

Who knows, they could be 'going over' his rabbit right now and making it good as new

I'm not as optimistic as you... lol


compu_85 said:
Who knows, they could be 'going over' his rabbit right now and making it good as new

Aren't we looking a gift diesel-horse in the mouth? It's a nice, inexpensive to all parties involved, publicity rich gesture by VW that just happens to get the small diesel engine mantra that we've all been spouting for years out to the unwashed masses. As a bonus it's going to probably the least diesel friendly state in the union. It seems to be a win-win situation to me. Viva diesel! Congrats to the lucky winner!

I'm just saying-why does VW have to be such cheapskates with a 6 month lease? Why not a 4 year instead?
W

i would have taken a moment to ponder the luxury of driving around for 6 months in that rap-superstar Toureg, then jumped back into my dirty banana yellow '77 rabbit and drove off realizing i'm the coolest dude around
C

That guy was foolish to surrender the car for 6 months of leased nothing. I would have told VWoA 'no deal.' Or they return the 77 Rabbit after the lease is up.

I was at a dyno day today. One of the other attendees works at a local VW dealership. Someone in San Diego traded in a one-owner 1979 Rabbit diesel with 189k miles. They gave him $650 against a new Chevy Aveo, the guy I met bought it from the dealership for $800.

The body is perfect -- absolutely no rust anywhere. The paint is still excellent -- kind of a metallic brown/brass color, still shiny after all these years. No cracks in the dashboard, no cracks in the taillight lenses... the exterior plastic trim is faded, of course. The driver's seat was torn, the other seats were fine.

The car is just waiting for a 1Z TDI engine and a 5- or 6-speed tranny -- or maybe just kept as stock.

There was also a Mk2 GTI there that cranked out 417 whp.
G

did anyone notice in the photo above of the guy getting the car on the dealership there is logo for vw, porsche and friggin hyundai dealership, what scum could possibly lower themselves to sell that garbage next to our beautiful sometime german some times south american built machines of complexity.
You must log in or register to reply here.
Share:
Facebook Twitter Reddit Pinterest Tumblr WhatsApp Email Link
Top