Updated! TONS of people looking for B4 parts, Revkev is parting one out!

I went over to see revkev last night to drop off a cluster so he could diagnose a flashing coolant light on the B4 he is keeping. The other one, his 1996 daily driver for many years, has too many issues and is leaving next weekend to the crusher. I only just learned about it last night. The car has rusted through floor pans, a bypassed heater core, and was hit too may times to count (but always repaired), often with new parts.
He has said he is keeping some parts off it for the other one he drives but most of it will be leaving since he needs the space. As such I mentioned people wanting parts and he said they can make him an offer on some if he wants, but he doesn't have the time to pull them as his daughter is getting married right off and he needs to prepare. So far he has told me he's keeping the cluster, alternator, ECU, starter, harmonic balancer, timing belt kit he just installed, and injectors. He said he needs to keep his other one going for 2 more years until he retires so the parts he's keeping are somewhat minor. The other one has more rust around the windshield so it's also on borrowed time.
I would like to add that I do not have a ton of time to pull parts either. I am quite busy with a lot going on trying to sell a house, buy another, deal with full time work, and then trying to keep my wife happy. As such I will pull parts, package them, and ship them out (within reason) for people but I won't do it for free. The car is 8 miles from where I live, in his garage.
If you need parts, let me know. Kevin said he is not looking to make a ton of money off the car and it has to leave in 1 week, but is willing to accept offers if people want something. If someone wants the whole thing he is willing to let it go, CHEAP and would prefer someone can use it, but the car is in Waldoboro, Maine. I have done a TON of work on this car over the years and it ran well and always returned over 50 mpg. I understand there are many parts that are NLA and that people need, which is why I am posting this.

These photos were taken last night, so it's as it sits currently.

TONS of people looking for B4 parts, Revkev is parting one out!

How much for the:

• Side Markers
• Antenna
• Back Emblems
• Radio Bracket
• (And possibly) Radio Itself
• Radio Harness (if it’s not annoying to get out.)
• Driver’s Window regulator (if it works) w/wiring.
• Horn
• Sunroof Plastic (The thing that’s lets light through/pull back the sunroof)

Please and thank you!

How much for the intake flex hose and the red n75 vacuum line?

jhax said:
How much for the intake flex hose and the red n75 vacuum line?
Click to expand...

The red hose you can probably buy locally and I’m not sure what shape his are in. Probably just cost you shipping.

I think his fenders were new, but aftermarket. I’m not sure how to get any of those larger items to you, they’re pretty big and I don’t have the means to package and ship them.
B

I need the front passenger window glass with the metal lifter attached. Is it available?

Almost1 said:
I need the front passenger window glass with the metal lifter attached. Is it available?
Click to expand...

I was hoping a shipping carrier

Abacus, did you sell your B4?

I am looking for both front marker lights - the ones next to the headlights.

My B4 has not sold yet. I’m going to relist it multiple places this weekend.

Revkev is not having the car towed away this weekend, so I will try and get there Sunday afternoon to pull the parts. There is a quite a list and I am not sure as to what I can fill since I don't know exactly what he is keeping and what he isn't, but I will do what I can.
B

Yes, thanks for the effort

So, I grabbed what I could for people here, but there is still a ton left. He still has the car and hopes people would want more from it. He's willing to give it away to someone if they can use it. It has a good running engine and it mostly complete. I've done most of the work on it over the years so I know the car mechanically and it's in good shape. The floorboards are rusty and it needs a heater core, which is why he's letting it go. He has another B4 he's keeping some of the parts for as spares, but he doesn't have room for the whole thing.

What is not available:
Front marker lights are being kept by Revkev
Radio is aftermarket
Rear emblems are gone but I know where there is another set. It has no trunk lid.
Alternator
Starter
N75
Harmonic Balancer
Injectors
Door handles (I am re-keying them for him, to use as spares)
Cluster

I still need to grab the inner door handle parts.
Window glass, although shipping is a concern
Sunroof shade

The vehicle was hit some time ago and repaired, so it has many new parts on it, including fenders, hood, grill surround, etc.

This is as the vehicle sits now. 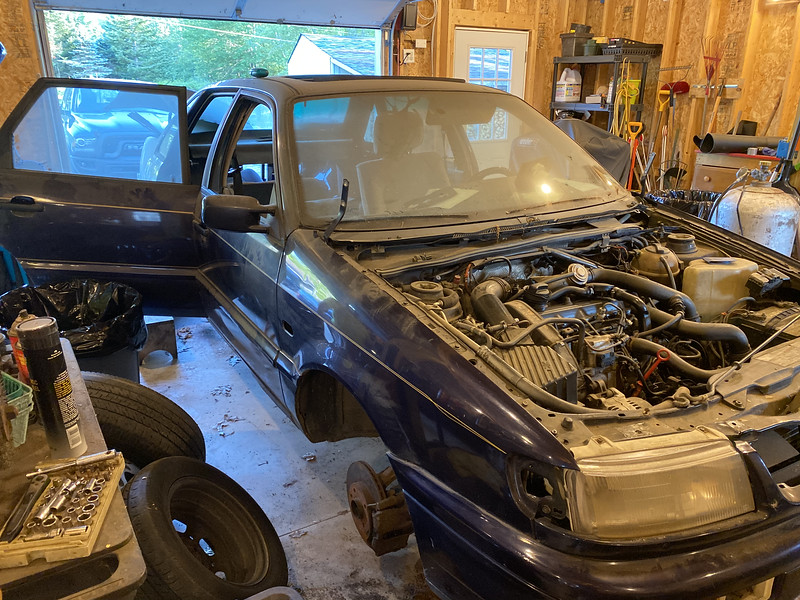 Any triangle interior corner window trim pieces, looks like the right front might have been repaired from one of your first pictures? Assuming that if the door handles are staying, so would any good door handle gaskets?
If no one is interested in the front grill surround, a spare wouldn't be a bad thing to have in an area where wildlife encounters are common occurrence.
Interior trim piece that runs across the back window? Sunroof motor cover? Would you know if the lower radiator hose is the original or maybe slightly newer than my 24 year old one?
P

Looking for the clips that hold the front seats to the rails, if they're still kicking around!
G

I'm late to the party but if the strip fuse holder on the firewall or the brake proportioning valve are in good shape, I'm interested.

Fuse strip holder (coolant glow plugs) is smoked on both his B4’s, sorry.

I think the proportioning valve is ok.

What about the wiring to the light in the AC? Mine is charred.

Also the reverse switch? The things connected to the shift linkage.
(Sorry don’t know the correct term for it.)

alaskansnail said:
What about the wiring to the light in the AC? Mine is charred.

Also the reverse switch? The things connected to the shift linkage.
(Sorry don’t know the correct term for it.)

Sent from my iPhone using Tapatalk
Click to expand...

Should not be a problem.

I'd be interested in the steering wheel sans airbag.

Not to make extra work for anyone but seeing the B4 seat tossed in the trunk reminded me of this:

Anyone running a Mk3 should consider the B4 seat bases, they are more adjustable than the Mk3 ones, especially the passenger side.

Just the wheel or the whole column?

Anything else you need?

Just the wheel Abacus. I think I have a spare airbag which if I ever needed, It'd be game over. That would be a hobby stopper lol.
J

I’d be interested in a spare set of lines from the pump to injectors and a 3 position headlight switch w/o fog lights. Send me a message, if either are available.