Since i've been asked so many times about this here are some measurments that i took to several turbos ,please feel free to add then ones not listed
gtb2260vk audi version 3.0 tdi 233/240 bhp:
intake:
inducer: 44.5mm
exducer: 60mm
AR 45
exhaust:
inducer :50mm
exducer:45mm

Someone make this a sticky

yep very useful info i was wondering what the differences in the 1756 and 2056 vk's were, most said seemed identical but one held boost easier . at least now i can see what makes them tick
J

Does these measures apply for the 170 PD as well ?
Can it be made into a hybrid with 56mm intake ?
I

I'm not sure....but if i'll find the pd version i'll measure it.

K.I.T.T. said:
Someone make this a sticky

And add a few more of the popular choices.
B

this is also useful

GT1749VC and GTB1756VK exhaust housings are interchangeable. Even tough the turbine wheels are different size the housings and CHRAs fit both way around. But if you chose VK you will need to change it to vacuum actuator.
I

A real shame there is no compressor map available for most (all?) of them...
I

Looks like quite a small compressor inducer & turbine inducer compared to other GTB2056's.
R

Not the same compressor A/R?

Yes indeed, compressor wheel is the same part nr as the volvo one.


Alcaid said:
Not the same compressor A/R?
Click to expand...

Larger area for the Alfa one, not that interesting for performance though.

@dieseleux: Do you have the turbine inducer size of the Volvo GTB2056 ?

In table format for you. Couldn't get image any bigger:

run away from this prehistorical turbo, no need that laggy nonsense

I thought it might be helpful for people to understand the effect of compressor selection criteria like exducer diameter, trim and A/R ratios. This has been long overdue, so here goes.

Below I compare maps from the same manufacturer with same technology and change only one parameter at a time. I am not at liberty to share more than what's already presented below, so don't ask.

First, I compare the effect of changing the exducer diameter, while the trim and A/R ratio are kept the same. I look at 46, 49 and 56mm compressors of the same generation and family respectively in the following 3 pics: 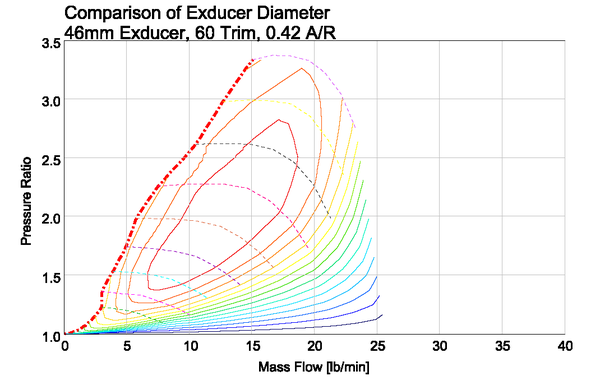 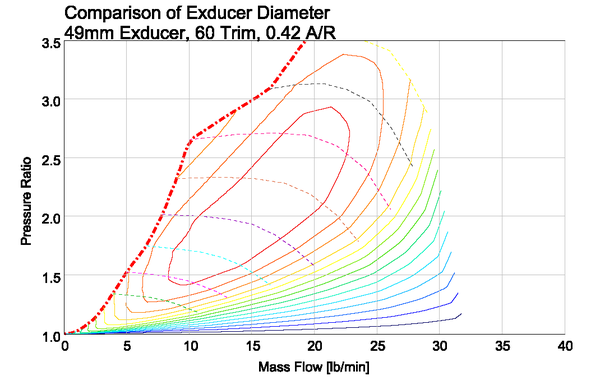 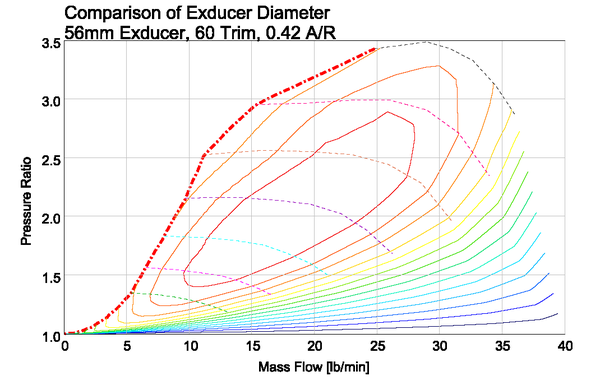 Increasing the exducer diameter moves the entire map toward higher mass flows. The surge line (in bold red dash-dot) also moves to the right. The achievable pressure ratio does not change much because it is not a function of wheel diameter alone but rather the tip speed, which is proportional to the diameter multiplied by the angular speed, and blade properties. Although the lines of constant RPM are not labelled, a smaller wheel must turn at higher RPM in order to achieve the same pressure ratio.


Next I look at an entirely different family of compressors and vary only the trim. I look at 44, 48 and 52 trims of the same exducer diameter and A/R ratio: 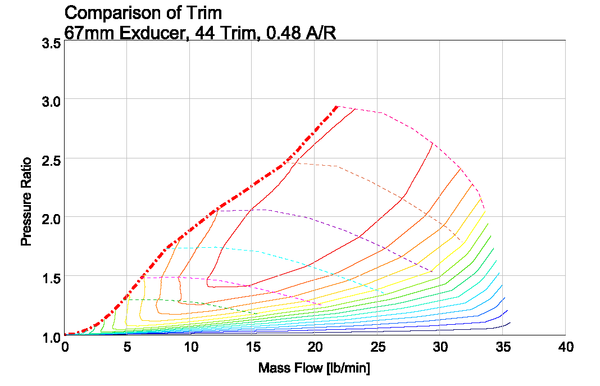 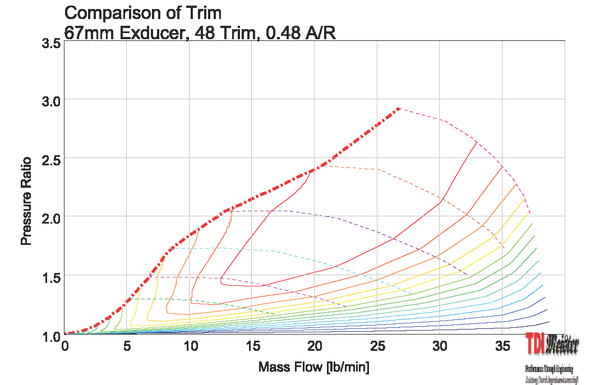 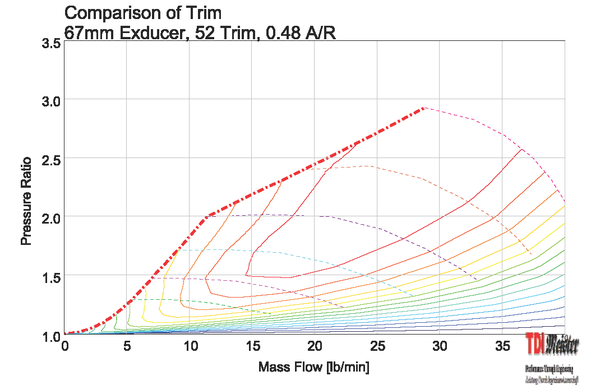 It is apparent that as the trim increases, the map shifts over to the right toward higher mass flows, including the surge line.

One may observe that the upper boundary of pressure ratio is actually lower in this family of 67mm compressors than the smaller compressors previously presented. There is nothing to be interpreted or concluded by this alone, since the compressors in this latter comparison are from a different family.

One may also observe that the 56mm, 60 trim compressor flows almost the same as the 67mm, 48 trim unit, plus the former allows a higher pressure ratio and significantly better surge margin. Why is that so and in light of this, why would one choose the larger compressor and not select the compressor just based on trim? Well those are good questions. The first obvious answer is that this illustrates that a bigger turbo is not necessarily better. Within certain limits the engine developer can select between several different exducer diameter and trim combinations that give the desired flow capabilities. Recall, however, that the smaller compressor wheel will need to spin at higher RPMs in order to achieve the same pressure ratio, therefore the turbine must also be suitably matched with the compressor and the engine! A larger exducer diameter will also have a higher moment of inertia, which will affect turbo lag.


Varying the compressor A/R ratio has little effect on the compressor map, as can be seen in the two maps placed side-by-side below. The same generation, family, exducer diameter (52mm) and trim (55) are compared with two different A/R ratios - 0.53 and 0.45. They both look almost identical. 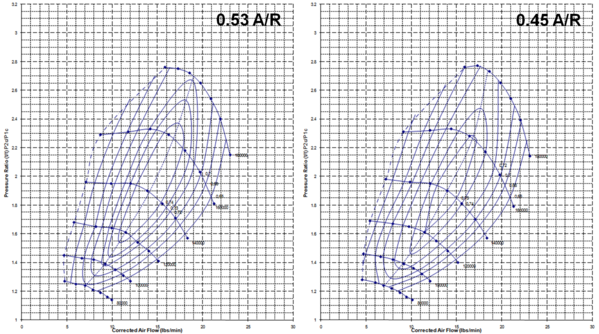 TDIMeister said:
Varying the compressor A/R ratio has little effect on the compressor map, as can be seen in the two maps placed side-by-side below. The same generation, family, exducer diameter (52mm) and trim (55) are compared with two different A/R ratios - 0.53 and 0.45. They both look almost identical.

So what actually changes by varying compressor A/R? Looks like the one with lower A/R actually would be able to produce a higher PR still very efficient if it had'nt been for the RPM limitation.

The two particular maps showing different A/R ratios are too similar to draw any hard conclusions between them. However, when a choice is available, smaller A/R compressors -- other parameters being equal -- tend to be deliver slightly higher pressure ratios for a given shaft speed and mass flow. But again, the differences shown above are practically negligible.

What about the hot side? Any maps to show the effect of changes to the A/R on the turbine side.