And another one falls. 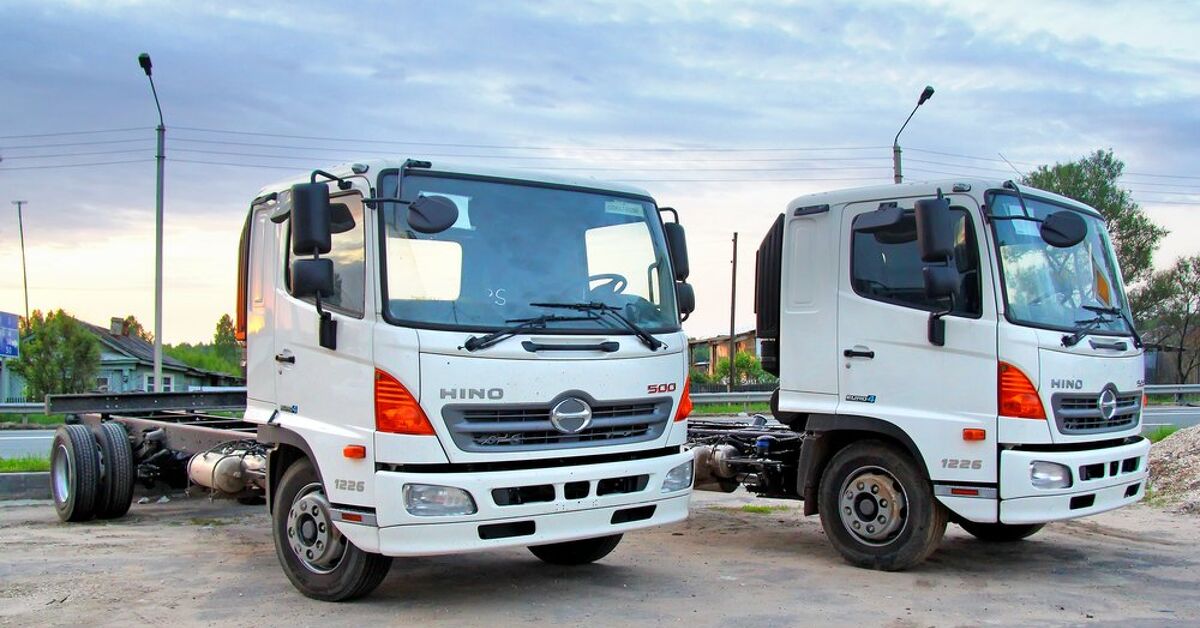 A few years ago, you couldn’t sneeze in an elevator without it landing on at least one automotive executive in trouble for diesel emissions cheating. Following Volkswagen’s diesel emissions scandal in 2015, regulators around the globe smelled blood in the water and the feeding frenzy began...

Couple years ago Hino set up a U.S. assembly plant and with much bravado proclaimed they would soon be selling a whole line of medium trucks with their own Diesel engines in North America. Then, nothing... Finally a year ago Hino fessed up that their engines couldn't meet the U.S. emissions standards and they'd be offering Cummins engines instead.

Must be why Kobelco excavators are switching from Hino J05e and J08e's to Yanmar diesel engines.

Once again, I will state the obvious. If you enter into a contract with a 13 year old to purchase a car, it does not matter how perfect the contract is, it is null and void and not legal. When you make standards IMPOSSIBLE and you KNOW it is, it is also considered null and void and predatory. The emissions standards for diesel were lowered way too fast and by too much. They knew this and did it anyways.

Yup.That's what happens when you have politicians setting the standards instead of engineers.
J

peterdaniel said:
Once again, I will state the obvious. If you enter into a contract with a 13 year old to purchase a car, it does not matter how perfect the contract is, it is null and void and not legal. When you make standards IMPOSSIBLE and you KNOW it is, it is also considered null and void and predatory. The emissions standards for diesel were lowered way too fast and by too much. They knew this and did it anyways.
Click to expand...

turbocharged798 said:
Yup.That's what happens when you have politicians setting the standards instead of engineers.
Click to expand...

I don't think it's as simple as that. Europe pursued similar tech (DPF at least) earlier than the US. US focus on NOx is more intesive than Europe's due to CA smog/ozone issues mainly, but Cummins and others (Detroit, Volvo, Mack, PACCAR, Ford, GM, etc) proved it was all achievable. And industry/"engineers" were in fact very much at the table and providing input during development of the regs. The standards were ambitious for sure, but they were intended to drive the introduction of new technology, so they had to be ambitious. It wasn't meant to be easy, but it was far from "impossible" and the success of those manufacturers that hit the targets proves that case. If the "engineers" were in charge of setting all the emissions standards we'd probably still be using Quadrajet carbs and leaded fuel and mechanical P7100 injection pumps on our diesels, LOL.

Were there some who failed to make it to market successfully, or concluded the cost benefit didn't pencil and decided not to try? Sure. There were those who got into trouble due to poorly thought out technical strategy (CAT, Navistar being examples) and then after a few terrible years and/or violations, decided to leave the on-road market. Then there was VW, FCA, and others whose AECDs were either defeat devices or right on the arguable line, leading to cheating violations. And apparently Hino now in that category as well. But for every mfg that failed or gave up, there were others that succeeded.

Was/is there some pain for consumers dealing with new technology as it worked its way towards maturity? Sure. Expensive DPFs, SCR system issues, oil dilution, etc. But worth it in the end and the technology now 15 years later generally works well, even as complex as it is.

I think it's mostly just a matter of economy of scale with medium duty manufacturers choosing to give up and spec a Cummins powertrain. Cummins' whole game in the market is to be the leader in US emissions compliance. They have worked hard on that and done such a good job getting their products there that it just makes more sense for vehicle OEMs to buy their engines than try to market their own, in a medium duty world where the sales numbers just aren't that high. Why would Hino go through the trouble of certification, then, stocking spare parts, technician training, etc, when Cummins has a strong alternative? Buyers also like the fact that they can take their Hino truck to a Freightliner/etc dealer to work on the Cummins engine or get parts... that's a selling point for many folks, especially since Hino's sales network is mostly clustered on the west coast. This expands their appeal and reach.

15-20 years ago there were a lot of engines out there in the medium duty world. Cat, Navistar, Cummins, Hino, Isuzu, Nissan UD, Mitsubishi, and more. Nowadays, almost no matter what truck you buy in this size class, it'll have a Cummins. A Class 5-6 International, Mack, Kenworth, Peterbilt, Hino, Freightliner..... a B6.7 Cummins is the only choice you'll find available in EVERY SINGLE ONE. The only alternatives are the GM and Ford medium duty chassis which use detuned versions of their PSD/Dmax V8 pickup truck motors (cost effective because they are certifying those anyway so no need to go to Cummins), and I think Isuzu and Mitz still have their own engines in their chassis as well (?).

Kind of a shame in the case of Hino because the J08E was a sweet engine, better NVH than the Cummins has, and it was good to see something different available. Anytime a market gets so consolidated like this it's a loss to the consumer in terms of choice. But I understand their decision on a $ economic basis.

peterdaniel said:
Once again, I will state the obvious. If you enter into a contract with a 13 year old to purchase a car, it does not matter how perfect the contract is, it is null and void and not legal. When you make standards IMPOSSIBLE and you KNOW it is, it is also considered null and void and predatory. The emissions standards for diesel were lowered way too fast and by too much. They knew this and did it anyways.
Click to expand...

So I take it the cheating manufacturers are the petulant child in your analogy? The standards may have been difficult, but clearly weren't impossible to meet. As evidenced by the manufacturers who were able to meet them.
D

Yeah, right, the poor manufactuers didn't have the capability of understanding the industry they were getting into and were the victims of predatory actions by the EPA which conned them into marketing engines that violated the law. LOL!

Sorry, no, those standards were published years before they went into effect and were the product of development with tech they knew was achievable successfully. And they were right, as experience now shows. Yeah some manufactuers had disastrous failed attempts at compliance (or broke the rules in bad faith), and some others chose not to try. That doesn't mean the rules were illegitimate or impossible.... just that it took some effort and skill to reach them, and it weeded some weaker efforts out of the marketplace. Well, welcome to the real world.

Everyone knew the rules of the game and had the choice whether to play or not, and with what level of honesty. Nobody got tricked or bamboozled.
Last edited: Aug 4, 2022
G

In heavy trucks in this market I suspect every maker except Daimler would be better off buying Cummins X12 instead of building small volume 11 and 13 liter engines of their own, but fat chance they will.
D

Cummins is no angel, they were caught in 1998 AND 2016 cheating emissions. Because it was a North American company it was given a slap on the wrist. Twice.
D

Agreed on that. FWIW the 1998 cheating case did involve pretty much every other MD/HD diesel mfg as well.... they all got penalized, more than just a slap on the wrist. They had to introduce EPA04 emission controls a couple years early as their penalty IIRC, right?

@gearheadgrrrl Probably true. I was working at PACCAR in emissions compliance/powertrain engineering back around the time they were first bringing the MX11 (10.8L) to market. It seemed like a sweet little motor, but I never really could understand why it made sense for the company to go through the effort of cert, marketing, production, aftersales support, etc of that 11L engine when it was so close in size to our existing MX13 (12.9L). You could get many of the same ratings from either engine, there was a ton of overlap between the two motors in available HP ranges. Even worse, the two engines had completely different architecture and no shared parts so it was a heavy lift on the training and aftersales side, none of the techniques or parts from the MX13 carried over, unlike say a DT466/HT570 or Cat C7/C9 where it was a punched out version of the same motor with lots of common components. Foolish IMHO to do so much effort and risk on a totally unique new motor for such little apparent gain. They would have probably been smarter to just stick with just one or the other of those engines, then have the X15 as the upsize alternative.... Or just do X12 and X15 as you say.

But I think there was real money to be made in offering an in-house product that they could sell for more margin at a lower price to the consumer.... And they had made the investment in a US engine plant already, and had the ability to build it affordably. So they felt it was worth it. And the 11L did have a notable fuel economy advantage at any given power rating vs the 13L, which scored points for GHG regs and that mattered.... Plus they wanted to build a brand for their PACCAR total powertrain which they were slapping the name onto lots of stuff -- rebadged Cummins engines, Eaton automated transmissions etc. And some buyers do seem to want an alternative to Cummins products, which are not perfect and have left more than a few folks with a bad taste. For all of its history in the MD and especially HD market a buyer could choose from several different engine mfgs to spec in their truck, and buyers would choose what they preferred. I think the industry doesn't want to completely give up on that concept and just have Cummins under the hood and no other alternatives. (Even though I suppose most of them have now done exactly that in the MD arena lol....)
D

Plus maybe some of the manufacturers see value in demonstrating to Cummins that they ARE capable to build and certify their own engines, even if they choose not to for certain markets. Kind of a competitive tactic, even while they are still buying a ton of Cummins motors, to ensure they don't become completely vulnerable to Cummins' whims, either in terms of dictating cost or if Cummins somehow fell on its face and released a disastrous product or couldn't make cert in a given year. They wouldn't want all of their own products to go down with the Cummins ship in that case, good to still have something else they can sell and have more control over. I think it makes sense even if the "easy" decision would just be to fold your cards and put red engines in everything.
You must log in or register to reply here.
Share:
Facebook Twitter Reddit Pinterest Tumblr WhatsApp Email Link
Top