So long story short: I noticed a slight change in my engine for a few thousand miles where it was running slightly off/rougher. Two days ago I was pulling into Costco and all of a sudden my engine was running like it was getting no fuel. It didn’t shut off but it was running really rough. I shut it off and I could never get it started again. I thought it was a fuel issue until I checked the belt again. This is a 100k belt that broke in 6k miles. The belt is still tight enough that I can’t pull it off with my fingers. What’s the chances of the valves being damaged? 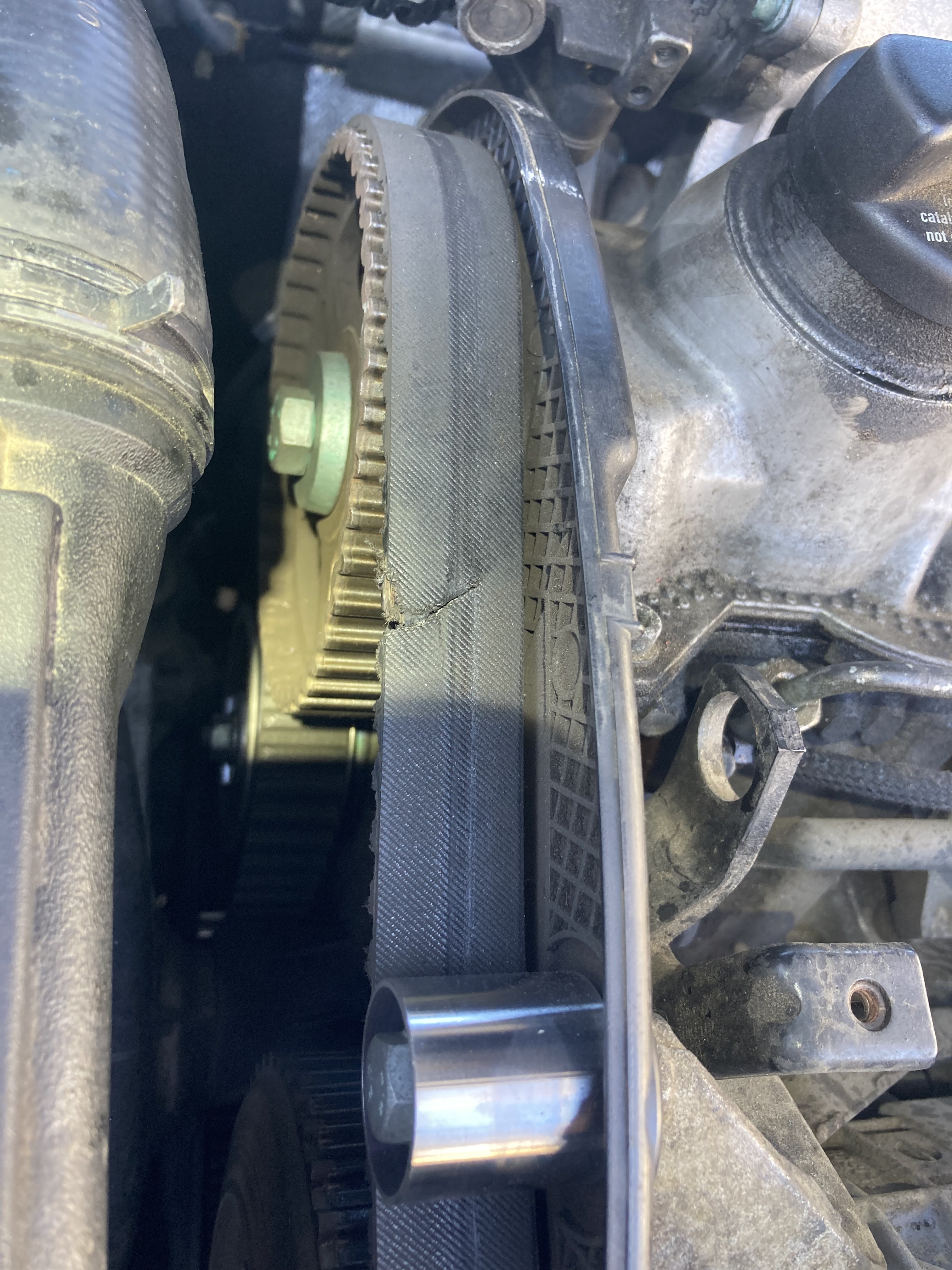 I'd say your chances are pretty good. It didn't completely break, and although the tear has allowed enough
slack for the IP to be out of time, your camshaft should still be still reasonably in time with the valves.
STOP trying to start it obviously. Brand of belt?
C

I'm curious about that centerline marking along the belt.
That seems pretty unusual. Wonder what caused that?

STDOUBT said:
I'm curious about that centerline marking along the belt.
That seems pretty unusual. Wonder what caused that?
Click to expand...

As am I. My guess is something is trapped in the narrow area next to the crankshaft rubbing the center of the belt and potentially causing the tear. A foreign object, small pebble, washer, nut, bolt are other debris.

Get the set of timing tools put the engine at TDC and see how far out it is or hopefully isn’t, and check the belt path especially just to the right of the crankshaft where the belt passes through a spot with about 3mm or clearance.
G

Something is in the path that tore it up and its 90%+ likely the head is hosed.

Looks like FOD (foreign object damage)
See what's down there that got into the belt. Check and see if the timing is off, and don't try to crank it anymore at all. Possibly the injection pump jumped, which isn't an issue, as long as the cam didn't.
Had something similar happen on one of my family's cars. Replaced the belt with a Gates kit, and at only 40k miles it died in a similar way. One of the idlers seized and caused it to tear similarly. Thankfully it didn't jump on the cam timing. Replaced it with an idparts kit. I've seen several of the Gates kits fail like that.
B

See how far out of time and cam/crank are. Then check the pump timing. Pump timing probably is not important but once you take the belt off you’ll lose that info forever so you may as well collect it now.
Once you remove the belt, remove the cam and verify that none of the lifters have any cracks.
What I can see suggests a new belt and likely a roller or water pump is all that will be needed.
Do you have much timing belt experience or was this a first time?

The crank pulley is smallest, and therefore most likely to have slipped the belt( IMO, yes?). Fuel and cam timing both going south together...hopefully nothing contacted valve/piston-wise but I am not what you'd call hopeful.
cheers,
Douglas
S

Back in November my Audi TT to ALH conversion quit while driving down the road to my house. It would turn over but would not start. I pulled the timing belt cover and noticed the timing belt was loose. The tensioner had failed. Luckily it did not slip any teeth. I set the flywheel to TDC, injection pump hole/slot lined up and the slot at the end of the cam lined up for the bracket.

I'd set it to TDC and see if everything is still in correct time and go from there.

I’d do as burn you money states……before removing anything check and see if mechanical timing changed. Hopefully just the IP is the only one screwed and not the relationship between the crank and the cam…..fingers crossed for you.

Well. I'd say pull the injectors and scope the Pistons any kissing.. rebuild time. Cheaper to get another motor.

yep
check timming (its probably off)
Put it back to TDC markings and try rotating it AT THE CRANK ONLY by hand. if nothing hits and you can do 2 full rotations, then go buy a PROPER belt from IDparts or other proper vendor
this has HANS crap written all over it!
unless your missing the cover, i do not think something cut it. this clearly skipped timming a few times now. if it ran... it may be ok. i give it a 30% chance the head is OK.
Who did the belt? when was it done? what part was used?
do not spend $ on it will you verify my 2 top recommendations.
show us a picture of the tensioner. it may be installed incorrectly

The belt didn't break, it bent. And it was in-time enough to keep sputtering at the end, rather than completely crap out and die.

Get a new belt, check the cam+lifters when you put it on, look for the source of the gouge running down the middle of the old one, check the rollers and tensioner thoroughly, and roll with it.

Mongler98 said:
this has HANS crap written all over it!
Click to expand...

Post #3 has Kerma written all over it. Not much the vendor can do, but supply the best parts they know of.
U

I have researched the components of this timing belt kit......they are all quality parts.

Cooprider.....let us know what you find.
G

I've had two bad water pump seals. Both were in fact shaft seals that failed (not block sealing surface issues.) Both kits came from a well-respected vendor. One made it ~75k miles, the second four years and about half that. The first was a "well, meh" sort of thing given that it was beyond the OE's original service interval -- the second I was less-happy about.

And... when I removed all the components to do the job after the second what did I find? The lower idler roller (not the big center one, the small lower roller) had a bearing that was a bit sloppy. Everything else (other than the water pump, which was leaking from the center seal and very badly-so to the point that it drained a hell of a lot of coolant all over the driveway over a couple of days' time) was in perfectly-serviceable condition. Was that roller condemned at that moment? No. Was there ANY reasonable way to inspect that and thus know it was in trouble short of pulling the belt? Nope. Would it have gone another 50-60k miles without the bearing seizing or coming apart and screwing you? I wouldn't take that bet and if it did fail guess what happens.... yep.

You just never know but the OPs picture indicates FOD somewhere in the belt path, likely at the crank pulley since that's the obvious place where something could get in there and do that sort of damage. If the crank and cam are still in time then the engine is probably ok, but if not then its a near-certainty there has been some kissin-cousin action going on where its not supposed to.
K

I've had two bad water pump seals. Both were in fact shaft seals that failed (not block sealing surface issues.) Both kits came from a well-respected vendor. One made it ~75k miles, the second four years and about half that. The first was a "well, meh" sort of thing given that it was beyond the OE's original service interval -- the second I was less-happy about.
Click to expand...

I can second this claim. I've had 2x 100k kits fail very prematurely. 50k and 60k respectively. First one the shaft on the water pump actually snapped but the belt didn't skip (I got very lucky). Inspection of the pump afterwards showed severe leaking (as well as I had to fill my coolant often). Second time the shaft seal started leaking very badly as described above as well. No damage but I replaced the entire TB kit since it's basically a TB job to replace a water pump. It's pretty frustrating as both kits were 100k from a reputable vendor. I don't even bother trying to reach the 100k mark. If I get 80k, it's coming out.
N

Speaking of spudddering and dying....I got my car under the pretense that it had a new timing belt and such.
The carfax checked out with it having been serviced at the VW dealer in Portland. I bought the car. I drove it 13k chasing a cold start smoking condition. It only smoked on cold starts...

Bla bra so finally one day I called the dealer on the carfax report Armstrong VW.
after some digging here is what I was told:


So rewind to when I bought it, the guy I got it from said he was a mechanic at the dealer and they took it in on trade and he got the car for his wife but she got ill so they were selling it.
fastfoward back to today....after talking with the dealer I got took the rocker cover off to see a failed cam shaft! So I got the parts and start installing them ...it gets worse! the head bolts have the same color marking that is on the cam and crank pulleys! someone took the head off! The gasket looks to have a little rust on it, it can't be only 2 years old! So someone took the head off and did not change the gasket!!! Then injector number 3 is broken. Its simple enough fix just the part that the rocker arm sets on and adjust the lash of the injector pump. The little piece of metal up there? yeah half of it is gone...

My point? pull it apart and look around! Im debating on if I just sew it back up and drive it how it is with a new cam and T belt or do i pull the head and continue with the pd150 nozzles breathing mods and the hybrid turbo I have on my shelf? happy new year haha

Really tho if I was you I would Test it with some used parts lol unless you like me and your planning a build...then im not sure its worth building...but i must reiterate , my car had a timing failure and ts been driving fine for 13k so throw some used parts on and test it out....I happen to have some used parts ill basically give you for the cost of shipping and my time

Timing components between ALH and BEW are not very interchangeable. I'd love to run a BEW-width belt on an ALH...
cheers,
Douglas
R

I had mine done at 70k, early, but no regrets in view of making close to double the hp & torque. I view it as cheap insurance.
I got a good 5 years out of it. The OP may have got lucky without the belt having broken completely IMO.
You must log in or register to reply here.
Share:
Facebook Twitter Reddit Pinterest Tumblr WhatsApp Email Link
Top