Ok, Have you left for the Fest yet?

Post travel diaries here.... Picts.... The route you took.... Interesting stuff that you saw or that hapened to you while on your way to the Fest....

Come on, I know a few have left already

Left Saturday morning for THMalloy in Cumerland, RI for B99 biodiesel, but I didn't have my usual 55 gallon drum trailer this time.

I was delayed there by another TDI owner also buying fuel. Good thing we chatted! While comparing coolant fan operation when the A/C was on I opened my hood to see the oil fill cap on the fuel pump! I had loosened it Friday evening thinking that I'd top off the oil, but the oil level was OK.

Got to Asheville, NC where at 3 AM some sleepy (under-the-influence?) driver that had just passed me spun into the guide rail about 100 yards ahead of me. No serious damage was apparent, just a big skid mark. Yes, I bet both types of skid marks! His rear bumper was pretty well scuffed but didn't look to be torn or dislodged as he took off. I had to get off my brakes and back on the fuel because of traffic behind me when I heard a big 'POP'. At first I though I had run over something that the crasher had left in the road, but it was the turbo connection at the outlet of the 'pancake' pipe that had come unclipped.
I pulled over, got out the tools I had brought, and was under the car when an ambulance pulled up. Apparently another driver had called in the spin accident, and by now I'm the only one left at the scene. I'm OK, I explained the accident and that everyone else had left, so the ambulance left. Then Mayberry's finest pulled up and I explained it again.
The Asheville B99.9 station opened at 8 so I had time for a quick nap before they opened and I could fill up.

I continued down and called home from somewhere around Birmingham to check on the weather in New Orleans and it wasn't looking good! So I cranked up the speedo to 80+ MPH to get here as quickly as I thought I could. I burned more fuel, but the early arrival tonight means I can get an early start tomorrow and hopefully get on the road in the afternoon rather than in the rain and wind on Tuesday. I'll not head further south to a biodiesel station even closer to the gulf, but will just head straight north and get what I can where I can.

The early departure from New Orleans may put me in Ypsilanti a day early, but that's not necessarily a bad thing, is it?
Last edited: Aug 26, 2012

A day early would be fine! I'm getting into town at 4pm on Wednesday.

Quite the adventure you're having.

"Twice" in a lifetime 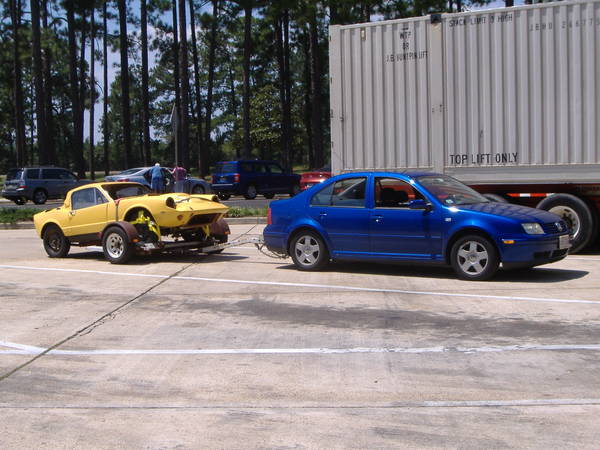 In Miss, and headed north.

I had a customer come in the other day and ask if I would be interested in an Opel GT.......

Car is packed with A/V equipment... clothes and miscellaneous items are going in tonight. Hitting the road bright and early tomorrow!

Heading out the door right now!

Well the wheel shake at 60 turned out to be a bit more than just a lost wheel weight. I mean, the wheel balance doesn't get worse climbing and go away completely, at the same speed, when coasting in gear now, does it?

I stopped in to Paramedick's to see if my suspicions of a worn CV were validated, and unfortunately it was.
We pulled the right side axle and cleaned the dried grease out and saw deep galling in the inner hub (axle side). The balls looked good and there was a bit of burnishing on the outer hub (flange side). No axles were to be had by then (stores closed at 8) so I re-filled the joint with new grease, left the Sonett and dolly there, and headed up to the Dayton area where I had a room waiting.

The plan was to have an axle brought to the 'fest and I'd use the tools borrowed from Paramedick to replace it there, and to head back to "Vur sales" after the fest to retrieve the SAAB and dolly.
In Dayton I located an axle, yes, a re-man, but I checked it before paying. The stock clerk wanted to know if I was going to buy it before he took the box down from the shelf, because he didn't want to put it back if I didn't want it. I replied that I wasn't going to pay for crap parts and if he had confidence in his product he shouldn't have concerns. It look quite good, not a re-cut the hub, slap a new boot on it quickie, but had what look like new inner and outer, new race, and a proper retaining clip rather than a circlip. 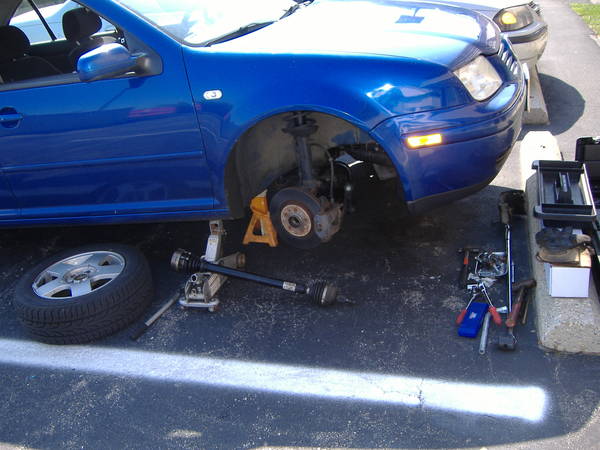 I'll shower up, then test drive it, return the trashed one for it's core value refund, and see if I can return the borrowed tools and get the SAAB and dolly today.
Last edited: Aug 29, 2012

That 5 PM guesstimate was spot on! lol

Welcome to the wonderful land of MI.

I've only made this trip a few dozen times before.

Reunited again. The tandem is in the lot here in Dayton.
I'll fill up at Jatro biodiesel again, and now that I have the "trunk" with the jugs I can fill those too.
Then it's on to MI.

Leave in the morning and then after stopping a few places on the trip across the UP and then lower Michigan, should arrive about 6pm or so. Looking forward to helping stuff the bags once I get settled if you need another set of hands. Just a little over 500 miles just in the state of Michigan.

Left Toronto last night at about 3am! At hotel now, all checked in

Looking forward to seeing everyone when they arrive

We got in just a bit ago! Now to take a quick nap

Leaving now! I have an hour and 20 minute drive! See ya'll really shortly!

A bunch of us are out at dinner in Depot Town. We'll be back around 9 - then on to goody bag stuffing!

Today has been a busy day. I need a nap.

I saw you guys. Got scared to introduce myself. I'm at the bar watching the bears game

Boost gauge finally in and working. Meeting rocketeer928 in the morning for breakfast and it's on to TDIFest via the great white north. Should be pulling in by 4pm tomorrow.

doing laundry and packing would be a good idea right now...
hoping to remember to post a quick pic in the morning with the pair of 03 platinum grays.

I got in about 6pm EDT today - I split the drive over two days (spent last night in Madison, WI). On the return trip, considering taking 90 and 52 from Tomah back to Minneapolis.

mrfrankmrfrank said:
I saw you guys. Got scared to introduce myself. I'm at the bar watching the bears game
Click to expand...

Don't be scared! We don't bite.

Left at midnight. Sitting at the Speedway in elizabethtown, KY currently. We will be leaving here shortly for Newark, OH.
T

Heading out, see everyone in a few hours.