I like it..
Unless we see something similiar to the european engine line up i wont buy one.
The only gas engine i would consider is the 1.4 TSI..
and obviously the 2.0 CR would be ideal.

I work at a company that designs and manufactures auto interiors. Here is a snippet from today's automotive news briefs that we get.

Note that this pertains to the European market, where people are more willing to pay for compact cars. When this makes it to North America, expect it to be a bit decontented.


Volkswagen is planning to give its redesigned
Golf a fresh look and some new technology
German automakerVolkswagen will unveil its sixth-generation Golf car at the Paris (France) Motor Show in October 2008, and it will go on sale in Europe shortly after.
A major change to the current platform model, the new hatchback will include a variety of new options, including seven airbags including a knee airbag, active head restraints, a rear seat seatbelt detection system, daytime running lights, automatic distance control, cruise control, a park assist function and an adaptive chassis that modifies suspension, steering and throttle characteristics.
Martin Winterkorn, VW Group’s chief executive officer, says the new Golf will offer more quality and comfort than the current model at a competitive price. The car – Europe's most successful with more than 26 million sold – was improved in all areas.
The car's exceptional value applies to the newly designed interior, whose refined surfaces and features completely transform class distinctions, both to the touch and visually, especially in the cockpit area. The appearance and layout of materials and details such as brushed chrome accents and round instruments derived directly from those of the Passat CC leave the impression that one is actually sitting in a car of the next higher segment.
Ergonomic properties of the car’s interior also were further developed. For example, all operating controls are even easier to use. They include the control of the automatic climate control system (Climatronic) and the power window controls that now are located further forward in the door trim, making them easier to access.
Volkswagen’s attention to detail is evident throughout the interior. An example is the "seatbelt detection" in the rear. If the Golf is ordered with rear side airbags, the user can recognize on the multifunctional display in the cockpit whether the occupants have their seatbelts fastened in the rear – separately for each seat. And with the leather seats, a new, more robust leather surface is being used. In the cargo area, four practical hooks ensure that after shopping, the contents of shopping bags are not strewn across the cargo area. (Automotive News Europe, Volkswagen news release)
K

Powder Hound said:
Ditto. I can't justify spending for a new car that doesn't do better (by 10 mpg) than my current Y2k Golf. The Polo would have a high probability of doing that, if VW would quit teasing and just tell us what they'll do.

Of course, maybe they can't make up their own minds.
Click to expand...

The next generation Polo will likely improve fuel economy somewhat, just like the new Golf did.
D

not sure which Euro mpg numbers they are- urban, extra-urban, or combined?

Has VWoA confirmed (or even hinted) that the Golf VI will be getting the 2.0CR when it is hopefully released in fall '09?
C

impetus19 said:
Has VWoA confirmed (or even hinted) that the Golf VI will be getting the 2.0CR when it is hopefully released in fall '09?
Click to expand...

No. VWoA hasn't actually released anything about the US Spec Rabbit/Golf.
G

Some of us don;t make it over to VWVortex very often so I figured I would post this hear.

If you are like me you think that the Golf V is still new, but VW is already preparing to release the next generation of its bestselling Golf...well at least in Europe.

Good news for us is that the Golf VI will be available in common-rail 2.0 TDIs (although not mentioned in the linked article).

Here is the article posted next door on the VWVortex website:

Be sure to check out the TDI engine specifics (about 3/4 of the way down the page) and the link to more pictures at the bottom of the page.

Frugality: I think we work at the same company (at least for now - inside joke), except I'm on the "other" campus in Plymouth (Just a guess - I could be wrong). Anyway, here is a longer article from Automotive Engineering about the Golf Mk. VI:
http://www.sae.org/mags/AEI/3880

Here's a snippet about drivetrains:
Engine choice is a wide selection of gasoline and new common-rail diesel units, including TSI (direct injection gasoline, turbocharged and supercharged, or just turbocharged, according to power output), which ranges from about 59 to 118 kW (79 to 158 hp). The 2.0-L 81-kW (109-hp) TDI unit returns 118 g/km of CO2 and a combined fuel consumption of 4.5 L/100 km. Transmission choice is six-speed manual or seven-speed dual-clutch depending on variant.

It's funny how all the cars in the pictures look the same, but the plate numbers are different. BTW: I love the looks of this car!

Also affecting acoustics in a positive way is the completely maintenance-free toothed belt drive of the camshaft.
Click to expand...

I like this car. I hope we have some diesel choices for real. I can see myself in this car in a coupla years.

But would I have to change my alias?

TDI
for the first time in 17 years, none

If this is true and we see the Golf TDI in the spring, I am going to get my deposit for the Jetta back and sit tight for the Golf or the Rabbit or whatever they want to call it. Woohoo!
I

That is the best news i have heard in a long time.. I really hope that article is accurate.. I can definitely hold out for spring.

TDI
None at this time, Looking for a nice one though.

For now I'll be on the sidelines and see how the CR Tdi shakes out. In the next year or so I would like to sell my MK5 Golf and get a MK6 TDI with 7 speed DSG transmission, two door please.
P

vwmk4 how do you like your Rabbit? What kind of fuel economy are you getting? I'm looking to downsize after my lease expires on my Passat wagon (nest is emptying), and I like the Rabbit. It's on my list. I can get an all-dressed Rabbit for a lot less money than a base Passat.

BRUSSELS BELGIAN said:
No, I'm deadly serious. VW has the bad habit of "underbuilding" cars (Passat B4) then doing "penance" by "overbuilding" the next car (B5.5). Then, when they realized they put too much quality in a car, they yo-yo back the other way and start de-contenting (Passat B6). According to this flip-flop theory of Dr. Fahrvergnuegen, the A6 Golf should be a Trash-it (get the pun). As to styling, the new A6 appears to be yet another over-creased exercize. Yet another car with "pulled" headlights and a higher beltline to reduce visibility. If I want that, I can go to a Lexus dealer. Besides, I can't wait until this new (moron) VW CEO for U.S. operations gives these cars "American" ride characteristics. Then they will be UNRELIABLE Toyotas. Cool...
Click to expand...

This article tends to support your view about "underbuilding"

I notice on the UK site they are no longer accepting orders for R32's from the factory. I have heard this includes Golf GT Sport with the 1.4 tsi engine as well.

Who do I write to, to beg them to bring the bluemotion golf tdi to the states? I would be all about buying this car. Please, please, please....

PlaneCrazy said:
I can get an all-dressed Rabbit for a lot less money than a base Passat.
Click to expand...

He's cheap, and does bar mitzvahs, too.

frugality said:
He's cheap, and does bar mitzvahs, too.

impetus19 said:
Has VWoA confirmed (or even hinted) that the Golf VI will be getting the 2.0CR when it is hopefully released in fall '09?
Click to expand...

Only the AutoWeek article, AFAIK/
B

I just wish we could get the 1.4L TSI Golf GT here. Anyone remember Mad Max? He could switch on a clutch to engage the supercharger! VW finally built it! And the stuck a turbo on it too! When can I get mine tho?!?!

This webpage is so confusing:http://www.vw.ca/vwcms_publish/vwcm...n__new_/engines/tsi/the_90_kw_tsi_engine.html

VW canada is using the term TSI for both the turbocharged 2.0L FSI engine (really the TFSI) and the Twincharger 1.4L engine!! Someone please read this page at the above link and tell me it is not confusing?
Last edited: Sep 12, 2008

I quite like the looks of the new Golf....although at first glance, the front end looks very similar to the current Ford Focus. But all in all, I think that this is a much better looking design than the A5....
G

My new TDI was delivered yesterday, I love it, very quiet, very solid. My wife has a 335i BMW which are great cars and I would not trade it for anything, but I love this Jetta, I drove 3 hours of interstate driving yesterday at 79-80 all the way and got 40 mpg, 210 miles, 5 gallons to fill up, my GMC diesel gets 15.5 average, it will be parked quite a bit.

Congratulations on your Jetta! VW is going to do some big things in the next few years with these fabulous engines. That is why the other big names are beginning to put their diesels out.
L

I saw this in Berlin last week: 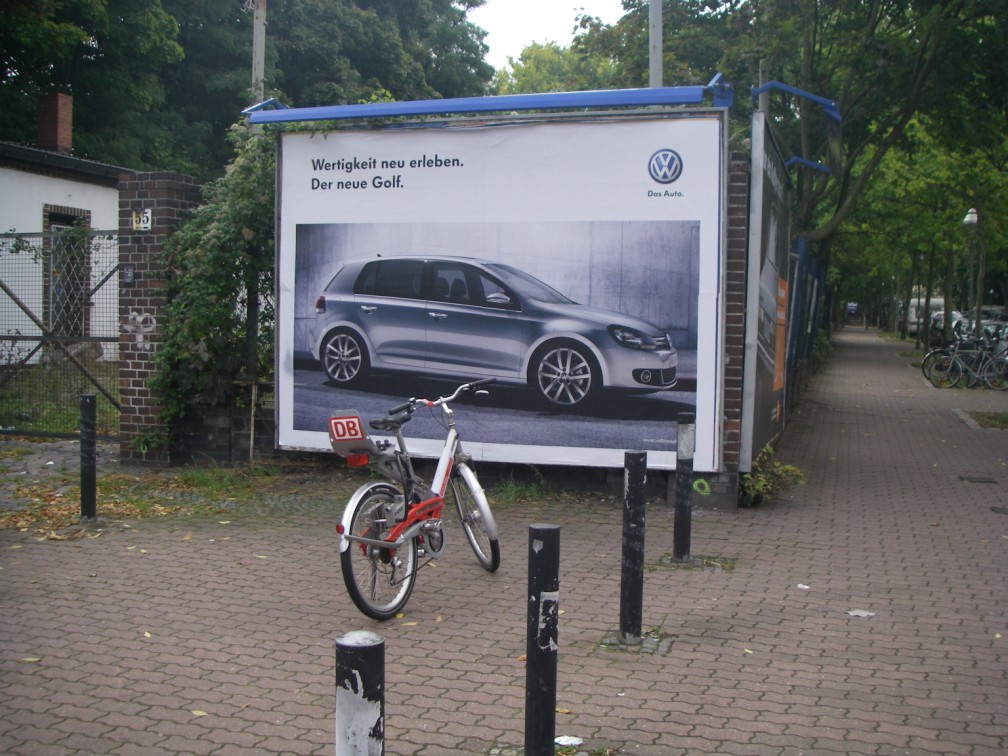 ...and this at a large VW dealer in former East Berlin. Sorry my interior pictures didn't turn out at all, and I didn't get to take a test drive, but the door slams nicely! 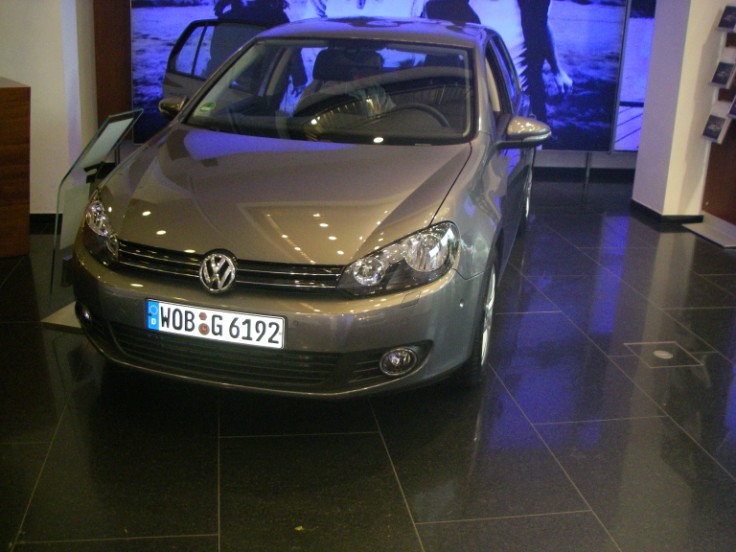 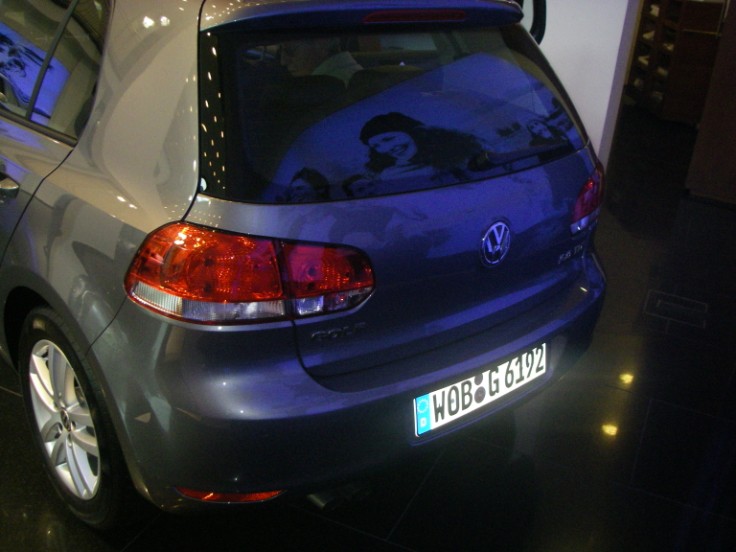