Well here are some early pics of the fest for all of you who could not make it. The car pic was taken through a screen window. 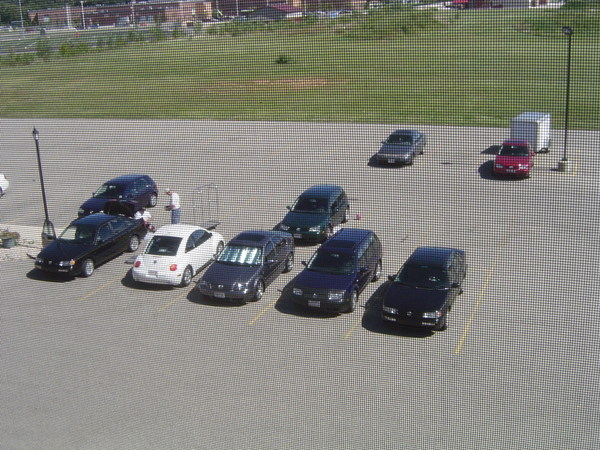 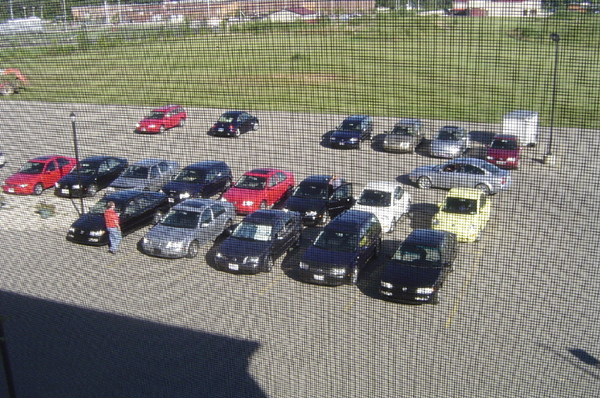 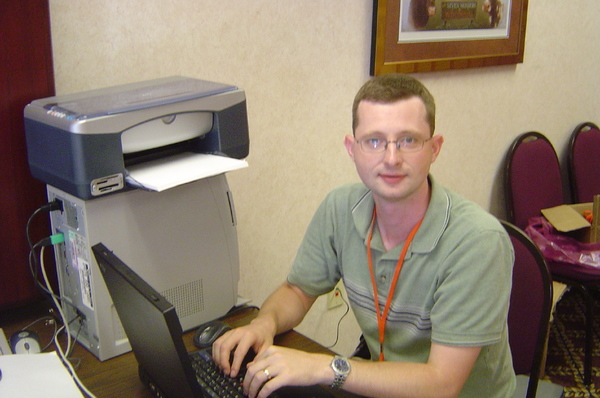 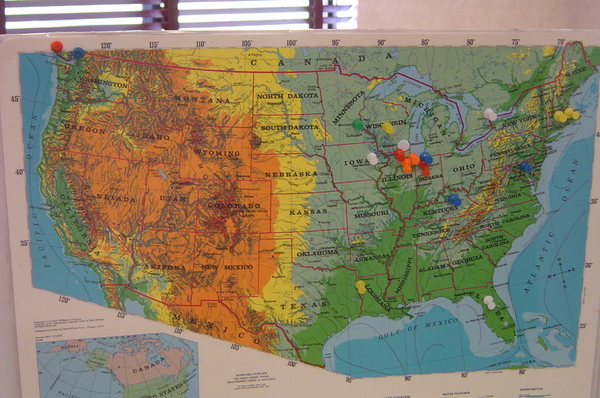 Was a great time, got to meet alot of cool ppl. I Learned alot today and hope I was able to steer a few ppl in the right direction also.
Flash and Flare

I'm in Fest withdrawel... Hurricanes nixed it last year and the Honeymoon ate up the vacation budget for this year... Looks like you guys are having a blast! Quite a few cars from the pics...

Feel free to upload you TDIFest pictures into that area mentioned above. This will help keep the pictures in one spot. 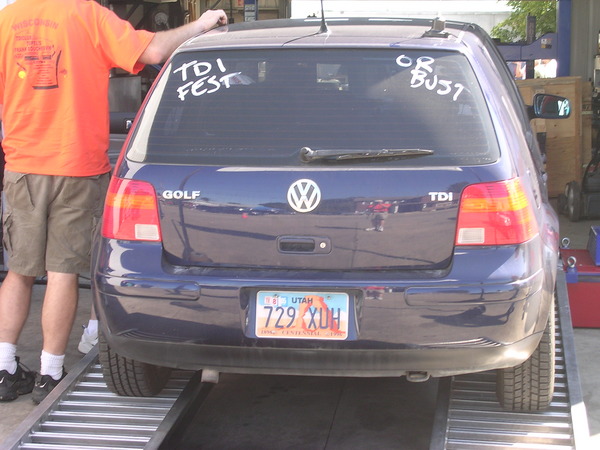 Awesome time!! amazing amount of cars here.
I just got home! drove 850 miles today starting at 4:30 this morning.
1800 miles total for the trip!!

I'm still in my post-fest uphoria. Just got done editing and uploading my pictures.

Everybody noticed this New Beetle with its super wing. The owner states it improves his fuel mileage by about 10%. 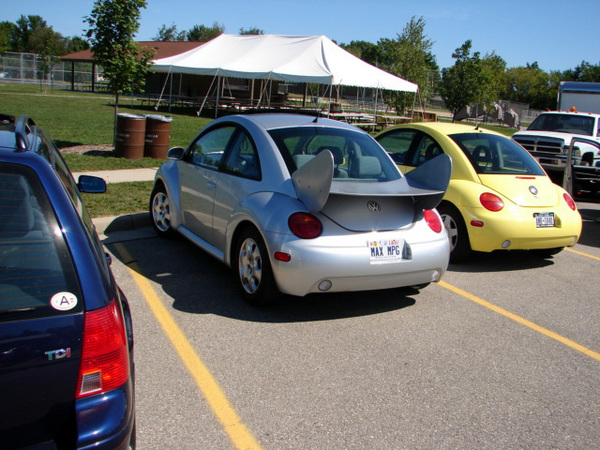 The rarest diesel powered car that showed up was this Saab. The owner figured out a way to legally sneak it into the country. 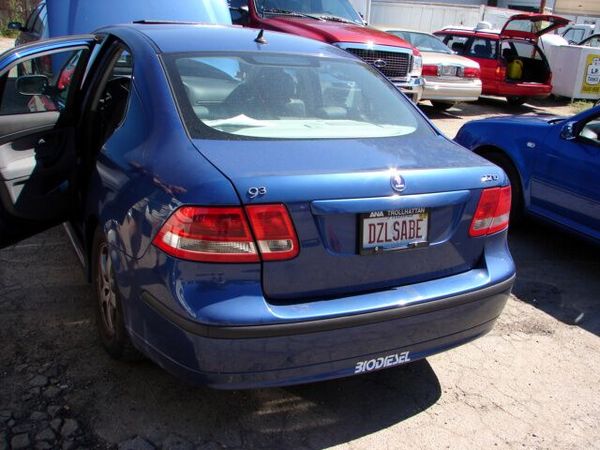 Here is a photo of the engine without the black plastic cover. 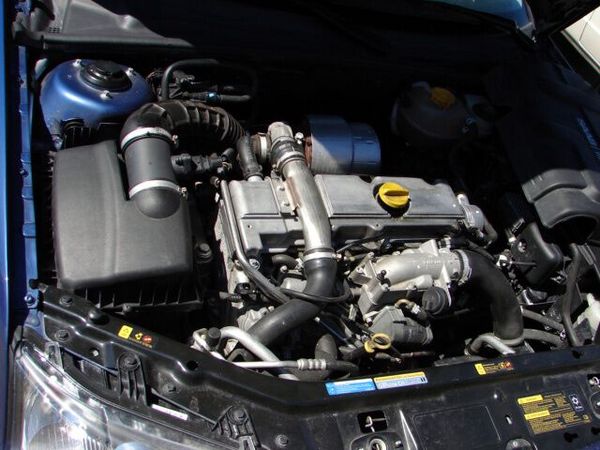 If you see this 2.2TiD trunk badge wave hi. 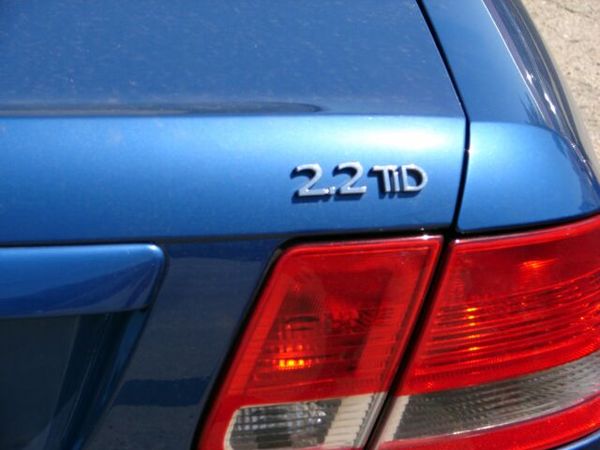 This group shot was interesting. Only about 2/3 of the cars at the fest are in it. There are about 20 cars parked behind the lift in the parking lot. Another dozen are parked on the street. About 10 cars are down at Topel's Garage getting worked on. At least 10 more cars are down at the city building waiting to get chipped. If every car was in the photo, the lot would not have been large enough to hold us all. 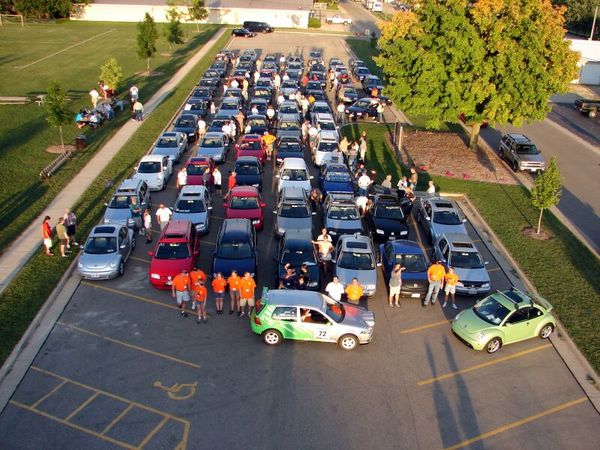 Here is how we got the group photos. This bucket lift was about 40 feet up. Several of us were brave/stupid enough to go up in this thing. It was actually very stable. 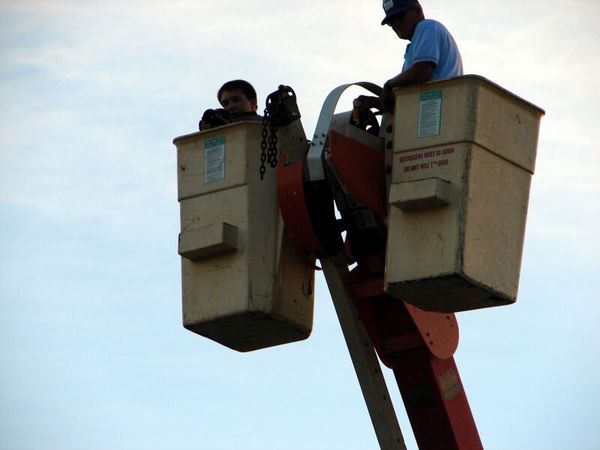 Ah. Here it is, the TDI Ralley car all shined up for the masses to get close and drool over. 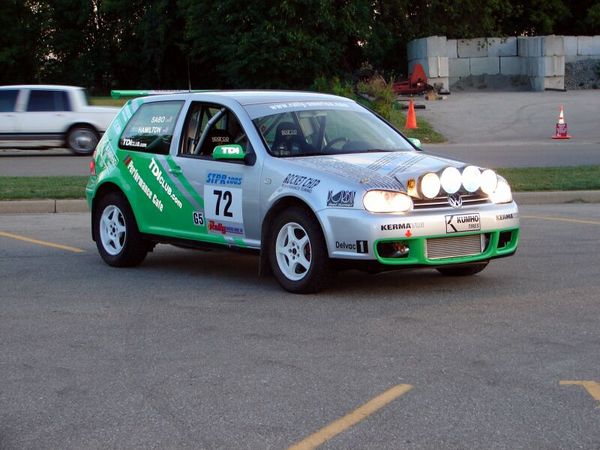 Dieselgeek checks the play in the shifter after tweaking the short shifter linkage in the ralley car. 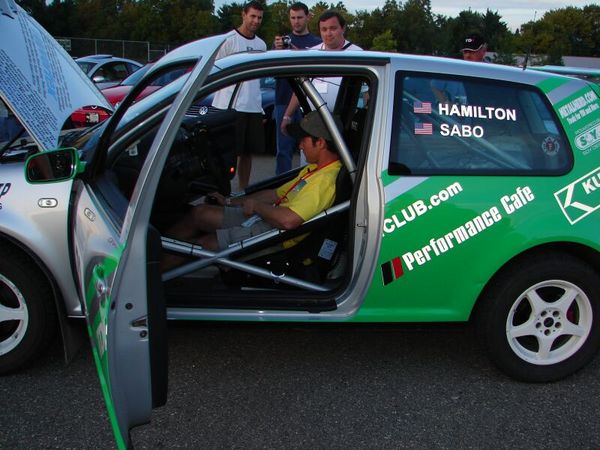 The engine bay of the Ralley car. It looks very stock for the most part. We could tell you what has been done to it but then we would have to kill you. 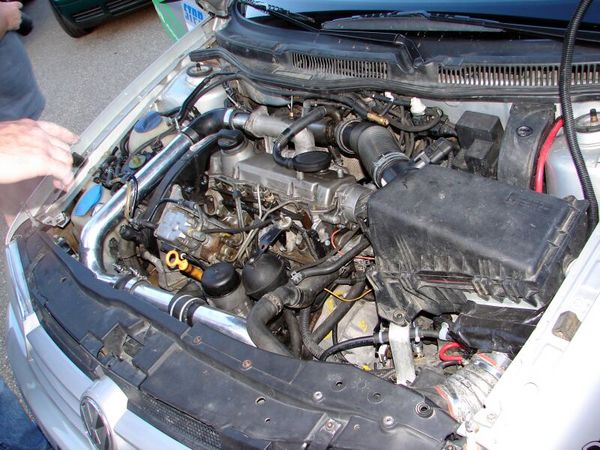 Some photos of the banquet. My wife and I sat next to Mr. & Mrs. Velvetfoot. Karl snuck the hat on his wife Joanie and I snapped the picture. 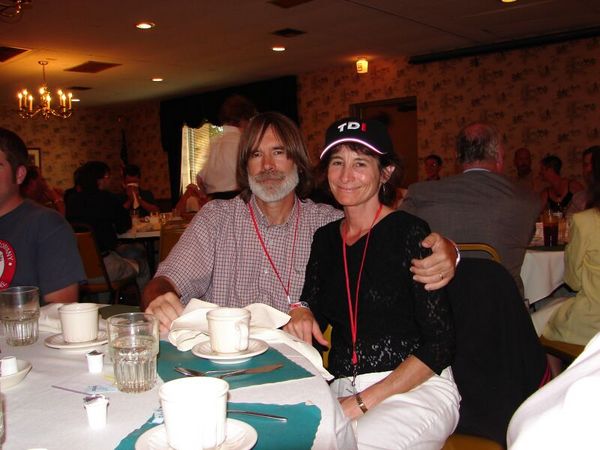 Mr. & Mrs. Metalnerd were at the next table. It's not often we get to see Chuck in a suit and tie so I thought I would get a picture just for the record. 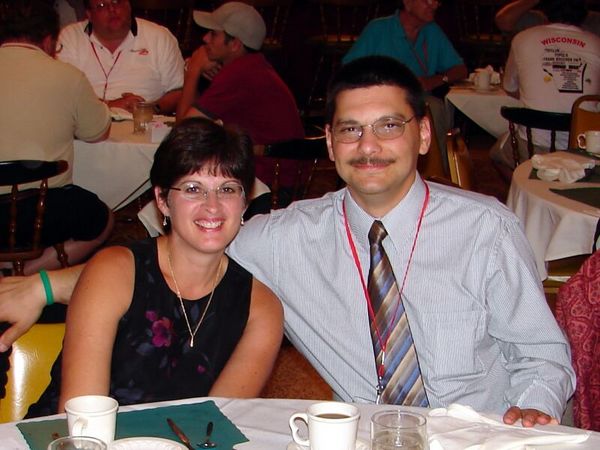 Kerma the nozzle guru is on the left. The man in the middle rode in from out west on a sharp BMW motorcycle. Sorry guys but I forgot to get your names for the photo. 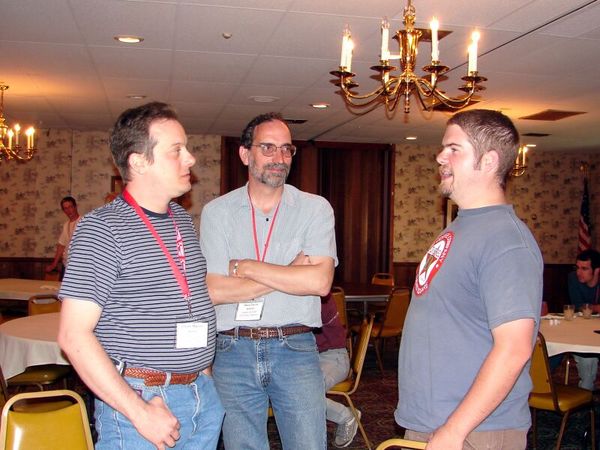 PeterV got the "Bug-Power" award this year. Peter and his wife Julie looking VERY dapper in their matching blazers. 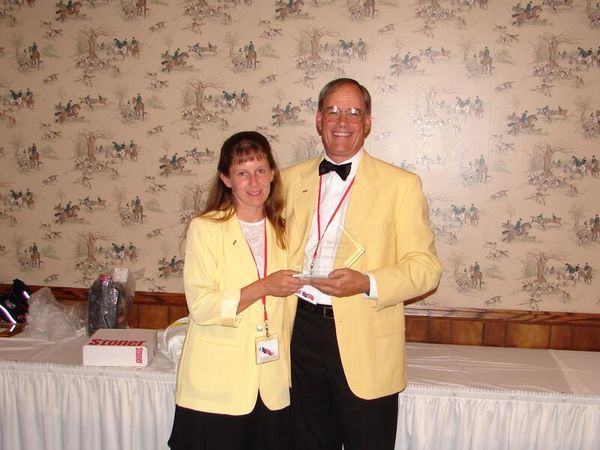 Fred and Peter with the Bug-Power award. 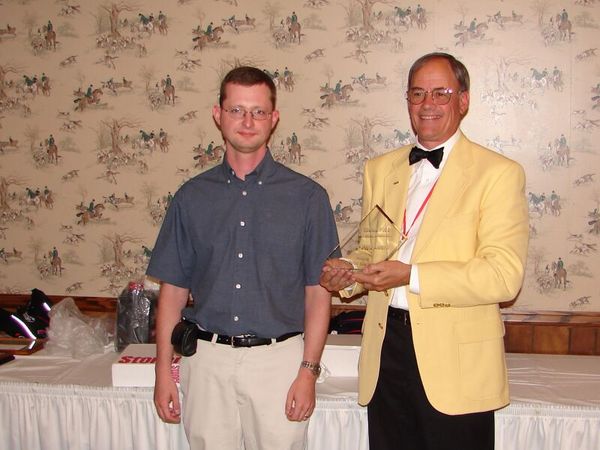 My fourth TDI-Fest and I FINALLY got a picture of myself with Fred. The bribe had to be in small unmarked bills and in US dollars but it was worth it. 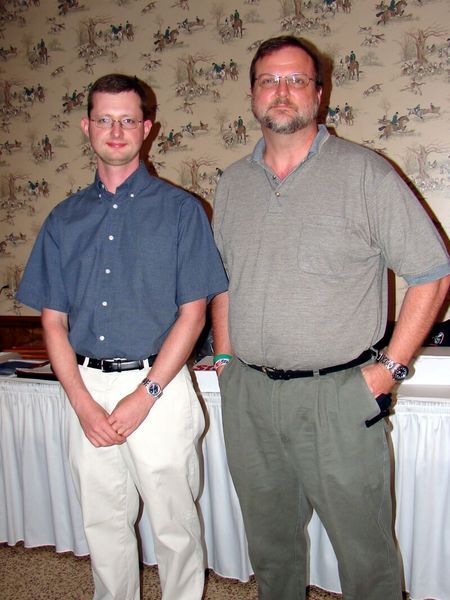 Jonathan Bartlett always seems to get a bunch of awards at every TDI-Fest. Maybe it's because he has BEEN to every TDI-Fest. Oh yeah, Jon is known as "LUG_NUT??" on the forums now. Whatever Jon... 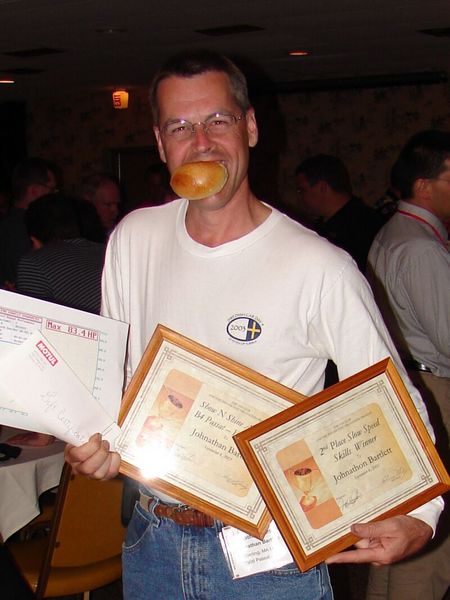 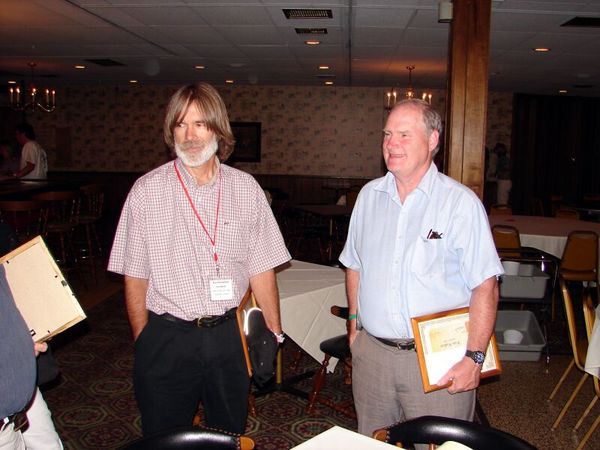 As I was checking out of the hotel this morning I noticed this sign in the lobby. Hmmm... How did Karl qualify as guest of the day? I know, he did it by finally checking out and leaving! Karl brings joy to people where ever he goes, or is that goes away! 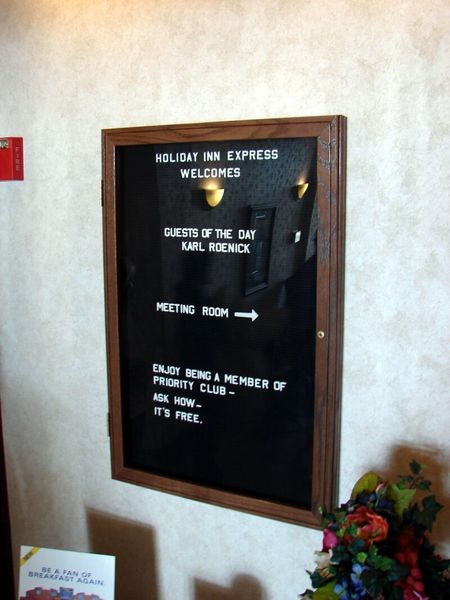 Last and least, we come to the last picture. Some things cannot be explained. They defy logic, order, and natural law. They exist and you have to accept that. Here is one of those things. 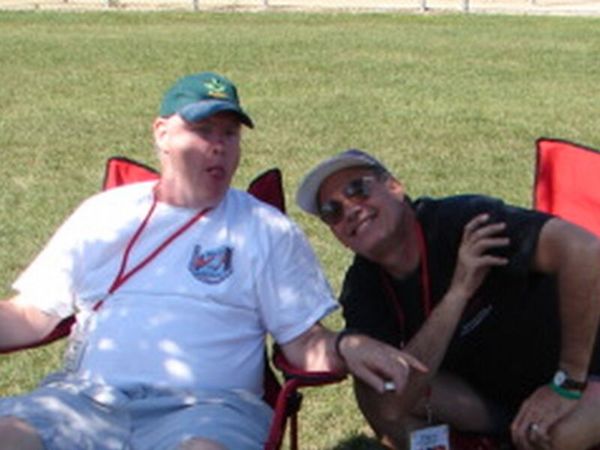 The wife & I had a wonderfuel time at the fest. My gratitude to our hosts who pulled it off. I hope to see everyone next year, where ever TDI-Fest 2006 is going to be held at.
E

I was too busy all weekend, and never got to take any. I'd love to see the Fest through your eyes.

I'd also love to see a vido clip of the slow speed skills course. I know several people tried recording it. If anyone can get that on the web, please send me a link.

Darnit, I take one break from wrenching, and someone gets proof.......

Thanks, Kerma, for the nozzles! 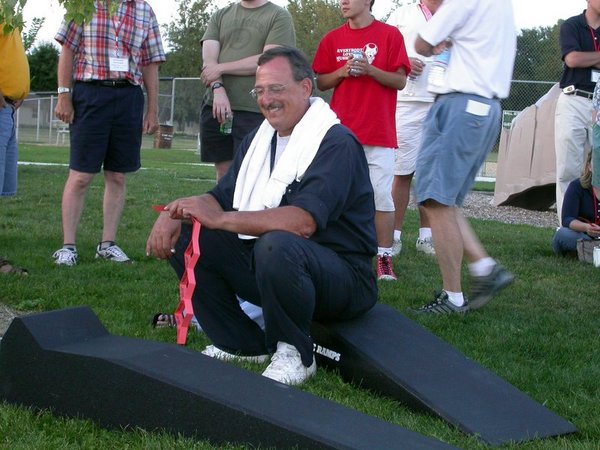 Surely there are some more photos aren't there???

Fred pulled and posted the pics I had gotten but I'm not sure where they are. A few went in for the pic of the fest but as to the rest...?

There weren't that many, though.
B

They are nice photos, but none of those are mine. Oh well, I'll have to see about uploading them at some point!

Tell me about those ramps you are on, Paramedick... like where to get some?

Tell me about those ramps you are on, Paramedick... like where to get some?
Click to expand...

you can get those type ramps at any pep boys,autozone,kmart, awally world for ~25 bucks... IIRC, they are called Rhino Ramps.

Actually, those are made of some kind of high dencity sytrafoam, they were super light.

I have a bunch of pics I keep meaning to post... I'll get to it before next fest I hope.

Tell me about those ramps you are on, Paramedick... like where to get some?
Click to expand...

Here's a link, but you ain't gonna believe the price!

No wonder I liked them so much.

Here's a link, but you ain't gonna believe the price!

No wonder I liked them so much.

If you go from the back to front, it's in semi chronological order.

Who is this guy in white shirt? I didn't know we other people on board wearing hearing aids other than those old farts.

Nice pictures. Your picture of Sears Tower reminds me of the one picture I took. Yes, while driving. It was also a clear day.

Not for the weak of bandwidth Sorry

I just uploaded a couple of tdifest pix from 2005 myself...