Hey guys. Looking for knowledge on the procedure for a turbo replacement. 2006 TDI mk5 BKC Engine. There are no mechanics available for like months that I can find so I’m going to attempt the job myself. Plus I need to tow the car around as it is not drivable. VW want to charge me more than I paid for the car. I’m hoping to get advice or information in regard to my queries.

So I got a new Garrett turbo delivered (and gasket kit) with installation instructions. I rang up VW and got the turbo product code based on my vin number. Using this I was able to the only turbo available I could find in Australia. Its been a while since I worked on cars and I know this is a complex process so I’m getting as much information as I can. Note that this car has 260,000 Km + on the clock. I’m just trying to get it running. I’ve had a mechanic look at it. Impeller is hitting the housing and causing a siren sound. No smoke. Loss of power. It was towed to the shop as soon as the sound started.

I plan on following these instruction Volkswagen Workshop Manuals > Golf Mk5 > Power unit > 4-cylinder diesel engine (1.9 l engine) > Exhaust turbocharger, G-charger > Charge air system with turbocharger > Removing and installing turbocharger
RE Checking turbo failure. As I understand I need to checks a few things to make sure the new turbo will not fail again (hoping it was old age). One being the oil feed is feeding oil at a suitable rate to the turbo and if the turbo is over boosting. RE the oil feed. How do I check enough oil is coming out? Is the fact that oil IS coming out enough? Do I actually run the engine with the turbo off to check this (sounds sketchy). RE over boosting. I’m not sure how to check this. As I understand I can get mechanic to check this after the turbo installed.

I also need to inspect the air feed to see if there are bits of metal or anything in the system. Need to inspect all related hoses. Need to check oil level before and after replacing turbo. Need to pre oil turbo before installing oil feed. Need to crank the car over manually to cycle oil. Then need to run the car at idle to cycle oil.

I’ve just had a service recently in the last month or 2. So do not place on replacing the oil filter or the oil. Do I need to replace the airfilter. Is that critical?

RE new oil lines. Some mechanics have said I need to replace the oil lines. And some say they are made solid and I only need to inspect them. Is this critical? Or is it just another part I need to buy and wait for? IS this necessary in the TDI?

I’ve also purchased some EGR air intake cleaner to clear that if need be. O and I also have an odbeleven to check for any funky faults.
Anything I’ve missed? Anything critical I should not mess up? Can I kill my car? I’m a little nervous on conducting this but as I said I have no option unless I wait a month and pay people to tow it around.

The BKC engine is not available here in the states to my knowledge however the alh and BEW are both similar.

Just put a new oil supply line on the car, many sellers recommend that here in the states mostly because when removing the turbo the oil line get kinked or broken as you attempt to remove the nut where the oil line attaches to the turbo. The oil line can tend to coke up a bit so replacement is a good idea anyway.

By all means pull all the air hoses to the turbo and the intercooler itself and throughly clean them making sure there are no metal particles.

Other than that it looks like you’ve got a good plan. Pre-oil turbo, crank car without starting and then after starting let it idle for a few minutes to make sure the oil is flowing completely to the turbo. I’ve never checked oil flow before, with a new line that shouldn’t be necessary.

If oil went into your exhaust system as a result of the old turbo failing, then you will have the best mosquito foggier for about 5-10 miles of driving as the exhaust gets hot and burns the old oil off. This can be somewhat disconcerting as it looks like the new turbo is dying again. As you drive it just stop and check your oil occasionally to be sure but it will take a while to clear the exhaust, don’t forget to wear your Covid mask so the neighbors don’t know who you are as you’re leaving this tremendous fog behind your car.

Also make sure the the egr bolts are tight, those little egr gaskets will wail like a dying turbo the first time you push your foot on the go pedal. If it wails when you push the gas go back and tighten them and then try again.
S

Thanks Tdijarhead. Awesome, for the all info. Really helpful. ATM I've having trouble getting the oil supply line. I'm going to try take it off and clean it out. If I kill it then I'll have to get a new one. I have read that they do break easily. Gonna try.

How can I check to make sure the turbo is getting supplied enough oil? ATM I'm unsure what caused the turbo to fail. ATM it seems its just old age. The mechanic who looked at it said it 'seems to be' the original turbo but I'll need to double check it.

I had a turbo snap the compressor shaft. The intake side just sat askew in the housing and the exhaust side went down the exhaust pipe still spinning and chewed the end off my brand new O2 sensor (BEW). I fished it out with a magnet. I have no idea what caused the failure, just chalked it up to “old age”. My replacement has been working fine so far.

The only way I can think of to check the oil flow is messy. Disconnect the turbo oil line and crank the engine without starting it, the issue with that is if it’s working and I’m almost certain it will be, you’ll shoot oil all over everything.

I like these braided flexible oil feed lines I have one on each of the tdi’s in my family. These are for the ALH, BEW and BRM engines here in the states, the connection set up is slightly different than the stock oil line as you can see from the fittings that are included. I’m not sure if cascadegerman would ship to Australia, and I’m not sure if the shipping would be a deal breaker or not.

Here’s the same line from their eBay store. Which might help shipping wise if you’re inclined to order one. 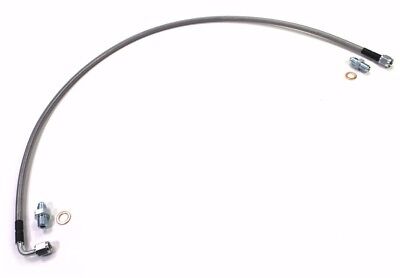