I am wanting to experiment with transplanting a 1.9TDi into a mid 80's style 911 chassis. Kennedy makes an adapter to mate the tdi to the Porsche 915 transaxle.

The 915 transmission has many gear set available so I am certain that the proper gearing can be achieved.

My concerns presently are:
The radiator portion seems to be most important issue to overcome at this point. My initial thought is to mount inside the front wheelwells where the typical Porsche engine oil cooler is. Is there anything else I may not be aware of? Or need to be aware of? Any constructive input or suggestions would be appreciated.

Yikes! I don't know if I'd ruin a car like the 911. I would be willing to bet the engine is way too tall, to fit in the stock bodywork. You may also have to consider laying the tdi at an angle similar to the type 4...
G

Thanks for the reply. I really don't think that it will be ruining it. The car is already missing the original engine anyways. Plus, I drive a ton of miles for work and get paid mileage for doing so. Currently I drive a Y2K Bug, tdi and the thought of the 911 body lines over the Beetle excites me. I am alittle concerned about the engine height but I think I can make it work. It will be tight at the top and near the ground.

If this project was to actually work, I would probably build another with my son for his first car. Benefits??? Well, cool looking car, great MPG, can't carry many passengers, great handling and since we live in a small town, word of any improper behavior will make it back to me.

Again, thanks for the input!
gw

Or wait for the Subaru boxer Turbo Diesel.

I like the V6 TDI idea best. Although I also think it would be antithetical for a Porsche 911 to have a Diesel engine, as much as I love both individually.
M

You may have a good reason to have to run a charge cooler also.........i see having to put the engine in the rear of the car you could have cooling issues....the pipe work would be too long up front to run a fm and unless you could achieve some form of side vents like the turbo version there could be problems.
R

These guys have really nice and functional cooling systems:

I have their system on my 283 Chevy V8 Porsche 914.
You will do some cutting in the front inner fender wells for air flow.

You should be able to shrink the size of the radiator down from what a Jetta/Golf/Beetle has because the 911 is a much lighter car, and you may not be able to retain air conditioning w/o great effort in routing/fitting the compressor, etcetera.

Also, depending on fit, you may be able to incline the ALH engine a little, but I wouldn't go crazy with it or you may have to engineer a dry sump lubrication system. If you're willing to sacrifice rear seat space and relocate fuel tanks...wow...this project sounds complicated. Good luck

Well, just to play devils advocate...look at 4:39 in this clip for my advice--this is perhaps my favorite from Simpsons!
"Oh...another setback... "
-BB

Scott had a valid point. The VW factory mounted turbo diesels in the T3 / Vanagons at 50 degrees so they would fit under the stock rear decklid. I've never actually measured the difference between the 15 and 50 degree engines. Procuring the oil pan, pick up might be worth while for your project.

I think the 911 TDI would make a very desirable vehicle. I'd most certainly drive one.

The kennedy adapter allows the motor to be situated at like 3 different angles. With it I do think you could have the motor tilted up to the full 50 degrees if necessary.

Neat idea. Makes a car like the 911 viable transportation. And before the "purists" have a fit, I've owned 3 of them. They are neat, but not real cars. Unless perhaps we are speaking of a 996 or later. A diesel (I'd use a pd for revs and horspower) would be an oddity, but a welcome one. The mileage would be awesome, and it would be VERY fast!

A wide body kit would solve your cooling problems. This way yu would have a place to mount radiator and intercooler in the rear with some fab work. Not really wide, just 930 wide and 2 inches more in some spots. The tilt is the way to go for a four cylinder, but a V6 Tdi would be great! Mileage would suffer a bit but it would be cool!

Or consider a lupo engine. With one less cylinder, it would fit better in the chassis.

From 1999 to date, the 911 has been water cooled with front mounted radiators (2 or 3 depending on the model) under the bumper. You may be able to adapt some of those parts to your model.
S

If you already have the motor out of your Porsche, perhaps this can help you check the fit:
http://www.haywood-sullivan.com/vanagon/TDI/tdi_engine_cad_drawing_small.pdf

I think it should fit both upright (15deg) or tilted 50 deg. You may as well get a pan and pickup fabricated for the amount people charge for the rare vanagon diesel parts.
M

911's of that vintage are not that spendy without engines (unlike 356's, which are starting to bring truely stupid prices) so it's really not that crazy an idea. Also, you can get yourself a powerful 1.9 TDI for waaaay less than you would shoot on a Porsche 6. I think a TDM would be the way to go, but then I just hate wires

Are you sure the cover won't close over that engine? Maybe the 911 has less vertical clearance than the 356, but I can tell you that even with the A2 long runner intake manifold on my engine, the lid will close over it. It could be that the 1.9 TDI is a bit taller too, but not by much I'm thinking.

Please feel free to contact me at anytime by pm, I've spent most of my project time lately on rust patrol, but we are going to be dealing with many of the same problems regarding the engine swap.

Go for it!
moT

Sounds like a very doable project. Where are you located? I've got an '87 911 and you're welcome to come take engine bay measurements and photos and whatnot if that'll help.

The 911 motor is not a small motor, and the engine bay is larger than it seems just looking at the exterior of the car. I don't doubt that a 1.9tdi will fit - it's tiny by comparison.

Radiator could be mounted inside a 911 turbo wing, which would reduce the plumbing requirements. Either that or in the rear fenders. Trying to mount radiators up front is ambitious I think, and with multiple loooong coolant hoses running the length of the car, it's probably not the most reliable setup - just look at the watercooled vanagons and you'll see what I mean. Using 996 or 997 front radiators will require extensive custom work and probably not a cost effective solution.

Working A/C should be no problem. The Porsche A/C hoses in the engine bay are long and flexible, so you can connect the TDI A/C compressor no problem. The rest of the A/C system probably needs a refresh as the seals tend to dry out after 20 years.

The most difficult part I think will be the mounts. You'll definitely need some kind of custom fabricated engine mounts as the 911 mounts are no where near the TDI mount locations.

The 915 transmission is plenty strong for a 1.9TDI, as you said, you'll definitely need a custom gear set which might just be the most expensive component of this project. Porsche gear sets aren't cheap.

I've considered doing the exact same thing but with a 964 body car - more modern A/C system and electricals and better suited as a daily driver IMO.

If you decide to take this project on, be sure and let us know and post plenty of photos!!

This is making me weep. I have no time to work on my 924/2.0 TD swap, and you guys are throwing TDIs into all kinds of rear engine Porsches. I am feeling very left out. Of course, GET ON WITH IT and best of luck.
M

Pat,
I was originaly going to use a 924 for the swap, as there is a solid car in a guys yard just down the road from me.
But, as I'm sure you know, putting the 1.6 into 924 is much more difficult than the five banger you're using. Then the DCO of the yard guard '24 decided he'd rather let the car sit until it becomes one with the earth than sell it to me for $500, and he backed out of our deal. So, I got thinking about the rusty old SC that I've had in my own barn for 20 years, and the more I thought, the more "sense" it started to make.
I thought surely I would be the only person in the world silly enough to try something like that, but then I found a guy who runs a bio-diesel facility in Germany who had already done it! I've exchanged some emails with him and he seems like a good guy. He used the same Quantum 1.6 (early Passat in Germany) engine that I'm using, but his is box stock, not hotrodded (intercooler, pump mods, big nozzels, VNT turbo) like mine, and his is a B coupe.
I've gotten deeper and deeper into the rustoration work so I've done little mechanical on the car lately, though the engine is in it, and it fits just fine. I would like to send the trany out for a rebuild with taller 3rd and 4th gears added, but that's a big gulp item on my pb&j budget.
Keep us up to date when you do get some time to work on project, it sounds good to me.
moT

Before you people say "it's not in the Porsche spirit to have a diesel"... remember something.

Porsche made diesel tractors, and it was Porsche that designed the first VW diesel, Porsche Project 508. (It was never released, though. However, it did have one derivative - the Porsche 356's 1300 engine. Seeing as all Porsche flat engines from that point forward are derived from that, that means that all modern Porsche engines, except for the RS Spyder and Carrera GT engines, are ultimately derived from a diesel.)
P

You are very full of interesting and relevant information for one of so few years. I am afraid I predict a life of hanging around garages, race tracks and auto internet sites until you are an old fart (like me) for your future. Keep up the good fight.

Need I remind y'all that Porsche also made tractors?

Yes, they did. Take my word for it. Don't make me dig through my photo collection. 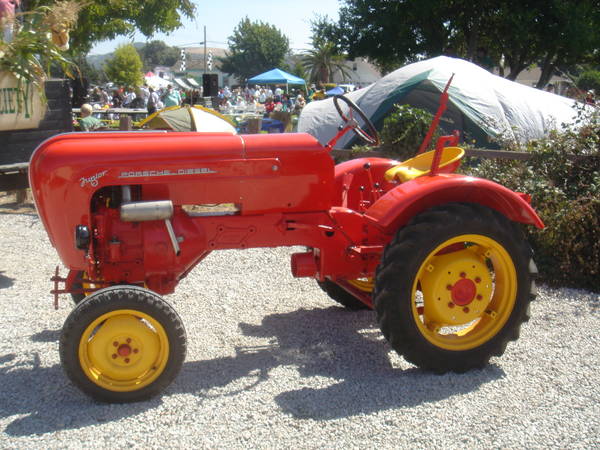 That looks like a really fast tractor. Just look at the aerodynamics of the nose on it! Its truely hot!

need4speed said:
Need I remind y'all that Porsche also made tractors?
Click to expand... 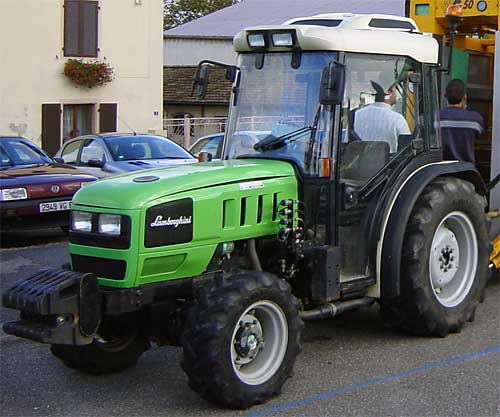 Might be a nice engine for a swap, no?