I'm troubleshooting an intermittent problem for 2 months. Occasionally the starter will not engage when the key is turned to the start position. GP light is on and everything else is normal. There is no obvious click from the starter when this happens (had my hand on the starter) so I don't think the solenoid is engaging (very tight space to verify with a MM with battery still in).Usually it will turn over and start immediately on 2nd or 3rd try, though one time was probably 10 minutes and about 15 attempted starts. Wiggling the key in the ignition seems to have no effect. The starter is a Bosch reman that 3.5 years old/45k miles.

I need to continue following this troubleshooting thread:

What I have done so far: Cleaned all contacts to battery terminal, starter power terminal, grounds. No excessive corrosion on any terminals, grounds, or cables noted. The braided ground cable on the starter itself had surface corrosion but seemed sound. I failed to inspect the solenoid signal wire, so I will do that tomorrow.

My question is if anyone can interpret the following: I've never had an issue on the first start of the day when the engine is cold. It reliably will not turnover on 1st try after a long drive; so it seems to be related to heat? TIA
----EDIT found post where signal wire to solenoid had frayed and because electrical resistivity increases with temperature, that car exhibited similar temperature dependence. Hope to find wiring issue tomorrow.
Last edited: Jun 8, 2014

Had the battery out again and I can't find any evidence of a broken or frayed wire. The trigger wire to the solenoid was followed back as far as possible. The short braided power wire from solenoid to starter was wrapped in shrink wrap and felt a little flimsy, so I used a razor blade to inspect, and found it to be intact and without corrosion

Very difficult to troubleshoot from here because the only time is consistently fails to turn over is when the engine is hot. By the time I make room to troubleshoot with a multimeter, it would probably be working normally. Maybe someone could go in from below, but I'm going to leave this to a mechanic now. Sucks not trusting your vehicle though.

How hard is starter removal and how much is a salvage yard starter? You can always return used electrical components to a salvage yard like starters or altenators even after you install them unlike a napa or AZ where once its installed, its yours! Remove the suspect starter and get a junk yard one. Put er in and if it doesnt fix the problem you can always take the starter back out and return to salvage yard and say you didnt need it or you ended up not using it for some reason unless you personally know the person selling the used parts and you tell them the truth and they dont care anyway. I know throwing parts at stuff isnt very smart but intermittent problems sometimes require it in some form or another. Good luck Friend
~DRZ~

In the last month this problem evolved; for the last two weeks the NCNS condition was most frequent when the engine was cold (first start of the day), not when it was hot. Threw in an ignition switch: no change. Remained intermittent. Never got stranded or had to push start.

Even when it did turn over, starter sounded weak and God-awful. Then two days ago things really started to get bad, with the engine turning over but then abruptly turning off, or the starter staying engaged and making terrible noises. I was very concerned about damage to the flywheel.

Got a rebuilt starter from NAPA and set about replacing this morning. I was pretty confident it was a failing starter solenoid. I didn't get to install, because I found this wiring first: 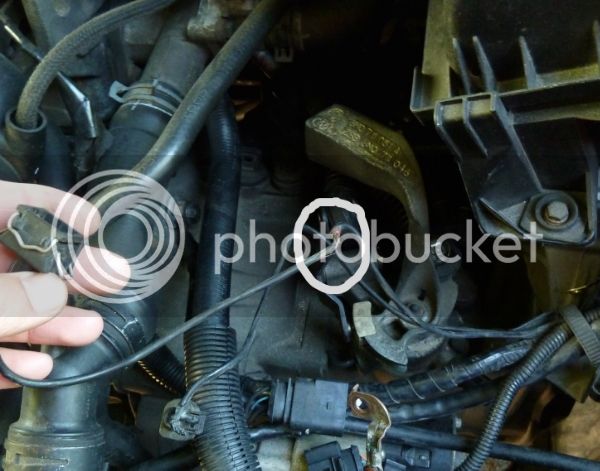 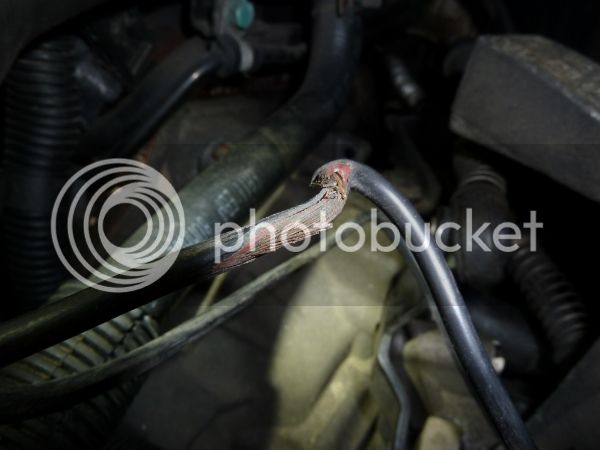 I am annoyed with myself for missing this the first time. I did not realize that the solenoid and reverse switch wires were so long that they were routed to do a complete 180 within the wiring shroud attached to the top starter bolt. It was at the hard bend that this damage occurred. I'm not sure if this is how VW routed them. I have replaced starter twice before and may have incorrectly shoved them back into the shroud.

The only way to see this rub damage (because they were buried at the bottom) was to remove the PITA 13 mm nut and remove the wiring shroud. Poking around/prying wouldn't do it. Found considerable damage to other wires in that shroud, though none to copper. Patched everything up with lots of precautions against this happening again, and kept the reverse switch and solenoid lines out of the shroud all together with 1/4'' split loom on both for extra protection.