Some myths about surge...

Originally posted by SkyPup:
The surge condtions you have described are not only for the TDI VNT15 turbo combination, they also apply to virtually any and all turbochargers and their turbocharged engines, diesel or gas.

Do you have any maps of the KKK03 with data logging from a 1.8T gasser? It should show the same results.
Click to expand...

Ask and ye shall receive.

Andy, at the top-end, you're running that poor turbo on the ragged edge of CHOKE (notice the VERTICAL wall on the right side of your curve) and spinning that sucker at 160k RPM!

You're getting some really hot air as well when you're running about 50% compressor efficiencies @ a PR of 1.7.

Keep in mind that boost pressure read at the MAP sensor (and reported by VAG-COM) or a mechanical gauge will be lower than the more important compressor outlet pressure, which is what the maps are based upon. This is because of losses through the intake tract and intercooler.

Edit: Can you say you need a bigger turbo?!

No need to point out that the differences in correction temperature and pressure -- I already saw that...
D

There's been some recent misinformation on the forum about turbo surge, and I want to address it. Surge is NOT happening constantly on A4s. Surge is NOT the cause of all turbo failures. Surge did NOT make your girlfriend break up with you. What is true is that under some specific conditions, the VNT15 used on the A4 engines is pretty close to the edge of the envelope when it comes to surge. Read that bold part again...

Here's the original boost map that I posted a while back: 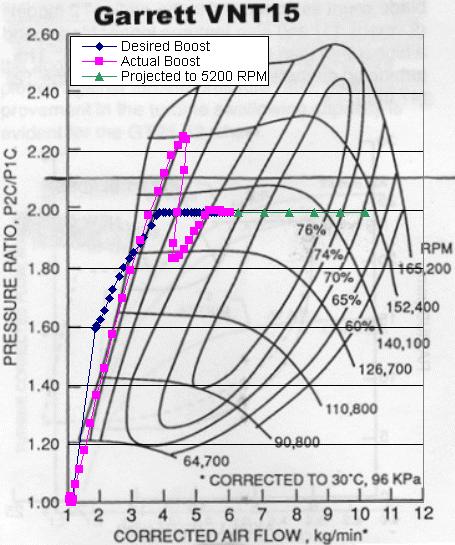 Surge happens when you go left of the leftmost line on the plot. Now, of course there is some wiggle room... there are parameters not taken into account, such as the engine that the turbo is connected to, uncertainties in the data that's taken, etc. But it is common practice that you want some space between the surge line and your operating regime. You can see that there's virtually no space at all in the above plot.

Now... this is IMPORTANT. The above plot ONLY APPLIES TO A SPECIFIC CONDITION. That condition is this: WOT acceleration from idle in 4th gear with a manual transmission on a stock engine. I found a flat interstate onramp, put it in 4th gear, took my foot off the pedal, let the engine stabilize to idle and then PUNCHED it.

Now, this is a REALLY specific case. Why would I even do this test? Unless you're a wacko, you normally wouldn't be going WOT in 4th gear. The reason I did this was to investigate what happens when the engine is lugged beneath 2000 RPM.

2) LOTS OF LUGGING BELOW 2000 RPM (allowing the turbo time to spool up and make high boost while the engine is still at low RPMs) In this context, lugging means very low levels of acceleration... i.e. you're climbing a steep hill at 1600 RPM, flooring it, and you're barely accelerating, or not at all

In the data taken for the plot above, it took my stock car over 6 seconds to go from idle to 2000 RPM. That's a LOT of time to allow the turbo to spool up. I can't stress this point enough... if you aren't lugging the engine, the turbo will not have enough time for the boost to rise high enough to cause surge.

So... the above plot is for a specific case. It does not mean that the turbo is surging every time you accelerate from idle. It only reflects on WOT in 4th gear from idle, and situations similar to that. That's it.

Here's some more plots. The first one is similar to the above, but done in 1st gear. That is, I put my car in 1st, allowed the car to roll along at idle, and then PUNCHED IT. 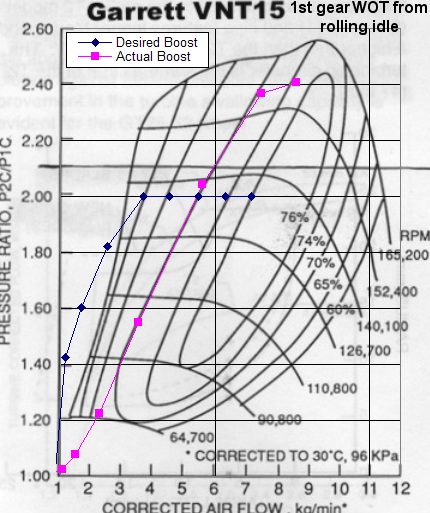 The turbo is NOWHERE NEAR surge in this case. (FYI, don't even look at data where Pr is below 1.2... you notice the surge line isn't extended down there... that's because surge isn't an issue at these low Prs) Now, here's a plot where I launched from a stoplight. I would call it a moderately agressive launch... something you'd typically see driving in city traffic. Clutch was fully engaged by 1200 RPM or so, and roughly 2/3 throttle was applied. 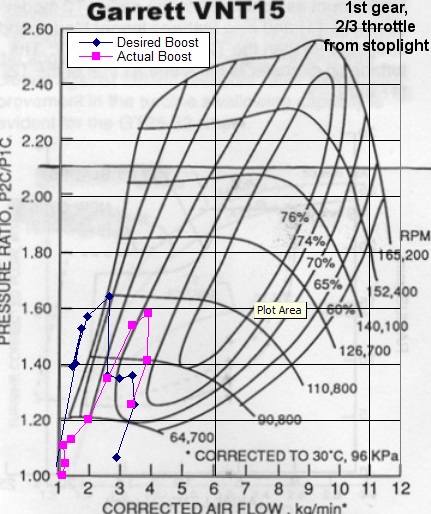 What do the two above plots tell us? They tell us that if you're in 1st gear, you don't need to worry about anything. Regardless of your launching style you're nowhere near surge. Now, if you're at high altitude, and especially if you have some sort of non-stock fueling setup you will be pushed closer to the surge line, but my judgement is that you still won't be close.

Now, another thing that's been claimed is that you want to keep the RPMs above 2000 at all times! This recently has taken form in recommendations to never ever shift below 3000 RPM to keep you above 2000 when you hit the higher gear. Now, according to the first graph I posted, I would say that this is good advice IF YOU'RE IN A SITUATION WHERE YOU'RE LUGGING THE ENGINE. That means high gear, and/or high load (climbing or towing). To check this out, I did another test... I put the car in 2nd gear, cruised along at 1500 RPM, and then I PUNCHED IT. 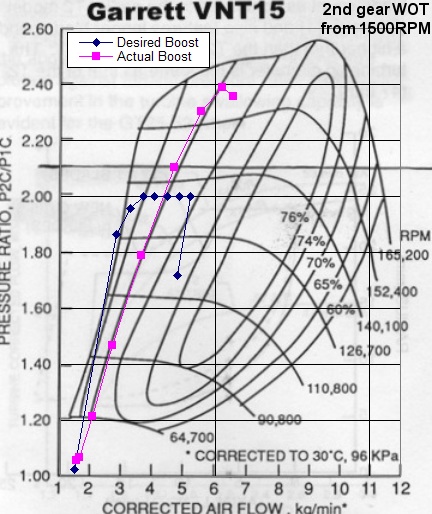 So, in conclusion... (the part you've all been waiting for

When is surge a problem? AT HIGH LEVELS OF THROTTLE when you're LUGGING THE ENGINE. The latter implies HIGH gear on level ground or extreme levels of load (climbing or towing).

Surge is NOT a problem when rolling away from a stop, when accelerating at low RPMs in lower gears under light load...

Just don't let the engine spend too much time under 2000 with high throttle inputs in high gear or under heavy load. That's it.

The surge condtions you have described are not only for the TDI VNT15 turbo combination, they also apply to virtually any and all turbochargers and their turbocharged engines, diesel or gas.