I like to go camping in remote places with my 2001 Golf TDI, and thought it would be useful to make a thread where people can share advice on driving techniques and modifications useful for this. I will try to update this first post with links to comments later down which are particularly useful, and maybe create a FAQ later on.

Here are some notes:

ASR/EDL traction control by swapping ABS pump
You can substantially improve the traction of your MKIV TDI at low cost by just swapping the ABS pump as described here (http://forums.tdiclub.com/showthread.php?t=37354). ASR limits the throttle to control wheelspin by comparing front and rear axle speeds. EDL simulates a differential lock by applying the brakes to a spinning wheel, transferring the power to the other side.

After doing this I have found that the EDL isn't very aggressive on these cars, and you need to use high throttle to get lots of wheel speed on the spinning wheel before any substantial torque is transferred. The EDL system also totally fails when you are in deep mud or water, as the brakes don't grip well when submersed (first hand experience, unfortunately). Supposedly, the combination of EDL plus a limited slip differential will together allow much more effective torque transfer than either device by itself. Read my post below to see more about how the EDL works: http://forums.tdiclub.com/showpost.php?p=5486755&postcount=8

Suspension flex
The MKIV/A4 cars have very little suspension flex, but so much weight in the front, that both front wheels will stay planted with uneven terrain, lifting only the rear wheel when flexed out, which really gives great traction over uneven surfaces. If you have too much weight in the back, you will lose this ability. You can also disconnect the front swaybar to increase flex, but again both front wheels will stay planted even without this.

As a test, I have driven one front wheel of my TDI golf up a steep loading ramp, and was able to get the car nearly 45 degrees, with both front wheels still planted and having full traction. One rear wheel was very high in the air.

Larger tires
I haven't tried this myself, but after reading all of the posts I could find on this, it seems that larger tires can be fit with the following progression of modifications:
205/70/15 on a stock car
205/75/15 with a 2" lift (e.g. Metalnerd kit)
215/75/15 with custom modified front struts, and working fender liners via heat gun (see here http://forums.tdiclub.com/showthread.php?t=423878)


Chains/spikes spiders
I carry Spikes Spiders in my TDI. They are really good for snow/ice, but I found that they probably aren't useful for getting un-stuck offroad, because they are hard to get on if the wheel is sunk down in mud or sand. If you put them on before going through a low traction area, it will probably help a lot. They take under a minute to install and remove, and can be found cheap nowadays in MKIV/A4 wheel sizes, which are no longer very popular sizes on newer cars.

Skid plates and rock avoidance
A must for the TDI, as the oil pan is extremely fragile. Still, this is no replacement for carefully choosing a line that avoids rocks with the oil pan. It's essential for the driver to know where the lowest most vulnerable parts are (e.g. oil pan location) and choose a line through obstacles which protects them.

Recovery
Winches are hard to mount on these cars, and you will probably never find a situation where it would be useful. When you are stuck the weight is probably on delicate parts instead of the wheels, and pulling with a winch will cause damage. I really like the combination of three things: A Hi-Lift jack, a "lift mate" which lifts the wheel instead of the body, and some wood or ramps to put under the wheels. Edit: The 36" (shortest) Hi-Lift jack will fit width wise in an MKIV trunk, and can be safely strapped to the cargo hold-downs with motorcycle straps.

Here is a photo of successfully using this recovery method in soft sand, far from the road in Baja with my stock '87 Volvo. This worked immediately, after over an hour of trying to use a come-a-long/hand winch and getting nowhere. I've actually never had to do this in my TDI, it doesn't get stuck in sand as easily as the Volvo.

Links to other useful/related threads
Raising Car for Off-Road Crawling or Rally https://forums.tdiclub.com/showthread.php?t=269310

May have missed it, but how about raising the car 1" or 2" with spacers in addition or in lieu of taller tires?

Or.... 4 motion my wife's car is a dream in the snow and on the beach. Kind of why it's her car. That way I don't have to worry about her getting stuck. One of these days if I ever get ambitious enough I might import a 4motion super golf straight from Germany.
I

I would go for a 2" lift, stock springs and dampers, and some fairly aggressive tires. Perhaps snows would work. I'm not a big fan of going to larger diameter tires.

Here's my son's Golf with a 2" lift. His commute included 2 miles of dirt roads for several years, winter, mud season, and summer. Never got stuck. 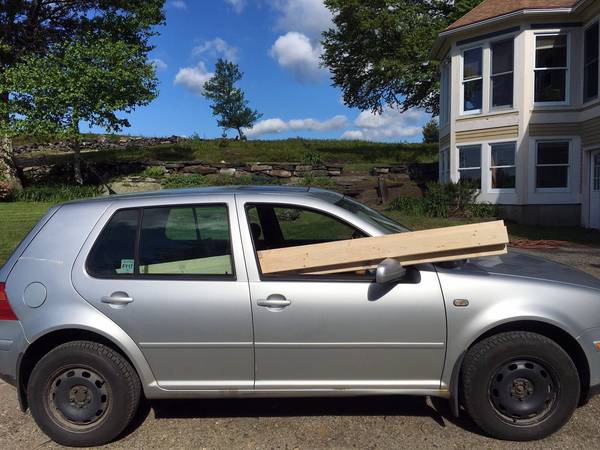 On the beach i have never had an issue with traction. If things get weird, it digs, grabs and goes.

Mud, ive been stuck, quickly, in the mud...
General Grabbers just cake with mud and turn to slicks. I simply jack one front tire, put a board or floor matt under it, do the other side and bam, you're unstuck.

Snow, my least experienced condition, and so far it has done great! General grabbers grip pretty well. Some spots, where icy, are real slow take offs, but once moving, these tires grip and go.
Reverse seems to grip well when forward motion stops. Havent been stuck, yet. Been mostly impressed by what its been able to pull through.

I went with the 2 inch lift, no front sway bar and general grabber 205-75-15, Pander FMJ. I'm pleased with the looks and performance of my hatchback.

I think this would be the right thread to express this in. If money become no issue, id like to find a tranny with a much slower first gear idle speed and see what sort of trails a mk4 tdi could successfully crawl around in. I find that the 5mph idle speed of 1st is alittle much to be crawling over, or hopping over any real bumpy/offroad conditions. 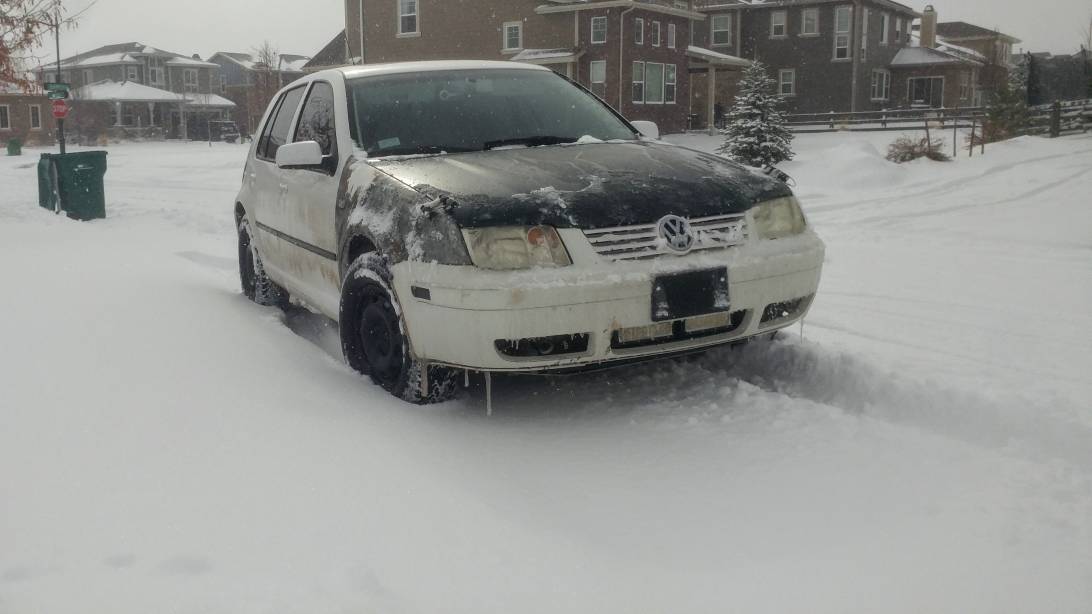 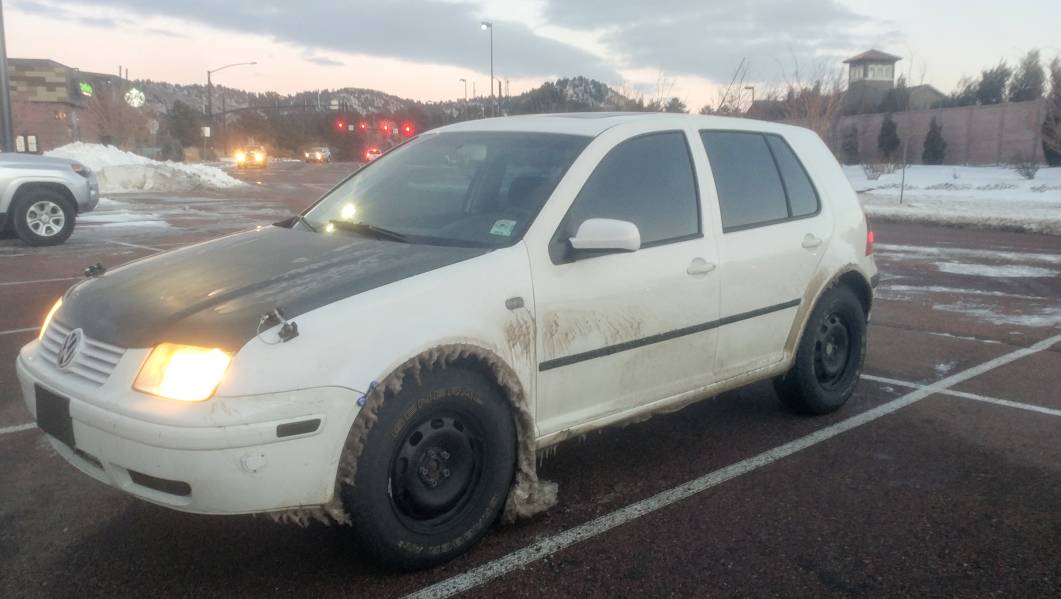 BobnOH said:
May have missed it, but how about raising the car 1" or 2" with spacers in addition or in lieu of taller tires?
Click to expand...

I haven't done this to my car, but I added links to common lift kits at the top, based on your suggestion.


IndigoBlueWagon said:
I'm not a big fan of going to larger diameter tires.
Click to expand...

Why not? I'm not either, but curious if your reasons are different. Usually manual TDIs have a high first gear already, so big tires will raise the crawl speed... but most serious off-road tires only come in larger sizes. Also thanks for running the best TDI parts source around!


ItAintRodKnock said:
If money become no issue, id like to find a tranny with a much slower first gear idle speed and see what sort of trails a mk4 tdi could successfully crawl around in.
Click to expand...

Lots of great tips, thanks! I also think the 1st gear is way too high in a manual TDI, I have a euro 02m, and have to feather the clutch a lot to go slow. The auto is probably better offroad, but I'm not going to go back to that...
Last edited: Feb 2, 2019
I

I don't like the effect it has on speedometer and odometer accuracy and suspension geometry. The suspension is designed for the wheel center to be in a certain location based on the overall wheel/tire diameter. When you increase it significantly it throws things off, causing changes in steering and handling. But I don't drive off road, and I recognize it may be worthwhile for others.

Thanks for the kind words. We love diesels!
C

I did some testing of the EDL system on my 2001 Golf TDI w/ the MK60 pump from an '04 GTI installed. I wanted to prove that it really works, and under what conditions.

Testing this could be dangerous, but I will explain how I did it anyway. Replicate at your own risk!

Often people test lockers or LSDs by getting one tire in the air on a loading ramp or steep hill, but that isn't possible with this car, because it is so front heavy, both front tires will stay planted at any angle.

To test the EDL, first I blocked the rear wheels with rocks, and jacked the car up to put a stack of cut 2x4 fragments under the control arm. I added just enough wood to get the left front tire about 0.5 cm off the ground after lowering the jack.

After lowering, I started the car, put it into 1st, and fully depressed the throttle with the ASR still enabled. Once it hit around 3,000 rpm the car started rocking forward in pulses as the EDL activated, and the car climbed over the rocks blocking the rear tires. I stopped and removed the blocks with the jack before the car moved enough to fall off of them.

So in summary, the EDL is very effective, but requires heavy throttle/high rpms before it activates strongly.
Last edited: Feb 23, 2019

That's good to know. I retrofitted ESP to my car, and it makes driving in rain/hail/light snow super easy. Are there any worried about diff gears blowing up from the EDL?
C

Nero Morg said:
Are there any worried about diff gears blowing up from the EDL?
Click to expand...

I think it's the opposite, the EDL protects the diff from blowing up. With an open diff you can get a really high speed on one wheel, and if it suddenly catches traction the diff could blow up instead of transferring the torque... but the EDL activates comparatively softly, and limits the max possible speed differential between the two wheels, which protects from this type of damage. The pulsing might make parts wear faster, but I don't think it happens strongly enough to actually break anything.
Last edited: Feb 24, 2019
R

"1st gear is way too high in a manual TDI"

For the dedicated offroad TDI, you could put a manual gasser tranny
in perhaps. That's geared lower.