Slap that puppy in! You can fix all things we've forgotten at a latter time
H

Haha, I can't wait. My friend's coming with me on Monday. I'll just have to make the passenger side engine mounting bracket... that should take all of 10 minutes. And with my luck an hour to fit properly =P

Then hook everything up, and then make some custom intercooler piping, shouldn't be too difficult? =P

Then to weld in my makeshift hybrid exhaust =P
H

Of course, went to the mechanic after work today (as well as found the right grade bolts at home depot) and learned that the hoist won't be free until later next week.

Screw that, I'm renting one on Monday and having my friend come with me to work to help drop it in.
H

What a pain in the arse.

SOOOOO close to getting the engine in. But ended up not being able to. Made a LOT of progress today.

I need to remake the passenger side engine mount bracket. It seemed like it was perfect until I was lowering the engine in -_- by then it was too late. I'll be fixing that tomorrow, and hopefully dropping it in. But... it's never going to be that easy.
H 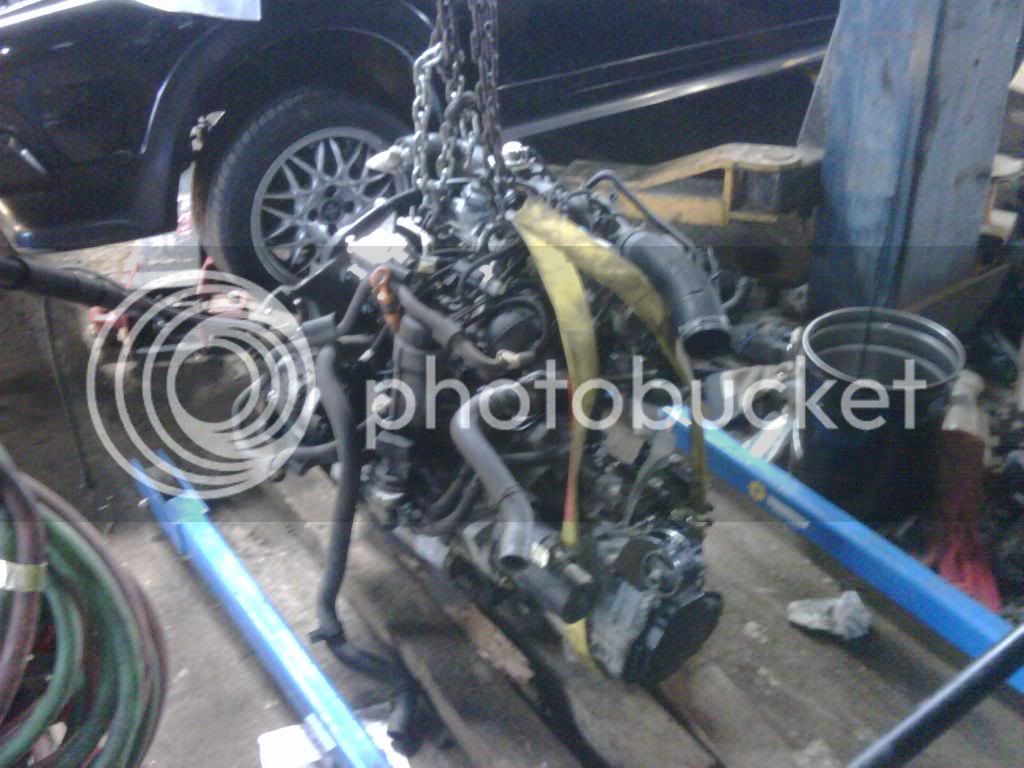 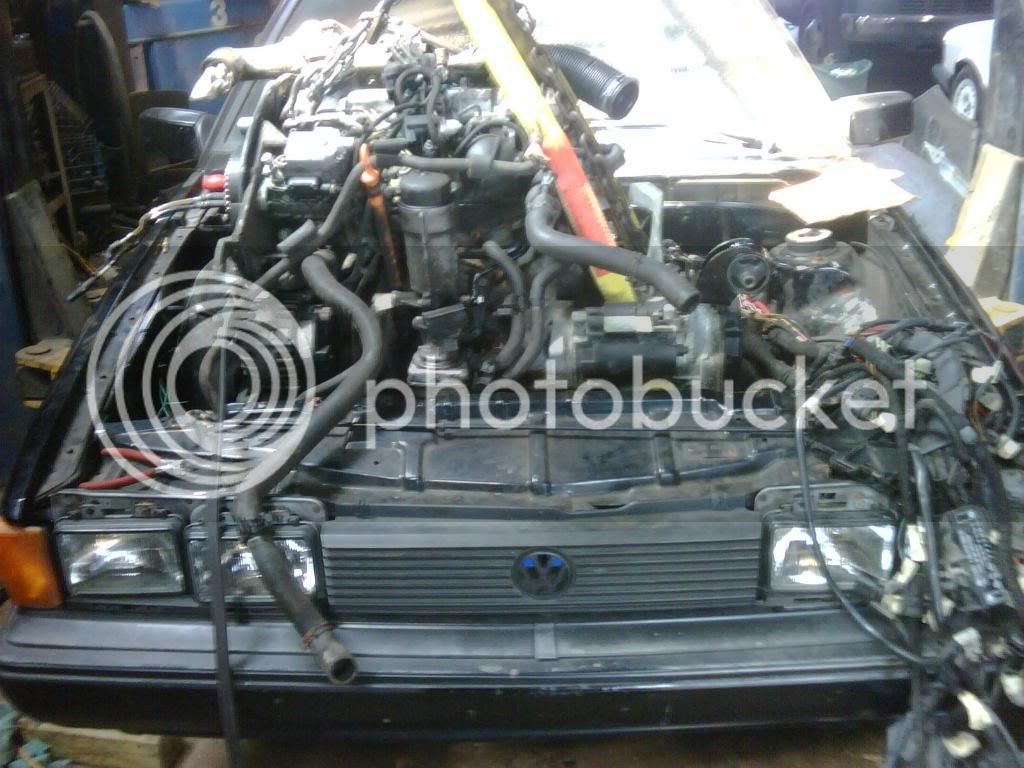 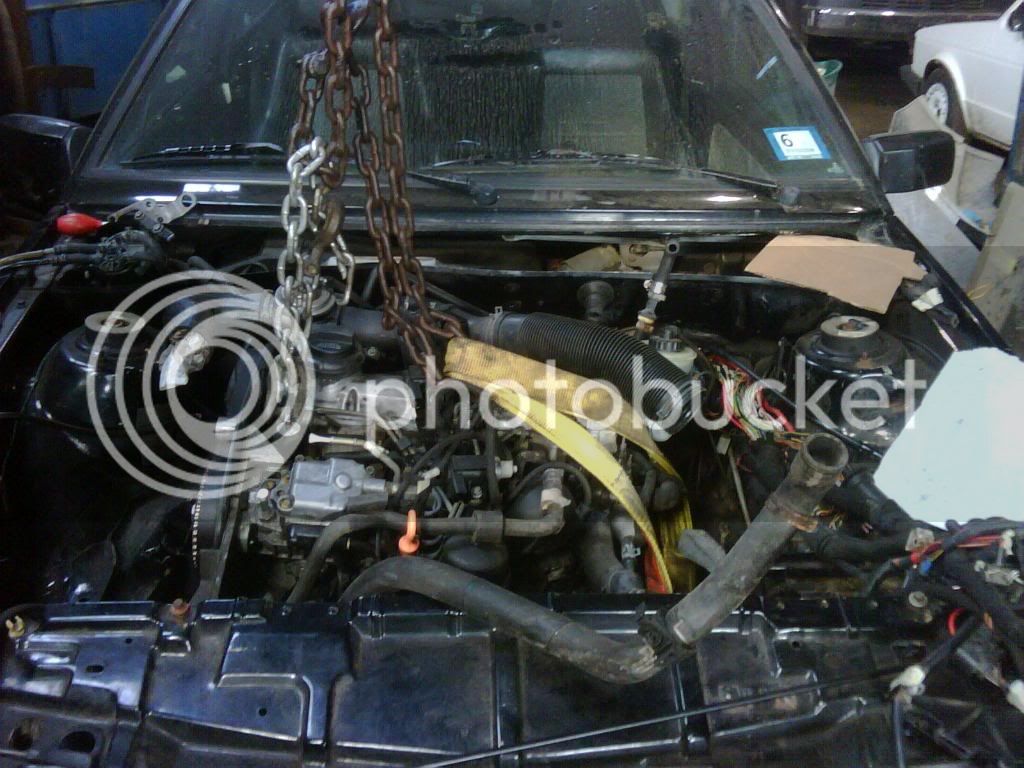 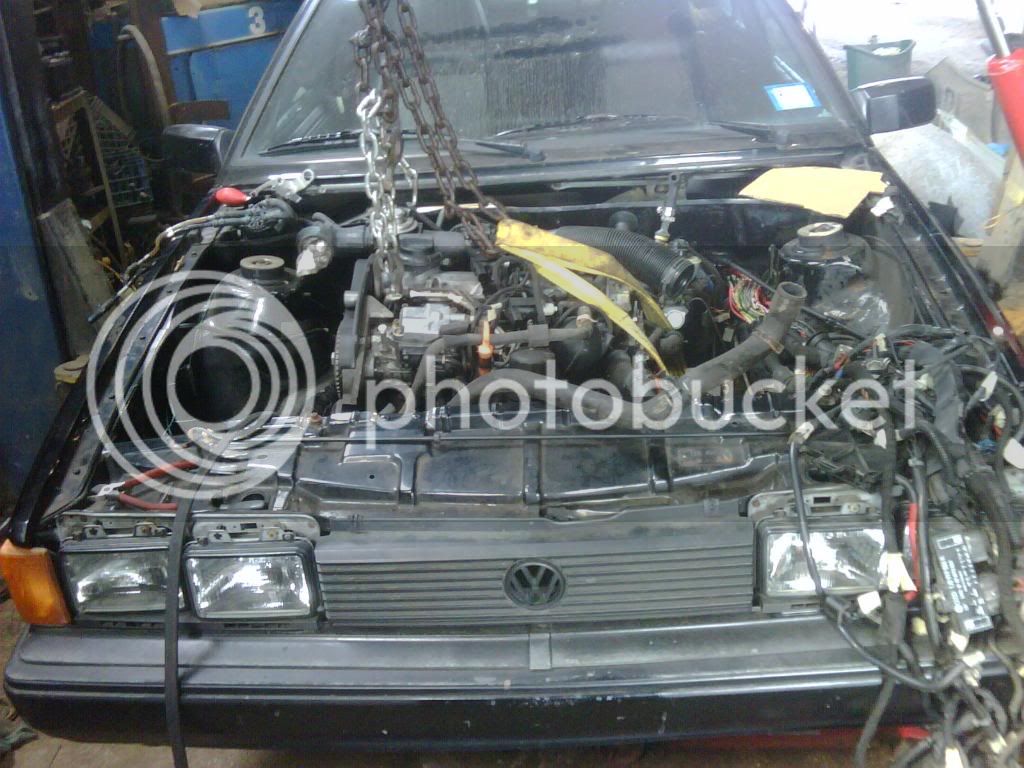 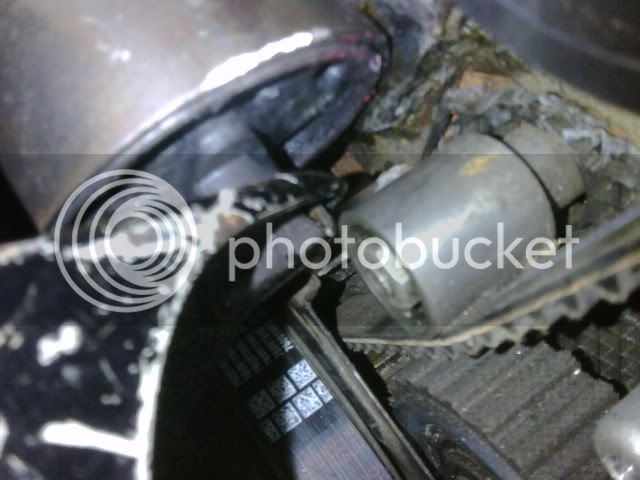 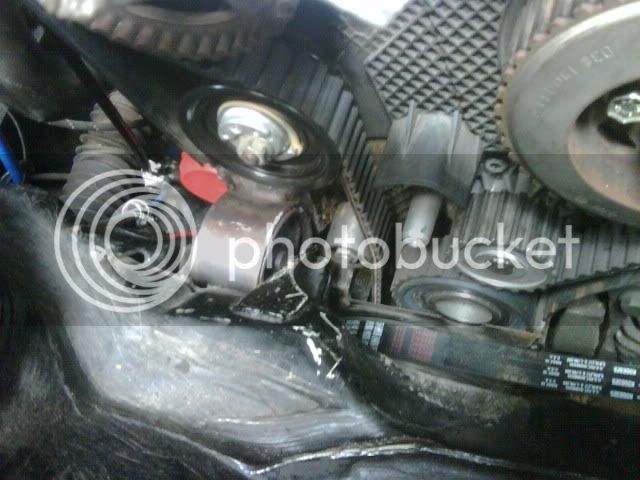 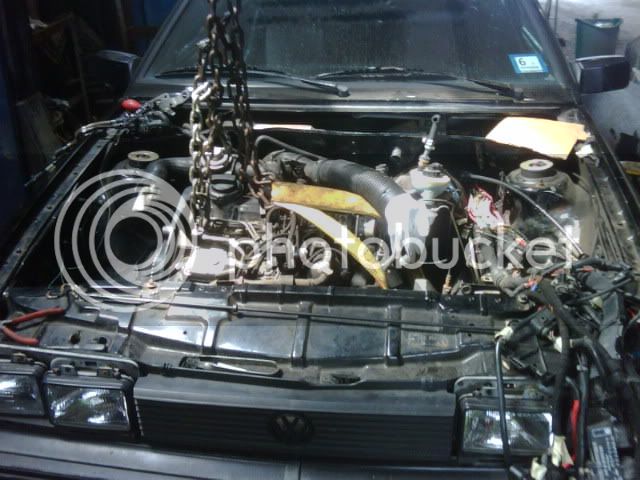 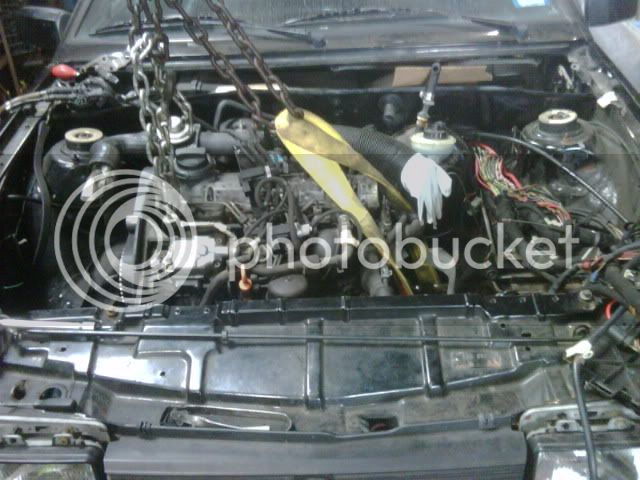 Yes my hoisting method is a bit ghetto.

Anyway, it's in the engine bay, *almost* in the position in should be in. The passenger side and driver's side transmission mount both line up loosely, but I can't seem to get both in at the same time. VERY frustrating.

The rear mount though is just completely uncooperative. It's taking me forever to get this in, it's SO close!

There's absolutely no way the radiator is going to fit. So I'm going to take one of the fans from the stock golf radiator and attach it to, what I think, is the scirocco radiator (the motor on that is ENORMOUS).

Oh yeah, the passenger side engine mount is ridiculously close to that roller for the timing belt, and I can't think of any way to give more clearance.
Last edited: Aug 12, 2009
M

I'm having flashbacks and deja-vu....

For my swap, I replaced the TDI TB tensioner with the tensioner from a VW 16V. Scirocco/Golf, 1.8L/2.0L, doesn't matter. I think I had to replace the mounting bolt too.

The TDI uses a wide-belt, the 16V uses a wide belt, 8V's use narrower belts.

I removed the idler that's close to the mount. I didn't want to have any future issues.

Also, you'll want to massage the frame rail with your BFH so you have some clearance for the serpentine assembly. It's easier to do with the engine out of the car.

You're probably going to want to rotate your oil cooler 180degrees, to clear your front motor mount.

And since your car is a mk1, there's no subframe. You may find it easier to slide the engine/trans into position under the car, then lift it up into the engine bay.

Thank you very much Mr. Dave.

I actually did some work on the frame rail with a torch and bfh. It all fits nicely now.

Thanks for the information about the pulley.

At first when I was attempting to drop the engine in, I thought I would have to instead bring it up from under. But then I looked underneath the car and saw a nice large K beam in the way. The Scirocco has extra bracing since it was more of a performance car in it's day. (Also had front and rear sway bars stock)

So, it wasn't feasible to bring it up from under. Instead of changed the length of the chains and made the transmission droop significantly lower than the engine, and then dropped it in that way. I put a 3 1/2 ton jack under the transmission and then lowered the engine to make it level. It's in *almost* the perfect spot right now, but that idler pulley

Once I get rid of the pulley, than i can modify my mount a little to make it fit right. I had re-made it stick out too far from the engine so I could clear the pulley, and that's why my transmission mount won't line up. So, now I'll remake that, again, once I get that new tensioner (hopefully soon!).

Would I be able to get a tensioner from a dealer?

"K Beam?" That is a lower stress bar, comes off in a minute. I have always dropped out and pulled the engines up in the earlier year chassis. Not till the Golf with the removeable front and true subframe did using a hoist become easier. Remember, if it was easy, everyone would be doing it. You'll get it. Cheers
H

Still waiting on that tensioner...

If I can't get this in by Friday, this is going to turn into a MUCH longer project.

H fitting pics. I burned up a fuel pump and removed the pump and the H fitting.

That's exactly how I was doing it. How'd you end up burning out your fuel pump?

the fuel filter was horrible:

I am in the process of the same swap almost... my first car was a 16v scirocco, unfortunately I sold it about 5 years ago. as luck would have it I found a super clean 2 owner black 87 16v just like my first one for $200!!!!! a tech kid bought it tear down and rebuild as an at home project, he did the motor rebuild but couldnt figure out the fuel injection. I so I towed it home <alexandria Bay ny> all the way from NJ. there is not a spot of rust on the car everything structurally is perfect!!!! such better shape than my old one. Well my little brother happened to wreck my moms 99 jetta tdi and we bought it back from the insurance company so now I had a motor. for me electronics is not my fortay so I have decided to go the M-tdi route. so just letting you know I am in just as far over my head! but I love VWs and i love working on them! I was wondering did you make all your mounts to put the alh motor in?

is the hood going to close ? isn't the TDI block too long for the A-1 chassis ?
H

It should be able to close fine. I mean, I have almost completely control on where the engine sits in the engine bay, I can make it as high or low as I want. From where I've set it, it should be perfectly fine.
H

All righty, Chittychittybangbang came down today to help me finally get my timing belt on with my new tensioner so I could eliminate the idler roller, get more clearance, and then put the engine in. Except, I don't know how to install the new idler roller, I have the bolt that it's supposed to go on, the bolt already in the block for the old tensioner is too thin, and the hole is too small to install the new bolt.

Sooo, this is frustrating. Also, Chitty brought up that I don't know how far to tighten the new tensioner because it doesn't have the notch that the original tensioner has.

So, to those who have done this before (it's been a long time since I've updated this thread and since I've talked with people about this swap! Besides G60ING I forget who else had given me advice on this and who recommended using the other tensioner...) and used the other tensioner (from a older jetta I think?!?) what did you do?

I really want to get back to this project, it sucks having it so far away.

I need pics. I can't visualize your problem.
H 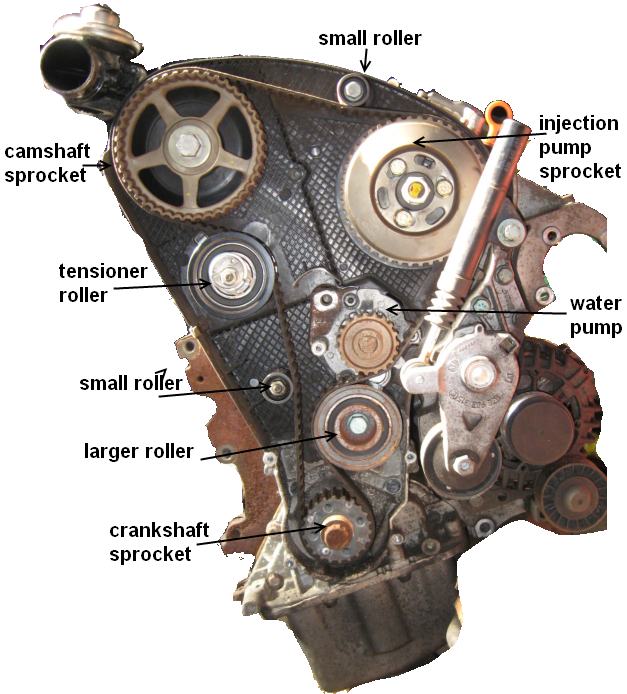 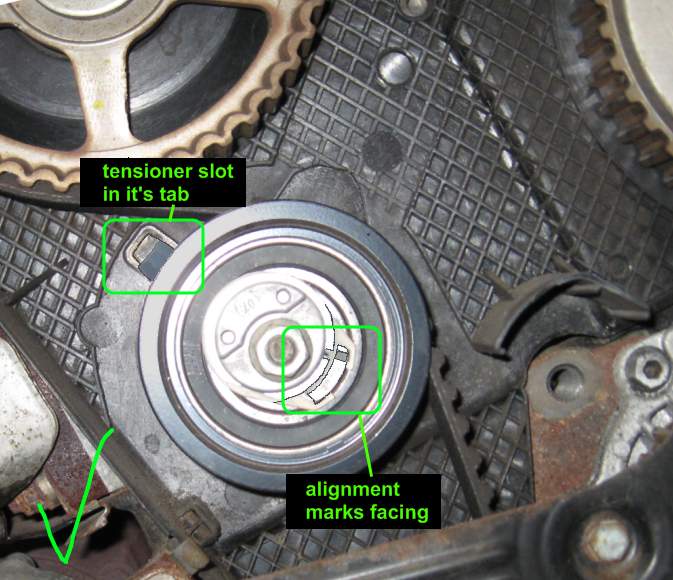 I have larger tensioner to install so I can remove the idler puller underneath the tensioner - therefore gain clearance for my right engine mount.

The problem is the bolt that holds the tensioner on (in the second pic, obviously the tensioner is installed on it, but use your imagination) is too small to fit the new tensioner, which is why I bought the proper sized bolt for that tensioner (which is fatter than the original).

the new one looks identical, but fatter (thicker diameter) and it won't fit into the hole the original bolt is in.
H

I forgot to take pics while doing this, I should have =/

Also, because the new tensioner does not have the alignment marks (shown in the second picture in the post above) I don't know how to determine how much tension to put on the new tensioner (once it's installed that is)

*unrelated*
On a side note - the first two pictures are actually of my engine anyway =P (taken from myturbodiesel.com when he first came down to help with my timing belt)

so you need a stud with different diameters? I may just have something like this left over from a passat 20V. How long does the stud need to be?
H 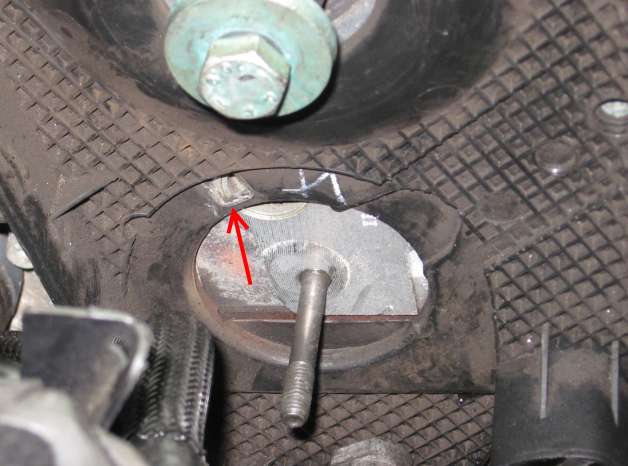 This is a picture of the original bolt.

that one looks like it has two different diameters. So do you just need one longer then the one pictured?
H

Nope, the one I have is long enough, the problem is it's too fat to fit into where the current bolt is threaded. The new bolt is significantly thicker than the current

I don't know the exact measurements but throwing out a number - say the original is 6mm the new one is 8mm, 33% larger diameter

I really wish I took photos. I need to hear from MrDave again about what he did.

Have you reached out to him?
H

I have, but unfortunately he has not been on the site in what almost a month.