In the words of Paul Simon:

Hope you have better luck than me. I lost a head gasket 150 miles into the drive. Now, waiting at airport to the plane to be repaired.

Sent from my Nexus 6 using Tapatalk
I

I'm leaving in the AM. Stopping overnight in Sudbury, Ontario, then on to Sturgeon Bay. See you all Friday!

The v's are in Ohio resting up for the drive to the FEST!
I

In your Jetta, I hope, Peter, not the big unit!

Heading out to Toledo in the AM, then the rest of the way on Friday. See you all there!

In Pittsburgh overnight after filling with B100 here.
Next stop is tomorrow just west of Chicago for another top-off with Bio. It's "only" B99, I think.
There's B10 at the public pumps 24/7, but the good stuff is hidden out back and accessible during business hours only).
I

I had about 45 minutes of panic trying to find my Passport. But I located it. And realized after that I also have a Passport Card, so I could have used that.

Lug_Nut said:
In Pittsburgh overnight after filling with B100 here.
Next stop is tomorrow just west of Chicago for another top-off with Bio. It's "only" B99, I think.
There's B10 at the public pumps 24/7, but the good stuff is hidden out back and accessible during business hours only).
Click to expand...

Sent from my Nexus 6 using Tapatalk
Click to expand...

IIRC Illinois has a bio mandate for diesel fuel so I decided to stop for fuel while I'm still in Indiana. Max allowed bio concentration in the BMW is B7.

Sounds about when we are leaving KY. See yah in route.

The weather in Green Bay is beautiful today. We just stopped at a Hardee's to get some food and take a break. Only about 50 miles and another hour to TDIfest.

EDIT: Was beautiful when we arrived. Now clouded over and gloomy looking.

Sent from my Nexus 6 using Tapatalk

Heading out from Toledo in the AM and stopping by a Portillo's along the way for lunch. Italian beef AND a Chicago style hot dog... Might also look for a pharmacy to pick up some Alka Seltzer...
I

Just got to Sudbury, Ontario about a half hour ago. Later start, rain on and off. But a beautiful drive, crossed into Canada in Odgensburg, NY. Shorter drive tomorrow down through the UP into WI.

Left Texas 7:00 am Wednesday morning. Drove to Goodman, Missouri and had dinner with an old friend who moved there from Connecticut. We worked together in industry in the 1970's in the Naugatuck Valley.

Today left Joplin, Mo at 8:00 am and stopped about 125 miles into Mo for coffee and fuel. Wife left her cell phone in the ladies bathroom at the fuel stop and we did not realize it for two hours. Doubled back to the fuel stop and wasted 3.5 hours and drove another 250 miles. Phone was turned in to the desk clerk. Got to 30 miles north of Chicago tonight at 10:00 pm and checked into a hotel.

Driving in Thursday and only have about 3 hours travel time left (but I put in a VERY long driving day today).

Took the 2014 Passat for comfort reasons. I still don't completely trust the reliability of the 2003 Jetta with 302,000 miles on it that I am bringing back to life for a trip like this. Maybe next year it will go. Wife is happy she does not have to ride in the "noisy old car".

I'm here. Internet was dog-slow at the hotel outside Chicago last night so I gave up trying to post.
I'm glad I chose to take three days to get here as my back is quite ache-y from sitting that many hours continuously. Even stopping every two and walking around didn't keep the stiffness from returning. I hope I can relax it before the trip back.

I left Hershey Pa at 9:45 Wed night stopped for the night in Somerset Pa at 12:45 Am left Somerset at 7 am yesterday and arrived here at 8:45 last night had some problems with double vision and my last 1.5 hours was harrowing to say the least 915 miles this place is beautiful! Thanks Organizers!

Nice place, nice area, we got here at 2:30 this afternoon. Glad to be out of the Texas heat.

Got home about an hour ago. Didn't want to jet out early yesterday but I had to be here by now today, and wasn't sure I could do the 1280 miles alone in one stretch. Stayed in Toledo last night, left there at 6 AM. Filled up about 20 miles east of Toledo, and have 1/4 tank left after 740 miles. 75 all the way, A/C on most of the time.

Raining and squally here, but the drive was pretty. Only traffic on the Mass Pike. Blew through Chicago yesterday afternoon, didn't even have to kick it out of cruise more than a couple of times.

What a great weekend. Great people, beautiful location, lots of fun. Thanks to Eric, Fred, and all the organizers. You done good.

IndigoBlueWagon said:
What a great weekend. Great people, beautiful location, lots of fun. Thanks to Eric, Fred, and all the organizers. You done good.
Click to expand...

Ditto on the above. Thanks guys and gals for a job well done!!

We are in Tomahawk, Wisconsin for a couple of days to visit with wife Evelyn's sister and husband. Took 3 hours to drive over here with no traffic this morning. Noticed the vacationers leaving Wisconsin in droves today. This afternoon I helped SIL's husband get his dock out of the lake they live on.

We will be heading to Texas Wednesday morning and hopefully arriving home Thursday night with a stopover south of St' Louis.

Great fest!! So nice to get out of the grind and see the country side. Must return to sturgeon bay again. Made it home - 1000 miles and 18 hrs seat time. Stopped about 4 times and no drama along the way. Great to see everyone again. Made a lot of HP this gtg if u add it up hehe. Jeff

Before leaving the hotel room I checked Google traffic and found there was an hour and a half delay on the Mackinac bridge. I pulled up a webcam and found half of the bridge packed with people! I googled some more and learned that they "walk the bridge" every labour day. The web page said it starts at 7am and "shuttle busses running until 2:30pm" so I figured it should be wrapping up by the time I get there.

I was miles away from the bridge when I hit traffic on the highway, so I stopped at this scenic lookout to check the map: 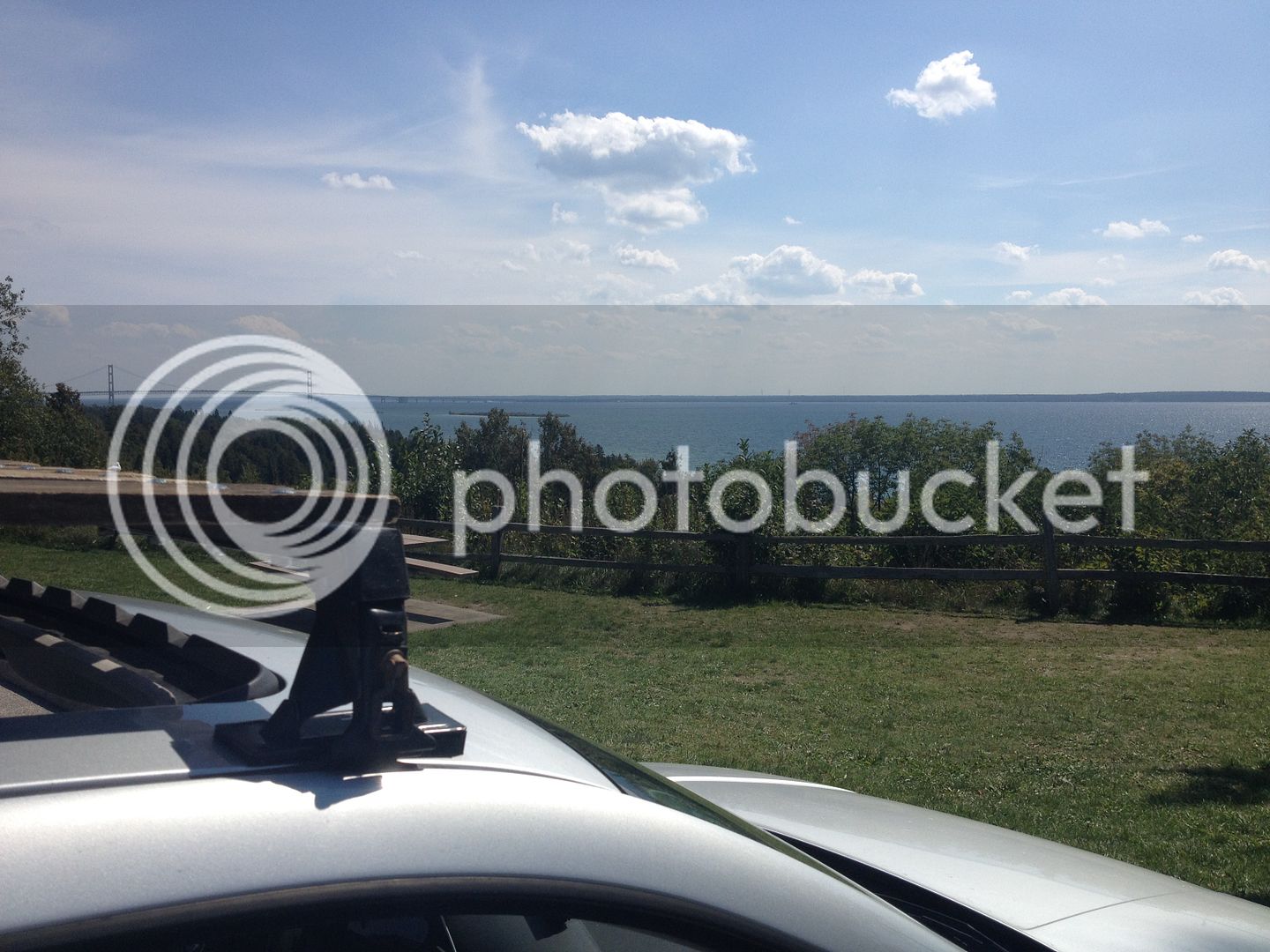 Then doubled back about a mile and found a quiet road along the shoreline: 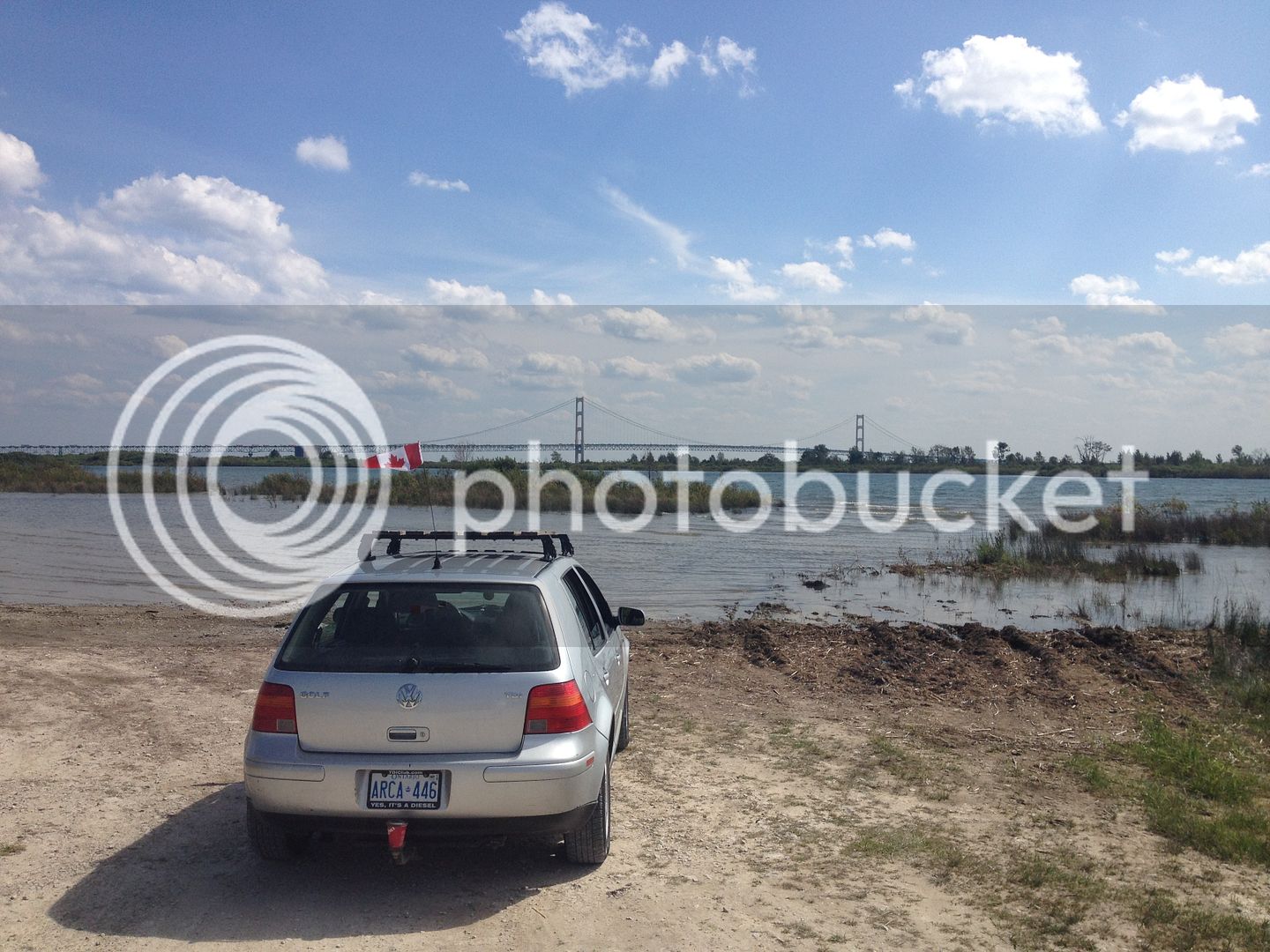 That road took me right to the bridge and I merged with traffic just as the last walkers were being escorted off! AWESOME!

The first time I had ever crossed that bridge was at night, it is much more epic (and a little scary) during the day! 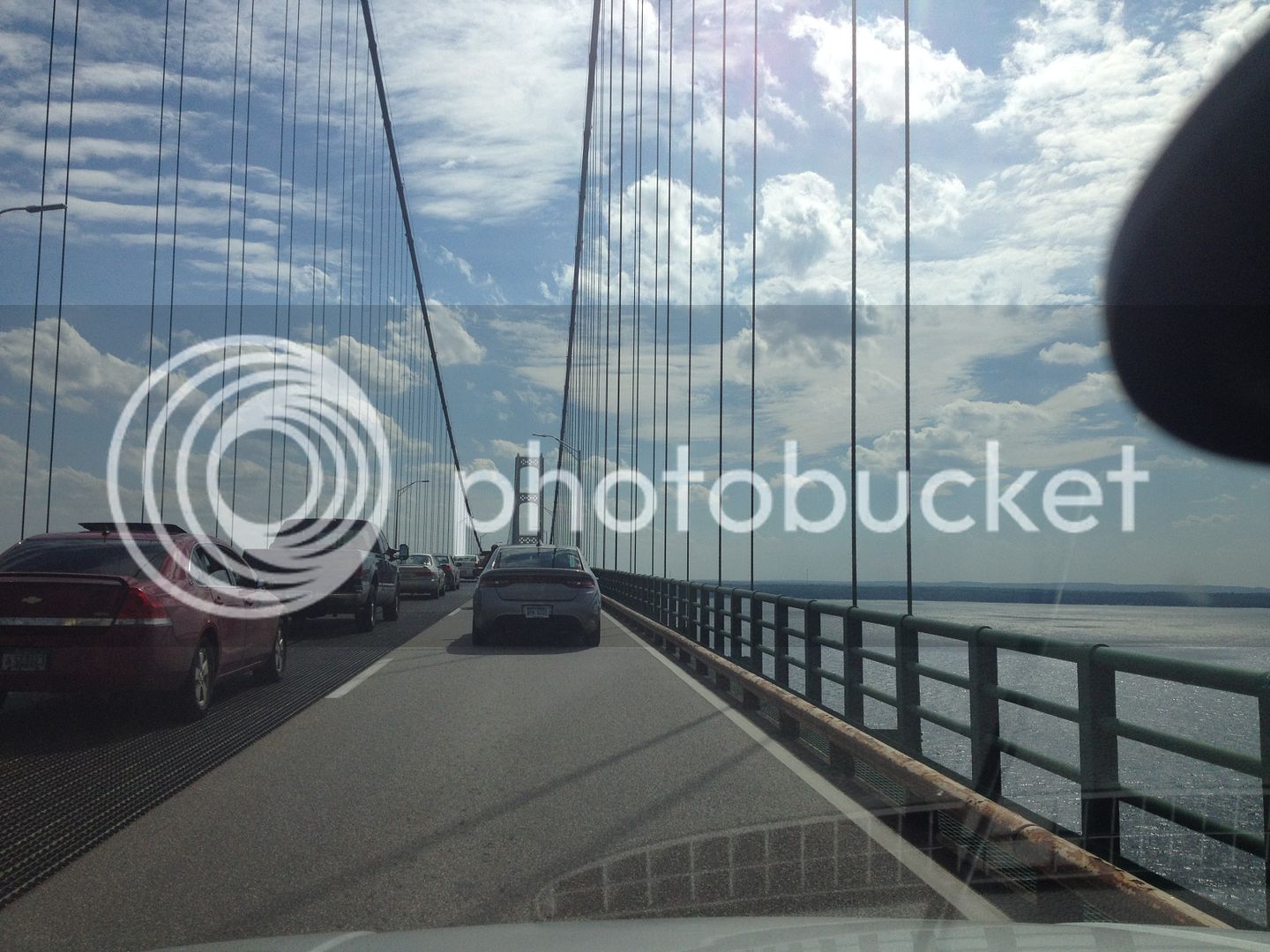 Left Sturgeon Bay at 8:30 yesterday morning picked up my wife at Ohare....just now arrived home wonderful trip I am done!

1280 miles driven, 20.6 hours of driving, 24 hours total trip time including our stops. I'm actually more wired than tired after a continuous low dose of caffeine and sugar from sipping lots of Coca-Cola along the way. (I'm not a coffee drinker)

Time for a nap after I unwind a little from the trip.

Did anyone else use their show and shine vehicle to haul a broken vw the day after TDIFEST?

I'm willing to bet I set the bar for the lowest mileage on Sunday for all attendees...including Jeff's beast of a van. 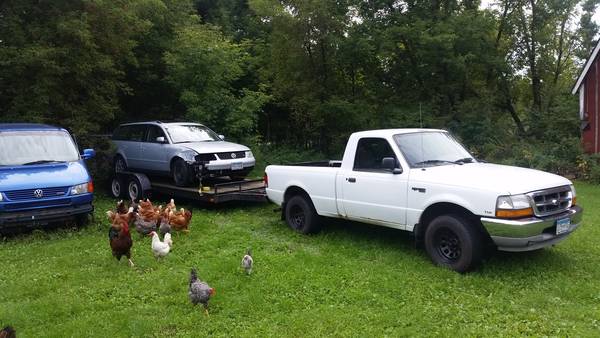