Wife has 2014 manual trans Tdi and wants a remote starter, was wondering if a frost heater heater would be a better option as the car is a diesel.

it currently has a factory installed block heater but i have read that i will not really warm up the car, it only provides enough heat to ease starting.
C

I will be very interested in others recommendations. My wife drives 2011 manual tdi. 35 miles on way. Car is in the garage, not heated. She also has concerns that car interior does not get warm until 20 miles in. Rural driving 60mph. She is grateful for the heated seats

my wife wants some heat and the windows to defrost, the car is parked outside.

A frost heater works but a diesel fires webasto is faster.

Not sure if in your mk6, but in mk5 jetta (not all of them) and in both my 2015 GSW and Passat, there is an electric aux heater.

In mk5 the heater would communicate with VCDS with its own control module. In the mk7 GSW it's called PTC heater and I could only find it when I looked at the HVAC coding. Still investigating where in VCDS for the 2015 Passat.

This electric heater is installed right next to the heater core, I read some mk6 wagons have them. If you undo the side trim by the accelerator pedal (one T20 screw) the heater core will be right there behind it towards the lower center dash, and in front of the heater core, there will be thick wires going to it, like in this post:

Moved the wife's car yesterday 2015 tdi se wagen and noticed a strong plastic/electric burning smell coming from the heater vents. I did a scan with the vag com and it did have some heater box codes. I'm assuming something with the aux heater melted and is melting or the harness to it either way...

Make sure if you do have the PTC heater, that is working correctly, and read up on how it comes on: max heat, 4+ speed, and foot+defrost.

Others have said remote starters are useless, as TDIs can idle forever and never create enough heat for the cabin.
Last edited: Dec 8, 2021

I got the stock heater and it usually gets to around 60C after plugged in for around 3 1/2 hours. I have heat instantly and I let it idle for a couple minutes then start driving. Temp gauge goes up pretty quick as soon as I start driving.

All MK6 TDIs in Canada came with the AUX heater from what I know.... not sure if the States did too.
There's an SSP which documents what pre-requisites need to be met in order for them to kick in.... I can't recall off the top of my head now, but it's like heat control on 80% or more, defrost on, battery voltage and ambient temp at a certain lever.......
If you have the OEM block heater as mentioned by @MrCypherr they work great. You should also bock the lower grill portion with 3/4" pipe insulation to restrict the airflow to the rad. Some, in cooler climates, block even more of the "intake" area. For me, I found that blocking off just the lower portion was sufficient to not drop my operating temp while cruising at speed or while idling in traffic during snow storms, etc.

A remote starter, or idling the vehicle to warm it up is useless as the engine is far too efficient.
Last edited: Dec 9, 2021

Activation conditions
The electrical auxiliary air heater is activated: - in the case of the 2C-Climatronic and Climatic: automatically via the CAN data bus; in the case of the heating system: if the occupants set the heating output to over 90% at the operating unit (analog signal), - if the water temperature is below 75°C, - if the engine speed is higher than 500 rpm, - if no load management system is active and - if the ECON button is not pressed

Obviously, if you don't meet the conditions, or if you have a struggling battery\charging system due to drained battery, it won't work.

Dannyboy said:
Mk5 and mk6 with the PTC heater I completely disagree that they never warm up. They warm the interior toasty and loads the alternator up which loads the engine up and brings it up to temp quicker. I even ran a log once...
Click to expand...

I think this assumes car has a PTC heater and that all conditions are met for it to come on: full heat, blower speed...

If there is no aux electric heater, then it will be the same as mk4 or older cars, freezing till you load the engine.

Yup, there's very little waste heat from our TDIs at idle, so a remote starter is not much of a help in the warm-up department. Making the engine work is the only way to get things warmed up.

Yeah I have mine on Max heat and blower 2. It's enough to defrost. If it's real cold I ride the breaks. Heats it up fast.

The only thing it's heating up fast is your pads\rotors\bearings.......

Recently did an EGR removal on the '09 along with the "off-road" package. NOx trap wasn't up to snuff lighting the DPF error light in the cluster. (Got 200k out of the factory exhaust system w/ the dieselgate fix) Its been coldish around here lately and I most certainly noticed the extended warm up times in the mornings when headed for work.

I really had no idea that the exhaust flapper backpressure along with the EGR coolant/heater core exchange would produce that much heat that quickly into the heater core/coolant system.

This car is my DD atm, and as I've aged I'm enjoying the creature comforts more. The longer "climate warm up" is certainly noticeable and not desirable to what I've become acclimated to. The heated seats help a ton. I am seriously considering just an aftermarket block heater or other type of coolant heater, knowing it works very well in my Ferd 7.3, but that diesel isn't a VW diesel. The 7.3 after being plugged is like 5 minutes idle to circulate the warmed oil to heat the rest of the engine/coolant with noticeable effect.

Wife was jealous with the ALH, and would fire it 5 minutes, then 10 minutes, then 15 minutes early before leaving on cold morning. Never made a difference. Coolant heater helped, but it doesn't return results like the 7.3 "oil in the pan" heat element.

This thread will certainly be relevant to my interests as of late. I don't like the cold.

TurboABA said:
The only thing it's heating up fast is your pads\rotors\bearings.......
Click to expand...

Yes. It also puts a load on the motor and trans. I'm a idle for 30 sec and takeoff kinda guy. Loading the engine warms it faster. And I've got 51k on these pads and their at 60% life. I really only do it on the -20 days while driving out of town.

Dannyboy said:
You need one of these 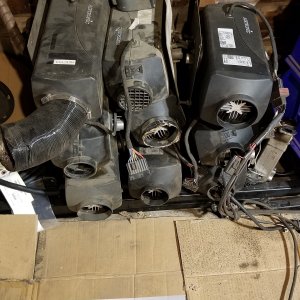 I'm good with my rad blocked and my heated blanket. 15 min and I've got heat. Too lazy to start it 15 min earlier. Well I just dont want to get up earlier.

Lol... Aux heaters are programmable so I don't know how you think they work. I'm talking about the fancy parking ones. There's also less fancy once that only operate once the engine fires up.

If you really want an awesome solution (not to mention one that's 2x as powerful as the D2 shown above), look up the OEM Auxiliary and Supplemental systems that fully integrate into the vehicle's controls are were available over the pond..... that's what we should've got over here in the north, but VW cheaped out as usual.

If you're not following, look up SSP502

Retrofitting the OEM Thermo Top V into our NA sedans is an awesome approach and provides ideal features and functionality.

It's unfortunate that parts are so hard to source and the costs can be significant.