(Due to frequent e-mail demand from new members, here it is again.)

Since prevention is much better than redemption, it makes sense to replace the weak Relay 109 ECM Circuit Fuse before it gets too hot and leaves you stranded. The upgraded version of the new Relay 109 circuit has heavier contacts which can withstand the heat better.

This relay switch (whatever name you want to call it) basically sends power to every sensor in the car as well as through the ECU. Failing ECM Load Reduction Power Relays have been known to damage ECU's when they go bad, not to mention the safety factor involved when they decide to die while you are idling in traffic or traveling on the highway!

Here's what I suggest you do:

I also recommend ordering two of these critical parts in order to keep a second newly-designed circuit as a spare.

Installation is literally a snap. After removing the driver's side under-dash panel (two T-15 Torx screws), simply use a flashlight to look-up where the fuses are and remove the largest fuse - Relay 377 - and carefully set it aside.

Directly above the empty slot (where Relay 377 used to be) is Relay 109, which can now easily be removed and replaced. Everything can now be put back together in reverse order.

Note - The newly-designed Relay 109 is gray in color and slightly smaller than the older black model, which tends to fail under hot temperatures.

Here are a couple of diagrams (courtesy of MIGOLFGLSTDI) relating to replacing this Relay 109 ECM Power Fuse: 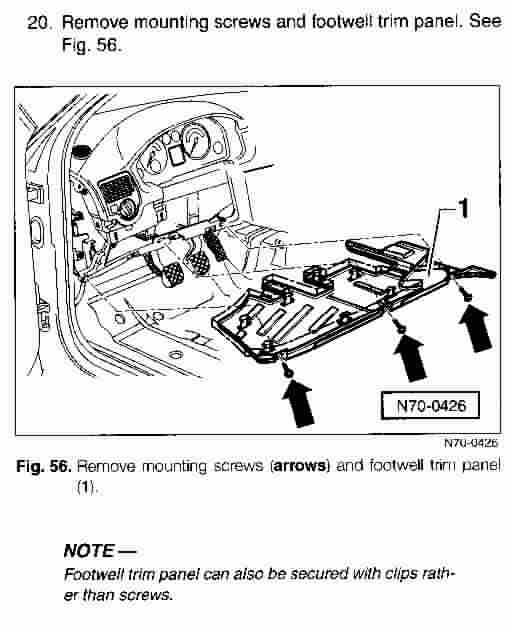 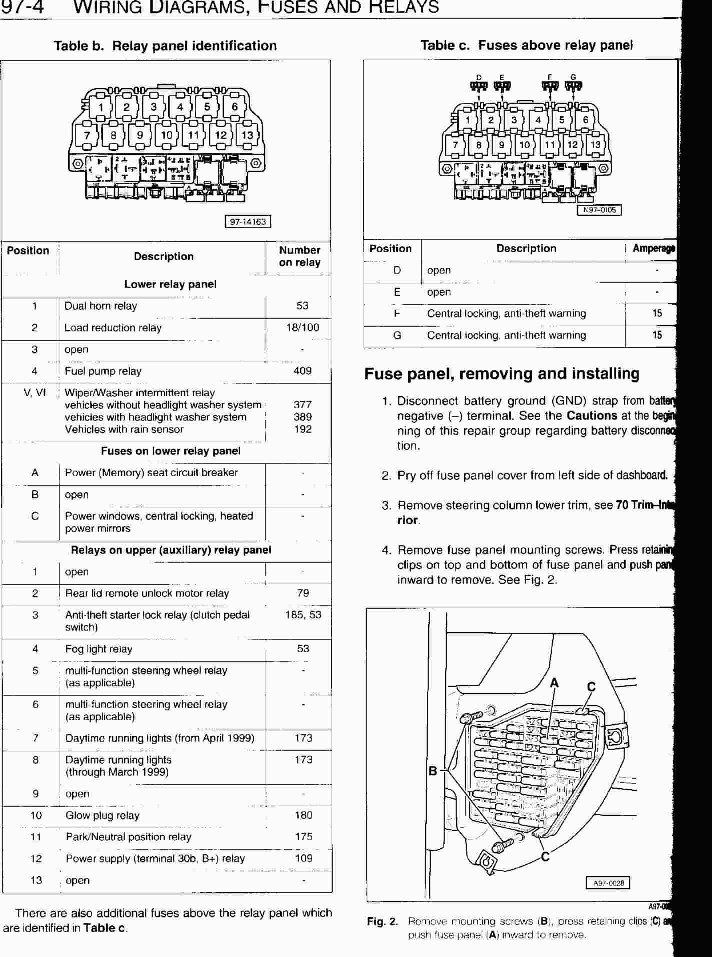 See also my old thread on this same subject.

Thanks Turbo for the post.
(New Member, but Fred TDI reader since '99)

I just replaced 109 relay and will get a spare. The replacement cured some of my problems that the Dealer won't / couldn't replace since May!
I have been on "109 relay" post so won't bore.

One other point on replacing the "...PT-109..." Relay.
Maybe my hands are to big, but I also remove with three screws the panel below the steering. Additional to the diagram MIGOLFGLSTDI shows.
Be careful as TurboSteve noted that the numbers on relays you pull or replace can be inverted. Speaks volumes to the quality...don't you think?
My pull of the 377 relay that Turbo notes was inverted and the new 109 relay went in inverted from original.

Anyway I find it interesting you note: ..."Failing ECM Load Reduction Power Relays have been known to damage ECU's when they go bad, not to mention the safety factor involved when they decide to die while you are idling in traffic or traveling on the highway!"...

I'm wondering if my ECU is now damaged. How can Dealer check if ECU is damaged?

Can this relay damage other electronics?

I am now a believer, it is easy to think that these TDI's are Diesel juggernaut's and that these posts of electronics '...won't happen to me...'
Know the weak points and be ready.

On my way to the treads...TurboSteve
Thanks to MIGOLFGLSTDI too.


Edited since picture was incorporated above.

Good advice that should serve as a friendly reminder, especially in the middle of a hot summer.

The ECM also communicates to the instrument cluster electronics and transmission control module (on automatics).

As a result of this, you can see why if the relay starts to cause power to flicker, or voltage drops, for all of these components, the results can be "unpredicatable" and none of them desireable.
H

How long or how many miles would it take before this relay 109 would go bad? I am waiting for my 2002 Jetta TDI to come in. Do you think my car will have the new gray relay or should I check and see if it has the old black one yet?
J

It will very likely have the new gray one. There's not telling when/if one will go bad. I've got a total of about 164k miles across 3 TDIs (90k on the oldest one) and have never had a 109 problem. My sister also has had her TDI since '96 and hasn't had a problem. But a friend of hers has (also a '96).

Maybe that's why neither of mine failed. They aren't 109 after all. They are actually 601's!
And just this morning not only was my entire newspaper printed upside down but the fold was on the right!

Update since replacing the '109'.
I took my car back to clear codes and check what the Regional Rep. suggested to Dealer. They couldn't find any problems after clearing codes and didn't charge me the two hour labor they were going to.
Driven under all conditions which have brought on problems before replacement,have had no problems since install!


I asked Dealer if there was any way to check only the 109 relay. They didn't have an answer. (Dealer originally didn't know what a 109 relay was...601 may have helped)
Is there any way to check just the '109'?
I now have an extra '109', but I'm wondering if these newer 'gray 109's' are OK.
More importantly I would like some piece of mind that there isn't any other 'hidden' problems.

It seems to me from reading most of the 109 trouble is on cars with 2 years, 40K+, Maybe 109's should just be repleced at your 40K service...
I have petitioned with the NTSHA on 109 as saftey concern too.

I had starting problems, cranking well but not starting. The glow pug light was not coming on.

After replacing relay 109. It started in one crank, and good since then, 1 week.

I think everyone should petition NHSTA on the 109 relay. I also, feel it is unbelieveable that VWofA doesn't look at 109 relay's, inform Dealer's and Tech's etc. My proiblem had been going on since May!

Thank goodness to all the support here on Fred's...

Relay 109 is for sure the problem.
The latest design is a grey plastic style replacing the old black plastic style. My friend's Jetta was intermittantly quiting on him and his relay smelled burned when we pulled it out. I bought a replacement for my Golf and keep the orginal one as a spare. It cost about $20 from VW. It's an odd looking relay unavailble from the parts stores at this time.
B

So as an emergency road repair, you can jumper the fuse connector from fuse 12 to fuse 28 and bypass relay 109 altogether. Just pull the wire when you shut off your car...

Fuse 12 is the unswitched power source for DLC.

All you need is a short piece of wire with male fuse size pins at each end... If you don't have nice pins, you could probably just jam a wire into the fuse recepticles.

Thanx for this info all. I checked my Relay 109 last eve, I am one of the lucky ones. My 01 Golf GLS TDI has the new gray one.

Car was produced 04/01, so it must be just when they cut the new gray relay 109 into production.
J

Dont count yourself out yet Ruff... Dealer just replaced mine on a 01 Golf TDi with 18k...
R

No need to replace a perfectly good working Relay 109. That would be silly. I had mine replaced over two years and probably 75,000 miles ago, and the replacement was "the old style", and I haven't had a problem since.

The failure rate is low, and when it fails, ususally will not leave you stranded. It is something that TDI owners need not worry about.
J

If you ever find yourself driving in the middle lane of a 3 or 4 lane highway with very heavy traffic going 75 mph, you might want to think about what would happen if the 109 failed on you in that situation.
S

<blockquote><font size="1" face="Verdana, Helvetica, sans-serif">quote:</font><hr>Originally posted by justme:
If you ever find yourself driving in the middle lane of a 3 or 4 lane highway with very heavy traffic going 75 mph, you might want to think about what would happen if the 109 failed on you in that situation.<hr></blockquote>

The out-of-court agreement came two months after The Associated Press reported that at least 11 deaths and 31 injuries were blamed on stalling in Ford vehicles equipped with the ignition device. The AP also obtained internal Ford memos that show the automaker had evidence its ignition design could make engines suddenly fail on the road.<hr></blockquote>

So the possibility of injury does exist if a vehicle stalls unexpectedly.

Ric Woodruff, NOT TRUE. Replace the old one ( black ) to the new one ( gray ). This relay can NOT handle the load that is required. I took apart both relays and you can see the difference in construction. The solder connections on the old relay are replaced by spot welded connections. I got stuck in NH on the highway while driving at 65 mph. The engine light came on and the engine stopped. I coasted to a safe stop, mainly because there is little traffic in NH. DO replace this relay if you have the old one. It does not take that long, and is well worth you saftey.

I have to agree, it is a sudden, very abrupt loss of power. I am still trying to trust the car again, it shook me up pretty badly, and I'm not easily shalken. Thanks goodness I wasn't trying to pull out in front of anything big when it went. I truly believe it to be dangerous. Say what you like, it won't change my mind.
B

I replaced mt 109 this past weekend. I'll keep the old one as an emergency spare. Mine never gave me any trouble, but I'm glad it's out of there...
H

Originally posted by Hashimoto:
Is the Relay 109 problem solved on 2002 model VW's then?

Too many pages open, I got confused.

I just changed the 109 relay, after a little problem since i didn't know where to plug it back. But since i saw the relay table here, i could fix it.
1 only problem occured which makes me thinking, maybe it was not the relay.
After replacing with the new one, 109 was still making the clicking noise, and nothing happens. The only way we could start the car is to make a short curcuit to the fuel injector (bypass blabla solenoid or something - my friend knows it better). then it was released and started without any problem.
Could not be the 109 relay bad, and that solenoid thingi is bad?

To safely change the Relay 109, do I need to disconnect the battery? I just want to make sure I don't fry the ECU/myself.

Thanks very much!
D