Project Kill Da Auto Wabbit!, Or how I learned to love the Manual Swap

Having re-wired a car to accept the steering wheel cruise (and stereo) controls on a MFSW, I'll conjecture that the cruise control is fully managed by the CAN wires, so it doesn't need whatever wiring you'd change on an auto-to-manual swap. I'd also guess that while cruise control itself works, I bet that depressing the clutch pedal does not disengage the cruise control like it would/should.
C

1. If you haven't switched from auto to manual via VCDS it will be running off whatever the default was for the car that the ECU is from. For mine when I did the switch on vcds it definitely ran "richer" and I had to adjust the IQ.
It should run very well still unless you changed injectors and fuel pump with the swap (manual injectors and pump on an auto code), and are running the opposite. Then I could see it running lean at which point you should adjust your IQ ASAP. You could be increasing ring wear with the higher cylinder temperatures.

2. The vss is absolutely necessary. I ran it both on and off and it runs way rougher with the sensor off. Especially at lower rpms.

I would start with what you know is wrong and go from there. Get the car switched to manual. Adjust IQ. My guess is what you are describing it could be running lean.

Hey Grashopr, I did not have to do anything with the VSS except plug in. Connectors the same, and speedo works. Aside from cruise control not having the ecu work done, the beast is not giving me any fits. Had some along the way, but it was not so bad...
cheers,
Douglas
S

I'm completing an automatic to manual trans conversion on a 2002 Golf TDI. The car is running great and I've got all the coding issues resolved.

I've been reading this thread for about a week now trying to figure out how to do the wiring updates to get 1. the backup lights to work, 2. the clutch starter lockout circuit to work and 3. get the cruise control clutch cancel to work.

I believe that I have items one and two, I have under control.

I have read up to about page 40 and have not found consistent, clear instructions on how the wiring for the cruise control clutch cancel should be implemented. There are directions which require connections between the TCU & ECU, others that only have ECU connections and none are unambiguous as to the connections, because multiple vehicles are covered and wiring color codes are often not consistent.

Can anyone point me to the final, clean instructions for how to wire the cruise control switchover in this 90 page thread?

Been a decade since I did my swap. But I had sent an email to a friend with swap info afterwards. Here's the info I have. Word Doc attached has some of the wiring bits. The first one is this thread, 2nd one is no longer in existence but can probably find it on archive.org metal man was great for parts of he still exists.

skraeling said:
I'm completing an automatic to manual trans conversion on a 2002 Golf TDI. The car is running great and I've got all the coding issues resolved.

I've been reading this thread for about a week now trying to figure out how to do the wiring updates to get 1. the backup lights to work, 2. the clutch starter lockout circuit to work and 3. get the cruise control clutch cancel to work.

I believe that I have items one and two, I have under control.

I have read up to about page 40 and have not found consistent, clear instructions on how the wiring for the cruise control clutch cancel should be implemented. There are directions which require connections between the TCU & ECU, others that only have ECU connections and none are unambiguous as to the connections, because multiple vehicles are covered and wiring color codes are often not consistent.

Can anyone point me to the final, clean instructions for how to wire the cruise control switchover in this 90 page thread?

I've done two swaps now, and both times, I've sworn to myself that I was going to write out better instructions on the clutch wiring because - same as you - I was beyond frustrated with confusing and ambiguous wiring instructions. And both times, by the time I finally figured it out and got everything working, I wanted to get to put that behind me and get to the next project.

If you haven't seen it yet, the wiring details in this document from @boertje (for auto-to-6sp. swap, but wiring is the same) at least got me in the ballpark. And then I trial-and-error'd my way to the finish line.
S

Thanks for the info.

I am still seeing inconsistencies. I think that some of them may be due to different ways of achieving the same result. This is where schematic diagrams would remove all doubt. Describing wiring connections verbally is not the best way to go. If wiring is described verbally, it should be for only one clearly identified vehicle and both wire color codes and pin connections should be listed for every connection.

I'm going to assume that the following wiring diagram is correct and see where it leads. This wiring diagram makes the most sense to me. There is no socket at ECU pin 66 currently (in my formerly automatic transmission 2002 Golf TDI), so I will need to add a wire to that location and route it down to the blue/black clutch relay location under the dash: 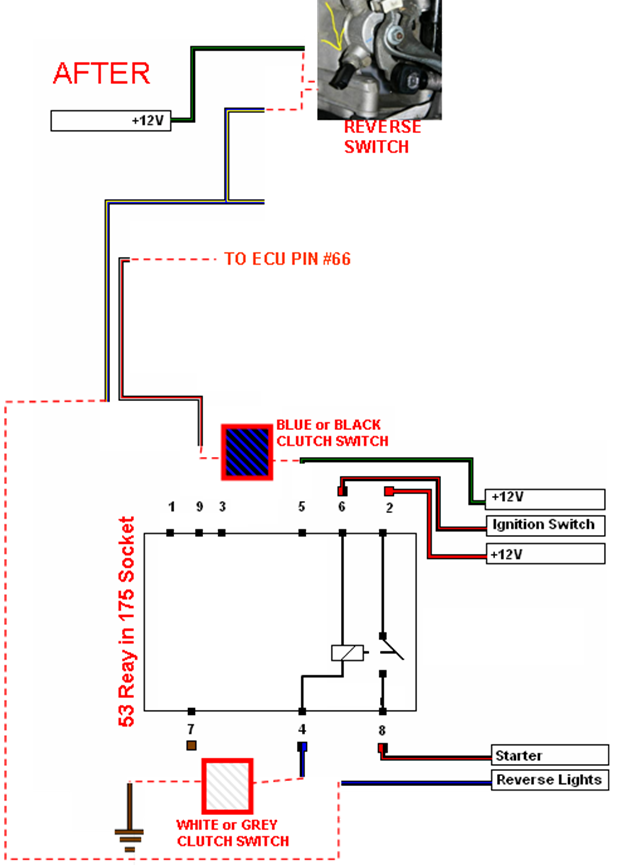 I got a 2001 manual Golf TDI harness from the junkyard and pulled the socket and wire from ECU connector pin 66 on it (it is white with a red stripe, btw). I will insert it into the ECU connector in my 2002 Golf and figure out how to route it to the 175 relay (which will later be replaced by a 53 relay).

I am not going to mess with moving the socket on pin19 in the ECU connector to the pin 66 location, as is instructed in other posts. I may use some wires in the TCU harness to help route the newly added pin 66 in the ECU connector down to the clutch relay location under the dash, but I don't think any TCU harness connections are necessary and it adds confusion, if that isn't explicitly stated.

I have had to undo connections that I made previously that didn't work at all. The 175 relay seems to be the issue with those approaches. If the electronics within the relay isn't gutted, and the relay is re-wired internally to be only two standard relays, I don't think any of the approaches leaving in the 175 relay can work. The 53 relay is just a single relay with no extra electronics inside.

The second relay (of the 175 relay) is not required, since the reverse light switch on the manual transmission can directly handle the current to the backup lights (as can be seen in the wiring diagram above).

The clutch starter lockout is already mostly wired (pins 2, 6 & 8 on the 53 relay) - you just need to add the white/grey clutch switch connection to ground (on relay pin 4), to prevent the starter from being allowed to crank, when the clutch pedal is not pressed down.

Thanks.
I will post later to say whether it worked or not. So far the wiring part of the job has been a nightmare to figure out. If the above wiring diagram is correct, it won't be a big deal to wire up.

That guy with the goats

Amazing this thread is still going, only 16 years later. The OP actually helped me do two swaps, one of which is my Ute project. Fun stuff!
G

I found the worst part of the job was to see the numbers on the 175 relay socket. I took a picture with my phone and wrote the numbers with a sharpie on the relay socket. I also printed this whole document this document from @boertje off and put it in a 3 ring binder. I then used the margins to make notes for when I do this again. And if I find another cheap automatic it will happen again. The asking price for these cars has tripled in the last year or so.
A

I'm still around, but yeah, the number of people doing the swaps dropped to basically nothing, and I'm unofficially retired from doing car stuff.

the worst part about the web is nothing is forever, I'd say 99% of this thread is people looking for wiring help, even with the documentation, pictures, etc. I still get phone calls with people asking for help.

I'd say GEFP is probably the closest to being right. The ALH swap is the best documented on here (somewhere on the 90+ pages), where the mk4 PD engines are the worst.

If you start from the back and work your way forward you'll probably find more of the PD information that way, and might only need to go 40 pages deep.

I'm probably the one to blame for the length of this thread more than anyone since I did this in my 1 car apartment garage, with no lights, and when "cell phones" didn't come with an apple logo. We walked uphill both ways in the snow, and liked it

Glad to help any way I can, if you run into any issues, ask here, and there's thousands of people who have completed this swap. If I don't know it by heart, someone else also does.
W

Well, for the last month or so (Saturdays) I transformed my 2002 VW Jetta TDI Sedan from an automatic to the five speed manual. Of course all of this followed a month of reading the forums. Thank you all for your wisdom.
I was lucky enough to purchase the majority of the parts from a gentleman NW of Harrisburg, PA.
Parts collected (used);
Transmission, shifter, axles, starter, egr delete, larger turbo with manifold and leather interior.
Parts bought (new) for the swap;
Sachs Clutch package, throw out bearing, inner cv joints, manual hp power steering line.
I rebuilt the front suspension to include slotted and drilled rotors on all four corners. Shocks and struts were replaced last year. The majority of the new parts came from Rock Auto.
All said and done, this car is a blast to drive (It also has the Malone 1.5 tune), especially for being twenty years old.
Truth be told, I still have not tackled any of the wiring. Still need back up lights and cruise control.
Wife asked me one weekend how it was looking. I told her I had two thoughts. One: that it's going to run like a champ or Two: we're going to own a ten thousand dollar paper weight!

I have left the ECM wiring out...and so have no cruise. The rest is not so bad; follow boertge's written instructions and reverse worked and so does the clutch to start bit. That I would not mind a shorting switch just in case I want to start it in gear. The rest of the cruise wiring underneath at the 175 relay is done, but that multi-pin ECM connector is scary... LOL
cheers,
Douglas

I just did a 5sp swap (fourth one now, I think), and while the wiring isn't my favourite part, I think I finally wrapped my head around it and could do it without staring at the wiring diagrams incessantly.
And that's it for wiring in the plenum chamber.
The larger PITA for me, mostly due to confined work area, is that wiring at the 175 (soon to be 53) relay.
You must log in or register to reply here.
Share:
Facebook Twitter Reddit Pinterest Tumblr WhatsApp Email Link
Top