Old rallyvw TDI at pittsburgh would of wheels

the old tdi rallyvw car was at the pittsburgh world of wheels this past weekend, I thought some of you guys might like to see. I noticed it as soon as I walked in. I didn't get a chance to talk to the owner, he was talking to a bunch of people, and I went back later and no one was around. There was a business card from a local shop www.dominationchassis.com . There are a bunch of pictures on their site too. They changed to rear suspension from a neon and drum brakes. I don't totally understand why, but it's nice to see the car is still alive. I wish I could have talked to the owner though!!

Had no idea it was sold. Glad to see its still out there though! Confused about the neon suspension and drum brakes too. 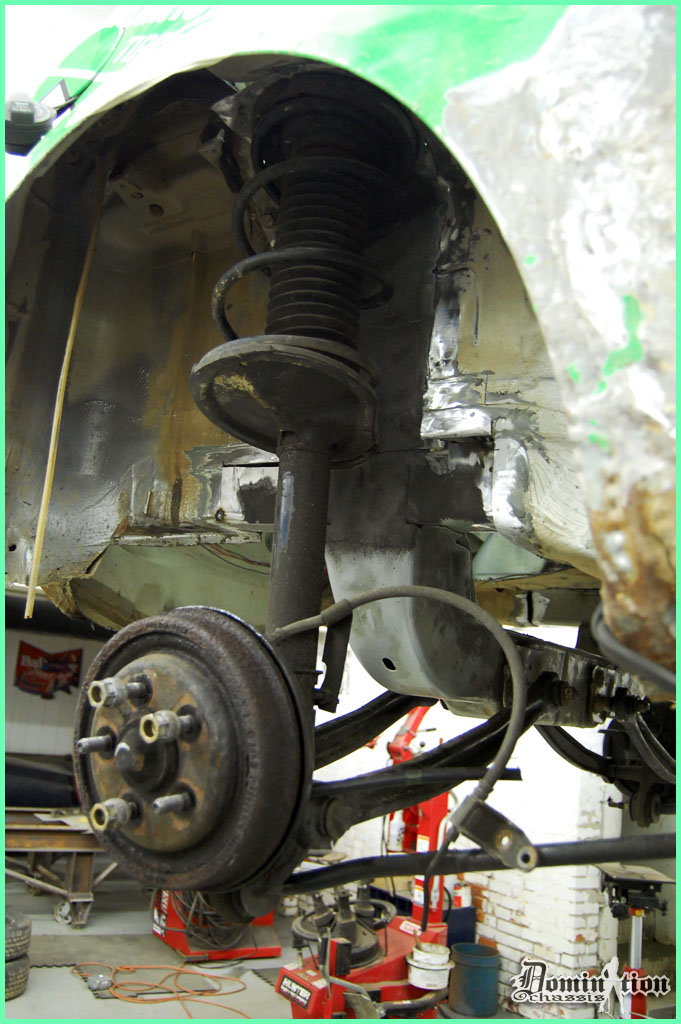 not to me
looks like the picture your looking at was taken before sandblasting, undercoating and fitting of these 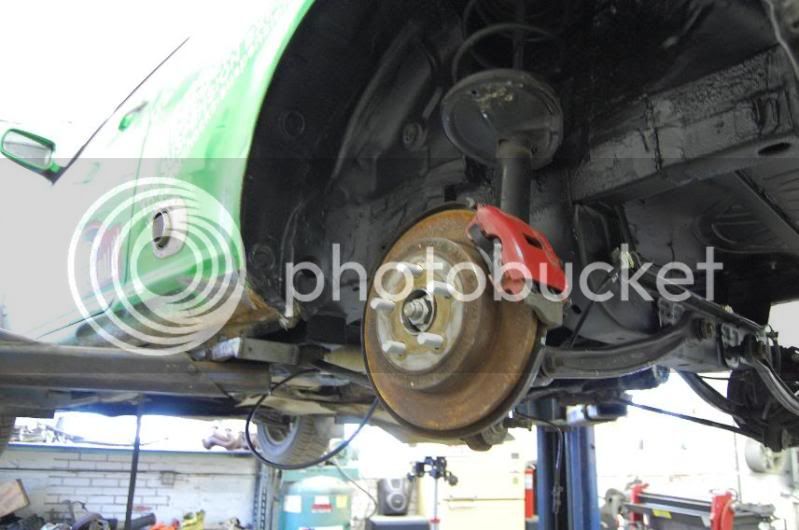 Those would be brakes from a srt-4 neon

that explains
they didnt look like the calipers from the MK4, and as he said the neon would most likely have drums.


so there you go. looks like they also fitted the rear disc/caliper from the srt4
P

Ben Dur said:
that explains
they didnt look like the calipers from the MK4, and as he said the neon would most likely have drums.


so there you go. looks like they also fitted the rear disc/caliper from the srt4
Click to expand...


regardless, I still don't understand why you would go through all of that to change suspension. I just can't believe the neon suspension is an stronger than the VW even for a racing application????

Think of it this way.

The VW rear suspension is a torsion beam - it's designed to bend in normal operation. Therefore, it has to be somewhat soft, and when subjected to extreme conditions, may STAY bent.

The Neon rear suspension is not designed to bend in normal operation - it has more moving parts, but they're all moving on bushings and ball joints and such - no metal except for the springs are subjected to any deformation loads. Therefore, it can handle these loads far better.

Also, the Neon rear suspension, being fully independent, can allow for more tuning of the suspension.

he is using Prothe parts on that rally car...

To stiffen the stock VW beam entails not much more than boxing in the open cross-car section. The added weight of that small modification is, I suspect, less than the weight added from the section of Neon chassis that had to be grafted on for the lower arm mounts. Let alone the added gusseting they added for the new upper spring perches.
Not much of the VW axle is below the car's floor and it therefore better protected, or more easily hidden behind skid plates, than can ever be done with the lower arms from the Neon.
Will they use an anti-roll bar with the Neon bits? They'll need to to even come near the inherent properties of the (unboxed) stock VW axle.

Yeah, I admit the VW trailing beam axle is simple and crude, but it works, and it works darned well.
If maintaining suspension geometry through full wheel motion was so important they wouldn't have used a macpherson strut arrangement, and the same logic would have the Golf's front suspension switched out to an Audi A4 or B5 Passat's 8 link set-up.

So the Neon graft is heavier (sprung and unsprung), has more moving parts, hanging lower...I still don't see that a beefed up VW beam wouldn't have more than enough advantage to negate the "Oooohh!" factor of the IRS.

Wow, my first post on TDIClub in nearly two years!

I can tell you the rational for switching out the twist beam axle was based mostly on durability. We've tried a number of different methods to strengthen that rear beam. Tried the VWRacing method, tried custom plates to give more triangulation (though the fuel tank limits the amount of triangulation you can do), etc. None of them really hold up to any kind of lateral impact on the rear wheel. And by impact I mean something as simple as sliding sideways and hitting a baby head sized rock that's been pulled up by a AWD car higher up in the field. The arms trailing back from the bar to the hubs are just too long and provide too much of a torque moment. I'm not expecting a rear suspension to hold up to slamming into a curb sideways at 50 mph, but I am expecting it to hold up to what I consider average conditions for the course.

Racing, rallying, daily driver, I don't think anyone can argue that the rear axle holds up particularly well to any kind of side impact. 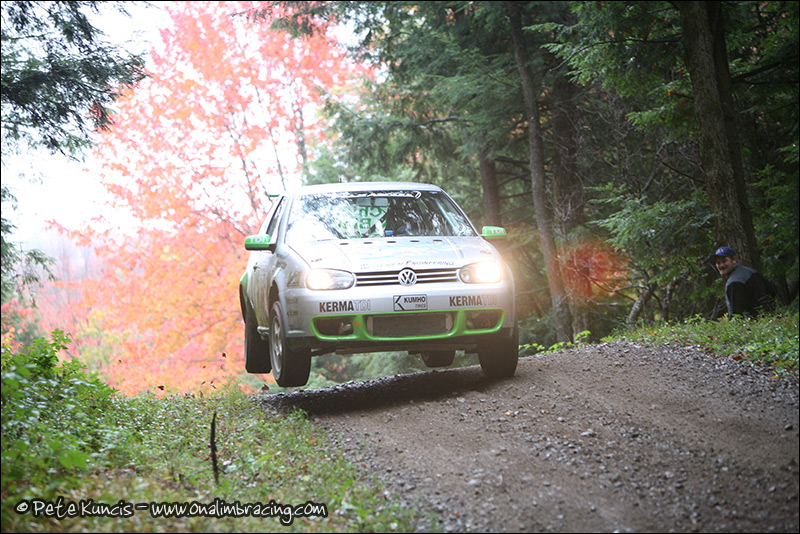 I dealt with the problem for a number of rallies, and started getting tired of having to deal with a crabbing car on stage. For example, the passenger side rear in the above picture is pretty cocked up. It makes the rest of the stages a bit uncomfortable, then ties up your next service swapping out the axle. Talking with one of the service guys for the previous owner, I understand he went through his fair share of axles as well.

The last straw was the fourth time it happened (in as many rallies), during the 2009 Rally of the Tall Pines. Midway through the rally we were a bit wide coming over a ! R4 over crest, I think. Barely even touched a rock on the drivers side with the rear. Definitely not enough to upset the car. However, it bent the axle and as a result it ripped the rear shock top mount out of the chassis. At that point the handling becomes significantly worse than any MacPherson setup you can think of. Had to run like that for > 30 km. Get to service, didn't have a spare axle, so just ended up bolting the top mount back to the wheel well. Head back out. During the next set of stages, we must have hit something else hard enough to do the same thing to the passenger side. Bent the axle and the shock top mount ripped out. Did another 30 km or so and it was just as much fun. Got back to service bolted it up and kept going. We ended up finishing as fastest 2WD, and 11th overall (out of 51 isn't bad at a Canadian National)[1], but we were almost a minute back on 10th place, and I know that some of that was due to trying to keep the car on the road when it really wanted to go sideways.

After that I realized that it doesn't matter how awesome that twist beam is. I can't have it continuously failing on stage like that. In rally (as in most things) it's just better if things don't break while your using them, no matter how cheap or easy they are to fix. The Neon suspension more robust (for rally for sure), a heckofa lot easier to service than the twist beam, and works for the SRT-4 Neon rally guys. Oh, and it has the same bolt pattern as the A4. For rally, the setup has really solved some of the critical weaknesses we experienced with the stock twist beam setup.

Haven't had too much run time on the suspension. We ran it at the 2010 Sandblast, albeit with Monroe Sensatrac struts from Autozone. They didn't even last the whole rally, but we didn't have anything else in time to put on there. From that run I learned that the Neon rear suspension won't kill me. The next event is all tarmac, so that'll be the first real test of how the car as a whole handles and whether we can dial it in appropriately.

[1] http://rallyracingnews.com/cars/tallpines09-results.html
[2] Craftsman hand tools are great, you can get lifetime replacement, and Sears is everywhere! Until one breaks at a service in the middle of the woods. Good luck finding a Sears then.

Growler said:
he is using Prothe parts on that rally car...
Click to expand...

Not sure I understand what the Prothe parts are?

This place, that you link in your blogroll: http://www.hansdieselparts.com/

Prothe is the guy that runs a bunch of shady VW and diesel parts sites, as well as a Miata parts site, selling Chinese parts of very dubious quality.

bhtooefr said:
This place, that you link in your blogroll: http://www.hansdieselparts.com/

Prothe is the guy that runs a bunch of shady VW and diesel parts sites, as well as a Miata parts site, selling Chinese parts of very dubious quality.
Click to expand...

Whoa! That should have been a link to http://tdiparts.com but somehow that hyphen got in there In any event, I've just updated it to http://idparts.com to get it up to date. Thanks!
F

Hoffer said:
Whoa! That should have been a link to http://tdiparts.com but somehow that hyphen got in there In any event, I've just updated it to http://idparts.com to get it up to date. Thanks!
Click to expand...