In order to keep within the forum rules, no single posts for items for sale are allowed outside the Classifieds section. However, like the Quebec section, we can have a FS thread. So:

1) ALL Ontario based for sale posts must be posted in this thread. Please don't start your own.
2) Please don't clutter the thread up with unnecessary comments (PM the seller if you have questions).
3) When responding to a post, please quote the original post so everyone knows which item you are referring to.

I know its not ideal, but better than nothing. Thanks for your understanding.
Last edited: Mar 22, 2015

Thread clean up of anything older than a couple months, or has a dead link.

If I deleted an ad and the items are still for sale, please feel free to repost.

Any chance there's a Canadian looking to get rid of a hitch receiver for Mk4 Golf?
2

$400 will get you a set of alloy rims (Avus style) with Solus tires (plenty of tread)....along with the rest of a 2002 Jetta VR6.
Of course, it's all the way out here on Vancouver Island, so shipping might be a bear.
D

Sold my MK4 and looking to get rid of some parts I have left over. Let me know if you’re interested in anything.

IT IS CURRENTLY IN MY CAR!!
im just seeing if anyone would be interested in buying a vnt 17 pick up or shipped, it is only a couple months old and nothing wrong. i just want to go with something bigger (this is the perfect daily driver reliable power turbo you can get) but i am looking to buy another tdi as my daily because building this thing has been too much fun and i need more time to work on it then weekends. IF INTERESTED PM.

Location
SE of the capital, eh.

2003 Jetta Wagon 5 spd, for parts; body rusty; some parts already removed; let me know what you need. Car is located just outside of Ottawa
hatch is in decent shape but no glass
Thanks
Mike

mikemcc said:
hatch is in decent shape but no glass
Thanks
Mike
Click to expand...

OhCdn said:
IT IS CURRENTLY IN MY CAR!!
im just seeing if anyone would be interested in buying a vnt 17 pick up or shipped, it is only a couple months old and nothing wrong. i just want to go with something bigger (this is the perfect daily driver reliable power turbo you can get) but i am looking to buy another tdi as my daily because building this thing has been too much fun and i need more time to work on it then weekends. IF INTERESTED PM.
Click to expand...

Bunch of stuff off my MKIV for sale below - make an offer!

2000 New Beetle TDI, 215hp, AWD, 6spd manual, ~186000km.
Current asking price is $10995 CAD
Hi everyone,
I've finally made the decision to sell my 2000 New Beetle TDI. This is a very special car: I bought it when I was engaged as my last chance at a project car, and as a University of Waterloo Mechanical Engineering student it gave me a great outlet for my creativity and automotive passion for two years.
Story:
The car came to my life as a 90hp automatic with 160000km on it. I proceeded to do a standard 5 speed manual swap while upgrading the clutch, injectors, turbo and tune to transform this into a MK6 GTI-challenging machine capable of 1000km on a tank. The reverse shaft promptly began to crumble after less than 1 year (my fault, the transmission I put in had 550000km on it already. I was a broke student at the time so I had to take what I could get).
An Audi TT was for sale at a local VW parts place, so I managed to swing a deal and purchase the entire back half of the car including the AWD system. Instead of just replacing my bad transmission, I set to work replacing the entire drivetrain! I picked up a much newer and stronger 02Q TDI transmission with 110000km on it for better gear ratios, modified the case and swapped the front diff for the AWD one, and bolted it all up. I did the rear floor pan swap from the TT, repainted the rear end after sealing all of the welds, then bolted everything up and voila! A simple circuit to power up the haldex pump and I was enjoying an AWD, 215hp diesel Beetle all spring!
I honestly hate to see this car go, and not just because I'm taking a big loss on parts and an even bigger loss on the two hundred hours I've put into this thing - The reason I made the decision to sell is because I've got a baby on the way, and this car, while it will be mechanically sound when selling, will take much more time to maintain than a newer car and I can't have cars taking too much time from the baby.
Work that will have just been done upon selling the car (working on it at the moment)
- New pads (rotors are at ~10000km)
- New head gasket (OEM)
- New timing belt and water pump kit (metal impeller, continental belt)
- New valve stem seals
- ARP head studs (the OEM studs allowing a coolant leak is why I needed to do the head gasket)
- De-tune to roughly 200hp 300tq at the crank to get rid of the diesel smoke and be easier on the engine and the clutch
- New(er) upsized tires. Car is running 225/50 R17 Michelins with roughly 15000km on them
- New key fob
- Touched up paint (there are now no visible rust spots on the vehicle's exterior - undercarriage is quite clean for a 20 year old vehicle)
Features/Mods:
- Genuine Garrett VNT17 turbo
- Custom turbo back exhaust (2.5" from cat back) with stock catalytic converter, brand new Borla muffler
- Race 520 injectors
- 11mm injection pump
- FX Stage 2 clutch, new OEM throwout bearing (now takes Audi TT parts)
- 02Q 2011 Jetta TDI transmission with 110,000km and new trans fluid
- AWD system including driveshafts, bevel box, and haldex (fluid change done 2000km ago) from a 2003 Audi TT
- Drilled rotors to match up with Audi TT calipers
- 17" GTI Wheels - some peeling around the lugs of the clear coat
- Power locks/windows (all working)
- Heated leather seats
- Audi TT 62.5L fuel tank and lift pump (car gets 5.5L/100km average - a typical tank will be just under 1000km)
- OEM VW roof racks
- No Check Engine Lights!
Problems:
- The speed sensor is arduino-based since the 02Q transmission does not have a proper speed sensor. Not actually a problem, just an awareness item. It will be GPS-calibrated and I can include the sketch file so that you can calibrate for different tire sizes (i.e. if you wanted to lift it and put big 30" tires on) if you want.
- The clutch is rated for 330ft-lb but the car was technically running about 350 ft-lb for maybe 500km on that clutch. It will be de-tuned soon anyway, so I don't think any harm is done here.
- The A/C just stopped working. It has a low-mileage used compressor and a brand new OEM pulley/fan clutch/solenoid on it, and the fan control module has caused problems not activating the AC before so I suspect that's where the problem is.
Link to pictures (will be adding to this over the next couple of weeks - The pictures in here now are currently not great.)
https://drive.google.com/drive/folders/1WWOYjuQxkAcuKaKp1DC71g5GKsMeY6XU?usp=sharing
G

Full set of cloth mk 5 seats in excellent condition with heated seat capability asking 350$
Location: oshawa
Apologies tried to link photos but kept getting errors if interested i can dm them
B

MK4 Jetta glass headlight lenses - some of you might remember my thread from back in the day, sorry for the delay on anyone who may have PM'd me and not got a reply...

Still have 5 sets, still selling for $100 a set. The ones on my car still look great (definitely one of the better looking things on the car), been on for 9 years. I used a thick protective film which has really worked well at preventing stone chips, sandblasting, etc.

I'm in Kitchener/Waterloo near Grand River Hospital. Text is better (fifty one niner, four zero four, thirty five fourteen), or you can PM here which might take a bit more time to reply to.
S

I have two sets of rims for a mkiv, one steel and one aluminum avus, both have tires on them with 3 of the 4 tires usable. The one set on steelies has some 3 nice meaty winters.. want them out of my shed $50 a set. In beaverton, if youre serious about needing them msg me and ill send you pics or here https://www.facebook.com/marketplace/item/411368116197547/

Hi all, after selling back my Golf Mk6 Sportwagen TDI last year, I realize now I have a few parts that I bought using the $500 gift card that you had to use at the dealership, prior to selling back, that I never ended up putting on the car. I am looking to sell these parts now.

They are:
Picture of parts: 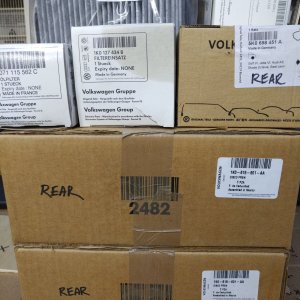 The parts are in Ottawa. I am looking for $200 for the rotors and pads together, and $80 for all the filters together. Please reach out via PM if you are interested. I am open to offers, so let me know, and also open to someone taking all parts at a lower price in one go.

I also have a full set of Mk7 standard titan cloth seats (replaced with GTI seats), if anyone wants.

Made in Sweden. Excellent quality.

2 Available. New in the box from the dealer. Complete kit with hoses, clamps, bracket, heater and instructions.

I have 4 wheels like these, have the original michellin mxv4 tires on them, which are no longer considered safe due to age. They are 16's 100x5 bolt pattern. If anyone wants them ley me know. I'm going to toss them tuesday if no one wants them. I'm in brooklin. (I took this pic off of kijiji, too much of a pain to resize).

I have 4 wheels like these, have the original michellin mxv4 tires on them, which are no longer considered safe due to age. They are 16's 100x5 bolt pattern. If anyone wants them ley me know. I'm going to toss them tuesday if no one wants them. I'm in brooklin. (I took this pic off of kijiji, too much of a pain to resize).
Click to expand...

A member is looking for these:

Anybody have a set of Le Castellet wheels (in decent shape) they'd part with?

Having trouble finding these for my wagon. Would take them with rubber or without. Thanks!