No power to fuses above f29 in hood fuse panel

Backstory: I was updating my Nav unit in my 2013 TDI B7 and forgot to turn the ignition off draining my battery. This put a final nail in the battery without my knowledge. It wasn’t getting a full charge even though the battery charger said it was.

The issue came to my attention when I discovered my info display wasn’t coming on and my push start did nothing. I went through my driver side fuse panel and discovered a blown fuse at F13. I have a power inverter in my car that might have drawn too much so I unplugged it. I replaced the fuse and the display came back up.

I was able to start it once with a booster and started to take it for a drive to recharge the battery. Had all kinds of indicator lights on which isn’t unusual after the battery is disconnected. I cut the trip very short when it gave me oil level warnings (oil level turned out to be fine). When I got back the house the push on/off wouldn’t shut off the engine but it would everything else. I pulled the F13 fuse and the engine shutdown. I put the car back on the charger and tried to start it again. I heard a lot of clicking from one of the relays under the dash. After a few minutes of this happening and being unsuccessful I decided to check the actual battery voltage. It was in the low 11v. Determining a little late my issues were due to under voltage I replaced a 3 year old battery with a new one.

Unfortunately, after swapping out the battery I have no power to the info display or on/off switch. I went through all of the fuses again and none were bad. I read a thread with someone having a power issue on a different system and it was suggested to check the voltage on the fuse terminal itself. I did that and discovered I had no voltage on any of the driver side panel fuses. I went to the under hood fuse panel and I have voltage up to 29 but nothing higher. I have voltage on the four front lugs. I’m out of ideas where to look. I also checked the relays and they are cycling when power is applied (have a soldering station that allows me to output variable dc voltage), I get continuity when engaged but curiously I don’t get a voltage reading.

I like a challenge but this is above my skill level.

Thank you in advance if anyone can point me in a direction to troubleshoot further. 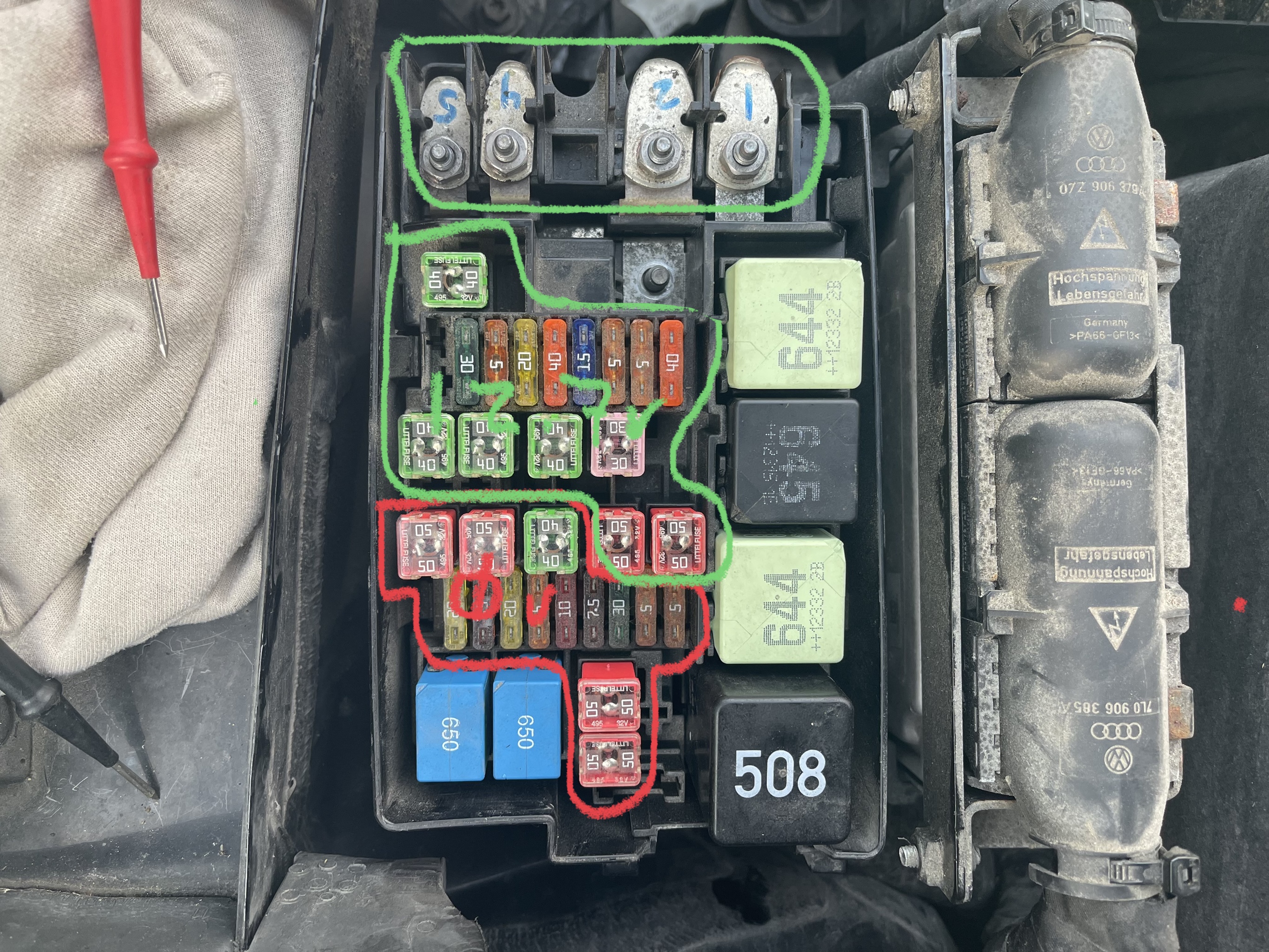 Correct. I wasn’t changing out the unit.
0

Any chance you jumped it backwards or put the battery in backwards? I would check the main fuse. 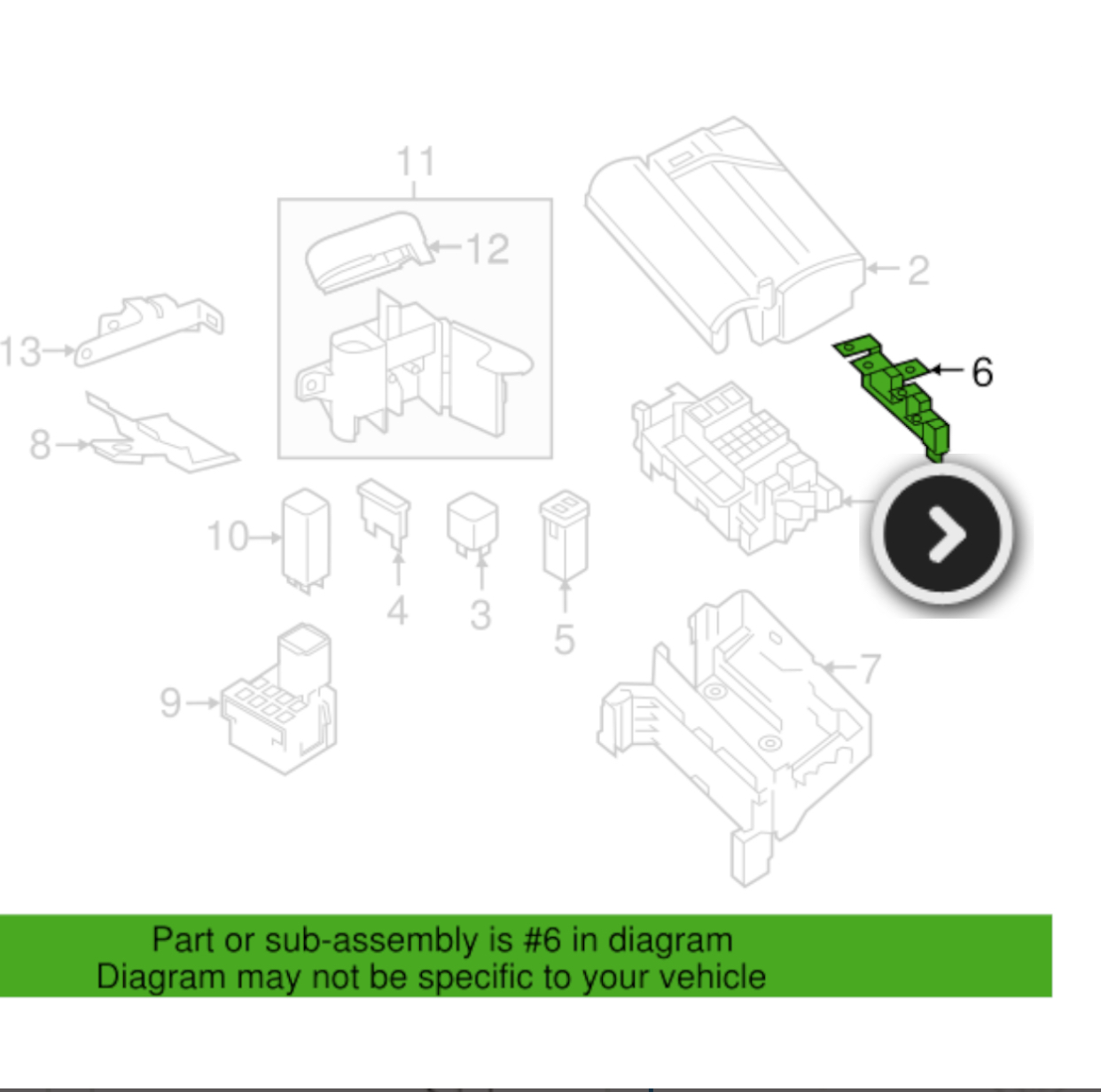 06bluebeetletdi, thank you for the reply. No that wasn’t it, Unfortunately I already pulled and checked that. I‘m getting continuity through each fuse. There are three on mine. I’m waiting for VW to get me the day pass access for the diagrams and manuals I paid for. I’ve read some threads though they aren’t very responsive - if at all. I need the wiring diagrams specific to my car to be able to follow the power backwards from where it isn’t. Nothing I’ve found online even matches my model. The B7 Passat TDI SEL seems to have changed around a lot of things from other models. Probably just because they can. Thanks again for the idea. I also had an idea this week while out of town to check for power at the power relay in the cabin. If I have power there I can then try and follow it up stream to where it stops. I does seem weird though power would run into the cabin fuse panel and relays then back out to the back half of the engine fuse panel. That doesn’t make technical sense From an engineering point of view - at least until I know what those fuses are really connected to. Like I said haven’t found a fuse diagram that exactly matches what mine looks like. I’m partially guessing hoping VW used some commonality in their design process to make production cheaper.
Last edited: Jul 12, 2021
0

Slightly different topic: i have a 13 beetle tdi that I decided to add fog lights and used vw’s retrofit harness, the diagram didn’t match my car exactly and looking at wiring diagrams to find out what a missing fuse was controlling led me to a power draw. I have never found a fuse diagram to match my beetle, just beware that you may not find an exact match. Best of luck
S

That will suck but would be about right for the same reason it isn’t in the manual.
W

I would try starting at the source and install another battery.
S

Changing the battery helps put the last nail in the problem because people sell batteries that aren’t charged - bit of a problem if you need to put it in where you bought it. It’s my fault though for not checking. I did get access to VW Literature and pulled all of the manuals and diagrams for my Passat. Immediately I found a direction to go. I’ll check it this afternoon when I get back from some errands. It looks like that f13 fuse connects back to the ”F” panekl in the trunk. There is another set of fuses like the ones on the front of the B panel. I’ll check and test them. There is a strong connection between the fuses that have no power all connecting back to the F panel. I’ll post back when I know more.
S

There is no F panel in my trunk so that may present a troubleshooting problem.
0

Trunk panel would be on a v6 where the battery is in the trunk.
S

So I’m back at this with some updates and no final solution. I somewhat know the problem but not the next step. I went through the wiring schematics to trace my power flow.

I‘ve pulled all of my relays and tested them, I’ve also checked all of my fuses again. They are all good. I decided to test power and continuity on the relay sockets. While doing that I inadvertently jumpered the 506 relay socket which activated power to my dash and ignition system. Strangely enough it also closed a relay that was open somewhere because it restored power to 90% of my fuses and remains that way (only the 2,3,4,5 are dead). My main issue seems to now be at my 506 Relay. I went ahead and scoured over 30 Passats at a salvage yard to get another 506 relay. It took that many because after looking and not seeing the relay or half the time the relay carrier, I call the parts department at VW. I was aggravated because VW part site says it’s used on 2012 and up Passats but I wasn’t finding any. The parts guy gave me the clue it is only on ones with remote start. I finally found the relay on a 2018 with remote start.

I got back home put the relay in and nothing. I needed to get my car moved from where it was for the past two months so I jumpered the 506 socket with the relay in it and decided to try and start the car. Started just fine. Stayed running after I removed the jumper - the power usually drops as soon as the jumper is removed when not running. I even took it for a test drive and it drove normal with no issues. I got back and shut it off. Just for curios sake I pushed the button to start it again and nothing.

Still no power to the MFI or Push button start. I tested the relay socket again realizing the power I found was on the relay output circuit side. I test for power on the actual relay input and found no voltage. Back to the schematics. Power to that relay supposedly comes through the 519 BCM module. I don’t really have a way to test that so I went back to the salvage yard and got one of those from the same 2018. Swapped it out and still nothing.

Here is the last curious fact. I put the original BCM back in because it had my key programming stored and they didn’t work with the 2018 BCM. For ****s and grins I tried my remote start because that relay is only on Passats with remote start. The car started and shut off after about 2 seconds. I tried it twice same result. I happened to be standing at the car when I did it and noticed the MFI was showing the normal press brake to start screen. I decided to see what would happen if I did. so I got in the car and went through the remote start process and as soon as I had the option I hit the brake, pushed the start button, and it fired right up. So at least I have a work around for the moment.

Final two comments on what I know. I should not be able to activate remote start from inside the car. Remote start requires hitting the lock button on the fob. Normally it won’t let you lock the doors with the fob inside the car. I consider that an issue that may correct itself and kill my work around at some point. Also, using the work around I found that after shutting off the car I could immediately restart it without going through the process again.…..until you open the door. This tells me the work around is getting power from the same source that keeps the radio on until you open the doors. Which should be accessory power.

So why don’t I have constant power? BTW the radio has constant power but not the clock since it’s tied to the MFI. Why doesn’t relay 506 have power on the relay side even with a different BCM? Would the car otherwise run normal if there was a problem with the ECM? I would think if there was something wrong with the ECM controlling that relay the Work around wouldn’t work. I’m pulling my battery and tray in a bit to make sure I didn’t pinch a wire somewhere in the main harness the last time I serviced the transmission. Next step will be to remove the security screws on the ECM so I can pull the wiring plug and check the pins and connectors. I’m really hoping someone knows of another fuse or relay somewhere off the schematic path I haven’t checked.
0

Just a thought - your using a bcm from a 2018 which would be a gasoline only car, whereas the tdi bcm will have a delay built-in for the remote start on the glow plug. I’m fairly certain the bcm needs to be programmed to the car, it’s not a plug and play
S

There was a TDI there missing an engine from a collision. I’ll have to check the model year when I go back to see if it’s compatible. I don’t have a VCDS at the moment.

That is the 506 relay from the relay diagram
S

I should probably also mention the primary issue is that when I open the door the MFI doesn’t come on which is also tied to the push start system.
S