So the Soundaktor on mine is JUST power and ground, which makes physical switch control on mine easy, but prevents any sort of customizability. The CAN Gateway on mine is 5Q0907530.

Right now I'm working on cross flashing my MIB2's firmware from 0253 to 0478, removing the CID lock and updating maps. Tomorrow's project to finish up as it takes four separate firmware flashes to do it without bricking.
C

Are you certain you're looking at the soundaktor module and not the speaker? The speaker should just be two wires. The soundaktor sound is RPM based so that has to come from somewhere... On the Mk7 that is drivetrain can. Driving mode is also provided via that bus to tell the module which sound table to use. My assumption is this is the same/similar on PQ.

I wasn't completely clear before. The module connector is six pins... 4 inputs as mentioned (power ground drivetrain can high/lo) and 2 outputs (power and ground, to the speaker).

Ill do some digging!

Today, I was successful in my quest to have everything I own always running the latest driver, firmware, or software. 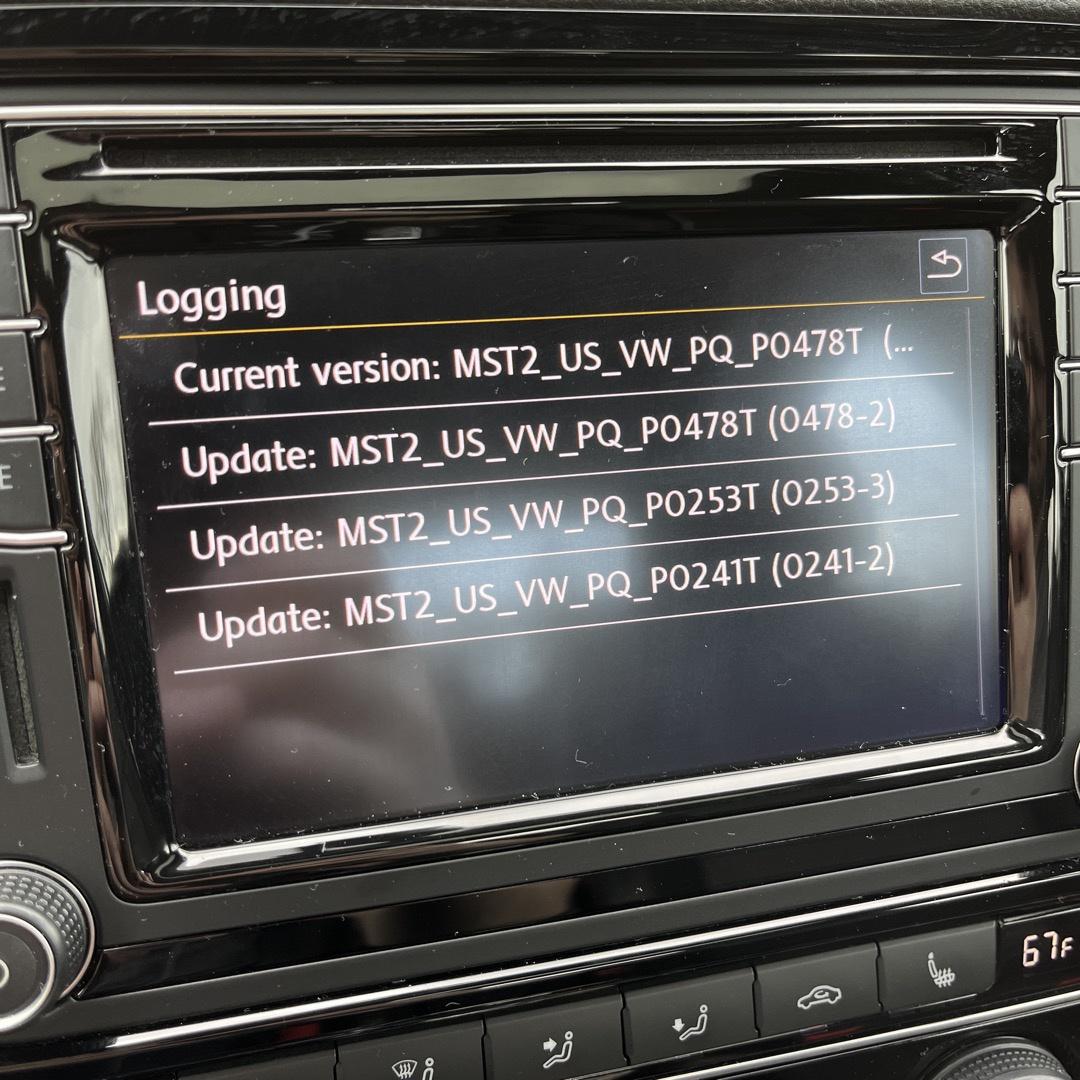 I missed this somehow. I would like to update my MIB to the latest version, whatever that is. But having had so many issues with my APG MIB 2.5 I'm afraid to mess with the one I have in there now (bought from the dealer, everything done properly, including lifetime map FEC, no faults). It has the occasional (like twice a month) glitch where bluetooth audio doesn't play although it says it's playing. I switch to any other source then back to bluetooth and all is well, no need to reboot or anything inconvenient like that.

So the Golf R is the only Mk7 Golf that got the EPB in the states. Mk7 Golfs in Europe are all equipped with EPB. Due to some regulation early Golf R's do not have an opening/ratcheting/sliding arm rest (although the cubby is underneath). VW decided against coming up with something specific for the (early) US Golf R's and installed a non-ratcheting/sliding mechanism which was locked. The console I bought is from an early Golf R so I needed this.
Arteon/Passat Cupholder Assembly, illuminated 3G0 862 531 G
- This will be part of my RGB lighting mods, speaking of which I am retrofitting a facelift BCM
- Copying this from Drive2... https://www.drive2.ru/l/594167288630902422/ (use translate)
- I already have the RGB LED's mentioned in this article, from before these plans
Right Caliper (with Motor) 5Q0 615 405 xx (the xx is for different colors/unpainted)
Left Caliper (with Motor) 5Q0 615 406 xx (the xx is for different colors/unpainted)
- You can buy the caliper and motor separately, for lots of money
- The bracket is separate, and is the only thing that differs between 272/310mm setups
- I have brackets for 310mm rear brakes on my car already so not replacing them as my rotors are new


And just how am I justifying this you ask? Several ways, in my mind...

Be sure to let us know how much time you spent considering doing a DPF delete while you're trying to get at the ABS pump / module. So much fun.

You will need ODIS-E (offline) and a VAS5054 to flash it. I did try it, and it's pretty nice. The sound profile was originally intended for an engine that revs to 8k so it's running off that table. Very subtle until 3k (have to be listening for it, and radio pretty quiet) and then comes on nicely above 3k.

I’m dreaming now…I don’t think it’s possible on a non-MQB, but I’d love to have D = off and S = on for the sound Soundaktor.
C

Ahhhh, yeah that github is for the MQB soundaktor only. Even on MQB I'm not sure what you want could be achieved... driving profile retrofit gets you that type of control.

My windshield succumbed to a rock in one of the 11ty construction zones on I-91 this past week.

After calling a few of my trusted mechanics and body shops, then looking at reviews, I decided to go with East Coast Auto Glass. I cannot recommend Paul enough if you're near CT. European cars are a majority of his business and he knows his way around them, e.g., the Soundaktor.

He was happy to order the best glass he could source for my car: Pilkington with the acoustic layer originally meant for the Jetta Hybrid. It's so much more clear and quieter than the OEM Vitro.

On the flip side, it's so much thicker/quieter than the stock glass I can barely hear the Soundaktor now .
C

Nice... there were more than a few moments that I considered ordering the electrically heated front windshield for my Golf. In the end I just wanted the front camera mount and I would honestly never use a heated windshield.

How is the soundaktor mounted in that car? On the Golf it's mounted here (lazy link but has pictures). The full name is Structure Borne Sound Actuator or something like that. The sound comes more from the "engine area" than from the windshield, if that makes sense. I'm not sure a thicker windshield would do much to impact the sound.

The GTI/R folks often complained of it rattling the dash. Mine does no such thing, granted I'm not running the same sound files as they are.

Very similar to that diagram, mine is mounted to the windshield shelf with a bracket. The control unit (5C6 907 159 A) is mounted opposite to the wiper motor under the cowl.

I made sure everything was still connected and vibrating, it is. It’s just much more muted from the thicker glass. It actually sounds more like the TDI now.
C

That's interesting. Maybe more sound is coming "through" the window than I thought. I suppose the windshield could be acting as an uncomplicated diaphragm not unlike some new aviation products... https://bongioviacoustics.com/aviation/. Your new glass would be worse at transmitting the sound I suppose, fancy acoustic layer and what not, haha.

I have RS4 firmware installed on my soundaktor, so the sound isn't diesel like... but it IS awesome, haha. It makes me want to rev the car out. Plus I can turn it off with driving profile selection so the loudness is only when I want it.
Last edited: May 13, 2022
You must log in or register to reply here.
Share:
Facebook Twitter Reddit Pinterest Tumblr WhatsApp Email Link
Top