Purchased a 2003 jetta tdi with 308k that is rust free with decent interior knowing of mechanical issues for a little bit of nothing. After test driving the car I noticed a pretty bad misfire that was erratic. After popping hood I noticed deisel fuel around injector on cylinder 4 and air bubbles. Thinking an easy fix and since the car came with a spare set of injectors that the owner said were removed from a low mileage car of the same year, I jumped on it.
So here I am. New to this forum but not new to diesels as I own 2 duramax's, one of which I've worked in more than I care to talk about.
Driving the car home I had to deal with the intermittent misfires and blueish white smoke and a leaking flex pipe which after about an hour about killed me. I swapped the injectors the day after and fired the car up. It missed from the get go and was putting out plumes of white/blue smoke.vtried to drive the car and was near undrinkable. No power, stumbling and missing. Here is what I have done.

Checked compression
All 4 cylinders around 400 psi +-10 psi
Pulled lower intercooler hose. Oil present but not significant as stated in other posts I have read.

Original injectors dropped at local Bosch specialist, tested and deemed they no longer automize fuel and are leaking.

Pulled valve cover everything appears to be in pretty good shape.

How much oil is to much oil to indicate turbo failure? To me, there should be now oil at all. But I read on here that some is normal. Never heard of such a thing.

Where to head to next? I know I need to get injectors taken care of but would that alone be causing all these symptoms?

I do not have vcds and purchasing would be more than i paid for the car. No codes currently on car. Traction control light is illuminated however. 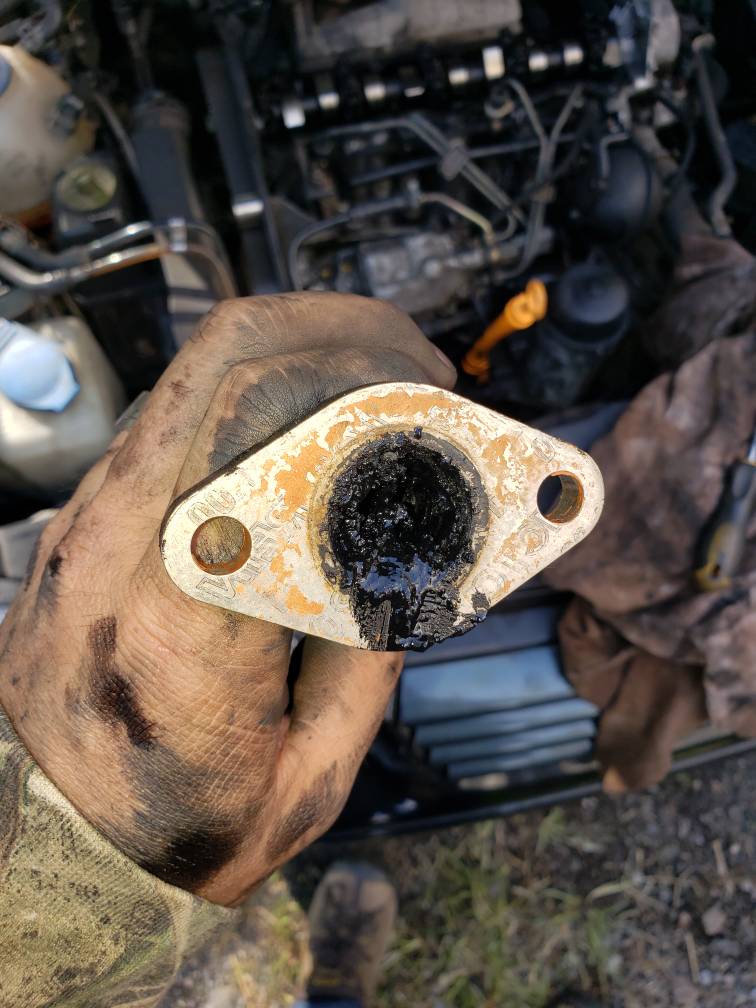 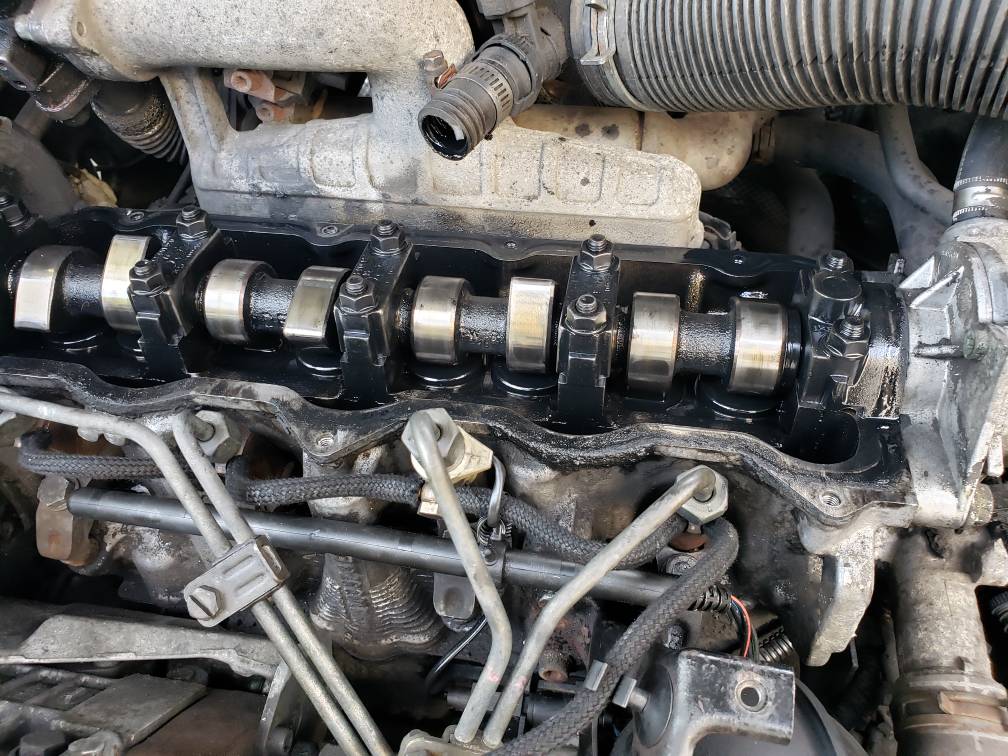 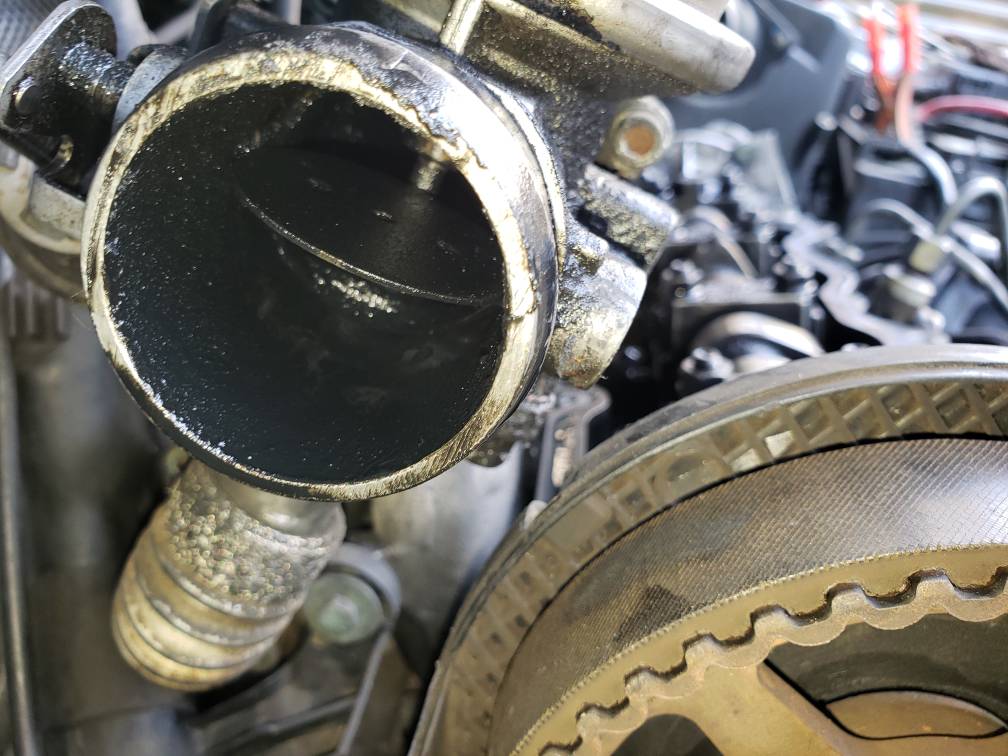 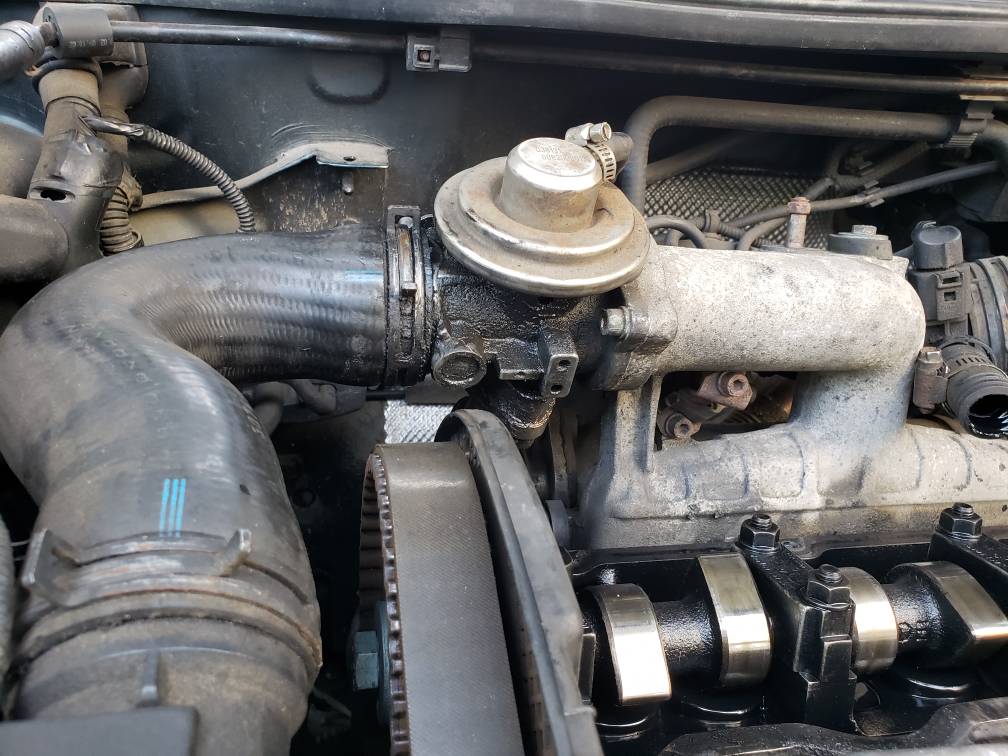 If you don’t want to buy VCDS, find someone with it. How did the intake look. Have someone fire the car and check to see if the actuator pulls the lever against the stop
T

Oil in the intake is normal because of the PCV. Take off the EGR valve and look for clogging of the intake manifold, some try to clean just the EGR valve and leave the intake plugged just before selling. Turn the motor over until the injection pump alignment hole is close to TDC, it should line up with the top of the IP, then continue to turn the motor over and watch for the TDC mark to line up on the flywheel. The TDC mark on the flywheel and the pump alignment hole should be very close to being the same, if not, your timing belt may have jumped a tooth on the crank pulley. Turbo should turn freely, but check the other areas first and replace the PCV valve. A none working PCV can cause excessive pressure in the crankcase causing the turbo to blow a seal. Excess oil in the intake will collect at the bottom of the inter cooler and should be drained or checked for maybe once a year before it is pulled into the motor in large quantities. Small amounts going through the motor are not a problem.

I will have to ask around to find someone with vcds.
I currently have the intake egr and turbo out of the car. It amazes me how easy these things are to work on. My plans are to clean everything and order new gaskets and reassemble. The stiffness in the turbo is bothering me. Maybe I'm just paranoid about it.
Once I get everything back together and get injectors figured out I need to check the IP timing. I was planning on doing TB anyhow. Probably wont have any results until next weekend.

Since you have the turbo off, I would suggest separating the cartridge from the manifold and cleaning and inspecting the nozzle assembly for wear. Any and all contact points. You can purchase new assemblies. Also see if you have rust in the diaphragm, there is a weep hole, you can tap it on the bench to see if any crud comes out of it
D

I broke the pcv valve removing it so I will have to replace it.

I pulled the carriage today out of the turbo to inspect and clean it. Everything was pretty clean carbon wise. I saw no evidence of of contact in the turbo housing. I was able to flush the oil feed and free up the turbo wheel. It now spins freely but I did notice some side to side play in the shaft. Not enough to make contact with the housing however. I'm assuming flushing the oil may have removed the oil cushioning in the bearings allowing the shaft to have some play.

I also cleaned the intake and egr the egr cooler was pretty clogged up but intake was mostly clean.

It appears that someone had cleaned all of this up not long ago but re-used all gaskets as they are all covered in red rtv.

Update,
Replaced timing belt today as per instructions. Old belt looked really good but timing seemed of flywheel mark was about 1/4 to 3/8 inch off when cam was locked. Injection pump was off too. Replaced everything got everything lined back up and back together. Turned over engine by hand and "thump" abrupt stop about 3/4 through first turn. So turn back to return to TDC and I cant. Turns so far and stops.

What did i do?

Are you sure you’re on #1 compression when you took it apart?
D

The only thing I can think of is to start over. This comment may be irrelevant, but the photo of the cam doesn’t look like it is on #1 compression. Photo unrelated to TB job?
D

Photo unrelated. I pulled the cam. Still cannot get motor back to tdc. Guess the head has to come off

Head pulled. Tons of carbon build up in the cylinder. Looks as if a piece of carbon dislodged and was smashing against a valve on cylinder 3. Motor turns freely with head off. So new head gasket and bolts on order reassembly next week

Are you going to clean your ports while the head is off?
D

I'm cleaning everything while head is off. With as much carbon there is it all needs cleaned

Was the carbon buildup typical, or more to certain cylinders?
D

Was even all the way across. Hades a ring of carbon 1/2" wide and a 1/8" thick built up on basically the head gasket extending into the cynlinder

That’s a good sign. N75’s tend to fail slowly sometimes, and actuators tend to rust internally fouling the N75. May want scrutinize those two, good investments at this point. Something choked it, if you ruled out everything in the vnt mechanism, they’re both likely culprits. Welcome to the rabbit hole!
D

Head all cleaned up. All injectors were failing one was not closing at all. Got them all back from rebuild. Head bolts and gaskets on the way. Also ordered n75 and the actuator was cleaned. Little to no rust. This car is clean rust wise. So once I get that I'll be throwing it back together. Fingers crossed I get it all right lol.

Any one have a link to torque specs? I'm sure there is a sticky here i can search for. 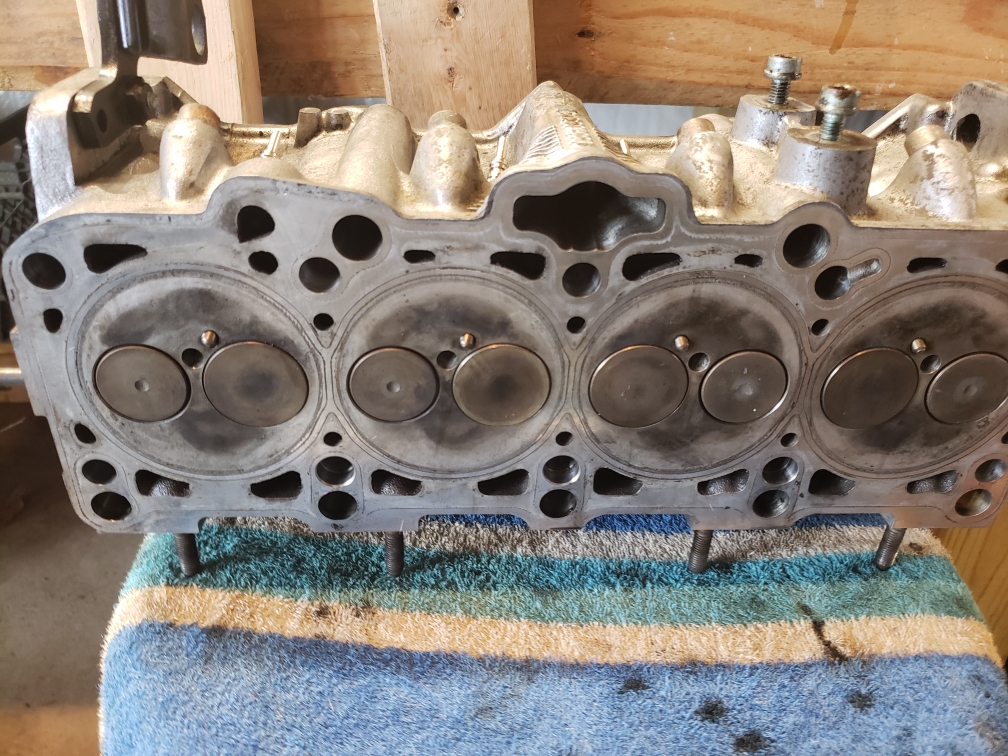 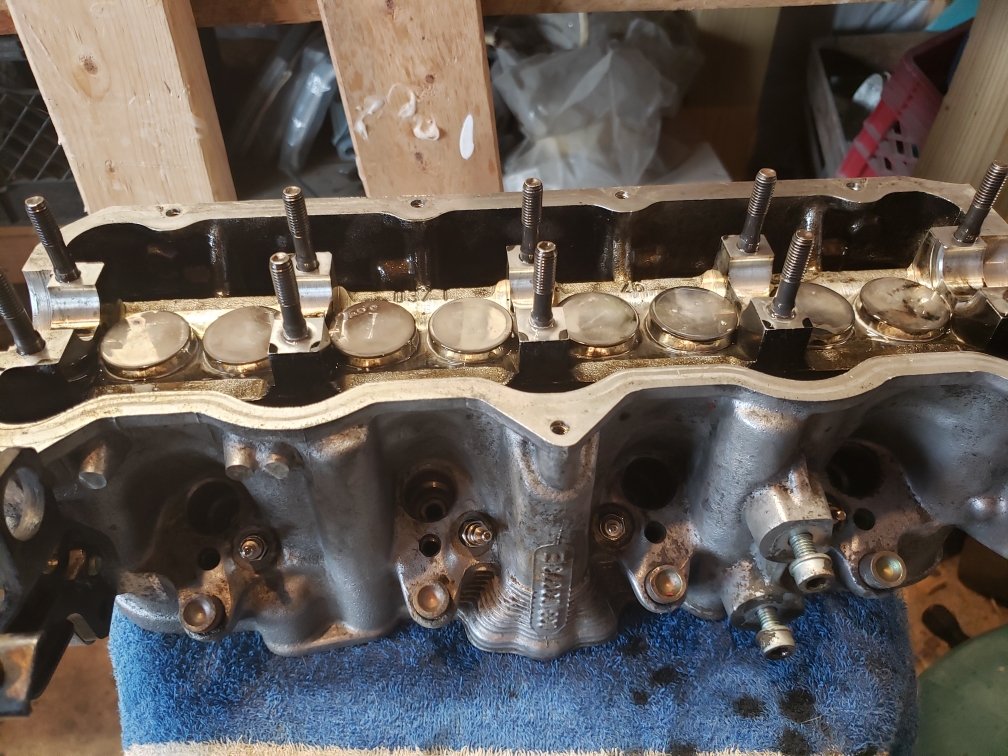 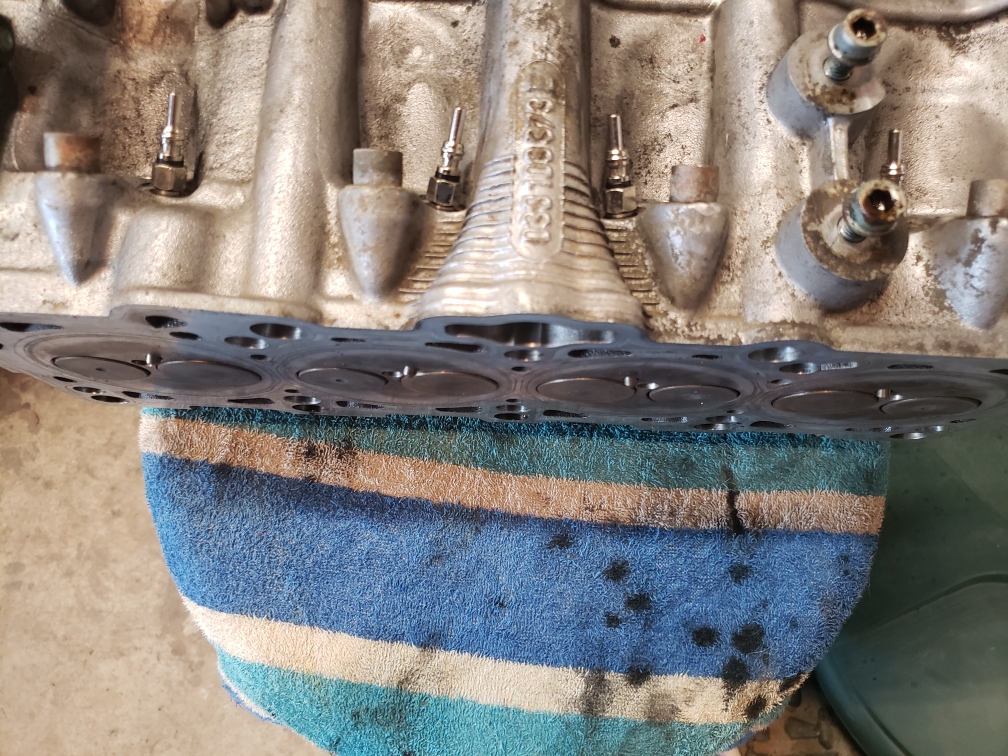 So here we are reassembly day. Here it is before anything torqued down. Somebody scream if I got it wrong before I torque it down 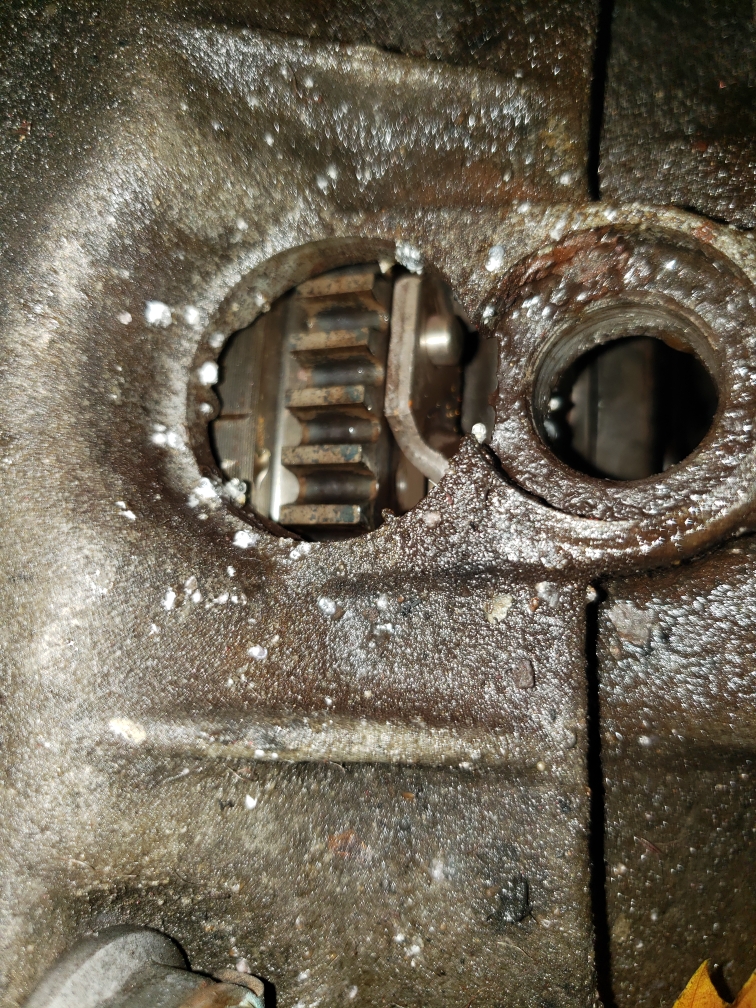 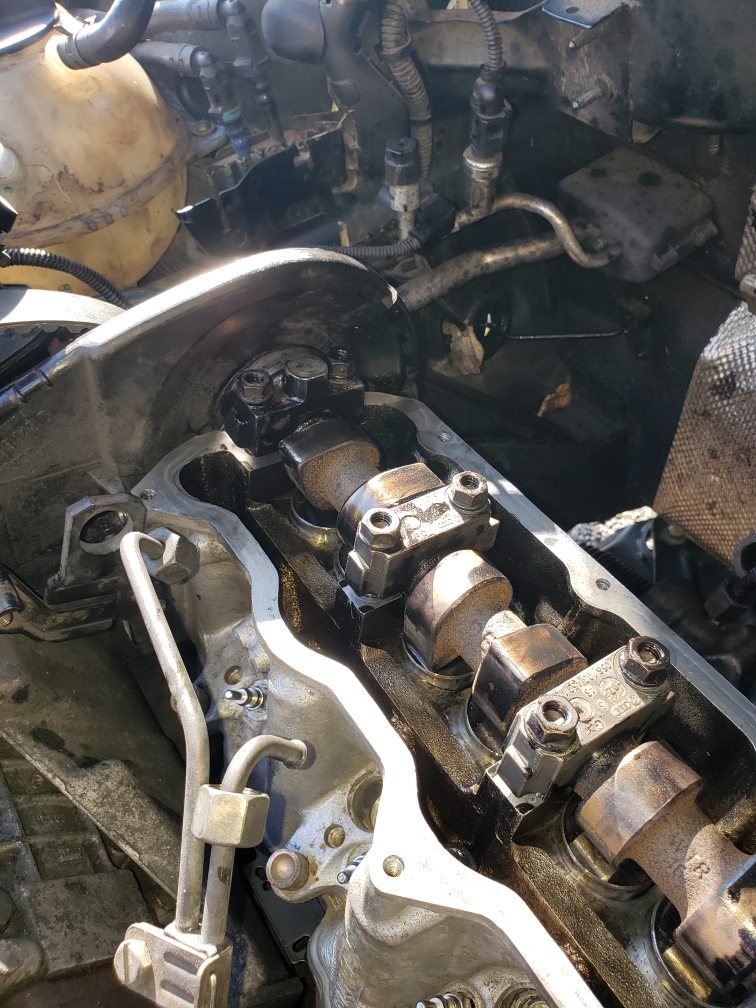 So back together. New rebuilt injectors installed everything primed finally got it started. Smoked like crazy cold but cleared up mostly once warm. Idles like a champ..... the bad....
You go to give it any juice is misses and smokes like crazy. I did however pull 2 codes
P0102 mass air flow
P0252 injunction pump something or another
Drove mile down the road after idleing for 30 min and sucked fuel line dry from fuel filter.

What did you ever find here? Did your filter go dry also?
D

I gave not fooled with it yet. Waiting on a used injection pump to swap in.

For some reason my phone won’t copy a link. Google ALH TDI fuel sender check valve. May not be your problem, but an excellent cold climate mod, drilling out that check valve. Leak in the feed line or at the filter is a possibility also. But you could plug the fuel line while the sender is out and hook a vacuum pump to the other end under the hood to check for a leak.
D

I will check it out. Thanks! I did run the car on an auxiliary tank connected to the IP with an inline filter and it still ran terrible at anything more than idle. I also noticed the IP clicks very loud when turning motor by hand. After some research and with the code present ive found that these are tell tale signs of a failing pump.

Problem solved. New injection pump and new vacuum pump and car runs like a champ. Just need a new coolant temp sensor so glow plugs work right and get someone to to fine tune the timing with vcds.

Had a tiny puff off smoke upon start up and get a puff of smoke when accelerating hard but other than that she runs great.

Thank to all those who helped