I'm leaving for Las Vegas on Thursday the 26th. I don't have to be in Vegas until 8am the 29th so I'm looking for some good camping spots to stay at for my trip out there. On the way back I wouldn't mind doing some mountain biking and camping since I can take my time getting back. Thank you all in advance.
D

How much time will you spend at the camping areas? I have a few in mind...I'm on the app right now, but once I get to a computer I'll look at your route closer.

So depending on how much time you have and how far off I-40 you want to go I'll throw out a couple ideas from east to west.

Its about 20 miles south of Fayetteville, AR. Great campsites, great views, and the Fossil Flats mountain bike trail is a great ride. It's about a 5 mile loop with some cool sections of single track above Lee Creek.

It's about 60 miles southwest of OKC so a bit out of the way, but probably the best state park in OK. Great hiking and mountain bike trails. Semi-primitive camping and back country camping available. Here is a picture I took when I hiked there in Jan. 2016 to give you an idea of the terrain. 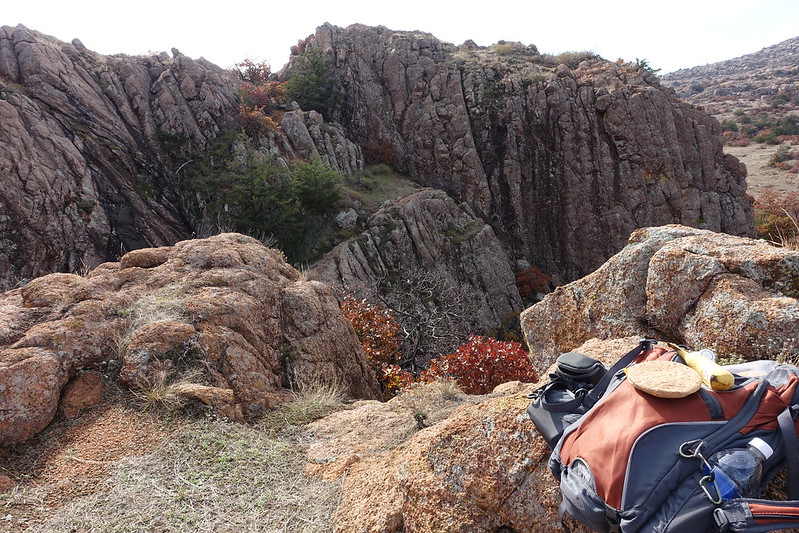 This small park is much closer to I-40 (15-20 miles). It has ~12 miles of mountain bike trails......of the ones I have ridden, the loop to Inspiration Point was the funnest. They also have plenty of tent camping sites as well.

It's about 25 miles south of Amarillo, TX. I haven't been here yet, but it is on my short list as it looks awesome. I think it is the second largest canyon in the US, the Grand Canyon being the first. They have lots of campsites and plenty of hiking trails.


I'm not too familiar with the biking scene in NM and AZ, but I'm sure there is plenty. Santa Fe is a cool place to hang out. The south rim of the Grand Canyon isn't too far out of the way and I hear Lake Mead is a pretty cool place. There is obviously more to do along the route than you could do in a month, but those are a few that I would check out if I were doing the same trip.
Last edited: May 25, 2016

No problem man. Have fun!
J

Steer clear of Kansas. I can't recommend any place to camp.

Though with a futon in the back of a '79 Chevy shorty Van, window delete version can make road trips entertaining regardless of scenery along the way...