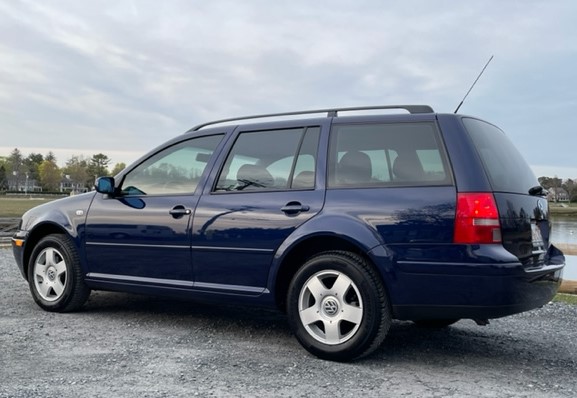 On May 9, 2002, I took delivery of my Jetta Wagon, later named IndigoBlueWagon here. So this month it's 20 years old, and today it passed 450K miles. 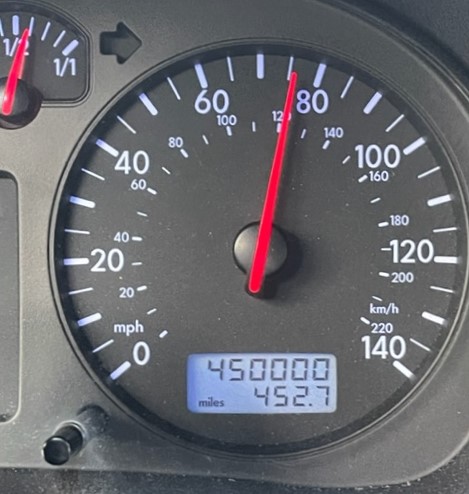 I found this car after a year long search. It was a special order car that took so long to arrive the customer didn't want to take delivery. GL trim, no sunroof, crank windows and manual mirrors. I've since learned that those are all good things. I traded a '96 Audi A4, MSRP was about $19,500, but after discounts and a $500 incentive for accepting 0.9% financing for two years, my price out the door was $18,003. 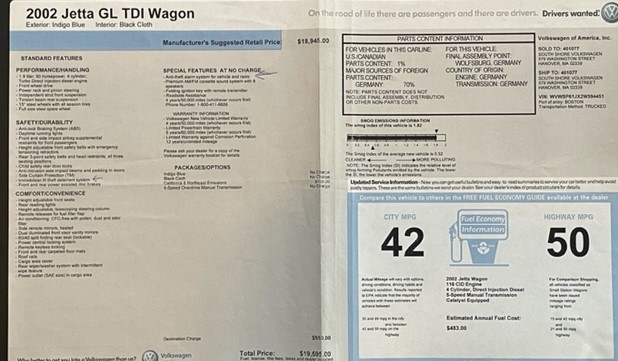 IBW has been my daily driver for the last 20 years, but it's done a lot of other things, too. Snowboard trips with a Thule box on top, college visit and moving in (and out) trips, and a lot of trips to TDIClub gatherings. I've taken it as far west as Montana, south to Florida, north to northern Ontario.

And it's gotten its share of mods. Here's a dyno when it was making its peak power. 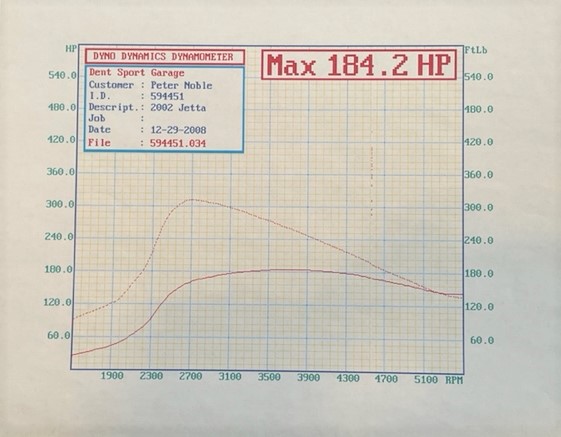 More power meant better suspension, and that lead to track days. Here it is at Calabogie, near Ottawa. 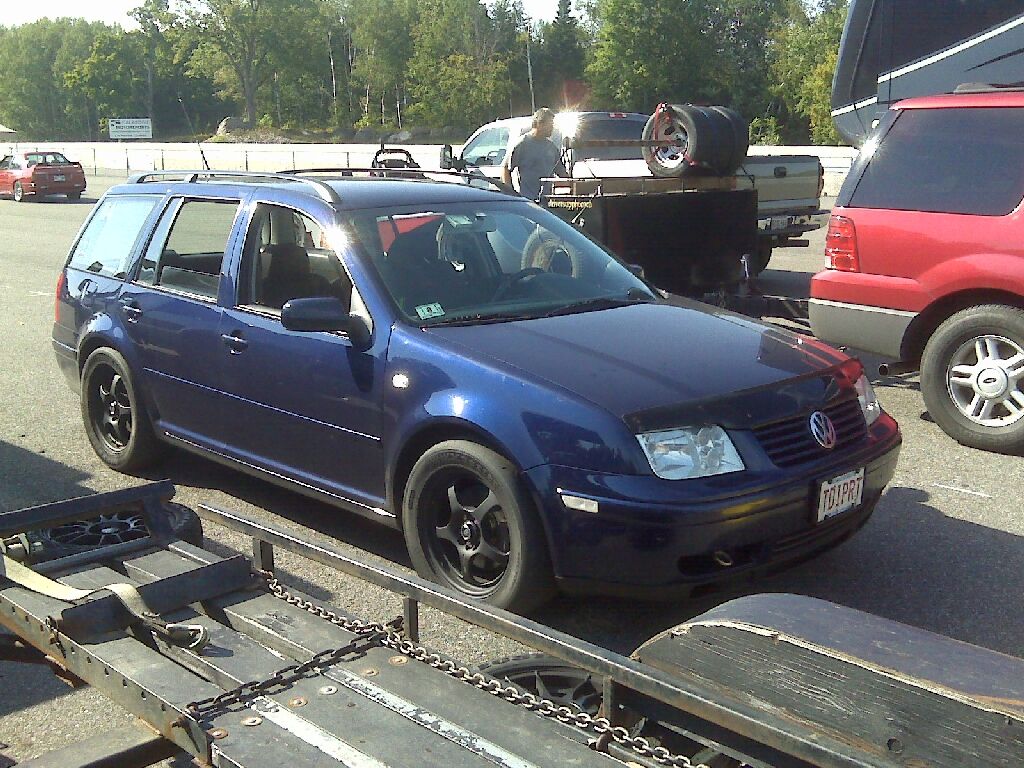 It's received a lot of mods, a lot of parts upgrades and replacements, a new engine at 293K, a new (to it) transmission at 383K. And a couple rounds of rust repair, because its also seen its share of snow and salt. Here it is while visiting my son in Wisconsin in February, 2019, 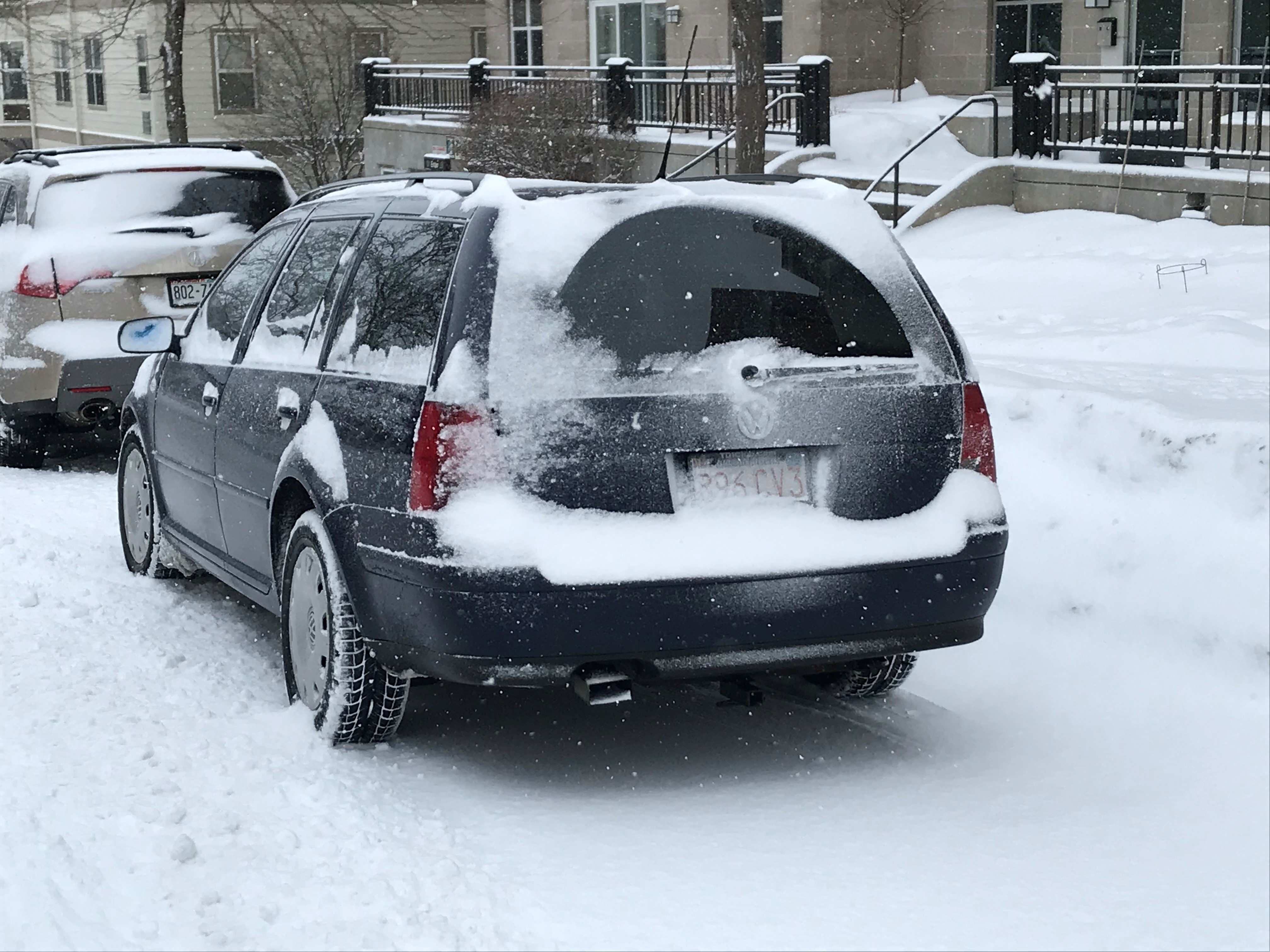 Most important, IBW brought me to TDIClub, which brought me to Ho5G, where I met Dan Simoes, who created TDIParts (as it was named at the time) and Corey Evans (cevans here) with whom I've worked at IDParts since nearly day one. This car has provided me not only with 20 years of reliable and pleasant transportation, but also a career.

What's the story behind the new engine? At 293k it would have been nearly broken in...
I

120K miles of making twice stock power along with a Rocketchip Stage 6 tune that allowed the engine to rev to 6000 RPM took its toll. If you look at the dyno you'll see the hp and torque curves cross at 5250 RPM, which you don't usually see with a diesel. I used that 6000 RPM a lot on the track, as it allowed me to get to 115 MPH in 4th. And I did that with all stock internals. But at 293K miles the rods were bent, the head gasket was starting to leak, and you could wiggle the valve stems in the guides. I could have had the engine rebuilt, but for similar money I got one of the few remaining new factory long blocks. I dialed back to a stock turbo and RC3+, which I'm still running. I love this setup.

Congrats on both milestones!

Always good to see one looking good at that age/miles. I know you've taken great care of it. Thanks for being one of the key contributors on this site and helping make it worth continuing to check in even in what is slowly moving towards a tdi-less world.

Hope for many more enjoyable miles for you and ibw ;-)

Where did your son settle after college?
I

Thanks for the kind words. At IDParts we're continually amazed at how people just keeping buying parts for MKIV TDIs, especially ALHs. These cars seem to keep getting new leases on life driven by outside events: Dieselgate a few years ago, and now spiking fuel prices.


prsa01 said:
Where did your son settle after college?
Click to expand...

Western MA, Northampton currently. He loves that region. However, this weekend he's in Madison, attending his gf's graduation and helping her move east.

Congratulations, such a beautiful car!!
I've always been impressed with you FE numbers and how clean the car is for having winter salt
Last edited: May 15, 2022

Congrats Peter IBW IS a great TDI. The Ho5G is so proud that we were able to lay some ground work for the former TDIparts and now IDparts. You really can not beat the miles and a career and friends.

Its the memories for great Dyno days and GTGs.

Tred turns 22 shortly Several items need to be attended to and be ready to roll on the highways.

Congratulations, IBW! We were hoping to have a similar celebration with Janet's '01 Golf, but she got T-Boned and the car was totaled back in '19. Happy to say, though, that the ALH lives on in one of oilhammer's projects...

Thanks for all you do.
I appreciate your forum contributions and I spend my $$$ at IDParts.

Awesome! What is the build date on your car? 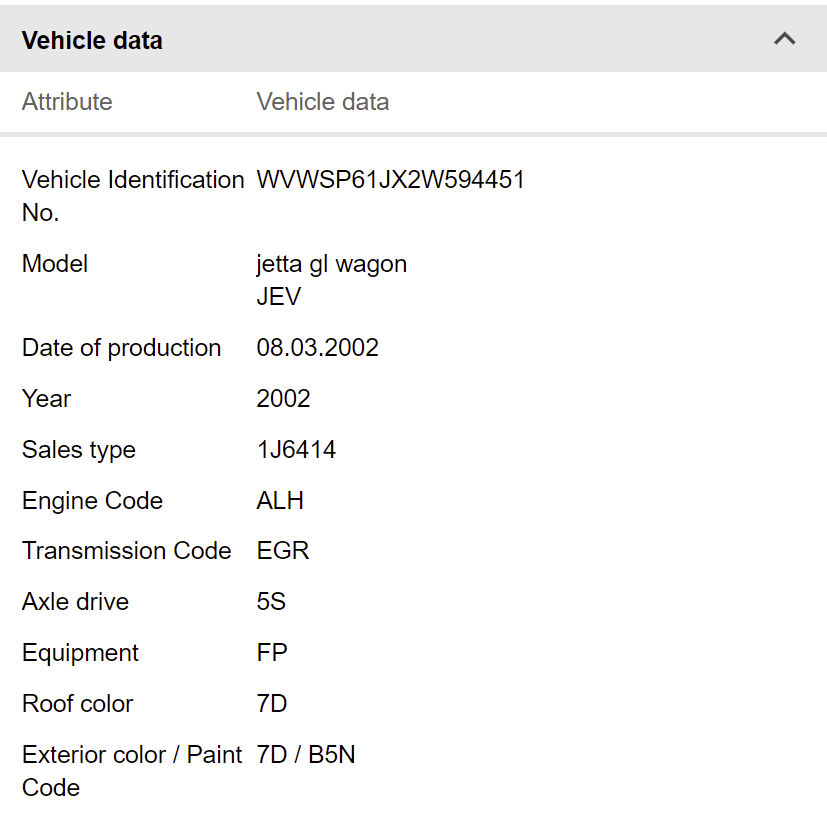 Yours remains the only GL J-wagon I have ever seen with a diesel, and I have only ever seen two that were 2.0Ls. Has to be a pretty rare car here.
I

Yes, March 8. Euro day/month/year date display. So I took delivery almost exactly two months after it was assembled, which is pretty quick to get it here from Germany.

I don't see many '02 TDI wagons of any trim level. And of course I didn't know at the time, but I much prefer the smaller rear bumper on the '02s. And it's the only Wagon I've seen with crank windows. Also because of the manual mirrors the rear window and mirror heater switch is on the dash. I remember having a moment of panic after buying but before taking delivery that it wouldn't have cruise control. As I recall the '02 2.slow Jettas didn't have cruise, but the diesel did.

Yes, all US-TDIs got cruise control as standard, but the base trim Canadian ones didn't (it is easily added with a stalk change and ECU enabling).
S

My 2000 New Beetle is still running strong (381K miles), Only "problems" are an oil leak around the turbocharger, and number 2 glowplug won't come out - it just spins (probably needs a new head). With an RC2 tune and 4 sizes oversized fuel injector nozzles, it's been running great. I can pull 5000 RPM and still going up until I quit. The ABS pump probably needs replacement, but I've gotten by without it for 2 years now.

inspite of the upgrades / problems, I still see 42MPG driving around KC, and it will pull 45-48 MPG on the highway. Scanguage II says I can get 50 MPG on the AVG MPG guage, but that takes some tricks to accomplish.
Last edited: May 17, 2022
T

Saw your car in 2010 on the way to Waterfest in Englishtown, NJ. The taillights threw me off because I had not seen the Euro style taillights at that time. Grabbed my DSLR and took a quick photo. Had no idea this was you until now, congrats on the milestone! 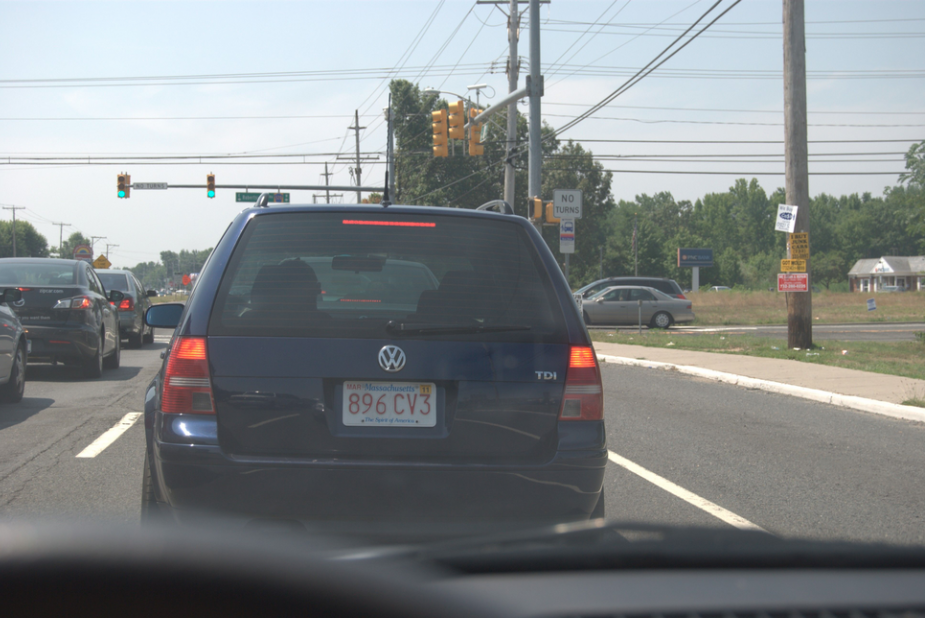 Wow. Great shot. That was pre-rust repair. I never put the badges back on after VW replaced the tailgate.

I broke one of those taillights and went back to stock for a while. Then I realized last year that through some sequence of events I had a pair again, and put them back on. I really like the amber turn signals.

Congrats on 20! I used to own its 2003 GLS twin. Rust was coming for the fenders and rocker panels and my commute dropped so I decided to let it go in favor of a 2012 GTI. Drove that for a year and now have a 2014 JSW TDI. Its been great for me. Nice balance of modern features, reliability, economy, comfort, can haul a lot of stuff, and just enough fun to drive (with the 6MT and a tune).

But my 2003 was probably my favorite car ever. Lots of fun to toss around and 50 mpg all day every day. Plus a sharp looking little wagon. Glad to see IBW still going strong.
D

Congrats and great to see this car still on the road.

When I was in college (Tufts U near Boston circa '07-09) I got out to try to absorb info a few of the club events near Providence and at Ho5G. I was driving a beater '81 Rabbit diesel at the time and wanted to learn about TDIs. The ALH and PD cars were shiny late-model vehicles back then, rather than the old beaters most of them are now -- hard to imagine. And there were also lots of A3 and B4 cars at those events then, even in New England. Even harder to imagine today when those are all but extinct even in areas that didn't get salt.

Anyway, at one of those events I got to take a ride around the block in this exact blue wagon from Peter, think it was the first time I'd been in a chipped TDI car and understood what was possible. It was enough of an impression that I still remember it today.

IBW has given a lot of people tune test rides and drives. Back in '04 when I Jeff switched me from my Upsolute tune (now we're really going back in time) to RC3, I think IBW sold 3 more tunes that evening. I remember taking one member for a ride and during the drive he said "take me to an ATM." He got tuned that night.

Seeing Dan Simoes and Upsolute mentioned in one thread could only be about two cars... IBW and Dan's old red bug (which I own)

Congrats on the milestone Peter!
S