Haven't found a Subaru specific forum that is any good with mechanic afficianado that can answer involved engine and transmission diagnostics type questions. Would like to post here someplace without being lynched...

That has its own forum here.

General automotive discussion. This is intended to be a discussion about other not VW and Diesel cars you may have or interested in.

Not making this up, two Foresters in the shop right this second: 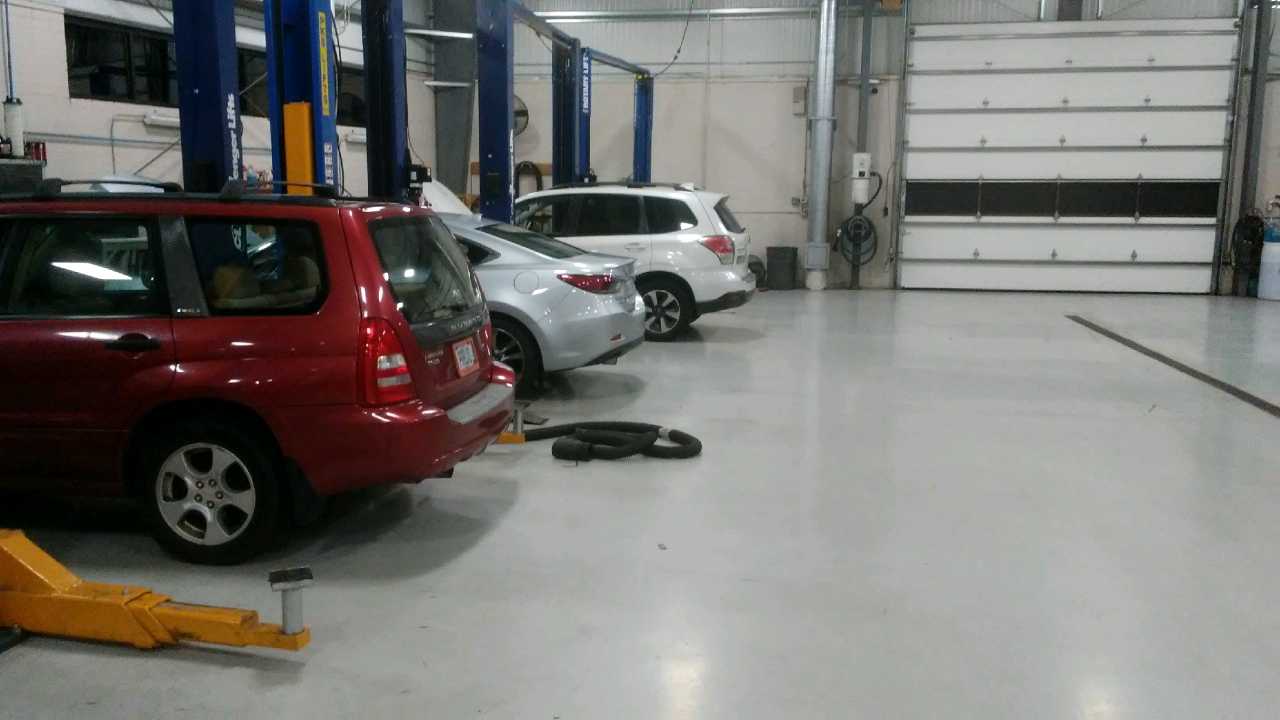 You guys keep your shop nice and clean!

We have two porters that in addition to all the other stuff they do, work hard to keep it that way.

That's the way to go.... I work with office people whos desks\cubicles look worse than my garage\driveway floor during a vehicle repair.... drives me nuts!

OilHammer how are you finding the brz's frz's etc. Same issues? I have a nephew who is jonesing to buy one of them as his first car, I thought theHG issues were fixed on the newer EJ's?
K

The BRZ is a Subaru, built by Subaru. Toyota rebadges a version (originally the Scion FR-S, then after that brand went away, the Toyota 86). Toyota owns Subaru now, or at least a sizeable chunk, as Fuji lost interest in cars. As such, Toyota did help in the BRZ development, and did help provide some bits... mainly the Advics braking system (of which Toyota is part owner), the Aisin transmissions (of which Toyota is part owner), and the Aisin rear differential and axles. They also along with Denso helped provide the GDI system on the engine. But it is an out-of-the-box Subie boxer otherwise.

The chain engines do not have the headgasket problems the belt engines did, but they have oil problems... both in burning and leaking. Seems no matter what, Subies' engines are always trying to shove the oil out of the engine in some way shape or form.

I personally think the BRZ is a neat car, but WAY too expensive for the underpowered tin can that it is. And it is not very practical. Sort of like a Miata in that regard. Good at one thing, but sucks bad at everything else because of it.

those oil leaks on the chain motors are no joke, seems like its quicker to replace the heads on a belt motor than to reseal the front cover mess on a chain motor

ETA: and the catalyst is right under the timing cover so of course any leaks will smoke like hell instead of just leaving a stain on the ground

We service a whole fleet of Foresters (the white one in my pic above), and that's usually when the fleet decides to ditch them... when the oil leaks get to fire hazard level. That still means a whole long list of broken things. The drive axles are the ones that get me. These things are: AWD (so you'd think the torque would be such that the fronts wouldn't be taking ALL the load ALL the time), cursed with a CVT (so they have a very "cushioned" application of torque to begin with), are completely gutless to drive (the non-turbo port-injected 2.5L is a complete dog), and never, ever, split a single CV boot. Yet we CONSTANTLY deal with drive axles on these things that are not just clicking, but they sound like you are feeding ball bearings into a garbage disposal. No idea what pot-metal garbage Subaru uses for their drive axles, but they are even worse than Chaxles.

It amazes me that the VW Vanagon guys install Subie engines in their Vans, especially without re-gearing the transmission. The popular engines they use (2.2 & 2.5) are the very ones with head gasket issues!

And they are worn out after pushing a Japanese tin can down the road for 100k miles.... they REALLY get worked over pushing a loaded German brick down the highway, LMAO. At least they are cheap and plentiful, though. Plus, the waterboxer parts have pretty much dried up lately.

My uncle opened a repair shop in 1973 specializing in VWs. There was a 4-year college nearby which provided him with lots of Beetles to keep going well into the mid-to-late 1980s. The VW Diesel Rabbits as well as the gassers kept him busy too. Anyway, somewhere in there the word got out that he could/would do the Subie head gaskets. So, he basically finished off his career doing Subie head work.

tdihopeful said:
Haven't found a Subaru specific forum that is any good with mechanic afficianado that can answer involved engine and transmission diagnostics type questions. Would like to post here someplace without being lynched...
Click to expand...

The original poster (Tdihopeful), when you come back, post your questions ........


Lightflyer1 said:
That has its own forum here.

General automotive discussion. This is intended to be a discussion about other not VW and Diesel cars you may have or interested in.


oilhammer said:
We fix quite a few of those turds here, you can ask me, LOL. Headgaskets, more headgaskets, engines, cracked catalysts, drive axles, more engines, headgaskets on the replacement engines, wheel bearings, more headgaskets, valve bodies, CVTS, even more headgaskets (shoot, I think we ran out), and of course constant schooling on the necessity of this device called a dipstick on engines that burn through more oil than a Kuwaiti well fire.
Click to expand...

Is that not one, not two, but three, hydraulic lifts? I'm going to ignore what looks like a 4th because I think I already hate you at 3.


oilhammer said:
Not making this up, two Foresters in the shop right this second:

tdihopeful said:
Is that not one, not two, but three, hydraulic lifts? I'm going to ignore what looks like a 4th because I think I already hate you at 3.
Click to expand...

I count 4 lifts also. with the cleanliness and knowledge he has I wouldn't hesitate to bring my vehicles there if I was remotely close to being near him

My Transmission had bound up twice and I had towed twice. After each tow it seemed magically able to drive again. I've kept using it and got used to the feeling of it starting to get draggy or friction building in the trans and pull off the road real quick or out of the fast food drive through as it were,

I'd let the trans cool and then bam it was fine for a while. I thought and thought and figured that I had fixed synchronizing issues by jamming the shifter maybe if I coast down the steep dirt hill from my driveway and downshift into second doing like 30 that I could get away with not adjusting the gear lash the hard way. Haven't had the trans try to bind up since.

We have a total of 10 2-post lifts (one is the heavy duty job that is holding the red Forester), and two big drive-on lifts (one is an alignment setup with a Hunter machine).

Here is my "corner" with my own spots: 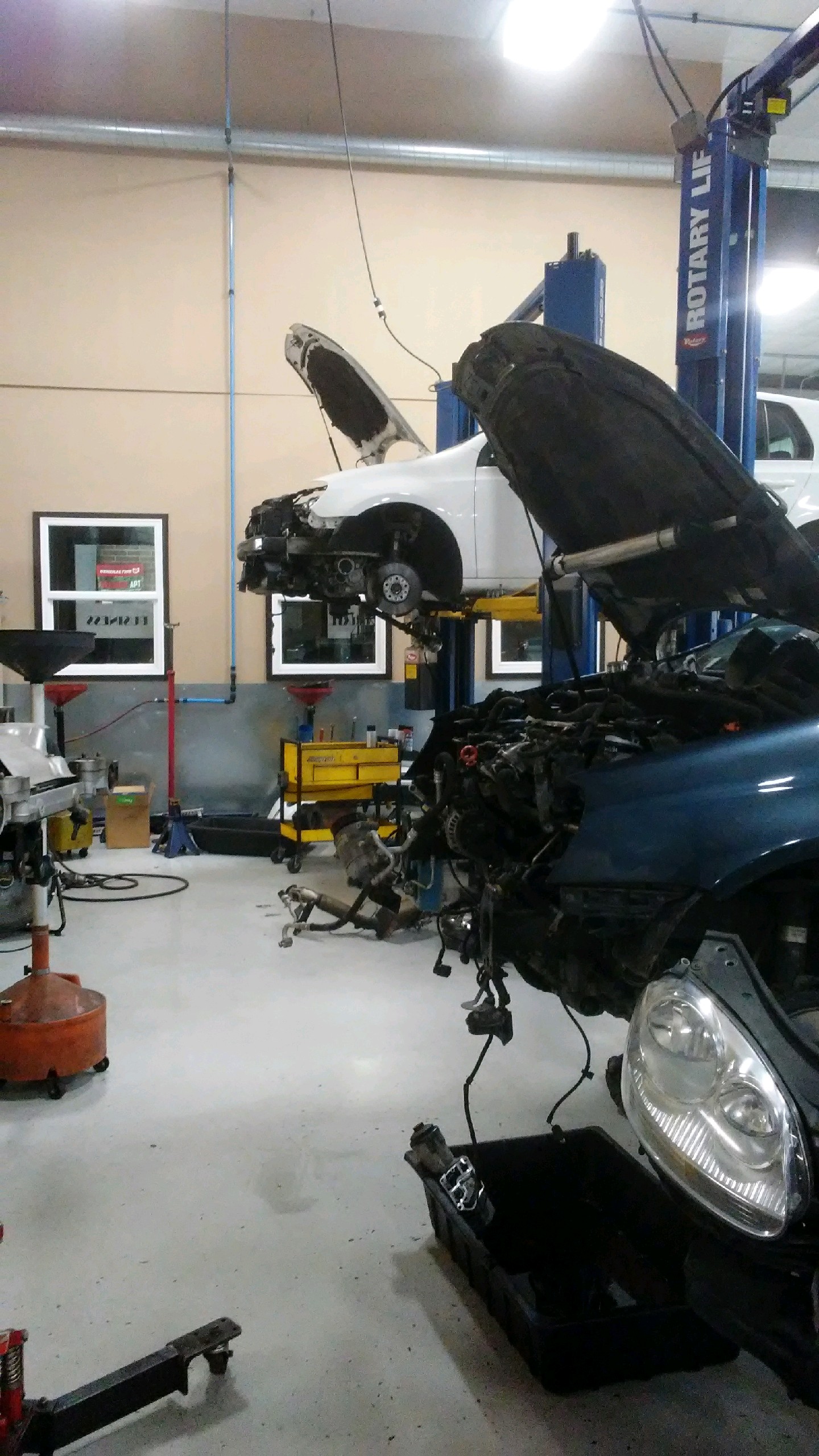 Although sometimes I have the whole side : 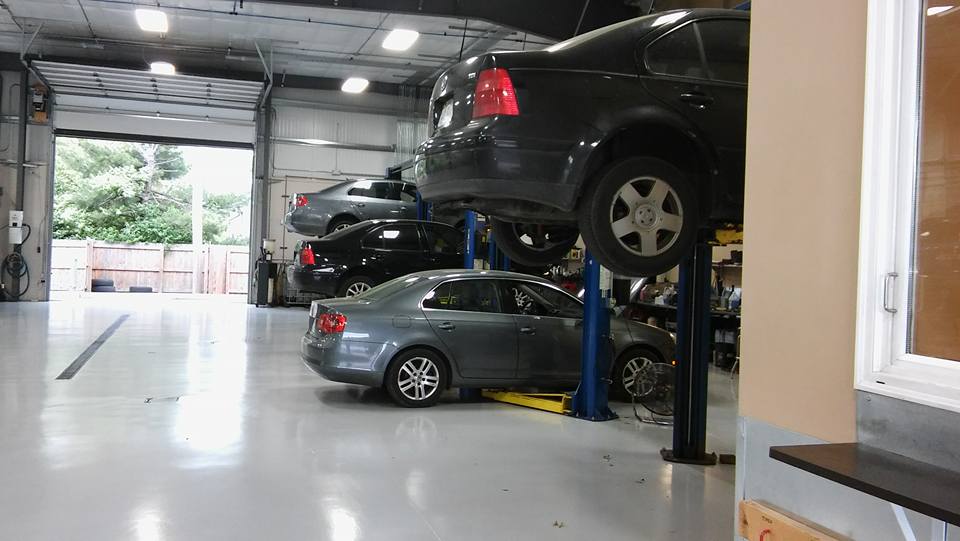 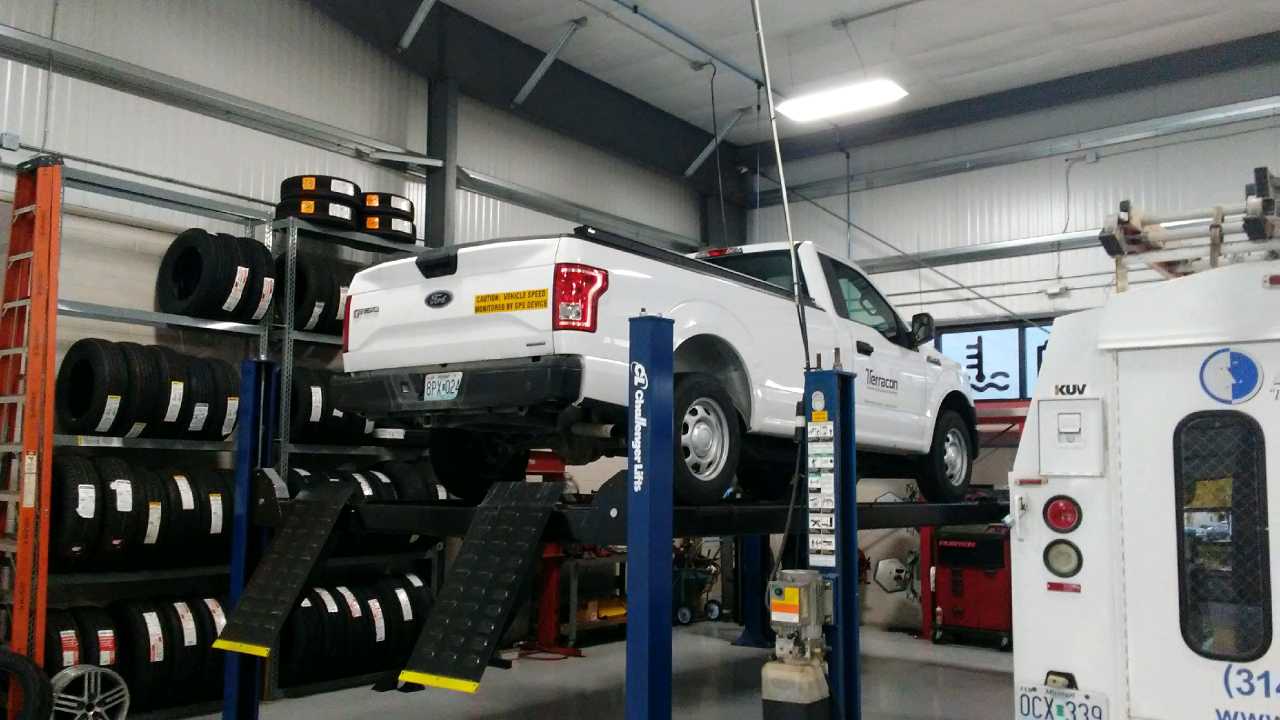 Fun shot from above: 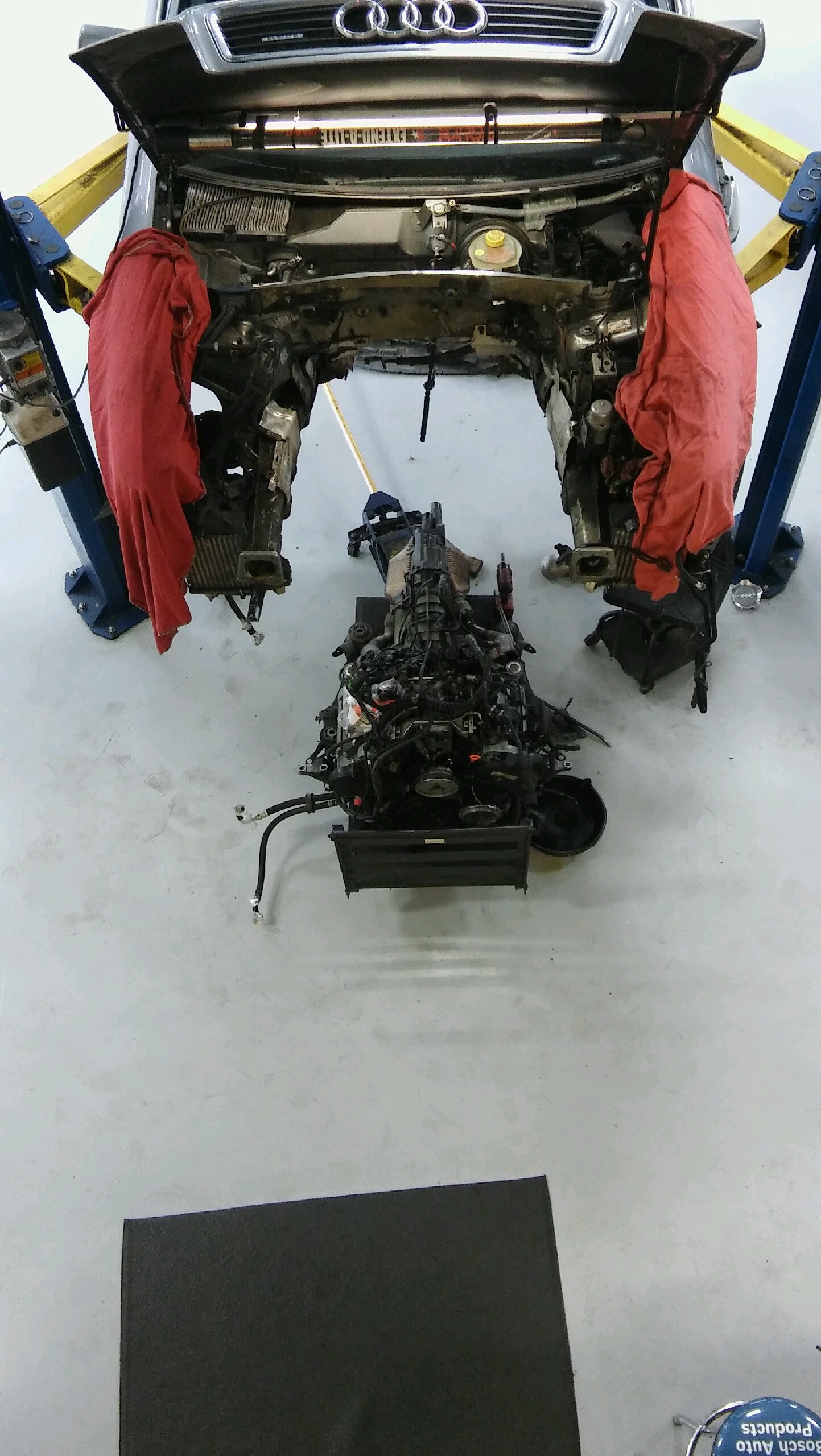 That's a 2001 Audi Allroad getting a new pair of upgraded turbochargers and some other engine resealing done.

And this one is not only very nice still, but is stupid fast. It has a Wett reflash, the upgraded Garret turbos, and a new performance exhaust. Amazing how quick two tons of German AWD tank can get up to speed.
You must log in or register to reply here.
Share:
Facebook Twitter Reddit Pinterest Tumblr WhatsApp Email Link
Top