How to troubleshoot low power on an A3/B4 engine


rdkern said:
It's not just being stuck, it's the N18 valve not doing it's job.

OK, I'm getting there, one problem at a time. I was following the EGR troubleshooting steps, and indeed my upper breather hose from the CCV puck to the intake was split around the hose clamp. Unfortunately, I didn't see that one from any of the TDICLUB vendors, so I went and paid full dealer retail price! $60 for 6 inches of hose. Awesome.

I thought that I may have been sucking in un-metered air, and that's why my MAF actual was always over 400 when requested was 340 (yes, I do have the EGR adaptation value changed up).

The next thing I noticed was that the vacuum to the EGR diaphragm was very weak after blipping the throttle in the EGR diagnostic steps. My vacuum pump / guage was broken, so I didn't have one at the time. I just bought a new one so I'll look at it more this weekend, because I then noticed the recirc door is no longer working. Maybe there is a leak somewhere from my primary vacuum pump if neither is working. How much vacuum should the EGR pressure converter allow to the EGR diaphragm anyway?

P.S. It's getting cold up here in Indianapolis. If someone from the South wants to buy this B4V, I'm sure it will be happy to move to warmer climates!
M


rdkern said:
It's not just being stuck, it's the N18 valve not doing it's job.

I made significant progress today. I confirmed that I was getting vacuum to the N18, but never through it, even after blipping the throttle. I took it out, sprayed silicon through it, tapped it on the floor a few times, and cleaned the electrical connector with electrical contact cleaner. Now, I do get vacuum to the EGR valve as expected!

Next, I sprayed about half of a can of MAF cleaner on the MAF, and cleaned it's electrical contacts as well. Now, my MAF actual readings do follow the MAF expected at idle, low speed throttle, and even full load! It seems like my power is back, too!

I'll keep y'all updated as I drive it more.

I am trying to fix my boost issue. The wastegate and turbo seem to work fine. The wastegate opens at 10 psi and the turbo will boost over 20 psi if the blue hose is disconnected. I have tried another used N75 and bought a new N75 also. All the hoses hold pressure and are connected properly with the turbo hose going to the connector side of the N75 and the wastegate hose going to the side port.
The problem I have found is that the psi in the blue hose exactly matches the manifold pressure. The engine builds boost to 10 psi and then the wastegate pops open. I have checked the voltages on the N75 connector and I get the expected 12 volts and 6 volts. I am planning to log the N75 duty cycle this weekend and maybe the MAF. I tried running the car with the MAF disconnected, tried a different tune and ECU and got no change. Any ides what is causing this?
R

That sure sounds like either the N75 is stuck open, or the tube routing is wrong.

The blue hose goes from the side connector on the N75 to the Wastegate.

The red hose goes from the "end" nipple furthest from the blue hose to the turbo boost side.

The black hose goes from the end nipple closest to the blue hose to the filtered air hose near the air filter. Right? Swapping the black and red hoses will also cause what you are describing.

It was the black hose on the N75. Turns out there were no leaks but it was clogged with a gummy black tar. Must be something with the silicone and the oil. The hose not being able to vent to atmosphere caused the pressure to build in the blue hose. Lots of power now!
T

Limp mode after restart when warm

The following is another thread I started to find my limp mode condition. It was interesting and I believe it belongs in this thread too.

tommydude13 said:
I have a 1998 Jetta with 265k manual trans.
The car will run perfect, build boost and drive completely normal if I start it in the morning and leave it running. But if I shut if off and restart it, it goes into limp mode with no codes thrown. If I let it sit for 4 hours or more and start it up it will run fine again. So it seems to not like restarting when warm.
Has anyone had this issue? or have any idea as to what would cause this?
And yes I have read through the sticky thread: How to troubleshoot low power on an A3/B4 engine.
Thanks everyone
Click to expand...

tommydude13 said:
Finally found my issue. It ended up being corroded wires going to a sensor on the inter cooler tubes above the engine. I'm assuming its a boost pressure sensor or something, please correct me if I am wrong.
I had to take the connector apart to solder the good wire to the terminal and replace sections of the wire to get to good copper. 4 inches of the wire on the bottom and just a little bit of the other one. The lower wire that was the worst, the insulation was cracked and the wire was actually only hanging on by a few strands. After I fixed all of this, no more limp mode.
Not entirely sure the science behind how this was causing it to go into limp mode only after restarting the engine, and find it strange that this never threw any codes, but I'm glad it is working now.
Picture of the sensor: https://plus.google.com/photos/phot...6/6501717607771439970?authkey=CJXHwNHwt-q76wE
Click to expand...

Mongler98 said:
Interesting. I would post this into the forum post about diagnosing limp mode.
Good find, glad to hear it fixed. It makes sense.
If its the one on the pipe going into the intake manifold, that is your Manifold Air Intake Temp
Limp mode is triggered by values that go past the set map limits in the ECUs programming. Voltage or rather the resistance of the amps running though the sensor is measured on all the sensors and the ECU gets its information. A cold copper wire has less resistance than a warm or hot wire. If the wire was literally hanging by a corroded thread, than you now have a wire that was supposed to be 20g but now has a spot that is like 50 gauges (size is example here). Resistants or Ohms is a factor is wire size over volts / watts. In other words, smaller wire when warmed up has a higher resistance and thus will send a voltage signal that the ECU interprets as out of value. All electrical components have a starting amps and running amps. This is usually never factored into anything other than heaters, AC units, compressors and what not where it matters, but the fact is that now you had a warm wire that can’t handle the starting amps when the car is started. In other words yes, a warm wire that small can’t give the right signals to the ECU. Very interesting to say the least.
Click to expand...

I have a 96 passat sedan, and I've read this post thoroughly, as well as other posts related to low power. I've had a problem with limp mode since the day after I bought the car (didn't act that way when I bought it.) I've been getting the 00575 code, 17-10 so I replaced the red/blue/black hoses described as far as I know, the black hose from ECU to the manifold?, and the one from the n75. I replaced the red hose completely, and there was a splice in the blue hose that I hooked into with a new blue hose from the N75, (I blew into the lower section of the blue hose that seems impossible to replace, (but then again I'm fairly inexperienced with these cars) and it didn't seem like any air was getting through). I found a hole in the small black hose right off the EGR valve and I replaced that too. I was also getting the 65535 code, but didn't know what to do with it. After replacing the hoses, air filter, servicing a 7500 mile fuel filter I took it for a drive and still lost power in 4th @ approx. 3500 rpm. Checked the codes and got the same 00575 17-10 and 65535. Read some more and replaced the little black hose inside the ECU (the old one was blowing a little bit of oily goo out the out side). Drove. Same problem, but the 65535 code was gone. Now I've got the 00575 code with a 17-00 Control Difference, instead of the previous 17-10. Does that mean anything?
I guess I'll check the N75 next with a multimeter or via VAGCOM, and go on from there...I'll probably end up going through the whole process, but does anybody have any advice on where to go next, and where to pick up an N75?
Thanks
MTDiezel
Click to expand... 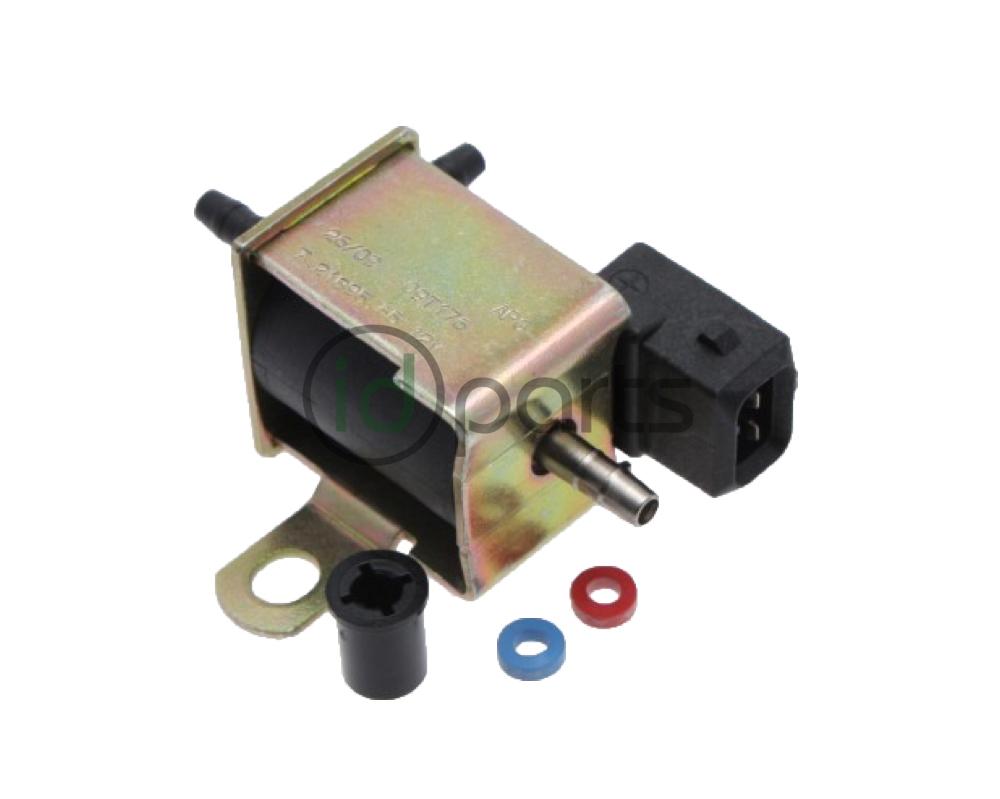 Changeover/Wastegate N75 Valve for A3 and B4 chassis TDIs (AHU or 1Z engines). These have been failing with increasing frequency lately, based on our sales. Though more correctly called a changeove...
www.idparts.com
You must log in or register to reply here.
Share:
Facebook Twitter Reddit Pinterest Tumblr WhatsApp Email Link
Top