EDITED 9/15/21
Selling ASAP, please make reasonable offer and pickup in Seattle, WA, area. I want to buy a newer Honda Fit which better suits my needs.
ALSO, NOTE: crazed road-raging man took offense to my sticking to our 25mph speed limits. Passed me by driving in the parking lane, then blocked road, forcing me to stop. He kicked off my driver door mirror, & dented the door a bit. Ranting & raging - Unbelievable, never seen anything like it before, he was unhinged. Then reached through my open window, snatched phone from my hand (was going to call 911), flung it in the bushes & took off. Have multiple eye witnesses but no plate id (I do have a partial) & no weapon involved so the police are uninterested.

Also if someone has a carfax please message me.


She’s a reflex silver Golf TDI GL. I prefer to think of her the “Superleggera“ or lightweight version, rather than being Poverty-Spec. This means she’s a 2 door with 5 speed, stick shift, crank windows with manual, fabric cover seats that aren’t heated. Does have the Monsoon audio system.
I met her in early 2004, she was so young & cute ... we feel in love during our first dance as we shyly whispered in each others ears. She had such low miles! I soon bought her home to Kansas from Nebraska, she had really low miles and we've been good to each other since. She currently has only140,xxx miles because she's mostly led a charmed life. I still use her a few times a week & on occasional longer trips.
I suspect she was mostly used as a city commuter based on the soot buildup. One freezing, windy, snowing night around 13 years ago, her ASV stuck shut! I cleaned out her intake system once i figured out the issue. Since buying, I used her on daily highway commutes until about 10 years ago, & had other fun toys for weekends, so she still has very low miles for her age. I don’t use her much now, always cycled & bus to work the last 10 years.
We moved from Wichita, KS, to Seattle, WA, in late 2010. With two guys and loaded to the max with my belongings - one of the tanks netted us 49.9 mpg on the way to Denver and we weren’t really law abiding because the roads were very straight & boring. I did get a rather expensive speeding ticket later on that same trip but on a per-mile basis the trip was still a bargain, especially because the cop was lenient on me. Maybe he fell for my disbelief that a gutless 90hp factory diesel could break 80mph

CONS
Years ago, while parked at a friends cabin in the mountains during an xmas break, a bunch of snow slid off their roof & landed on my hood - it buckled. I call it the origami hood mod. Bought a used, reflex silver hood but it needs paint on one corner & haven’t installed it. It's included with purchase.
I replaced the headliner about a year ago, shows a bit of wear - turns out the fabric pills easily when rubbed by stretching arms & hands - nothing too major or unsightly.
Seattle drivers !!!: Rear bumper was pushed in a little while parked downtown. Can be pulled out without visible damage, see photos. Haven't bothered trying to fix that.
Minors dings, scratches, rock chips, needs cracked windshield replaced but been fine the last 4 years - all minor stuff that sounds worse than it is.


PROS:
Dieselgeek Panzer skid plate. www.dieselgeek.com/collections/vw-skid-plates/products/mk4-panzer-plate-heavy-duty-aluminum-skid-plate-kit
Dieselgeek short shifter. Still have the stock shifter www.dieselgeek.com/collections/vw-short-shifters/products/sigma-5-five-speed-short-shift-kit-for-mk4-vw
Timing belt replaced around 65k (fall 2004), supposedly with the 100k timing belt kit, same time as the clutch which was necessary after installing the bigger injectors & driving her once which instantly blew the clutch at full load.
Big Bosch “216” injectors
SBC stage 2 clutch 350 ft.lb clutch on stock DMF flywheel www.idparts.com/stage-endurance-clutch-k70038-p-1244.html
Kerma tune, with the associated tuning box, shortly after the clutch job
Koni FSD Strut and Shock Set, from idparts.com about 8 years ago
VW Jetta springs from a friend in Germany. Don’t remember if I did just the rears or all four. They’re a little stiffer, essentials stock ride height, handles a bit better. Still have stock springs.
Newer golf shifter knob & boot my friend in German sent me - old one was worn. Like the design of this one better, too.
Beru glow plugs several years ago - the 3rd time I’ve had to replace her glow plugs. light is on but it doesn't get too cold here so haven't replaced them. Usually go into mountains with friends in their larger, AWD, cars so haven't noticed any glow plug failures.
Vane Actuator VNT-15/VNT-17 (A4 ALH) installed about 5 years ago when mine failed
Replaced a/c lines, some sensor & pump last summer - that was expensive.
New Autozone battery in early spring. Prior one lasted about 10 years, bought the same one again.
Drivers door lock assembly, still in the box. Remote works about half the time but have been dreading changing it out & haven’t done it yet. Will leave that to the buyer.
Pressure Converter (N75) in a box in case I needed it. Never had issues with the original one so never installed
Bosch Mass Airflow Sensor MAF (A4 ALH) I bought to see if mine was bad. It wasn't so you’ll have a spare.
Various other routine maintenance & repair parts over the years.
Still on stock breathing system - intake, turbo, coolers, down pipes, catalytic converter(s) & exhaust. Leave your cat(s) in if you don’t hate the environment!
On stock steel wheels with Hankook ️snow & ice tires with tons of life left on them. When they were reinstalled last fall I got rid of the 3 season tires as they were worn out.
Full size spare.
All seats in good shape with no rips, stains or visible wear.
Possibly other mods I’ll remember later.

She's a good car, still fun & reliable. Everything works (except as noted), she's in decent shape with remarkably low miles for her age & still fun to drive with plenty of torque.

WANTS:
There’s so much stop & go driving in Seattle that I’m done with DIY shifting. I don’t need a super efficient commuter anymore & ideally I would like to trade for small, automatic, reasonably efficient car that isn't painfully slow(how i wish the Honda Fit came with a K20.) If you have a 128i then please get in touch, even if you don't want to trade, as it's on top of my list. I will need to keep my TDI until I trade or buy a different car.
edited to add: Oops, forgot price was a required item. Asking $5000 or best offer
Pics to follow ...
Last edited: Sep 23, 2021
F 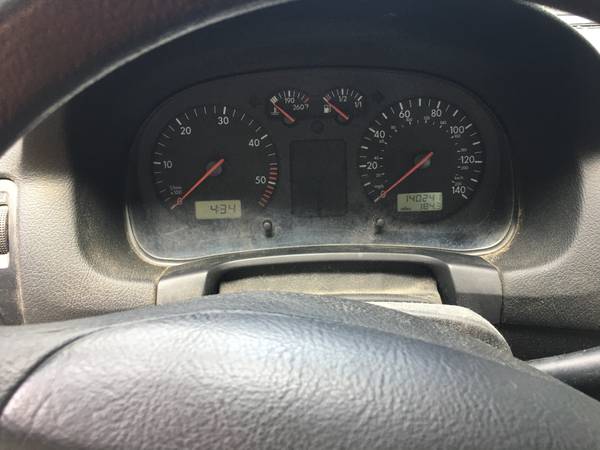 Here’s the link to my album
http://pics.tdiclub.com/showgallery.php?ppuser=9402&username=fstrmnky


In case of any confusion. The photos of the bent fender are old & it has been replaced with a new Reflex Silver fender
Last edited: Jun 29, 2020

Price is required. I thought reflex silver was a 2002+ color?
F

CleverUserName said:
Price is required. I thought reflex silver was a 2002+ color?
Click to expand...

Thanks for the reminder, edited first post to comply with requirements
F

Bumping because I updated the first post with a new ”development” and I need to sell.
I will miss the torques!
thanks
F

Forgot to mention, I also have VAG-COM to throw in if the price is right

Nobody is interested enough in a rust free, low mileage, 2 door tdi Golf to even venture an offer? What has the world become?
EDIT : forgot to mention, bought another car, this one needs to go soonest
D

Dylan,
Try this link or search on my username and some of the results will show album pics 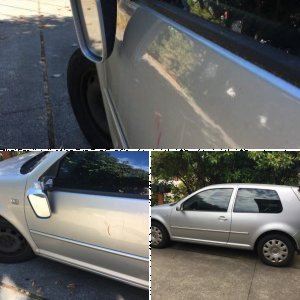 The top section of my first post, lower price, is current
F