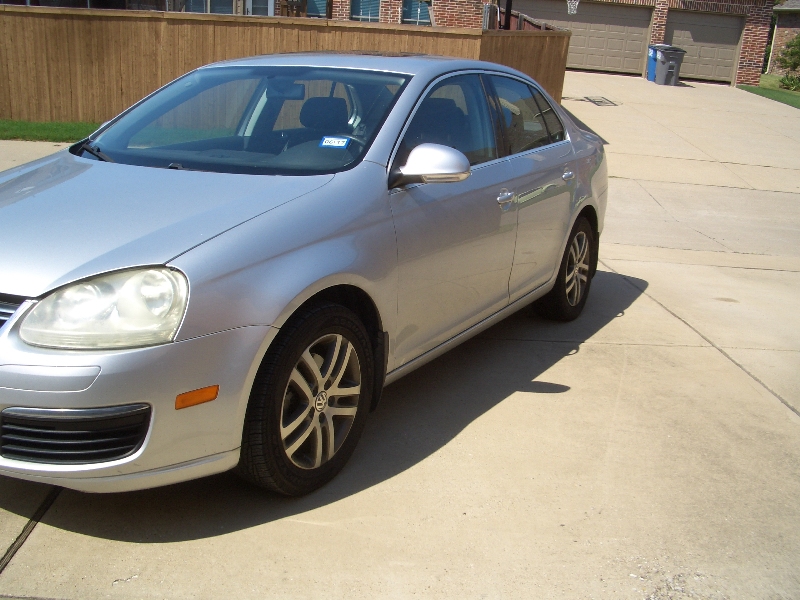 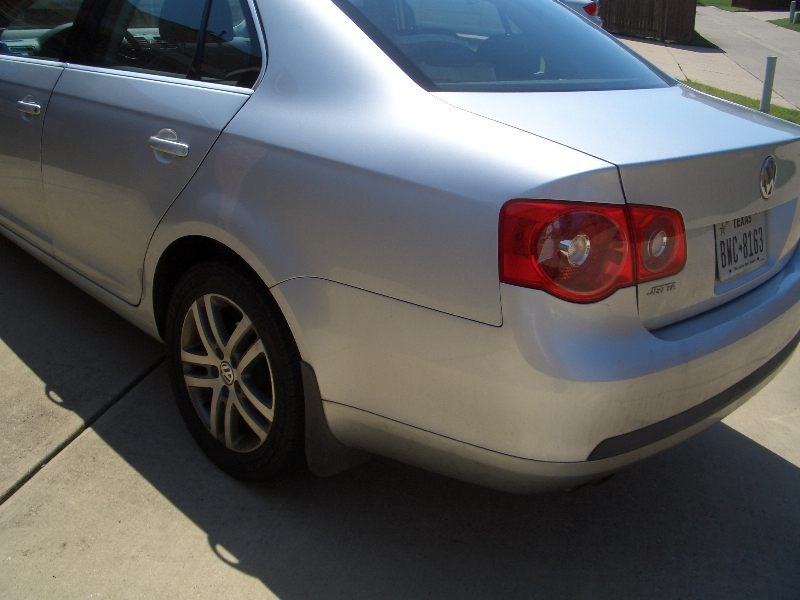 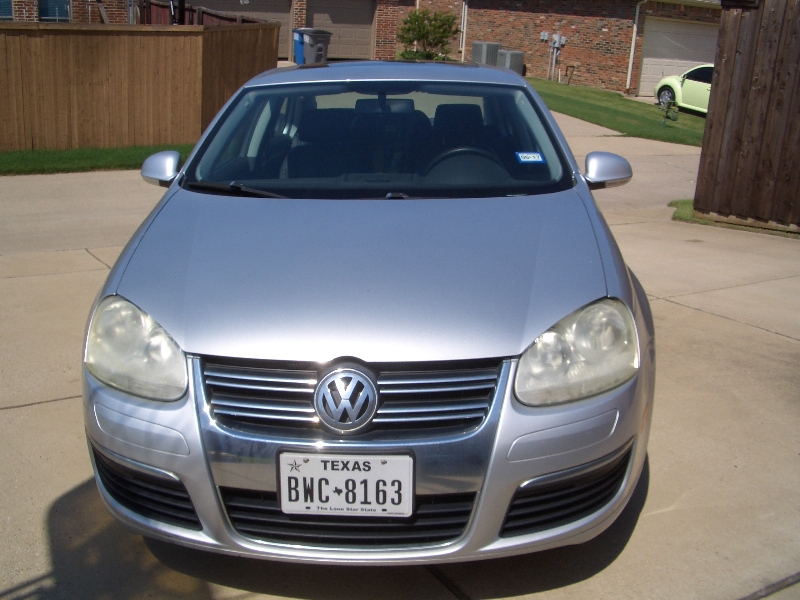 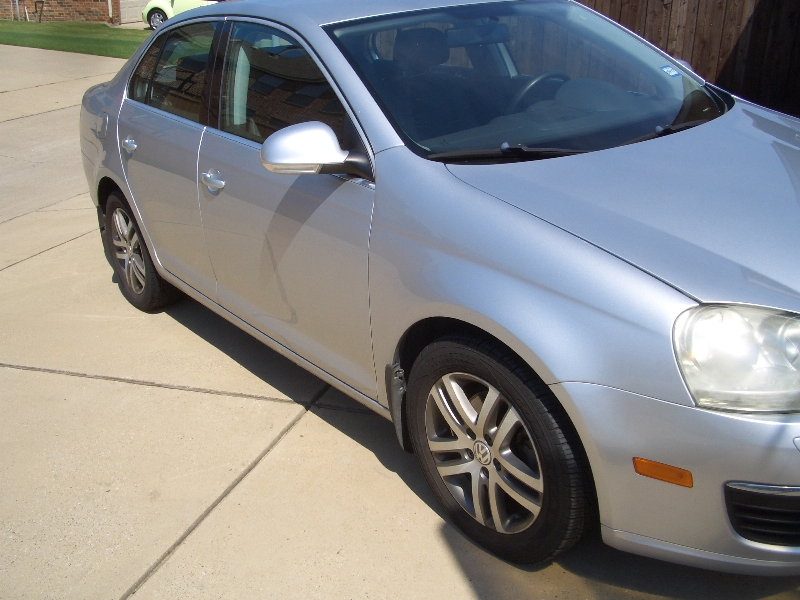 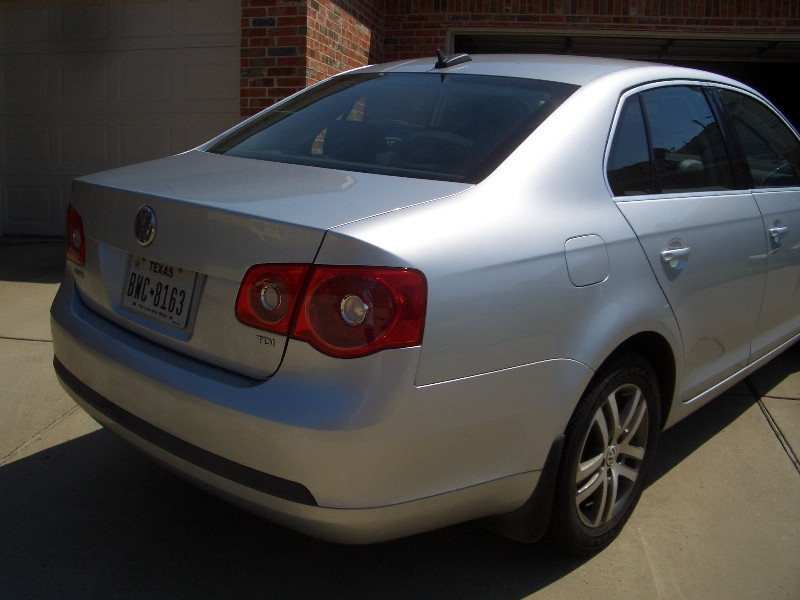 It is silver with the dark grey interior. Package 1 car with the DSG.
So it has heated seats, but is the leatherette.
It just hit 54k miles, probably will be closer to 55k when I sell. 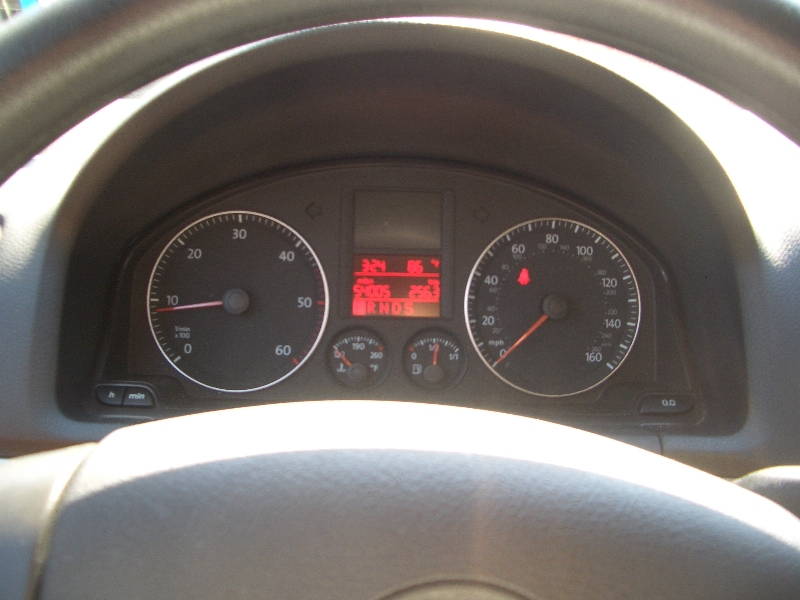 I am the original owner. Bought it new in July of 06.
Non-smoker
Used Amsoil oil and wix filters on it since new.
Stock, no engine mods or whatever done.
Things I have changed:
DRL are off via vagcom
Added the Jack point pads
took off the wheel locks and replaced them with regular lug nuts and covers.
Changed the remote to open and close the windows and sun roof.
There is no window tinting on the car either. never added it and it didn't come that way.
No accidents just hail repairs mentioned below.
Repairs
VW replaced the head liner, brake booster and blower motor under warranty the first couple of years I owned it.
Paintless dent repair was done last year after a hail storm-They also replaced the hood insulation they messed up while they had it.
Maintenance
Oil and filter changes ever 10k miles or 1 year
Fuel filter sometimes at 10k or so depending on if I noticed a mileage drop
at 40k air filter, dsg oil and filter, oil filter, oil, in cabin air filter, fuel filter
at 6 years I changed the timing belt, tensioner, water pump and it seems like there was another item like an idler and the serpentine belt. 2012, don't remember the exact mileage, but it was after the 40k work.
I did all these things myself. Bought the tools from metalnerd and the kit of stuff from IDparts.
I replaced the rear brake pads around 40k miles as well. Fronts are still factory.
I also have done the brake fluid flush every 2 years as well.
Tires have less than 10k miles. Goodyear assurance triple tread.
tires just rotated for the 7k rotation.
Original full size spare still in the trunk.
Alignment done every year or so.
Just replace the battery last month. The last battery lasted since 7/11 and the one before that was the original.
Things wrong
The overhead controls for the sun roof is peeling
The recirc motor buzzes instead of putting the a/c on recirc.
Sticky radio buttons
Window button edges are white now on the drivers side.
monster mat on drivers side is broken up. but I have the original carpet mats still, never used.
Trunk bars that lift the deck lid are held in by zip ties. The plastic arms that held them on the nubs broke off, so I used zip ties to hold it in place. They work fine otherwise.
Plastic engine covers, the black edge around the silver center is broken on one side. It fits correctly and looks ok, but if you take it off, it flops around.
The air intake along the front is missing a tab. Stays on, just can be knocked off easy.
There is a fresh door ding on the passenger side. Cut into the paint.
No dent, just gouged the paint a bit.
Along the fenders near the top next to the hood, similar paint cuts from where I supported the engine when doing the timing belt change.
A few chips in the windshield from rocks. but not cracks and these are all surface things.
And I am sure the normal paint scuffs along the front and rear bumpers.
The rubber line that holds the gas cap when it is off the car, also broke.
I drove it a lot the first 3 years, then got a job working from home, so I only needed it on the weekends. So since around 2012 I only put 14k miles on it.
It is a daily driver and since I changed jobs I am putting around 250 miles a week on it.
I get about 36 mpg and 500 to a tank.
I always get the bottom cafe number even with all freeway driving so that doesn't mean it can't get better. But it allows me to fill up only 1 time every 2 weeks, so good enough.
But I need a bigger car now, so getting something different.
Let me know if this is even a reasonable price. I know people can be cheap, but I am in no rush to sell so I have time on my side.
I am also waiting on deals on the new car I want before I buy, so again, this is just checking if I am nuts or not for what I want.
I know the dealers are not going to give close to that on a trade. I got one offer for like 4k or something from carmax.
Last edited: Sep 2, 2016
A

just curious asking too much? issues? not enough info?

Andrew, you have a nice car there but it is still 8+ years old and as you know, dealers won't give you much for it as they have to make a buck on it or send it to the auction.

Most folks here are a bit cautious of the 2005.5 - 2006 MKV TDIs due to the issues with camshafts and electrical problems known to these cars. While they are a nicer platform than the earlier MKIV's, thye really never had a big following as they were "interim" models to the later, 2009 and above, diesels.

Clean ones like yours should sell, but not for what you wish to get out of it. We see a lot of them go for the $4 - $5K range, but rarely much more.

If I was you, I would drop the price to see if you get any interest here. You might want to view the "completed listings" section on eBay for your car to see what some have sold for as that is a pretty good indicator of recent sales.

Thanks.
I am seeing 4 to 6, with 3 times the mileage on ebay.
I had hoped the low miles might help a bit.
Guessing 6-7k is is more reasonable? or still too high?

Andrewh said:
Thanks.
I am seeing 4 to 6, with 3 times the mileage on ebay.
I had hoped the low miles might help a bit.
Guessing 6-7k is is more reasonable? or still too high?
Click to expand...

I would say that lowering the price may bring in an interested party, but realize that you may be in for a lower offer.

Also, you have not mentioned the dual mass flywheel and if it is or has been an issue or has already been replaced. That's a big problem on these cars as the vast majority of them fail at less than 100K miles (start to rattle as the springs fail). Mine failed on my 2005.5 Jetta and was replaced at a cost of $1,200 a few years ago. A knowledgeable buyer will know about this issue, especially anyone here.

I'm not trying to discount your car, as I believe it appears to be one of the nicer and more desirable MKV's for sale here, but just trying to educate you on what's up with this particular model through my personal experience.
A

I have not done anything with it. I had thought since it was a july build it had the upgraded version already, but haven't had any issues at 54k miles so never looked into replacing it.

Timing belt was just my paranoia due to age, otherwise it technically wasn't due yet either.

Something like the flywheel at least gives you notice so I wasn't worried like the timing belt.

I have checked the wiring harness at the door and it seemed fine.

Anything else I missed? If nothing else this is a good prep for craigslist ad.
C