The speed sensor has a square tang that fits in a square hole in the drive pinion in the transmission. When the sensor gets old, it can get sticky and doesn't want to rotate. That tends to round off the tang and the hole as well.

The sensor will then give a fluctuating signal even though you're traveling at a steady speed. The cluster heavily damps the needle movement so you don't see the needle jumping up and down. BUT - when the cruise control is engaged, the fluctuating signal causes a "surging" feeling like the throttle is being opened and closed. Again, this in only when on cruise control.

In my case, I started getting this surge when on cruise. It felt like the throttle was briefly snapped open every couple of seconds. It came and went some, seemed to go away if I was over 70mph. This went on for 50K miles or so.

Finally, one day I was on a rural highway going 60mph (not on cruise) and I noticed the speedo needle dropping down 5mph or so every few seconds. I turn on the cruise control and got very hard throttle snaps every time the needle dropped. Quickly turned off the cruise, needless to say.

When I got to the next town, I pulled out VCDS and fired it up. I opened "Instruments" and selected Group 001. I logged this as I drove at a steady 50mph (90kph).

You can see from the graph below that the engine speed was quite steady but the speed sensor was fluctuating all over the place. During this drive the needle was dropping farther down (20-30mph) every couple of seconds.

Engine speed is in blue, the vehicle speed sensor is gray: 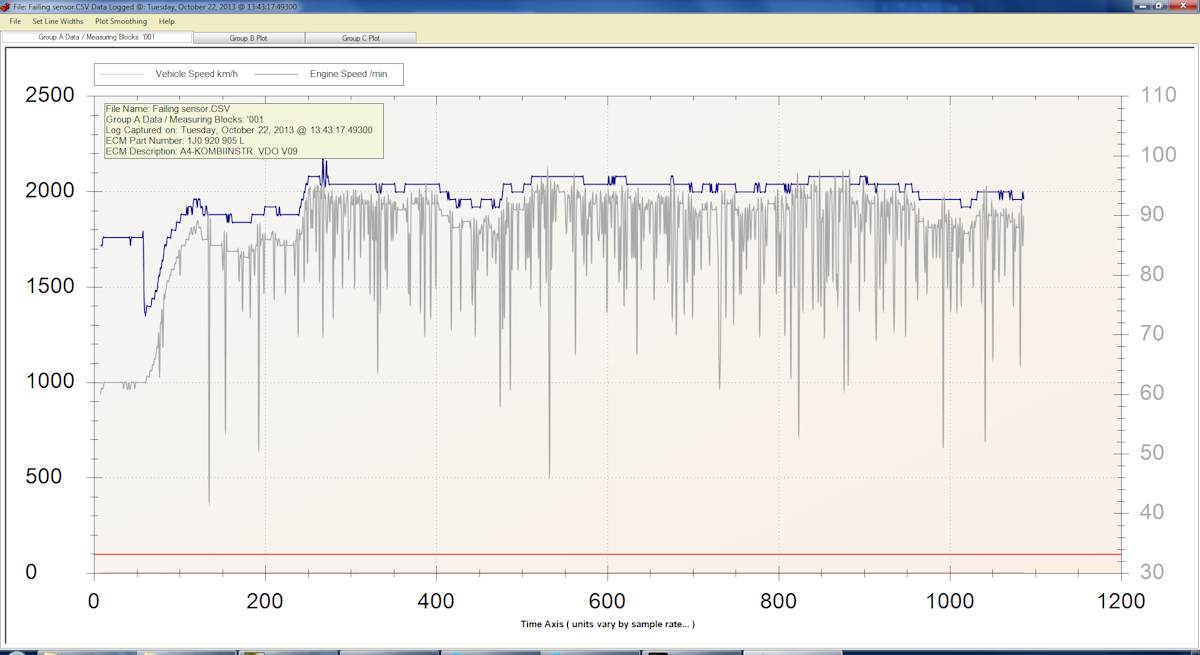 After the log, the needle started dropping lower and lower and eventually read zero. The speed sensor had totally failed.

Note: the car runs just fine with a dead sensor. I noticed a very slight hesitation sometimes when starting from a stop, nothing critical.
You will notice that the fuel gauge needle will be swinging all over the place as you drive. Apparently, the fuel gauge needle is heavily damped only when the car is moving. With a dead speed sensor, the fuel needle is completely undamped and moves up and down as fuel sloshes around the tank. If you're somewhat low on fuel, the low fuel light/buzzer will sound when the needle bottoms out. This is annoying, but no harm is being done.

I have a A4 chassis car with a manual trans. No idea if the auto trans used different parts or procedures.

If you're getting the surging on cruise, the pinion will be stripped out and should be replaced along with the pinion guide and the speed sensor.

The pinion and guide look like this, guide on top, pinion below:

Before installing them in the transmission, you snap the two pieces together.

Insert the pinion into the guide until it snaps into place. This takes a little bit of force.
Note just above the gear part of the pinion is a wide flat flange. That flange must end up right up against the guide.

Here is what they look like snapped together properly. Note the flange on the pinion is right up against the guide:

Theoretically, you can get to the speed sensor from the top, but it's way at the back of the engine compartment and there is a lot of stuff in the way. Much easier to get to from below.

Put the front of car up on jackstands or ramps.

Unplug the wire from the speed sensor. It uses the standard VW locking connectors as seen below. There is a small tang (green arrow) that must be moved in the direction of the red arrow in order to release the connector. You'll be doing this mostly by feel.
The speed sensor can rotate back and forth, you won't break it if you need to rotate it to get the best angle to get the connector off. 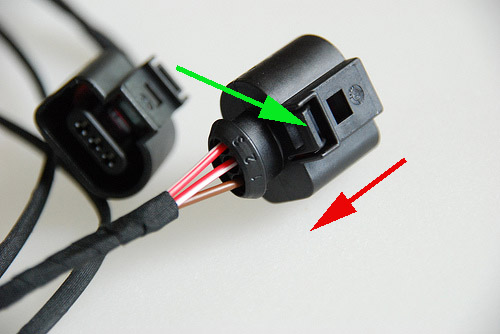 The speed sensor looks like this. You can see the square tang that engages the drive pinion. 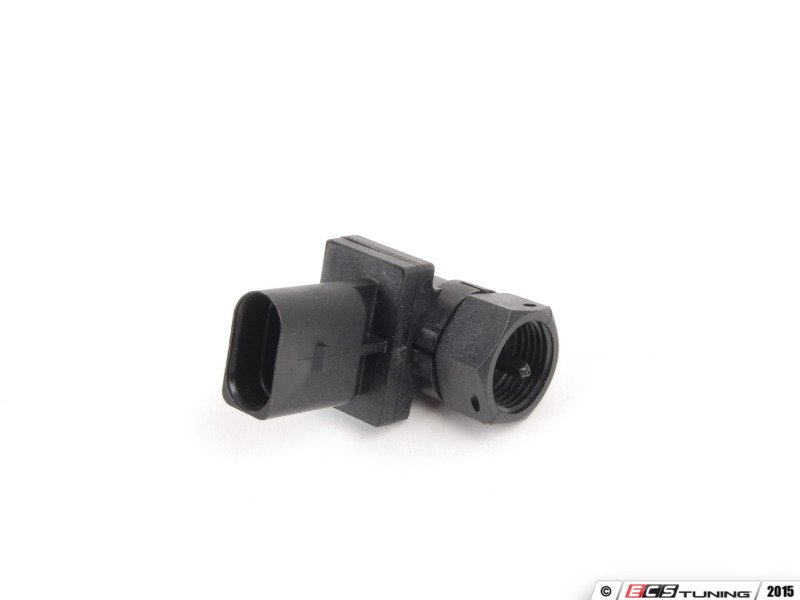 The speed sensor has a 22mm hex on it. I found a standard 22mm wrench is too long to fit, I used a crescent wrench. A pair of pliers or channelocks would work as well.

Once it's loose, unscrew the sensor and pull it off the trans.

The pinion guide also has a 22mm hex. Loosen it with a wrench or pliers.

Unscrew it and pull it up and out of the trans.
Note: it'll be covered in trans fluid. Have a rag/paper towel ready to catch the drips, don't let it drip on your face or in your eyes!

Take the assembled pinion and insert it into the trans. Spin it down until it's all the way in.

Lightly tighten the pinion with your wrench/pliers. About 1/16 of a turn is plenty, it's plastic so this is no place to be a gorilla on the wrench!

Spin it on hand tight, then lightly tighten with the wrench. Same thing, it's plastic so don't over do it.

I rotate the sensor so it points roughly towards the electrical connector. I don't want the wiring to be kinked when attached to the sensor.

Attach the wiring connector. Slide it on until you hear/feel a light click as it locks in.

Replace the belly pan and put the car back on the ground.

That's it! Literally, it takes longer to get the car in the air and the pan off than it takes to replace the sensor and pinion. 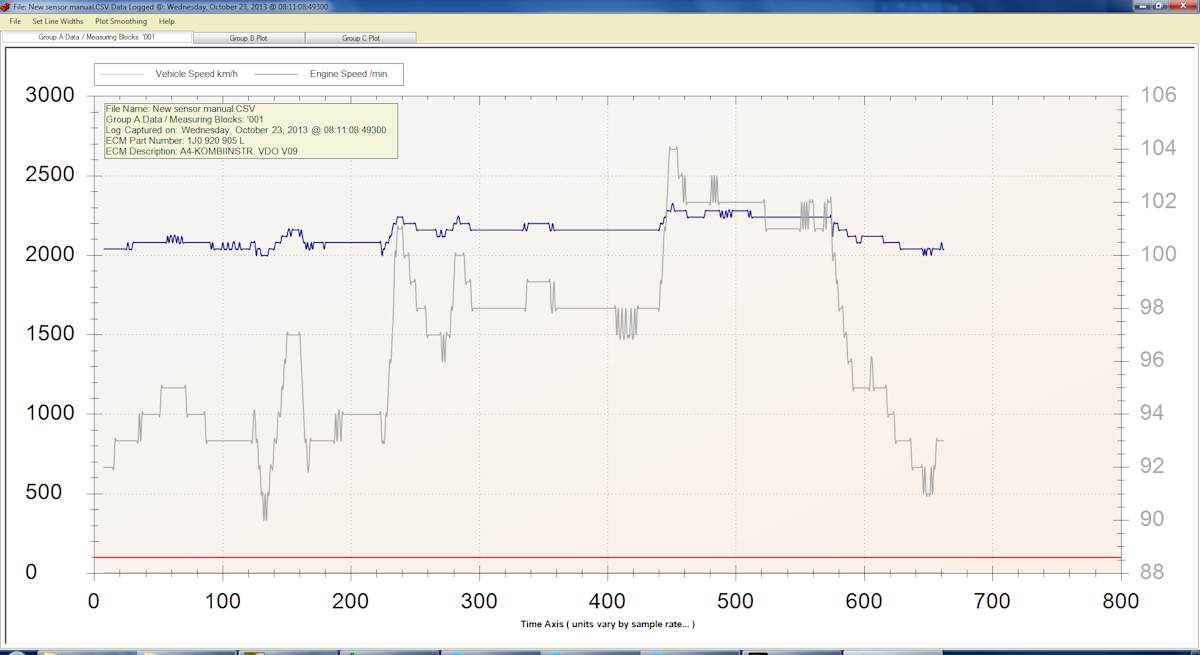 Great write up. My '04 Jetta Wagon (338,000+ miles, 5-speed manual) had the same symptoms, speedometer jumped around like crazy, and then just quit working altogether. I ordered the parts you specified (sensor, pinion, and guide). Heated up the garage (it's 7 degrees outside!), put the car up on ramps, removed skid plate, found the speed sensor, and removed it. The gears on the pinion were pretty chewed up, so replacing was a no-brainer. Put everything together, took a shower, and went to bed.

Next day I drove the Jetta to meet a friend, and once I got out of the driveway the speedometer went up to 5PH, then dropped to zero and stayed there.

Got home, put the car back up on ramps, cranked up the kerosene heater, and got to work. Pulling the sensor assembly out was a lot faster this time. The electrical connectors look fine, the teeth on the pinion look fine, what's the problem?

I've searched the forums for answers, and I'm getting conflicting information. One post says the gears in the differential are plastic (nylon) and he's replaced several. But any pics I can find of the internals of the diff, I don't see plastic gears.

Is there anything else I should check? I do have VCDS, but I am a rookie with it.

more info on the sensor, guide, and pinion

Can anyone point me in the right direction, for what to examine next?
Here's a picture of the bad gear (teeth) on the pinion: 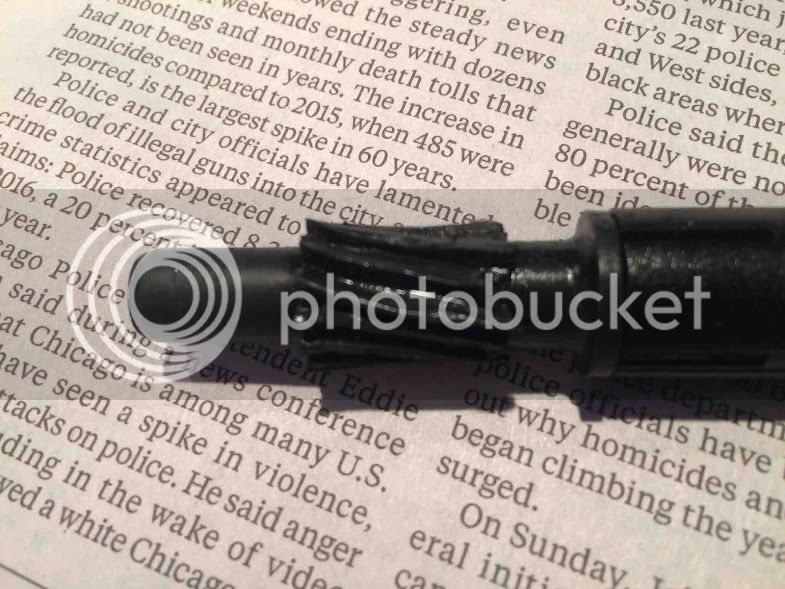 and here's the replacement part that I ordered & received:

The new part looked to be an exact replacement of the old one, same size, same electrical connector, same part numbers stamped in the plastic.

very good write up. its a shame he didnt get a single comment or a thanks though....
D

Thank you very much!!

Maybe try to get a visual in there or plug in the speed sensor attach the gear to it and spin the gear with a drill with key on to see if you get a vss reading either on dash or on vagcom. If you do then the drive gear is probably stripped or broken.

And I did try to get a visual. Bought a cheap $10 Chinese borescope. It works pretty well for what it is, but when I run it into the differential through the speedometer sensor hole, it doesn't give me a visual - because it is immersed in gear oil! Duh, I didn't think of that.

So now, no visual.

Any suggestions on what to do next?

There are some fuses that can blow and make speedo inop. You can drain the trans fluid then look into the trans hole with the boroscope.

If the problem is inside the trans you can "get by" by using the speed on a GPS or your smart phone. There are phone apps that use the GPS to calculate speed.
J

Thanks fr the write up.
I gotta try this on a customer 2003 car that is doing the surge during cruise control.
The car has 450K by now so it is likely that the gear and sensor drive would be worn.
V

Replaced sensor from under the car

In taking it out, it came out gear, housing and all. The sensor wouldn't unscrew from the gear and housing in the car, coming out, so I installed all 3 at once. Luckily I only needed the sensor. No more cruise control or speedo "jumping around" issues. Thanks again guys.

since you folks bumped up this post and I made a video regarding a similar problem I'll post the video here.