Hi everyone! I've been researching, looking up and down forums, checking prices, and watching youtube tutorials. I feel like I need some advice before I go blowing $1200+ on my TDI.

First off, engine has 233k miles and i believe original turbo and no mods. there was a known exhaust leak (coming from turbo area) when i purchased the car.
About 5 months ago I noticed a major loss in power when I was driving up a moderate incline in 5th gear @ ~2200 RPM. shortly after a CEL came on, and I diagnosed with an OBD2 scanner and got a low boost code, I think it was P0299 (CEL and code doesn't appear anymore) also noticed a bit of oil in the intake tube before the EGR. A shop mechanic friend said it could be an oil seal blew out, however there isn't any smoke out of the exhaust when the turbo goes out and there isn't any smoke other than a little bit sometimes during first start/warm up (which i hear is normal for diesels)
I'll kill the engine and rest for a bit and then drive away with full power, but it will come back if I punch it in 5th gear between 2k-3k RPM and back into limp mode. I don't purposely drive to the point it starts limping, but lately when it happens im driving up hill on the highway in 5th and it wont throw a CEL or register a code in the ECU - just loss of power.

My question is could the exhaust leak throw the turbo into limp mode that easily? I am planning on some minor power adders like custom intake, 11mm pump & injectors and a tune so maybe just getting a new VNT15 would be the best choice as far as longevity of the vehicle?

TIA for any considerations !
R

The first place to start is to go through the vacuum system. All those little hoses, as well as the 2 valves that control them
in the rear of the engine bay. Get the proper Gates hose from Idparts.com and replace them one at a time, and there's a check valve that goes as well. Mebbe $30 worth of hose and a couple hours of fiddling around. You're likely loosing boost due to a small leak or crack in one of the lines or fittings. Do this first, then you can start checking the N75 valve, turbo actuator, etc. The vacuum pump itself can also leak at the connection to the larger diameter hose.
R

Oil at the intake seems to plaque the tdi. I have it too. Check for turbo outlet side, intercooler in/out and to intake. Those hoses can pop loose and pop off and give you the same result.
R

or burst on an older car*
D

Thanks Rrusse11, this should have been my first resort than blaming mechanical failure. my local oreillys has gates hose, I'll see if they have the right diameters. might be a few days, with this being my daily to work and actual results of the issue. and thanks rhill2901, I'll check the charge pipes while i check vacuum lines!
Cheers
D

so I replaced the vacuum lines and the turbo was boosting well on the flats, but after about 30 seconds of full throttle I was around 3000-3500 rpm in 5th gear and the boost dropped out, no CEL no codes. I noticed a lot of oil coming out the bottom of the EGR, i think going to the diverter. like it is dripping oil. I dont know if a leaking EGR can throw me into limp, but I was planning on removing it after I get it smogged.

Also took a look at my charge pipes and they look okay except the rigid plastic elbow that connects the intercooler to the EGR, it looked like it broke loose from the mounting screws and rubbed against the pulley next to it - it is not visibly worn through, however, there is a crack that runs over the face of the damage and I cannot tell if it is bad enough to leak.

Can a slight leak in the charge pipes really throw the turbo into limp? wouldn't I just have lower power rather than completely limping?
D

im going to replace the entire charge pipe system with Kerma TDI's upgraded SMIC plumbing kit, might even grab an aftermarket SMIC just for good faith. also going to pull the turbo and replace the manifold gasket and find the exhaust leak.
Taking care of the exhaust leak and the charge leak should fix any pressure/boost issues within the turbo system

I had a similar problem once and it was the MAF sensor. I would replace that first before tearing into the other things you are mentioning. It is a very easy job to replace the MAF and they are not too expensive. At your mileage it would make sense to have a fresh MAF unit. 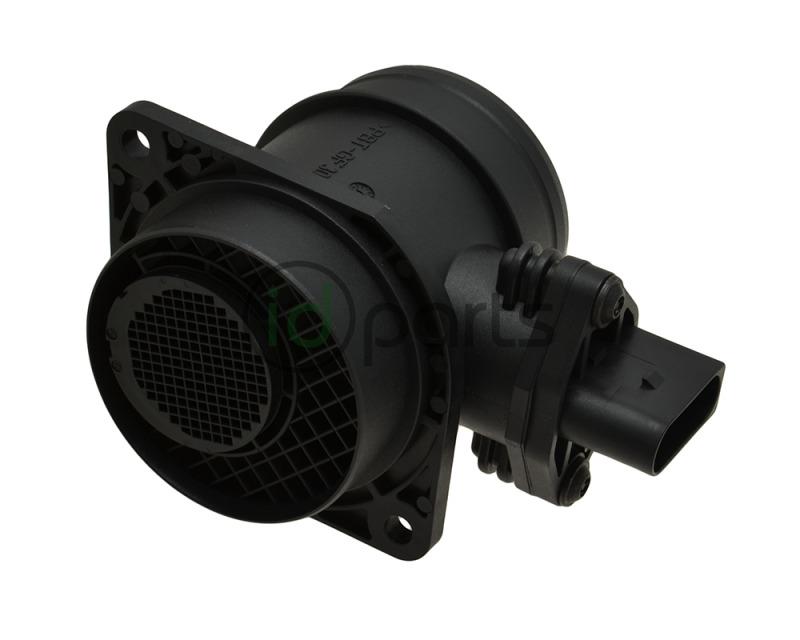 went and pulled MAF from housing, looked pretty dirty, cracked around some glue and some corrosion built up on one of the elements. Ordered new MAF sensor should be here tuesday.

For fun I cleaned the sensor with MAF cleaner spray and got a lot of dirt off. I think there was improvement on how long the turbo holds boost, now I'm able to drive up the hills I was having trouble with in 5th gear and power holds. However, I still had the issue it just took longer to happen

I once had a boost gauge adapter blow out and limp mode happened quickly. The hole was less than 1/4" diameter.
Last edited: Oct 5, 2020
R

DieselBro,
A new MAF is a good idea, and so is replacing all the turbo plumbing,, I highly recommend an upgraded SMIC. Get the all alloy one meant for the 1/8t on Ebay for ~$100. It doesn't take much of a leak to trigger "limp mode". You're on the right track, then if you want to upgrade the turbo, a tune,,,, you'll be all set.
D

Thanks all, I think it's fixed! and I sort of cheated?

I did further research on the MAF sensors for the ALH engines, also searching for a possible alternative, less expensive, more available part.
I came to this thread https://forums.tdiclub.com/index.ph...-gas-maf-will-do-and-is-5-times-cheaper.7003/
Seems like the TDI sensor isn't as durable as the sensors from the 2.0, and the 2.0 sensor might be slower. either way, I decided to special order it from the local oreillys, ended up being $75 instead of $119. (believe it or not the TDI sensor is actually harder to get in my area from the stores, despite the 2.0 sensor being a special order from both NAPA and oreillys)

So today I popped it in and went for a drive. Turbo boost held under hard acceleration uphill, past 3500rpm in 5th and it just kept holding to the end of my 1 mile run. throttle response seems ever slightly improved. car seems to be happy. I guess my issue is resolved! for now.

As Rrusse11 says, im on track to doing some improvements after this. A new SMIC and alum/silicone plumbing kit. after smog, EGR delete, PCV oil catchcan. later, I want to do a step up on the injectors, 2.5" straight exhaust and a tune. I hear I can push the stock VNT15 turbo a little further so I might look into that.

Really thank you all, it was getting frustrating wondering what part of the turbo system was failing and the last thing I wanted to do was pay a shop mechanic $150 an hour to figure it out. I dont mind hunting around my engine but I need to know what I'm looking for.
R

DB,
Congrats! While you're looking for the SMIC take a look for a BMW catchcan on Ebay. ~$25, all metal, nice quality.
Buy some PVC hose and some liner clamps. It'll help to keep your new intercooler clean, and stop the turbo from sooting up, especially with an EGR delete. 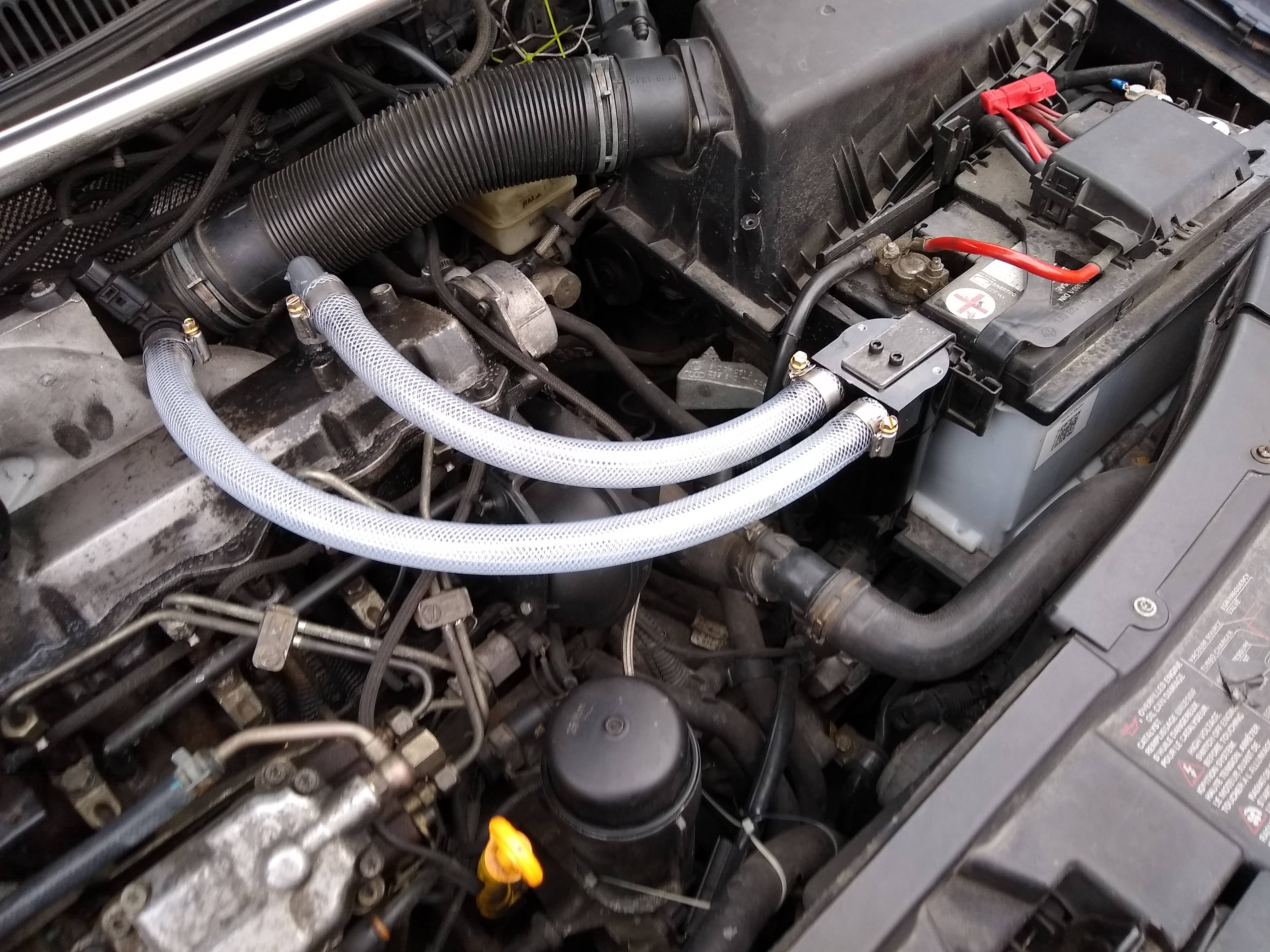 I spoke too soon. The new MAF sensor didn't fix the issue. Which is weird this is almost sort of intermittent.

I found the nipple to the vacuum pump is loose and spinning in circles, along with some oil seepage. Also found a crack in the brake booster vacuum line so I'm going to replace that today.

I also tried to move the turbo actuator with the vacuum line disconnected, and it doesn't budge by hand. Isn't the actuator supposed to move relatively easy without much force?

Yes, it needs to move. Sometimes you can free it up. Next step is to determine if it's the actuator or what it's connected to, the VNT mechanism. There is a little clip on the rod (very easy to lose) to disconnect it. Once you have that off, excersize the vanes and the actuator. If you're lucky it's just the actuator, believe you can still buy those for a VE. Good news is you've found the problem (or just the first one. Get the motor happy before upgrades.
D

Thanks @BobnOH That was a good video of the movement of the vane arm. Mine does not move that easily. I was reluctant to disconnect the actuator from the vane arm yesterday because it looked like they would spring away from each other, buuut I'm going to do that tomorrow.

So correct me if I'm wrong: limited movement in the actuator/vane > turbo never engages fully > Low MAP/MAF readings at WOT > ECU cuts vacuum to the turbo to disengage vanes to prevent damage thinking there's a leak somewhere in the charge pipe?
D

I'm going to call it quits on this problem. I got the actuator to move the vane mechanism more freely. seemed sticky. And the low boost "limp mode" doesnt get triggered as much. didnt happen at all yesterday and I drove the hell out of it

The turbocharger and manifold are very rusty, so much I would be afraid of breaking studs. some nuts on the EGR cooler connections are almost disintegrated and looks like i would need to replace or tap new studs into it. I tried yanking on the exhaust down pipe at the turbo, wd40 the bolts for an hour, no budge and I would have twisted them right off if I didnt stop. the downpipe gasket looks like a rusty layered pancake being squeezed tight. Honestly I'm afraid to push this turbo any more than it can do now.

Think i'm best off replacing the turbo system and clean the exhaust and intake ports. I want to keep this car strong for another 230k without any issues down the road due to rust or funky seals.