I've been working on measuring Exhaust and Intake Manifold pressures on various cars and finally have a small compilation of data to report. This has been recently discussed in this thread Sounds like we need a kit for measuring EMP! and in this thread EMP as related to the VNT 17/22, but I thought I'd start a new thread with the results.

The data is taken with a combination of devices. Boring technical stuff follows

Second - the external pressure measurements for Exhaust manifold pressure, intake manifold pressure, Airbox pressure, etc are taken with 0-50 PSIG pressure sensors on 0.5-4.5Vdc signal so they have the ability to read a little over/under pressure. Accuracy is decent at +/- 0.25% best fit straight line combined linearity, hysteresis & repeatibility with a total error of +/- 1% of full scale (0.5 psi maximum error). They will withstand 2x over pressure (100 psi) without calibration shift, -40 to 250F operating temp. These sensors are read by a 10 bit A/D converter which gives 0.061035 psi resolution and samples at 0.01 seconds/100Hz on all channels. This is then broadcast over CAN and saved as a .csv file.

There is a switch that can be put on any of the sensors and shorts the signal to ground which effectively gives me a trigger. I will switch this from shorted to not at the same time that I click the Marker button at the beginning and the end of the block of data that I'm interested in. I go into each file and find these two points and align the data about these points. The gaps in the data are copied from the previous known data point which is why the VagCom data is "blocky". These two files are manually merged together so as to be as close to time synchronous as practical/possible. Depending on the response of VagCom markers this can be up to a second or more off, but for the most part it's close enough to get the idea.

I'll just post "pictures" of the data for now (I'll try and improve the quality of them in the future). If there is something else you'd like to see (I'm thinking of trying a plot vs RPM's instead of time?), so long as it's in the original data file(s) it's pretty easy to do. If anyone has interest in the raw data files, PM me with your E-mail address and I'll send them to you in varous stages of post processing. If anyone is a whiz with merging .csv files together with different sampling rates of different data and filling in the blanks, I'll take any help I can get. There's about 2 hours of work in merging each one of these pairs of data files to get them to the point where I can spend ~3 minutes generating the pictures you see.

Thus far the below data is taken during a 3rd gear run from ~1500 RPM, going to 100% throttle by ~1800 RPM and running it to ~redline. This is a balance of getting enough Vag data to make it worthwhile and keeping the speeds semi-safe (they're way beyond legal if we were to be on a public road). Suggestions are welcomed for future testing methods, things you want to see, see different etc.

I'm trying to get a variety of configurations logged. I didn't get as much done at the GTG as I hoped, but will try to continue to get additional data points. I'd currently like to get a stock 5 speed ALH tested as well as an A4 PD 5 speed, also stock. I'll try to attend regional GTG's if there are people willing to have this testing done on their car to contribue to the greater good. This will be an ongoing thing I hope, PM me if you're interested and we'll see we can coordinate something. 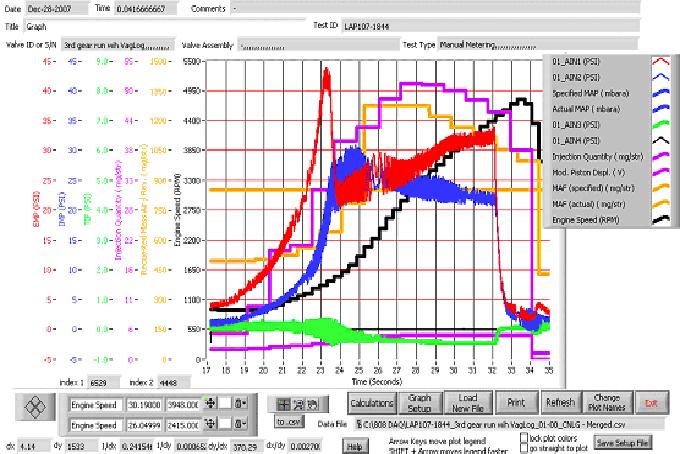 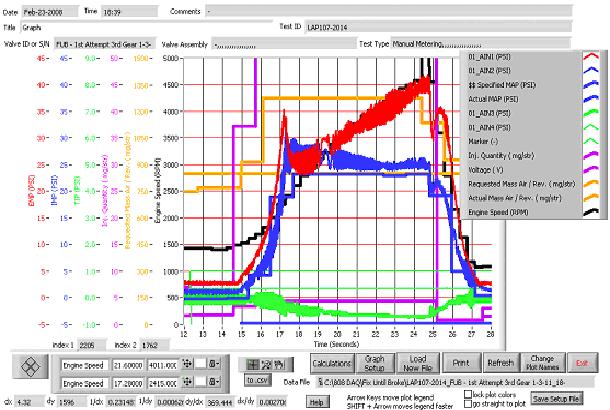 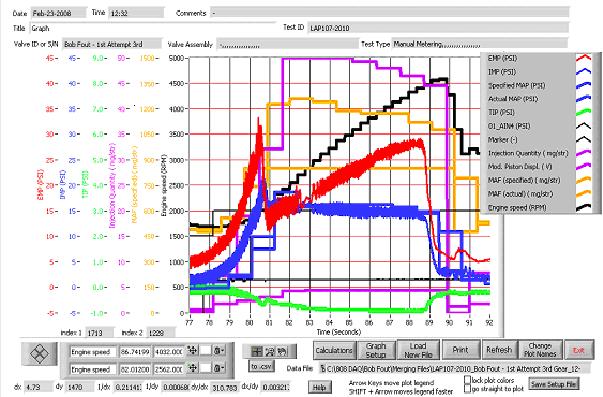 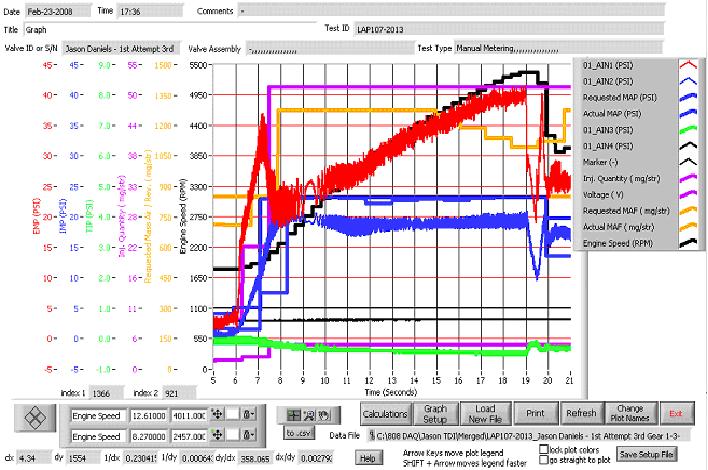 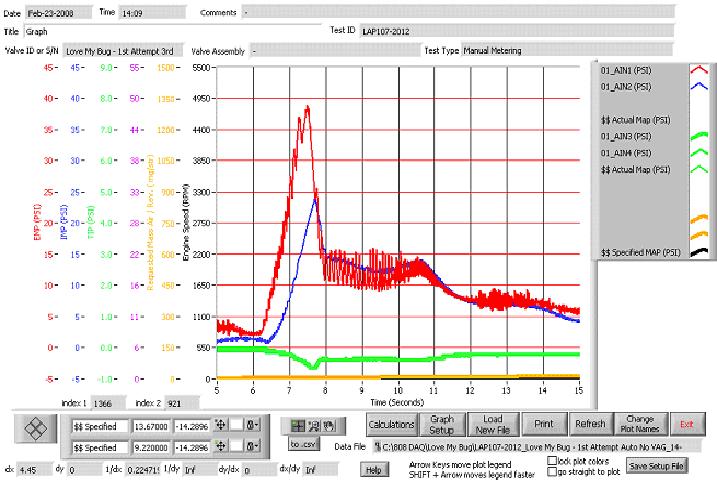 Well - It's the future, so how about some more data

Signature capture for reference in case I change things.

I made up a downpipe pressure measuremnt flange for VNT17's so I could evaluate exhaust system pressures. I put an OEM downpipe with Cat on my car for other reasons and figured that I better get some measurements before I removed it and put my 3" one back on. 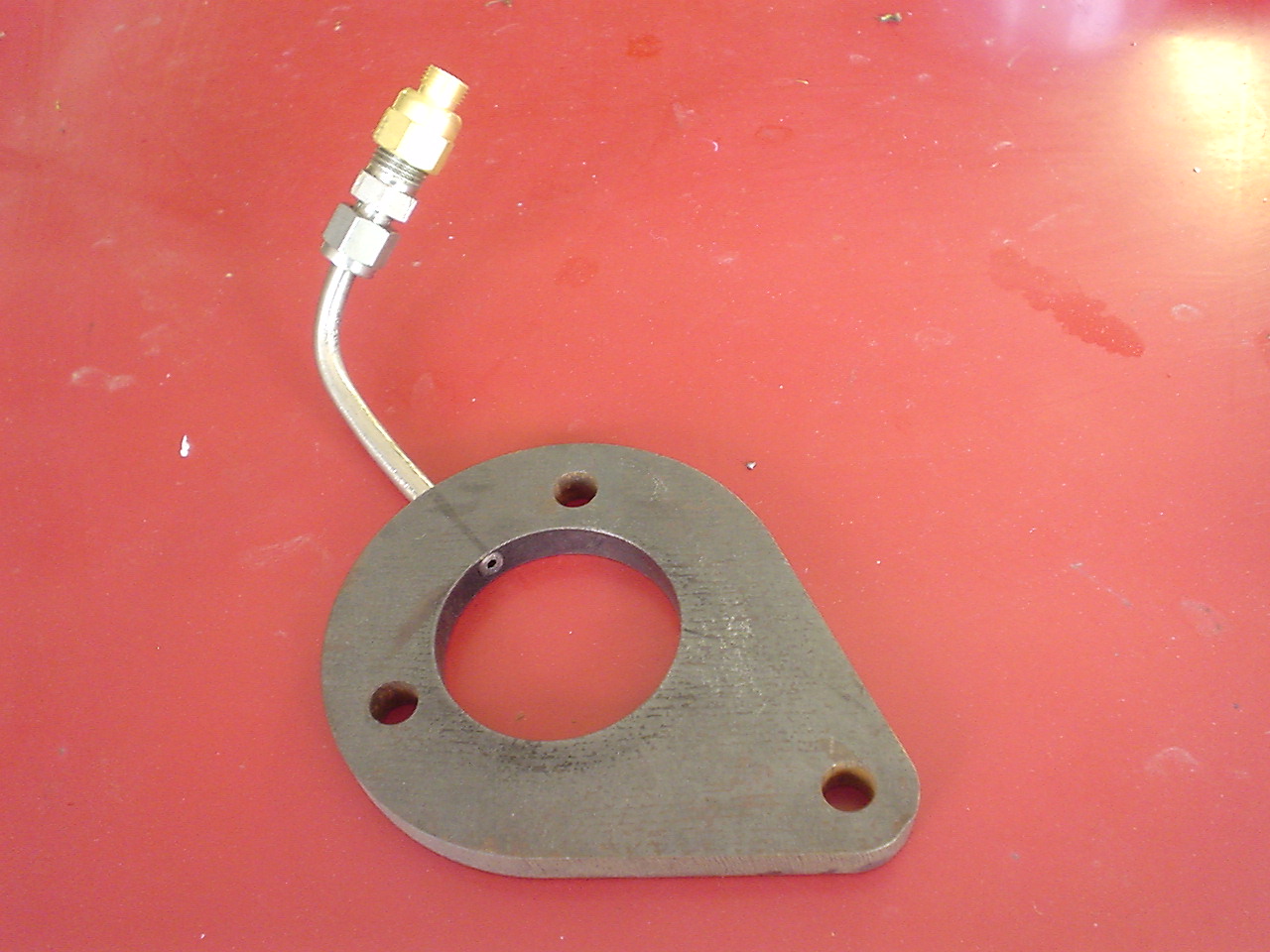 The flange is compliments of LurkerMike (now Savage Diesel).

I know it's not the ideal measurement location/method due to the spinning gasses exiting the turbine, but short of getting a pitot tube and getting all sophisticated about it (to which there will still be questionable measurements), this was the best approach I thought. Suggestions/comments are welcomed.

Pics below are on a VNT15 but the testing was done on my 17/22. The hole in the exhaust flange matches the 17's exducer right on and is centered even though it doesn't look like it in the picture. 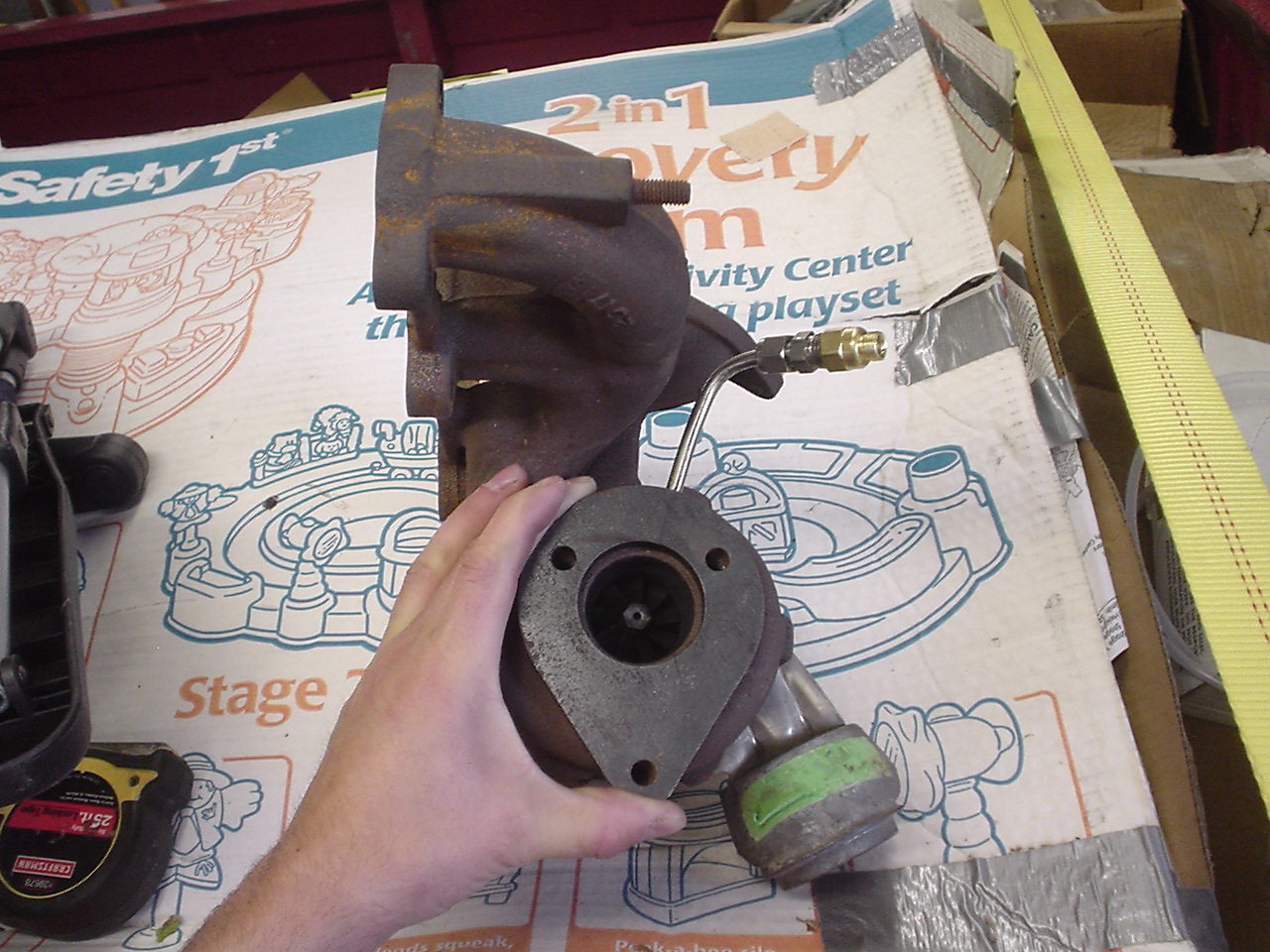 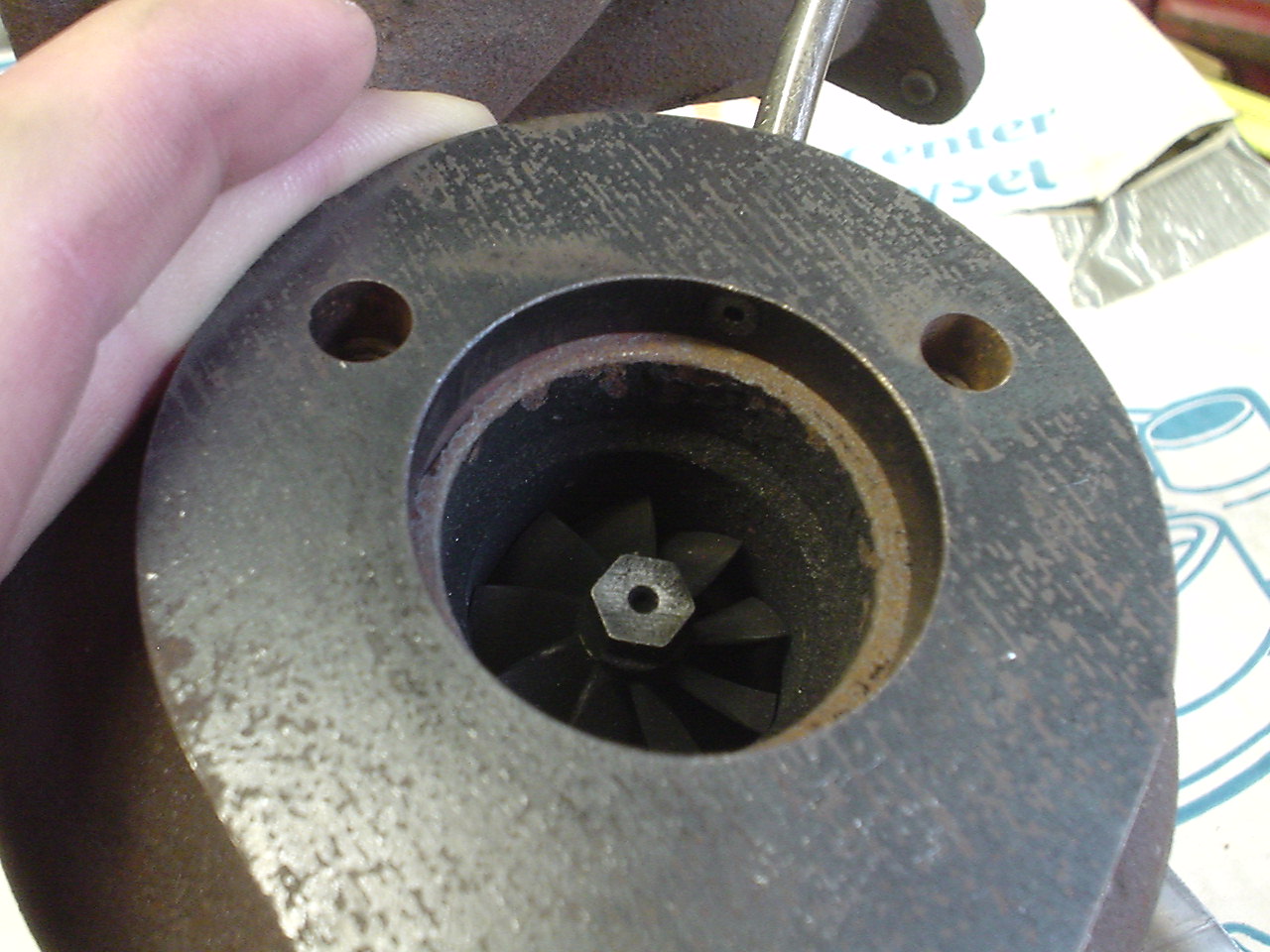 Below is a full throttle 3rd gear pull with an OEM downpipe and cat and the above mentioned modifications in my signature. The OEM tube continued past the cat until the OEM band clamp location just in front of the mid support. The rest of the exhaust consisted of a 4" tube following the factory path with a 4" straight through muffler in the factory location and a 4" 90 degree turndown at the end. While the 4" part of the exhaust does pose some restriction to flow, I'm assuming that it's negligable. 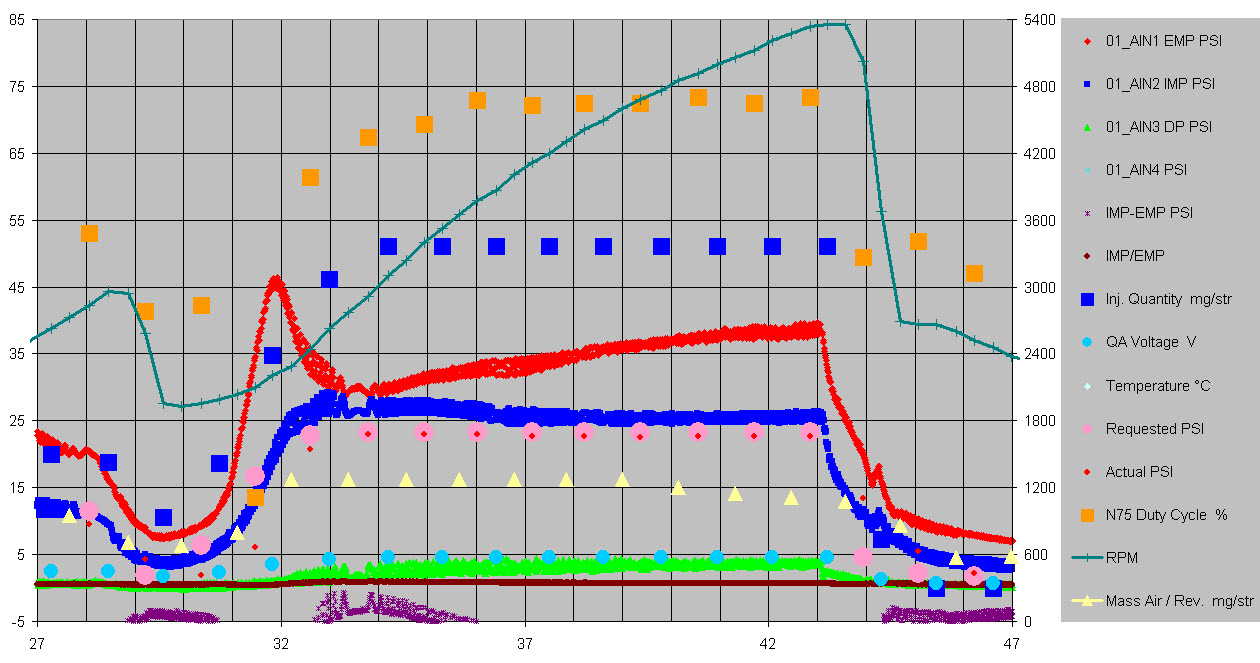 I made a similar measurement device in my 3" downpipe flange, however it's not as nice. I don't have a picture of it with the measurement tube installed, but it's in the same location as the one above and otherwise looks the same. There is a sudden expansion at the flange/measurement location. In hindsight, I should have used the same measurement flange shown above to take the data on the 3" downpipe, but I didn't. Something to do at a later date. 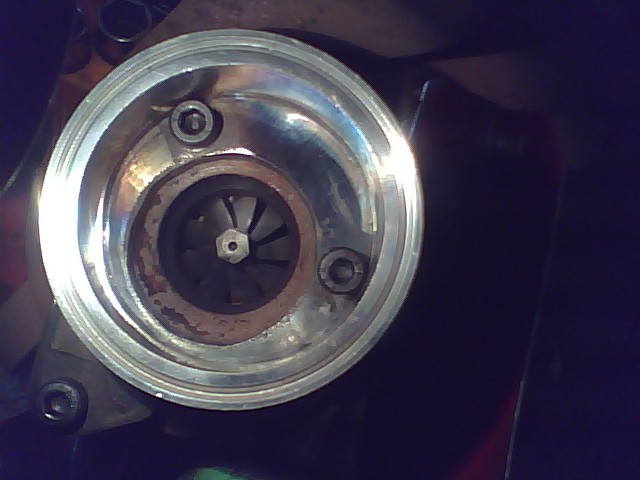 Here's the same full throttle 3rd gear pull as above, but with the 3" downpipe. 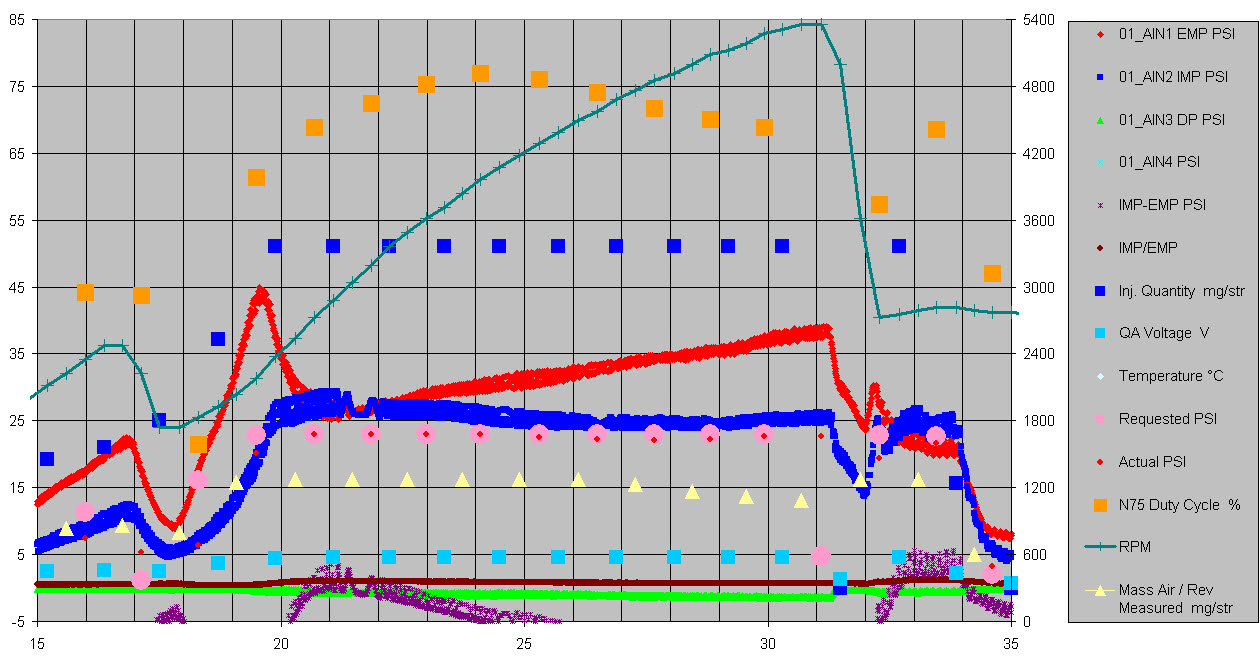 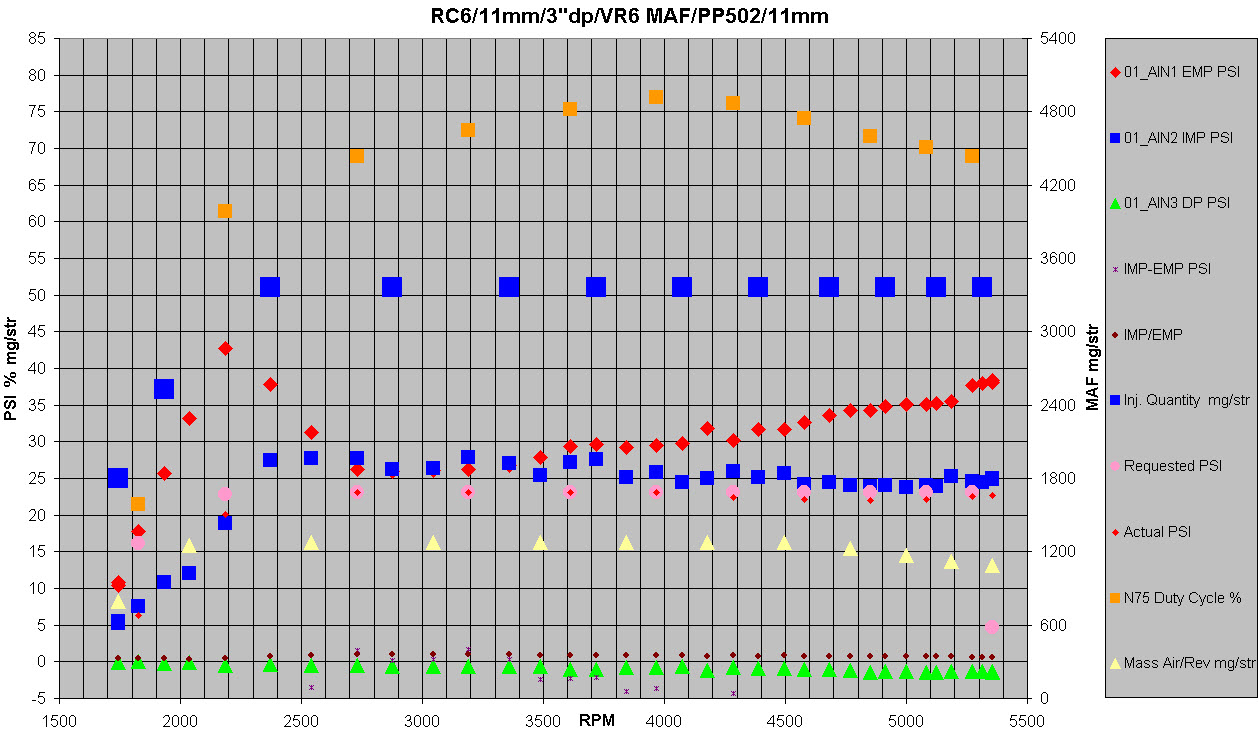 I seem to have troubles getting anything to show up as big as some people do so I'll decode the colors in the graphs for you (the graph colors are the same between them).

Big difference here from the data in post #1 is the exhaust downpipe measurements.

The 3" downpipe is actually creating a vacuum sucking the exhaust out of the turbo (yeah right!). This, I suspect, is due to the sudden expanson at the measurement location with the 3" flange I mentiond earlier compared to the other one that is matched to the turbo exducer.

No really big revalations here, just some data to back up what we've though all along I guess. VagCom data is still exceedingly slow. If anyone knows how to make larger pictures (just using snag-it) of the data so it's easier to read - let me know please.
Last edited by a moderator: Dec 14, 2010 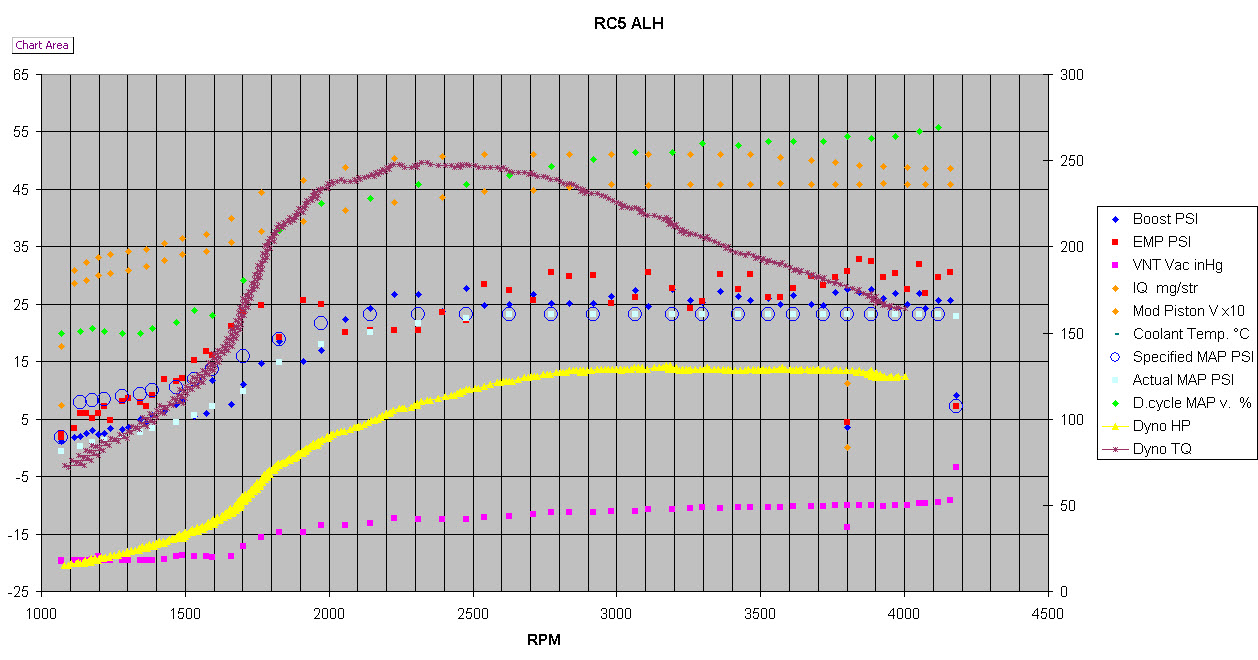 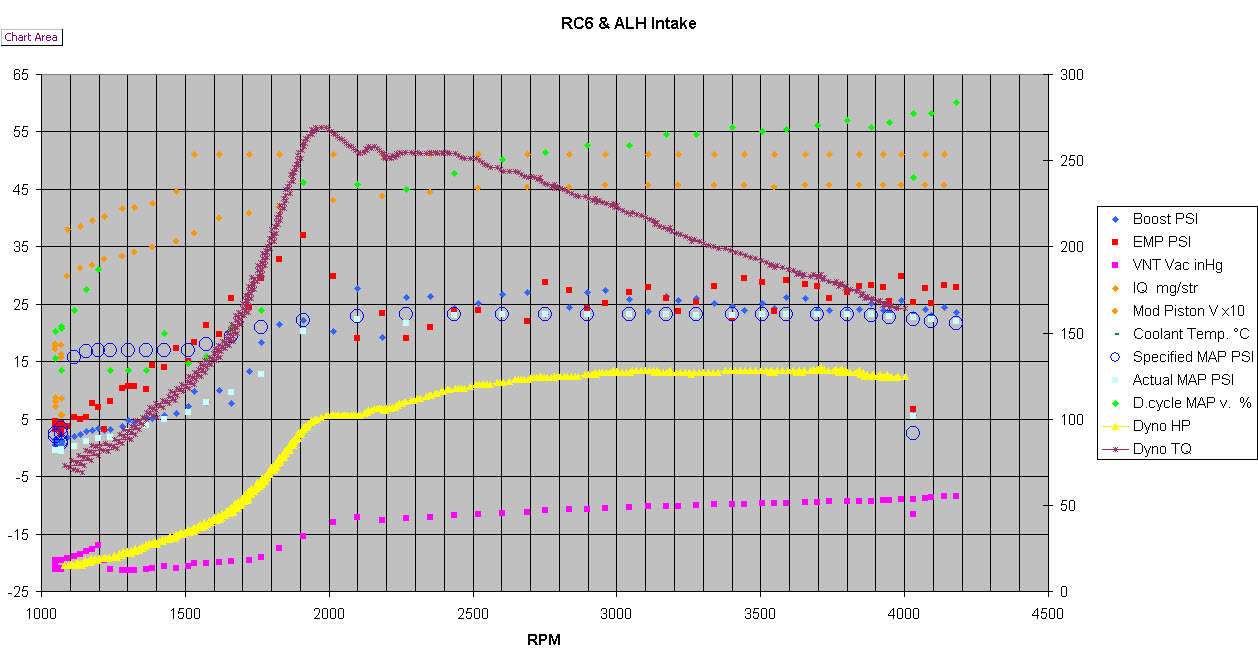 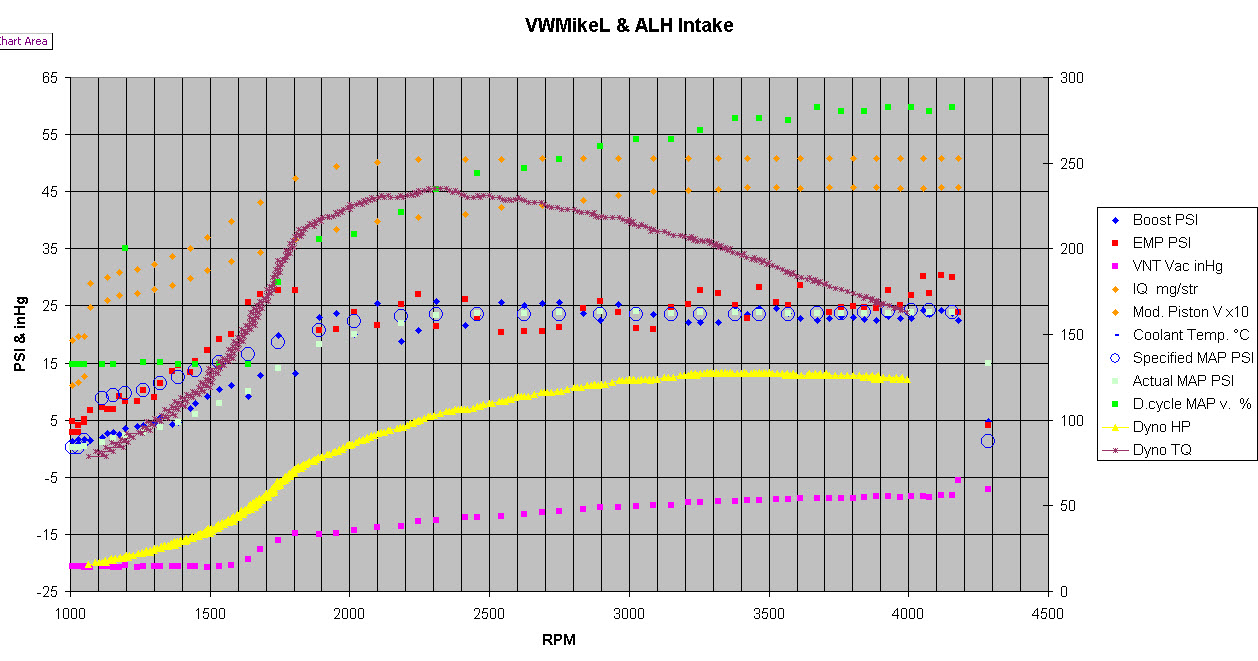 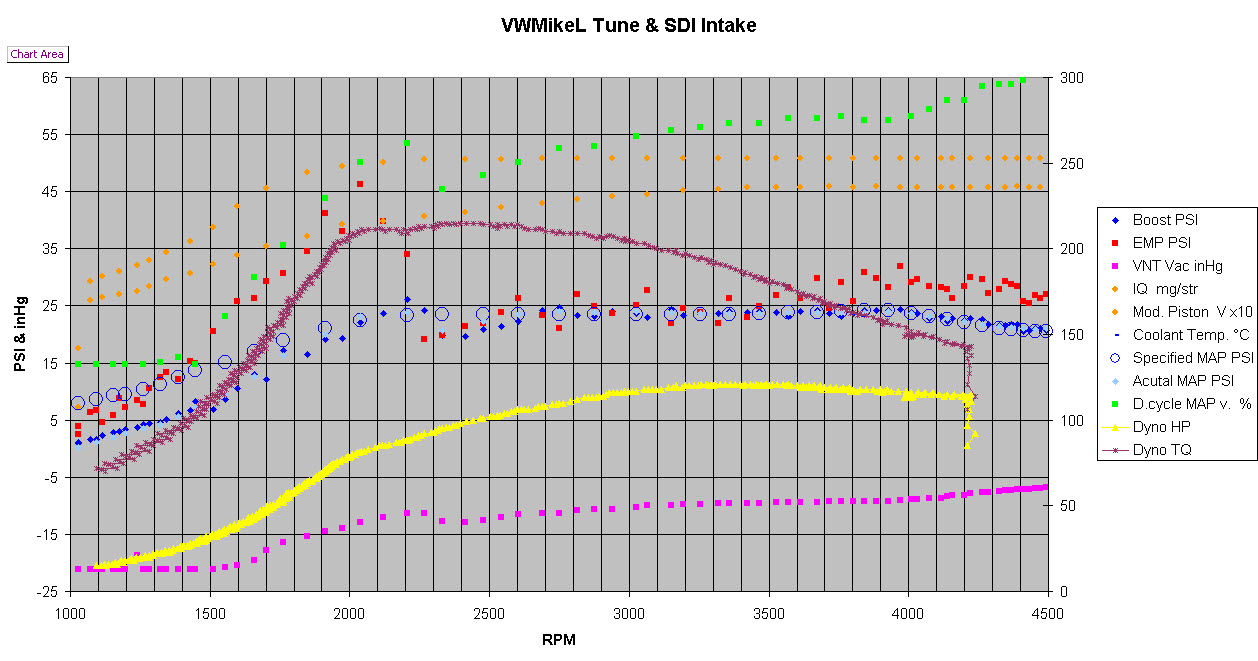 To small pics/low quality for me to actually see anything..
make them bigger?

I would like to get some files from you. and would also love to see a 2.0l pd passat chart done. And the above statement is true too... Great work thus far!

If I am making out your car setup I would say you need to open up the intake a bit to reduce the required EMPS to turn the same amount of boost. I dont know if the rc tune pulls back boost at 3500 rpm but I would think Jeff runs it right up until he cuts things out around 4600 for that tune. It looks like at 3k and above you are breathing through a straw.

Very nice data. I wish I was closer I would have you do my cars too...

I'll make some better pictures and replace the ones in the first post soon. They were just screen shots so they lack clarity.

Looks like the RC 6 gave you 3 more PSI of boost and 8-9 PSI more EMP compared to the RC4 (peak numbers)While the stock tune + vnt 15 has EMP and IMP essentially matched. So we can see that adding boost beyond stock does really sent the EMP up almost regardless of turbo.

just remember to read measurement before the CAT (if it's present obivously)
Last edited: Jun 15, 2009

just remember to read measurement before the CAT (if it's present obivously)
Click to expand...

I think there's no point in measuring pressures after turbo, if you are trying to get EMPs. Exhaust pipe pressure (=after turbo) is a different thing and it should be ~0,1-0,2bar max without cat.

Wow. Awesome measurements and thanks for sharing.

But I can't glean any information from the data pics in post #1, without a serious migraine. I would emplore you to reconfigure those plots so they are more useable. Do we really need all that data on there also? Why include N75, intake filter box pressure, MAF, etc. Perhaps just focus on the IMP vs EMP with RPM and MAP data.

I think plotting in excel would help visually also.

Having post turbo pressure measurements would provide information to compare stock vs. 2.5" vs. 3" vs. >3".

Kriesel - I hear what you're saying, but one of the main things that many believe is a significant restriction is the first bend coming directly off of the turbo which would not be accounted for by measuring farther downstream. Plus, it would require drilling/tapping into whatever downpipe I was measuring. With the flange measurement, I can slip it in on any downpipe relatively easily without having to drill any holes.

Shadowmaker - EMP's are recorded as well (red trace). The OEM DP & Cat had ~0.2 Bar back pressure

Shizzler - I'll see about re-formatting the data in post #1 and see if I can make the pictures a bit bigger. I put all the data on one plot basically because I could. (I actually deleted a handfull of channels that were not providing much useful data already)

Dieseleux - If you're measuring after the turbo, you have a probem

TDIinTexas - Exactly. I'll repeat my 3" dp with the proper measurement flange. That should provide both ends of the spectrum pressure wise (save for your 3" DP with the long sweeping bend - but you have more length as well )

I'll try and get cruising DP pressure measurements as well to compare from an efficiency viewpoint (I'm not expecting much difference at low load/low RPM's, but that's why I'm doing this in the first place - so we can know and stop guessing)

Now if you could only test the stock DP without the cat
I'm surprised that the EMP's were similar between the 3" and stock w cat... I thought it would take more pressure!

F_U_B, you are doing us a great service with the wealth of information from the logging that you've performed. This makes me interested to particularly see the EMP/boost pressure relationship of some of the claims being posted about boost>=EMP at high RPM.

TDIMeister - Thanks for the kind words.

I've got more to do - just lack the time to do it...Might have some time this weekend, but otherwise it'll probably be August before I can get back to it.

If you've got something that you'd like to see or you'd like me to try - let me know. I've got higher pressure sensors and would like to be able to take cylinder pressure measurements as well, but 0.001 second min time between data points gives 6 crank degrees between data points @ 1000 RPM, 12 degrees @ 2000 RPM, 18 degrees @ 3000 RPM, etc so not really worth the bother.

Picture Sizes - I figured out how to re-size the pictures so they're easier to read.

Here's a sampling - what size do you all want? I hate side/side scrolling, but will put up with it for the sake of being able to read the data. 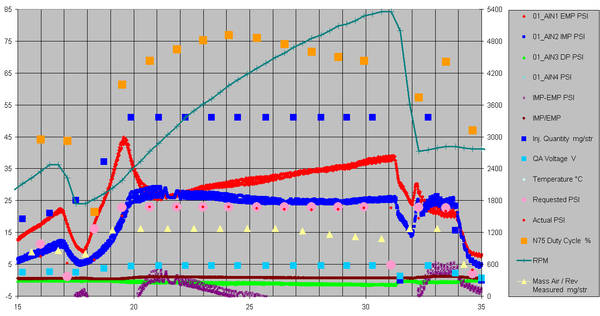 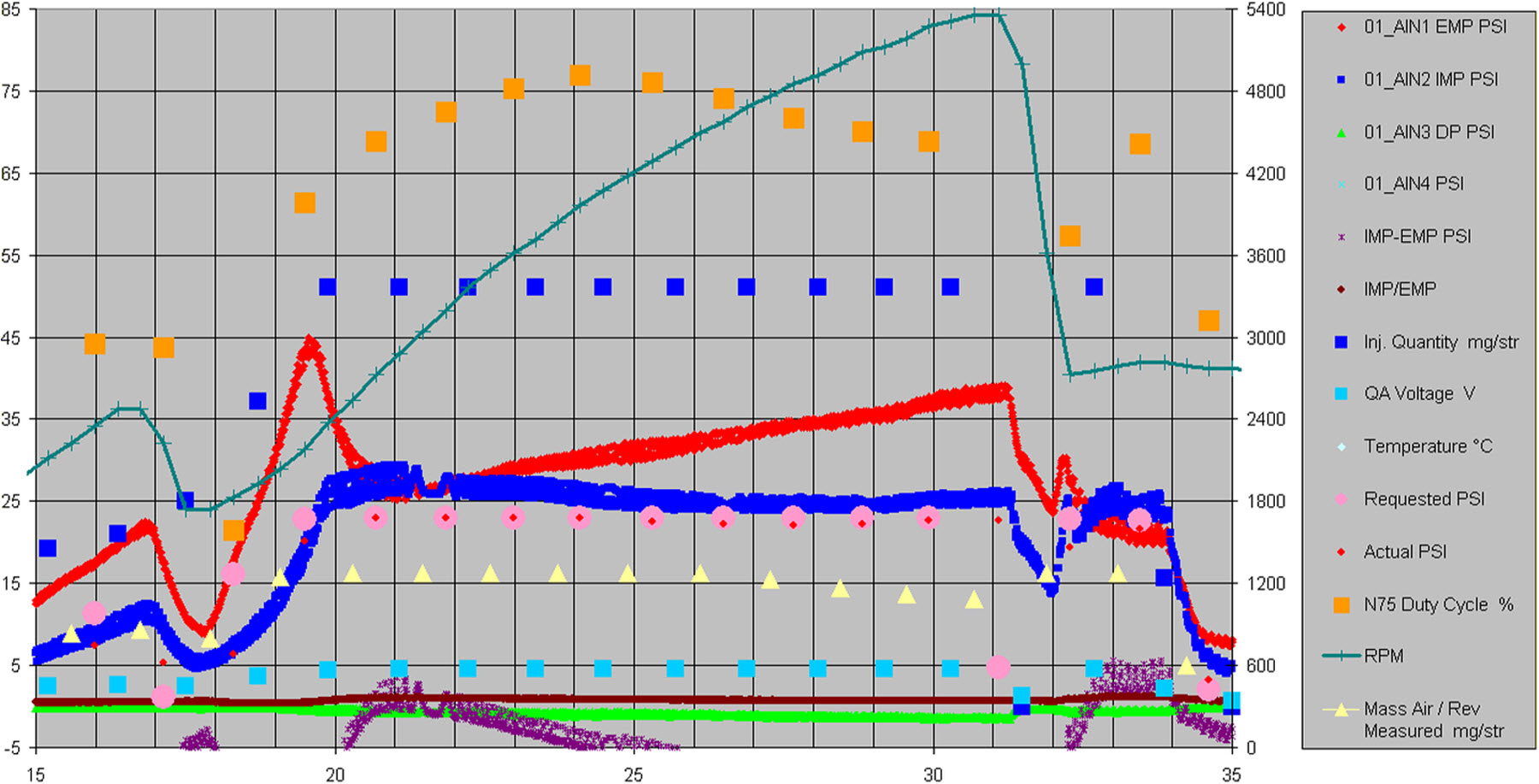