After more than 400,000 miles on my '98 Jetta, the metal hoses to the EGR cooler finally cracked beyond repair. I removed them and blocked off the exhaust and the intake manifold ports with little plates of sheet metal, using the gaskets that were already there. I used VAG-COM to set channel 3 (EGR) to 33768. That's ok because I, uhhh, always drive my car off road.

I obtained a vacuum switch, in my case an MPL 500 series, which might be obsolete. It really doesn't matter much what you use, as long as the contacts close when the vacuum that used to open the EGR valve is applied to its port. World Magnetics and Air Logic make similar switches, and you might find an automotive switch that would do the job. In any case, it shouldn't cost more than about $20 but it probably will.

I connected the switch in series with a 1000 ohm resistor between the MAF output signal and ground. Those connections are on the 6-pin connector at the MAF, but I don't remember which specific pins. If anybody has the service manual in front of him, maybe fill that in. I removed the vacuum hose from the old EGR valve and connected it to the vacuum switch.

I chose 1000 ohms because it seemed reasonable. With the engine off, key on, closing the switch changed the output voltage of the MAF from about .28 volts to about .26, or about 10%. I don't know how much the air flow is supposed to change when the EGR valve opens, but I figured 10% wasn't too radical. I haven't checked the voltage with the engine running, but things should stay proportional.

In any case, the check engine light hasn't come back on in about a week of driving, in conditions that normally would have turned it on. If I figure out somehow that I need the voltage to drop more than 10% when the ECU says the EGR valve should be open, I can replace the 1000 ohm resistor with a smaller value.

Beauty! Really well thought out and implemented.
You should produce these! I'd buy one from you. Actually I'd buy 3 or 4 for all my tdi's. I do a lot of off roading too.

My car only sees offroad use as well, but this would be nice to get rid of the EGR flow code!
Last edited: Sep 25, 2014

My car is currently being used off-road too, for the past month or so.
P1403 is the off-road fault code.

I know of 2 other AHU's that will soon be used off-road also.

Great project you did !
Will look into the other off-road pieces to complete the conversion.
Thanks !
A

I am just thinking out loud here, but it may be possible to simplify that arrangement. If instead of a vacuum operated switch, you connected a relay in place of the N18, could it switch the resistor when required?
J

Alchemist said:
I am just thinking out loud here, but it may be possible to simplify that arrangement. If instead of a vacuum operated switch, you connected a relay in place of the N18, could it switch the resistor when required?
Click to expand...

Yes, you could use a relay in place of N18, but I think it might toggle on and off too fast. I suspect that a pulse train modulates the opening of the valve, and the period of that pulse train might be too fast to actually close the relay contacts. I thought about using a "DC" solid state relay (basically a field effect transistor), but I had the vacuum switch handy and it's smaller, and I didn't have to change the wiring to N18, only to the connector on the MAF.
Incidentally, the switch and resistor are across pins 5 and 6 of the connector (brown and brown/red, respectively)
J

Both can be ordered on line.
J

Still no 1403 code! I connected VAG-COM, and drove it while logging MAF and EGR%. It's kind of hard to tell what's going on when you're shifting and changing engine speeds, but I think I've captured a segment with fairly steady throttle and you can see the effect of EGR cycling.

The yellow line (actual MAF) is cycling out of phase with the green line (EGR%), which seems to be successfully tricking the engine controller into thinking that the air flow through the MAF sensor is decreasing when EGR valve is turning on.
S

Outstanding! Great stuff. Thanks for sharing this.

You might want to size your graph down a bit so folks on small screens (laptop) don't have to scroll left and right.

Is this the general idea with the wiring of the vacuum switch? Just want to make sure I'm conceptualizing it right before I make it for real. 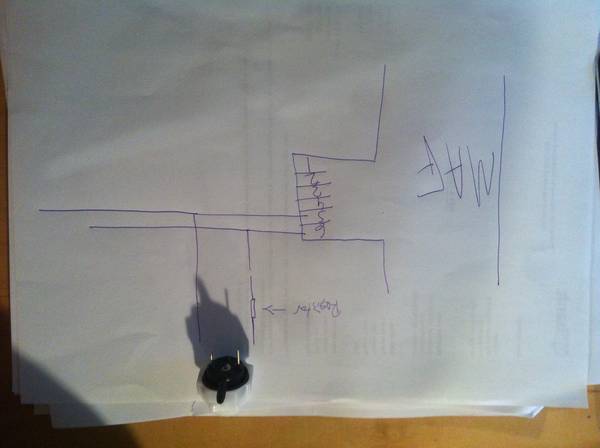 OP, I like what you did and good job.

But for almost the same money you can purchase the Willem Eprom programmer and a couple of 29F010 PLCC32 chips. Do some reading on Ecuconnections and disable the EGR via S/W. If you decide later to tune your car, you have the equipment.

That's it, annieneff. Pins 5 and 6 are on the same end of the connector, brown and brown/red, respectively. Doesn't matter which one has the resistor and which one has the switch. (Obvious to most, but maybe not to everybody.) I'm still free of the annoying 1403.
J

Thanks, vr6_idaho. I guess I didn't know where to look for the tools and code to program the ECU. Since I already had a free vacuum switch, resistor, and connectors, my cost was zero. I will check out Ecuconnections and see what else I might do. Normally I keep my cars stock, but as the Mighty Jetta gets on in years, I've made some exceptions.

Thinking of trying this setup to beat that annoying code. Has anyone yet tried using the solid state relay in place of the N18? Or any other variations of Jeffmon's trick?
J

Make sure you "tee" the resistor and relay into the wires on the MAF connector. Don't disconnect them, just remove some insulation from the wires and connect the resistor and relay terminals across the wires. It doesn't matter if the resistor goes on pin 1 of the relay or on pin 2, you just need the two components in series.
Polarity matters. If you use a different solid state relay, make sure the wires that go to the plus terminals are right. If you use an electromechanical relay, the output polarity won't matter, but sometimes there's a diode on the input (coil) which would make input polarity matter. I'm still not sure if the electromechanical relay would switch fast enough.
Please post a reply if you try it and it works.

Definitely watching this. I'll need to do this at some point.

I ordered a couple of those SSRs from Amazon today, now looking for the resistor and we'll see how it goes. I'm not going to let the new TDIs have all the fun! tee hee.

I too ordered one of the SSRs. Have it sitting on my desk right now, also waiting to find a resistor. I'm eager to see how your install goes - I'm eager to get rid of the CEL.

TDI
Only the B4V left

Watching with interest. While all my cars and most under my wing have the EGR tuned out, several do not and I'd love to have a viable remedy.

If it were possible to actually burn out the CEL LED, I could do it. It's just something you accept and live with. Every year at inspection time, VCDS is right there on the front seat with the port cover off sitting less than a mile up the road from whatever inspection place can get it done. The car my engine was in before this one had the light too. It's like a part of the TDI life....if it were to go out, all kinds of alarms would be going off in my head, lol.

TDI
Only the B4V left

The one in the wife's B4 and my older brother's B4 both burned out and thus no longer work.

You guys tried this yet? I have everything I need sitting on my desk. Just need to determine which wires I need, as I'm not too familiar with their locations and colors.

Amazon says my SSRs will be here sometime next month, so as for me, No.

It'll probably show up sooner than that... They gave me the same turnaround and it arrived within 10 days.
Of course it's coming straight from Hong Kong, so who know what may happen.

Forgive my ignorance, but is this correct? If so, none of the wires (except maybe one) are color coded the same as what you have. Pins 5 and 6 on the MAF connector are the same color (brown/red) except different sizes. 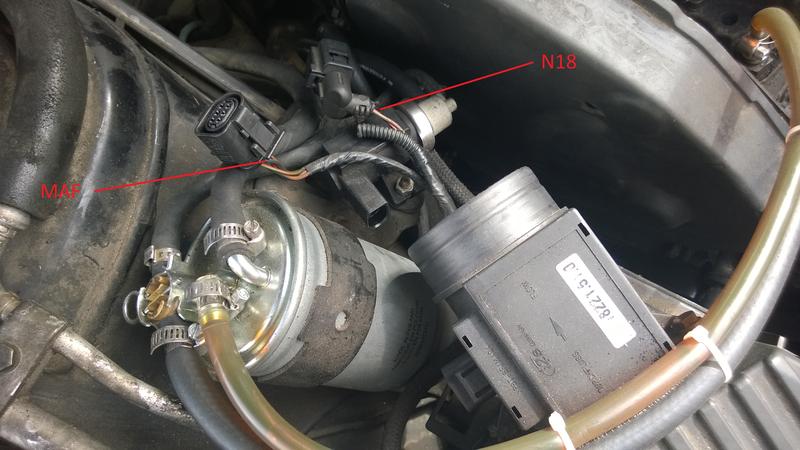 Got the parts, but it's super low on the B4 priority list, gotta put in a new block heater, your flange and get the water out and put coolant in since some nights it's close to freezing.

I tried using a Bosch-type 86/86 pin relay but it didn't work right. Does the vacuum solenoid absolutely HAVE to stay plugged in for this device to function properly? I disconnected the solenoid and inserted my relay wires straight into the harness. I heard the relay click on, then back off after about one second. Does the solenoid only get intermittent voltage for engaging and disengaging the vacuum? If so, then this type of Bosch relay definitely won't work. It will have to remain in its switched position until the polarity is reversed.

I also have my 1000 ohm resistor attached to the sensor wire on the MAF connector (the larger one), which I'm assuming should be correct.

Just ran into this issue today (unexpectedly - first time I've tried to get a TDI inspected in NY since the 2012 inspection changes) and tried to implement this fix with a 1k ohm resistor and a non-solid state relay. I have not logged EGR performance yet, but my baseline check of requested/actual MAF is as follows at idle and makes me wonder if 1k is always the right additional resistance to add across 5-6 on the MAF.

Intake is freshly cleaned including head ports (it was BAD), timing belt is new and timing is good, drivability is great. I just need the CEL to stay off.

I did not yet test without the relay in play not have I yet graphed but I will do so shortly. Wanted to get this posted. Soon will have more effort into this than a tune, and have a hacked MAF harness to show for it. Tried and failed to probe the plug with 24ga solid wire for a temp install. Oh well...

EDIT: I just did some idle logging and learned 2 things:
Presently, at idle I will have the EGR duty cycle at max (84%) for a while, and then it jumps to minimum (4%) - probably IAT or coolant temp related? At 84% it never seems to turn off the relay. I see ~435 at the MAF until EGR duty cycle drops, then I see 550.
I jumped the relay directly and see the same MAF values as when EGR duty cycle is at max.

It appears I either do not actually have a 1k ohm resistor, I have some resistance through my relay, or some other value is needed. I'll play with that tomorrow. My resistor came in a 2 pack so in addition to checking its value I can play with parallel/series of those two, and see if I can find any others laying about to test.
Last edited: Dec 5, 2015
You must log in or register to reply here.
Share:
Facebook Twitter Reddit Pinterest Tumblr WhatsApp Email Link
Top