this may dead end very quickly, but we shall see.... attempting to harness my long dormant programming skills from a past life. never used visual studio or have done much programming on windows. it was all on unix/linux with makefiles and c/c++ so this stuff is kinda confusing but hopefully i can get somewhere with it it took me a while before i could even get the original stuff to compile and run. might be getting in over my head but here we go! 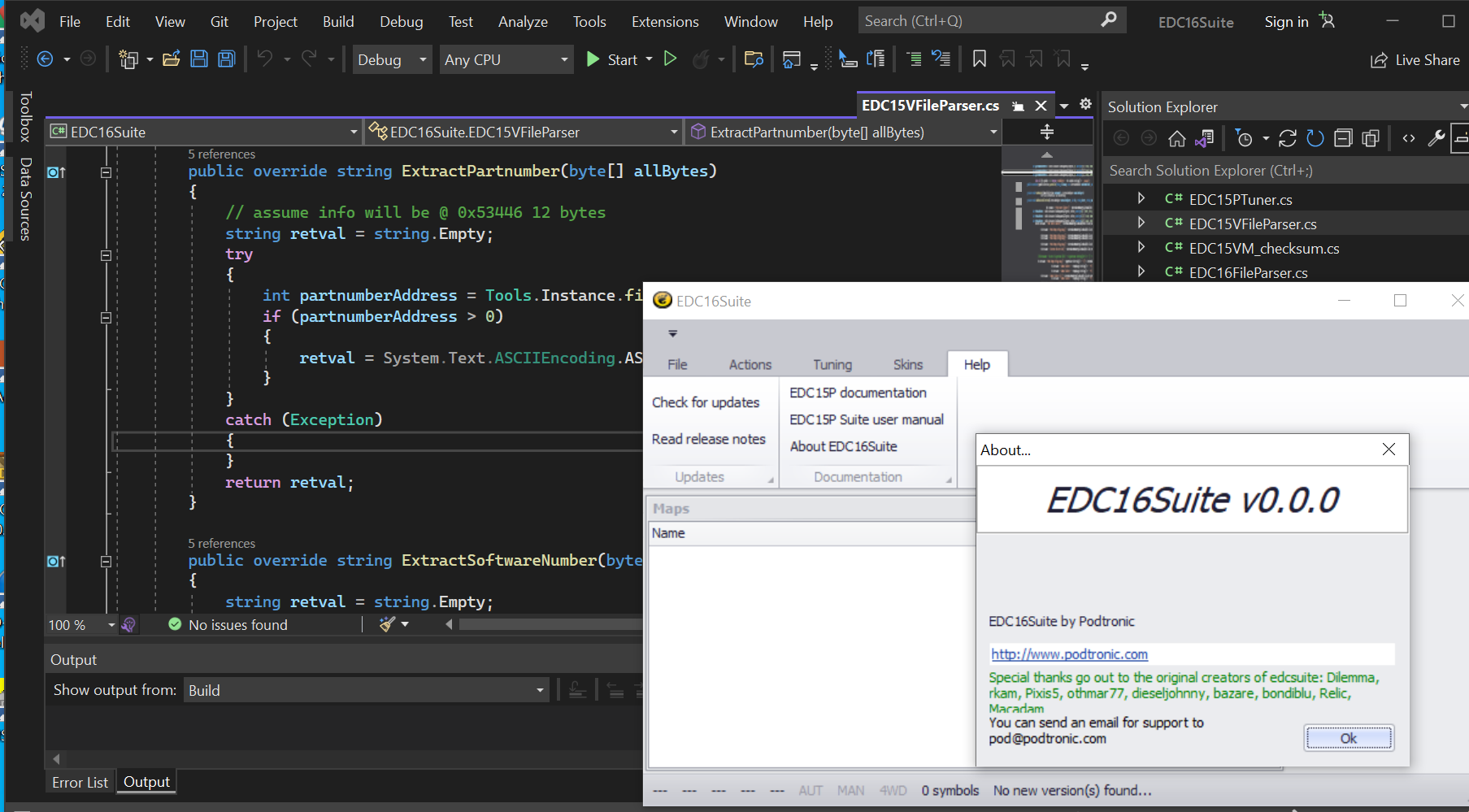 Good luck to you!

Should include edc17 suite while you are at it

It will by it's nature include it

if anyone happens to have any zip files of A2L files, that would help speed things along - please pm me. i got my hands on one for my wife's 2006 golf BEW, but i have yet not tried to source any others. US/north american edc15 and edc16 models would be most useful for my own testing purposes.

well i've really gone off the deep-end . my scope, intent and direction has changed quite a bit now that i've gotten my rusty programming brain warmed up again (20+ yrs the last time i did any serious c/c++ coding) and some things figured out about how the ecu binaries work.

i'm way down in the weeds *completely* re-writing it. if i'm correct about my understanding of all this, when i emerge, i will hopefully have a very powerful, and easily extensible, general purpose ecu binary editor that will initially work with msa15, edc15 and edc16. adding extensions for other ecus should involve fairly simple coding extensions to deal with some of the specifics... at the very least, i should be able to have something working that will allow me to modify and flash my own specific BEW ecu, and if not that, i will have gotten a pretty good handle on c# and visual studio

i appreciate wanting to be helpful, but to clarify - i'm not looking for tuned files - i am mostly looking for either A2L files for north american 1.9 PD TDI or damos files for north american msa15/edc15 ecus. i have enough now to get something started, but a damos file for an ALH stock ecu (BD is what i have) would be most helpful so i can figure out the file structure/addresses and test my program..... that is if i can ever get it to even compile again hahaha
I

Very nice work!
Is it also going to be opensource?

I might be able to dig up some A2L / OLS files

well i didn't update this thread as i have been insanely busy - working on it, tuning in general, and everything else in life.... but not too long after getting into it, i realized how horrendous the source code was. not to speak badly of the original creator - as it was quite an impressive feat to have created this himself - but as a programmer (or used to be at least), i'm rather perplexed and somewhat surprised that he was able to get working at all seeing what a bloated, convoluted, mess of unmanageable spaghetti code it is...

it took a while to get through it all and figure out how it all worked, partly due to my very rusty programmer-brain and learning the subtle differences between c# and c++. it was difficult to get to the point where i could see what i needed to do to adapt it to work with edc16. through the help of some others, i've also figured out more about the file structure of edc15-edc17, damos and a2l formats and the information stored in them. as i delved into it more, the scope of what i wanted to do vastly increased - i now want to create a much more general purpose ecu binary viewer/editor/manager. something that should work on at least all bosch ecus with the help of relatively simple coding extensions. so it's going to be designed to (hopefully) be easily extended to work with the subtleties of various ecu types, but initially focused on getting edc16 working. edc15 and edc17 should follow very quickly. i would then like to see it extended to work with bosch gasser ecus.

so, no offense intended to him - i'm very impressed he created this on his own and by releasing it as open source, has opened the doors for others like myself to learn from it. however, the source code is completely unmanageable, convoluted, bloated, poorly written, inefficient in all respects, difficult to read, illogical in many parts, essentially non-object oriented but written in c# - to do what i want, there's no other way other than to start from scratch, using his code as a guide now, mostly just for the gui interface and graphing parts. my gui creating skills were very rusty - not since college had i done any similar gui programming in c++.

i've thought about this a lot, but it's going to be FAR too much work for me to release as open source for free, i believe. maybe if i were independently wealthy i would, but i'm far from that, lol.. the volume of work and amount of coding is simply going to be too much. as much as i believe in open source, i just don't think i can afford to do that in this situation.

i also learned a little bit of history along the way - the path i've ended up on sounds almost exactly the same as the path DarkAngelBOV took - who now has created edc-suite.net, which up until recently i didn't even know existed. it seemss like he had wanted to improve the original source code to do more, but soon realized it was impossible and had to be re-written from scratch, and that it was going to be way too much work to release open source.

i don't have any experience with copy protection in software and only a basic idea of how to do it, but i'm sure i will figure something out.
i what i would probably do, assuming i can get it working, is provide a few different versions.
1) free demo version that lets you do everything except save out, similar to winols demo
2) cheaper limited versions
3) full version

anyone who can significantly help me with a2l/damos file acquisition (or any other useful aspects, since there are still a number of things i need to figure out) would certainly get a free full version, and could get test versions to play with as soon as i get something that will compile and actually run. right now, i'm still having trouble getting files for the most common north american tdi's. i may have them already, but i haven't had the time to wade through all the files yet..

i'm interested in how this project will work out, wishing you the best of luck!

i'm pretty confident now i have the capability to create the software that i want, i'm just a little unsure yet how much time it will take. but if i get it working, i think it would be most similar to the new non-opensource edc-suite (so similar to free edcsuite, but with a whole lot more functionality). i do not see that they provide a demo, so i can't really say for sure. i've tried to get used to the winols (demo at least), but i still find it to be incredibly non-intuitive, difficult to use, and overly-complicated. being as such, i haven't yet fully figured out if what i'm working on will allow more functionality than either of the above, but i think it will. and it will most certainly be easier to use - both for beginners and experts - but also hopefully have no limitations.

one important piece of functionality that mine will provide (without much programming effort, as it's built into the design), is the ability to create/save/edit your own local "Damos" or "a2l" files. if you don't have one to import into the program for a particular ecu, it will auto-detect the maps best it can. you will then be able to name a map address and identify and edit all the map properties - name, type (2d, 3d, single value, etc), description, default size, axis values and units/description, and these changes will be persistent. it will effectively create a stub a2l file that will be associated with that particular ecu. so next time you load up that ecu, it will use that to identify whatever maps you have saved. you can then share, sell, or do whatever with this file as you wish. send it to your friends and they will then be able to load up that ecu with all the saved map information. people could then crowd-source a2files, which would be incredibly helpful to everyone..

i have a huge list of functionality i was going to post up somewhere at some point, but other key points:
1) ability to easily and efficiently work with multiple ecu's at once - free edcsuite is very difficult to use when working with multiple files and versions of files. winols too, i find. much better window control for dealing with multiple open maps and ecus and switching between them.
2) improved map searching - search by map names, descriptions, axis values, units or map data. you can save your search queries and thus effectively create various map lists that you can than easily switch between (turbo stuff, fuel stuff, DTC "codeblocks", single values, etc), rather than always wading through one long list of maps and crap
3) copy entire maps included axis with a single click. you'll be able to quickly and easily select 1 or more maps, copy, and paste into a different file, even between ecu types as long as the map is compatible (size/units are the same etc)
3) full undo/redo functionality just like everyone is used to in a standard text editor. if you try to undo a change that was done on a map other than the currently viewing map, the old map will pop-up into view with the change undone and continue from there
4) countless other improvements....

in short, i'm going to be aiming for the perfect balance of complete functionality yet easy enough to use for a beginner to learn with.
I

Sounds quite nice, but very time consuming.
I wish you the best of luck and I hope it will be a usefull tool!

yes... very time consuming. won't really be as much code as one may think, but getting the program design right so that is efficient, but modular and extensible, and all the gui code, gets complicated. the end result will be much simpler than all the work to get there, in part due to being a bit rusty with my programming, but it's been coming back...
You must log in or register to reply here.
Share:
Facebook Twitter Reddit Pinterest Tumblr WhatsApp Email Link
Top