Yo,
I've got a 93 GMC 3500HD with a 6.5 turbo D engine. We had the truck donated to us (austinbiofuels) with two cracked heads and a blocked radiator. We replaced the radiator and put a long block in it. THE DAY we got it running it had an intermittent popping sound coming from the right cylinder bank. The sound is RPM dependant and an increase in smoke is observed when the sound is heard. I thought it was the vacuum pump so I just ignored it. One day I got sick of it so I took the vacuum pump off (it was for trailer brakes) Still popping. Decided it was an exhaust leak. come to find out it is actually sticking intake valve. This was verified by removing the upper intake manifold and jamming a gloved hand into the #2 port; effectively eliminating the noise (which is significantly more pronounced with the upper intake removed). Compression test showed good compression but again, it is an intermittent problem.

So it was concluded that we were experiencing a sticking hydraulic lifter.
The cylinder head was removed and 2 pushrods and 2 lifters were replaced (lifters were $48 bucks a pop, no pun intended).

Problem persists, though not as regular or for as long a duration per event. It will pop for anywhere between 25 seconds and 1 minute usually following high speeds (>65mph) but sometimes for 10-12 seconds upon start up.
We've got good oil pressure, no overheating isuues, no excessive wear in the valve train of the right bank.

The sound is very embarassing especially at stop lights with our "Powered by Biodiesel" stickers all over the truck (the problem is not related to the fuel). The warranty on the engine expired the day after we got the head back on. and the engine supplier (South Houston Engine) has told us that they are shipping the lifters to their lifter supplier, but we have not heard from them in 1.5 months or so.

Have you guys got any ideas?

Not much action in the Non-vw diesel section I see.

I guess I'll add that the head was taken to a machine shop and all the valves/guides/seats checked out OK on #2.

there is a small crack between the valves but it is very small. most likely unrelated.

Are you sure it's still #2? Maybe a new problem has popped up, or it's just a different cylinder? I don't know anything about these motors, but it seems you've checked all the right bits. I'd just start at the begining and check everything all over.

Maybe the valve just needs to be replaced--cold it's straight and hot it's warped? Or maybe the guide is too tight? Wouldn't a sticky valve run the risk of touching the piston?
R

Same cylinder. There is absolutely no way that I will be replacing everything again. I've got about $300 and 10hrs in this problem already (that's longer than the original motor swap took).

Not related, but how is Little Bup doing? Still being a temporary donor?
R

Mini bup is still OOC. awaiting the components of the 1.6TD block and head.

although, now I'm thinking that the red golf might get the turbo motor (or an ALH )


Problem is when you take off the intake maifold you can feel/hear the bup from the air coming out the intake past the intake valve on that cylinder. All parts have been replace, good oil pressure and no other cylinders show this problem. Wow.

How does the cam shaft look? What type of wear? Did you measure or eyeball? I dont know these engines so I couldnt tell you what the specs would be but what you want to know is the measurement at the skinniest/roundest part and the measurement at the point with a micrometer. You could use the rest of the lobes to check each other, variances would show problems.

Thats the best SWAG I got for you.
R

Yep you got it. When you take off the upper intake, it sounds like an automatic weapon going off next to your head (then you stick your hand in the port and the noise stops completely). I held a rag up to the port on that cyl. to see if it would kick the rag out when it popped but it was hard to tell; the rag was just sort of dancing all over the place.

I haven't looked at the cam because I can't really get to it without a major tear down.

After I drive this truck off of a cliff, I'll pull the cam and check it out.

Dosen't really matter now though. We got a new beast: 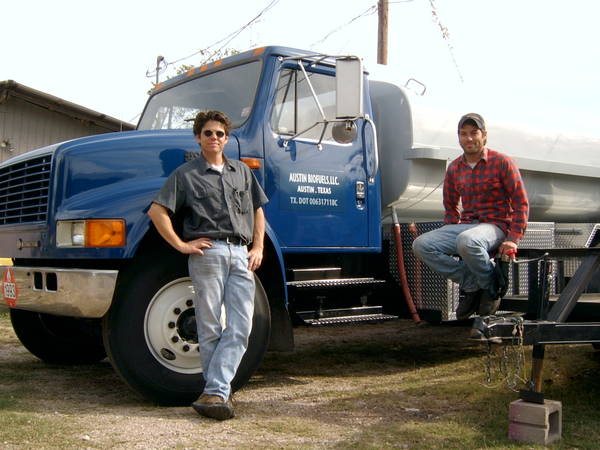 Its the only thing I could think of but its, well, if its intermittent it wouldnt be that.

That is a beast!

Nice to see you dressed up for the pic Robby.

Dang, that thing has a HUGE fuel tank. Must have really good range.
R

We got 10.6 MPG on our best tank coming back from Indiana. It gets weird when you start transporting fuel across state lines with a TX DOT number. never got hassled at the weigh stations though. You wouldn't believe how much of a PITA it is to get a Class A CDL with HazMat/tanker/airbrakes when you don't actually own a truck

bam_bam_dip said:
Nice to see you dressed up for the pic Robby.
Click to expand...

Its alright, the ladies know I look good no matter what

runonbeer said:
She's a blast to drive though...
Click to expand...

Those older style Internationals are rock solid. With decent air seats, they ain't bad. Made a trip in one one night to McAllen and back. 650 miles in 15 hrs. Would have made better time, but the road gets kinda blurry between 2-6 am south of San Antone, without even a radio station to listen to. I did find every single cup O joe along the way.

Ok, your truck has officially kept me up at night. I fell asleep last night thinking about. I usaually do with problems that dont present obvious answers.

It couldnt be my last idea of the camshaft because if it was wear on the lobe that would make the lift and durration less not more. You would need more lift or durration to get the back blast. Since no carbon could build up on the lobe thats offically out.

Now I got to think somemore for possibilities. Nuts to you and your engine for making me think so hard. Watch it be something very simple that we have overlooked, then I get to feel stupid too.
You must log in or register to reply here.
Share:
Facebook Twitter Reddit Pinterest Tumblr WhatsApp Email Link
Top