I am looking for someone who has given a lot to the TDIClub community, goes out of their way to help others, and is not in it for any profit. If you would like to nominate someone, please post (or email me) a little bit about the person and what they have done for the club by July 15th, 2006. I will take the suggestions and make the announcement of this years winner at TDIFest 2006.

I hereby nominate MoGolf (Glenn) - although he does obtain work through this club, he has always responded to my many troubles - all for no profit. In the most recent example, the dealer re-used some bolts that should not have been used. Glenn then responded several times with things to check for and most importantly posted the pages right from the repair manual that pointed out the fact that the bolts should have been replaced. The dealer was then forced to admit they re-used the bolts and they had to eat the repair costs (of which at this moment is still happening as tomorrow (7/5/2006), they have to replace every "always replace" mounting bolt on the engine).

Glen also came to a rochester gtg in May and gave free demo's of VAG-COM to all of us and pointed out to me in particular that the timing needed work. He also helped with a free ventechtomy.

Here's the thread I was referring to: http://forums.tdiclub.com/showthread.php?t=143187

I also nominate Glen. Well, he and Brian (Oilhammer). The toofcapades defintally merrit them for it.

I agree with your choice, if we all had our way he would be a perennial recipient, however Fred has criteria that has to be followed.

I know Glenn has assisted and helped me numerous times. He has always been there to answer the thousands of questions that we all have. Patience is a virtue and Glenn has bucket loads of it.
O

Rookie of the Year: bhtooefr!

Glen has helped me out, also. I agree that he is extremely kind and helpful. Jeff Robertson has rescued a friend of ours stranded on I 83 in PA - 500 miles from home, Dan Simoes has also rescued the same friend (I know, he's an unlucky sort... ) when he was stranded in NY with a broken shock.

Herm has been extremely helpful also - taking a call from a guy at 2am (who had to be to work @6am!) when he lost his timing belt tensioner bolt in the dirt during a TB job.

I'd love to nominate them all (they ALL deserve it), but all these guys have one thing in common...they are also 'in the business', and therefore (I believe) are unfortunately ineligible for the BUG*PWR award.

Aaah, but you see Glen only does his wrenching on the side. not as a way to support himself. he has a regular 9-5 (or is it midnight-2am or 9-9? tis all over the map for sure)

I also nominate him for all the help and advise he has given me and for all the assistance he provides to others at GTGs. all or mostly Gratis.

MoGolf definately gets my vote.

TDIParts.com was a side job for danix, also...

More comments and questions about my nomination

I saw all the postings here about whether MoGolf was eligible or not. I think it comes down to one point - did Bug*Pwr himself ever work on anyone's car for a fee?

Or ask Bug's family to decide - I agree it's a tough call. All I know is he never has charged me for anything and actually REFUSED a payment when I offered to send him one. Now if THAT doesn't qualify him, I don't know what will (he told me to send a donation to the club instead).

Also, I don't know if MoGolf is actually making a profit at all or is just covering costs of travel plus money to cover depreciation on his car for the # of miles. If the "fee" only covers those two points, then it's not for profit.
Last edited: Jul 7, 2006
M

There is no way Glen could ever "profit" monetarily from any token payments he may have received, not after all he's done gratis for the TDI community. His profit has gotta be spiritual and I think that is what this award is intended to be about. Glen is the first person I thought of when I read this thread and I think Gary would vote for him too.
Oh, and by the way, thanks again Glen!

If you guys DON'T give it to Glen because he charges for timing belts, there's a real problem with you people.

If it weren't for him (and others, yes... see my sig for the partial list) volunteering his time (oh, wait a minute, isn't that the point of this award?), my 85 Jetta would still be sitting in the driveway, awaiting a reringing, a clutch, and with a bunch of issues that I wouldn't have known about waiting around the corner.

Thanks to him, it became a reliable car. (Unfortunately, it got crunched on Friday, so I bought a Civic to temporarily replace it, but it WILL LIVE ON.)

Also, I've seen many a case where he helped someone out big time on the forums...

Look at the names who have received this award in the past..........
Not one of them has ever receive 1 dime for doing work on anyones car.....actually drivebiwire started charging for his work after he received this award........These guys still do this all the time.
I agree with you about Glen his is a wonderful person and I would drive 400 miles to have him work on my car Herm too......
He just doesn't meet the criteria Fred set for being elgible for this award.

tomo366 said:
He just doesn't meet the criteria Fred set for being elgible for this award.
Click to expand...

VW Derf said:
I am looking for someone who has given a lot to the TDIClub community, goes out of their way to help others, and is not in it for any profit.
Click to expand...

Someone who has given a lot to the TDIClub community? CHECK.

Goes out of their way to help others? CHECK.

Come on guys. I'm just asking for nominations and the criteria is at the top. Lets not bicker about who is and isn't eligible, just send in your nominations and I'll use these submission as part of my decision.
Every year this is a tough thing to decided on as there are a LOT of great and deserving people out there who really make TDIClub what it is and are deserving of recognition.

A good person deserving of a nomination. Oldpoopie. While he was up in North Jersey he was the Go To Member in the Tri State area. NY/NJ/PA. Great person to go to for TBs, Friendly and and Willing to travel to help out. He is saldy missed in this area since his move out west.

These nominations in the past have been in a private format, using PM's and emails to Fred.

I suggest in the interest of keeping this in the spirit that it was meant to be, we return to that format.

This is not something we should be fighting about...

Guys, I've heard one of our richest contributors won this prestigious award!

Who won? I'm guessing that there's a thread on this? I'm not finding it...

A heart felt congratulations Tomo! A most deserving bloke !

Thanks to the Club!!
I think this was the first time in my Life I was speechless!!
I was and am still overwhelmed by this honor!! I absolutely love the TDI scene and I love to be of assistance when I can help!
I have never had a standing Ovation before thanks again!!

We heard there was 23 pounds of something on the floor in the front. We were just looking for that!

tomo366 said:
Thanks to the Club!!
I think this was the first time in my Life I was speechless!!
I was and am still overwhelmed by this honor!! I absolutely love the TDI scene and I love to be of assistance when I can help!
I have never had a standing Ovation before thanks again!!
Click to expand...

Congrats Tom. Wish i could have been there to congrats in person.

And very well deserved! Congratulations Tom. Sure wish I was there to see you speachless.


....and you deserve many more for all the contributions you've generously made throughout the year! 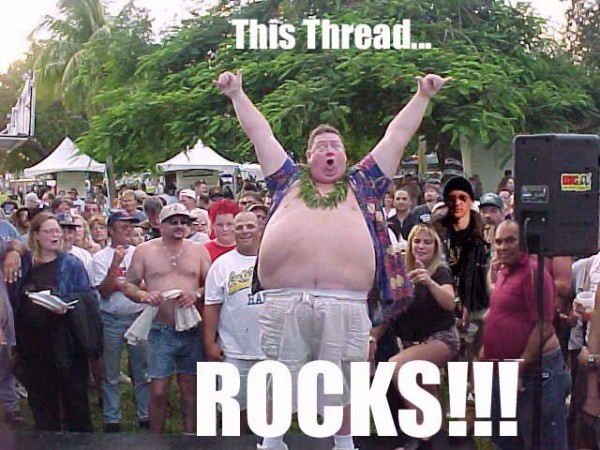