I have a couple of questions on mounts I am hoping someone can give me some guidance on...I just finished up swapping a BHW into my 01 allroad. There is fairly significant vibration at idle and then as you come into a stop.

I purchased new OEM mounts but just realized there are left and right. I had assumed they were the same until after I got the engine and noticed that one had the grey rubber protective sleeve. Would that be a cause for vibration?

I had to modify the front clip for the intercooler pipe but as you can see in the pic my snub mount is not within the space on the engine. Is that okay or could that be an issue? 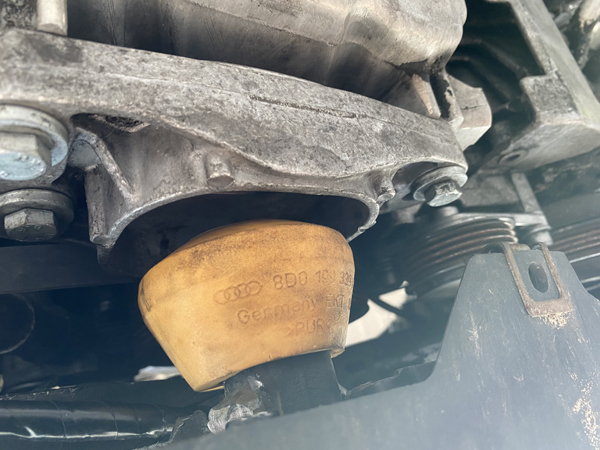 Thanks...I will work on that snub mount. I decided this morning to swap back in the transmission mounts that originally came with the allroad (2001) and it may a significant difference. I had been running Sterns. If the old mounts made that big of a differenct, I am hoping a brand new set will help even more. When I get the new mounts, I will probably swap the engine mounts for the protective sleeve or least move the sleeve over.
H

Hello TDI brain collective.
I am planning to do a 6-speed manual swap with a used crank from Franz ('05 BHW). I have reviewed this and other forums. I have not seen any advice on crank removal and installation.
Questions I have are:

QuickTD said:
You probably won't see much info on crank swaps as there are far cheaper and easier ways to get around the pilot bearing problem, Most have been addressed here. Check my user picture album for another.

In any case, to swap the crank you will need at minimum all crank main and rod bolts, crank pulley bolt and front and rear crank seals. I would not re-use any type of balancer, geared or chained, they are all a liability so a delete kit would be required. I would replace all bearings as well, since they have worn to fit the crank you are removing.

Cam wear is pretty obvious. The lobes start off with a chamfer all around. As the cam wears the chamfer will begin to disappear at the lobe tips, pretty much always just the exhaust lobes. If the chamfer is gone on more than just the tip of the lobe, the wear progresses fairly quickly. In the advanced stages, the lobes will wear a hole in the lifter top, the lifter will collapse and you will hear the distinctive "bupping" noise. Inspection is easiest when the T-belt is still on, roll the engine over via the crank bolt and check all the exhaust cam lobes.
Click to expand...

Thanks for the cam & crank info. Those things to replace make sense, though I will stay with my geared balancer. I do agree that there are cheaper and easier ways to get around the pilot bearing issues but I do not believe they are as good as swapping crank, that is why I am planning to do this. I do not like the advice to only seat the bearing part way, I do not have a mill to make my own bearing holder, nor do I like dealing with all the conflicting clutch information - no one has consensus, so how does one decide...
Z

If the crank doesn't come with the gear to drive the balance shaft you will need that also. Mains torque is 120 nm plus 1/4 turn. I don't offhand know rods.

Seems to me you are looking for a problem that doesn't exist. Many swaps have successfully been done with the BHW crank. Some clutches don't even use a pilot bearing. I just did one on a Toyota, and I was surprised. No pilot bearing.

Interesting. I miss my B5 wagon. Wish I could find a good clean one up here, they're all rotten now.
R

Uberhare said:
Interesting. I miss my B5 wagon. Wish I could find a good clean one up here, they're all rotten now.
Click to expand...

I can get you one with a blown automagic easily for 1500 us. they dont rust here is south carolina bc we don't salt the roads.
8

they're like 500 here in the midwest. i've seen several in the last few years. I bought one in milwaukee last year for 500 with blown auto.

I would love to find a rust free TDI wagon and have it shipped up here. I've given up on a rust belt cars but really miss my TDI 6 speed. I have the old one for parts with the swap still.....Couldn't bring myself to part it out yet.
Z

I have one, bought for the engine. Black. Big dent in the hood and a ripple in the left front fender. 17 in. wheels. No steering wheel buttons. The rest is in pretty nice shape. Sell cheap. Washington.
R

Uberhare said:
Let me know what is missing from the list & I'll update it.
Click to expand...

could you post a pic of the locations and part numbers of the mounting bolts and where they go. It would be uber conveinent. I have a buggered up install I need to fix. TIA

Wanted to update this thread...

For clutch selection, I went with the DMF/sachs SRE combo, obtained through Darkside: 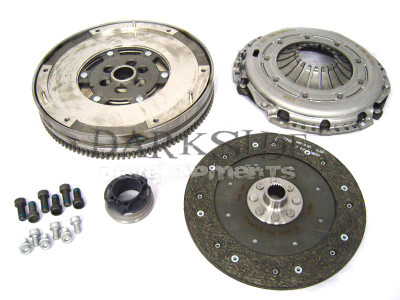 I now have 300,000km on the swap, and the transmission continues to shift just fine.

However, the DMF was starting to make the "death rattle" more common on the BRM cars (rattle at idle, clanking, changes or goes away under load)

So, with a failing DMF, and 300,000km, should I order just the DMF, or another whole clutch kit? I decided to get the DMF, and hope that the clutch was/is still servicable.

Upon disassembly, the DMF was shot - the center pivot bushing had roughly 1mm of play, where there isn't supposed to be any...

The clutch has 8.4mm thickness new according to Sachs Race Engineering's website, and mine currently has 8.0 mm of thickness - not bad for 300k km, though much of it was highway with little shifting.

Going by depth to the rivets, I had used up only 15% of the lining thickness, so I decided to reinstall the clutch on the new DMF, along with a new release bearing. WIth the DMF replacement finished this evening, the car idles much smoother, and the rattle/clanking is now gone.

All in all, I would still go with this swap using this clutch.

I guess teaching my teenager how to drive stick on this car certainly didn't help matters...

Out of curiosity, is that a 228mm or 240mm diameter setup? Did you use a spacer between the engine and trans?