My father has a 02 Jetta tdi. The fuse box that sits on the battery had caught fire. He ordered the new fuse box and fuses and put them in. The car still won't start. I told him to check all the fuses and relays in the car. Any other ideas or directions we could go in to get her back up and purring?

I'd suggest step one is find out the reason the first box burned up. To me that sounds unusual, and finding the cause will likely be the answer.
K

Check the cable going back to the alternator. If the cable has a short in it, it can cause the fuse box to heat up and melt. ( from experience).

It is somewhat common for that box to get hot and melt. But a fire? Seems like you'd have noticed some issue long before it got that bad.

This seems much worse on the gassers for some reason.

It seems like it's part of being American to drive until the car refuses to start or move and then perform maintenance.

When my 99 A4 gasser melted the Bus Box, IIRC, the end on one of the big wires was damaged, as well and needed to be replaced.

kaspar01 said:
Check the cable going back to the alternator. If the cable has a short in it, it can cause the fuse box to heat up and melt. ( from experience).
Click to expand...

I think what happens is out gassing from the battery causes corrosion which causes a partial open (High Resistance) leading to heating at the connections and/or cable ends at the Bus Box.
R

Really don't think it is fair or accurate to lump our entire country into the category of negligent.

Notice the pic below has two things that have been extremely hot.

The 30amp fuse to the two fans out front is toast (look below the two other green 30amp fuses to see where the burnt one is/was.

Now, take a look at the large black cable (just below the big red cable). That's the big Hot wire that goes to the Alternator......

Also, notice the lid there to the right ... 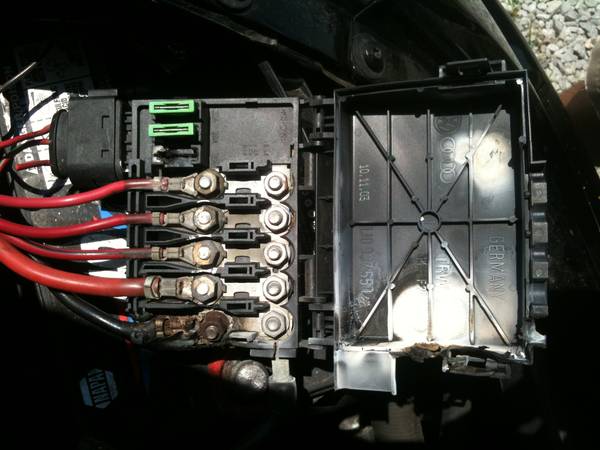 runonbeer said:
Really don't think it is fair or accurate to lump our entire country into the category of negligent.
Click to expand...

Sorry. I don't mean all Americans. Probably an unfair over generalization I know, but I think the folks that are proactive about maintenance are probably out numbered by the "drive it until it breaks crowd" which would be the "Americans" I was referring to.

I would replace the black starter wire in the picture. You can see the crimped end has some of the conductor gone from corrosion and arcing.

That is the wire from the alternator. There is no starter wire in that fuse box. The big starter wire comes directly from the battery, same as any other car.
S

Corrosion can cause higer resistance and lower voltage resulting in heat. It happens in boats in salt water all the time. Mine had the problem this yr. No fire,but a weak start and hesitating power. Changed the wiring and problem resolved.

As Oilhammer stated, there is NO STARTER wire in that photograph!

oilhammer said:
That is the wire from the alternator. There is no starter wire in that fuse box. The big starter wire comes directly from the battery, same as any other car.
Click to expand...

Oops, my bad. That blows my theory on a no crank from the black wire being damaged.

So maybe the battery is close to dead from not getting good clean voltage from the alternator. Putting the battery on a charger would be a good place to start.
P

Where can a new wire be purchased? Dealer is $200

TDI
none, sold it.

wincharger said:
Where can a new wire be purchased? Dealer is $200
Click to expand...

Don't know about the wire, but the fuse box (with ~ 8" red wire to the battery) can be bought from NAPA for about US$60. I just bought one, a mouse ate 3" of the insulation off of the red wire. It is not an exact replacement; a utility knife is handy to trim some plastic, but close enough to warrant not paying the dealer $160 for one.

Well-I hate to say it but after searching- I think this may be my issue. Only problem is mine whole engine bay started on fire. Cold day out and I went to crank it over. Tried twice but it wouldn't start. It started at the same temps the week before. I went inside to call my wife and then someone stated my car was running-nope-that was fire under the hood. I opened the hood-fire came out-I close it and ran for a fire extinguisher. Opened the hood and put it out. Now all the plastic/rubber above the base of the battery is toast. Didn't ruin the hood paint but I fear if they total it. Good to know that this isn't a one off issue of over heating on only mine. FYI-I am not the guy who drives untill it breaks either. I attempt to do preventive maintenance before I have a major issue. Battery was only a few years old and has been starting below zero every time so far.

Any helps/tips would be apreciated. Insurance is reviewing the car today. Covered under comp insurance and I have a $500 deductable. They said they won't cover the part that caused the fire but will cover the other parts damaged from the first part.

Once again, my bad about the negative "drive it until it breaks" comment. I really need to be more proactive.

Must have been a pretty massive short. What part caused the fire?

On mine, the big red wire was corroded underneath the terminal and part way up the wire under the insulation, the terminal showed discoloration from overheating/arcing were it was crimped onto the wire and the plastic around the terminal was melted.

I probably wouldn't have noticed the damage if I hadn't taken the cover off.
Last edited: Jan 7, 2014

I don't know what caused the fire. I have pictures but really want to wait until the insurance figures more out. I myself can't point to one exact thing. It was around 10 minutes from the time I attempted the start to first going out and finding flames. And then another minute or so getting a fire extinguisher. A lot of heat so hard to point exactly. But I would guess the fuze block. Told my family about this. Brother will be checking his as he did smell a plastic burn after a cold hard start once. Couldn't find the source - he may now.
B

cause could be positive battery cable.... maybe hard to tell at this point.

btw - I have a friend - drives American - used to drive w/o changing oil
and after a few years or so just bought another car !! He really is a good guy and maintains his vehicles now.
S

The black wire is the one that got the hottest and caused some melting of the plastic on my car. Turned out to be my starter (likely solenoid was bad).

wincharger said:
where can a new wire be purchased? Dealer is $200
Click to expand...

Only dealer.It is not just a wire. It is Alternator harness.

It is possible to take that fuse box completely apart and clean all the connections. I found the alternator connection and fuse were somewhat pitted on mine, a file made easy work of the tune up.

If it was the starter, it had to be hung in the engaged postion. If that be true, most likely the problem was with the solonoid.

So, if it was the strater, once the engine started, the ALT loaded the battery and starter with plenty of JUICE via the black wire! That wire (as can be seen in my previous post and pic) is the only one that I've ever seen to be over heated. Yes, the green fuse on the left (for both front fans) does explode occassionally....fuse done what it is suppose to do, thus, no fire!

Now, how in the helk can they total your car. The battery case, new battery, new fuse panel and battery cover shouldn't be enough to total the car! Helk, let 'em total and then take the pay and purchase back at a much lower price........ then fix it!

Also, there's nothing magic about the big black wire back to the ALT. Any ALT/Starter shop can make-up one for you! That is not a big issue to address! No way!
B

You can buy wire, connectors and do a decent job yourself.
Alternative is to buy factory wire/harness, etc.

I guess with enough insurance money, you can get another car,
but the retail repair cost can be properly done for a lot less.

Personally, I would fix if damage confined to engine compartment.

I will gladly do repair for the insurance money !!

Here is the pictures. They say it is worth $8296.50 and if I think it is worth more I need a screen shot of the web page of same year within 500 miles. So, trying to decide what to do yet. They won't tell me buyback price till I agree on value. To raise value I need to get other 2004 Golf's within 500 miles and close milage and fax them screen shots of it.

Ok, they said after turning some more stuff in that my car is worth $9,349.2. I turned in some other cars fitting how I needed to search and they knocked off $.04 a mile since mine was higher in milage. Do I fight for more or call it good on that. $500 deductible and they said $1500 buyback which I will do as I think it is repairable after chiseling out the battery/airbox.

did the paint get cooked ? Replacing all the burnt stuff is easy but repainting the whole front of the car might suck away all the insurance pay out