Does your B4 Passat have the factory Premium radio, but the LCD backlights are burned out?? Here is how you fix that annoying problem. The two bulbs that light the LCD are under the LCD on the back of the face plate. They are soldered onto the board that holds the LCD. First get two of these and remove the radio. Before you remove the radio make sure you have the radios code, because when you take it out you will kill the power to it and the radio will be in the safe mode when you put it back in:
Dimensions of the key below courtesy of Wypij. Thank you. 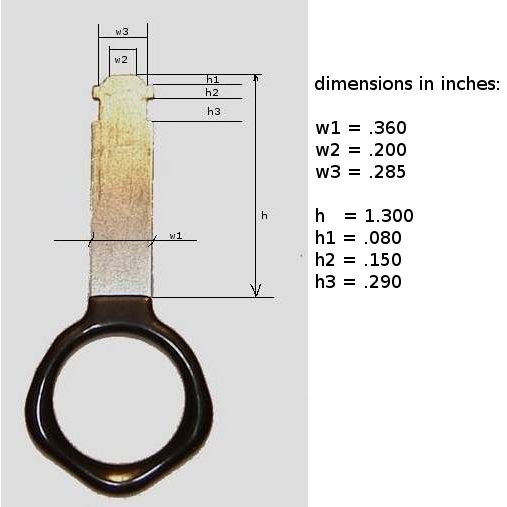 The keys slide into the radio as shown here. You need one for each side: 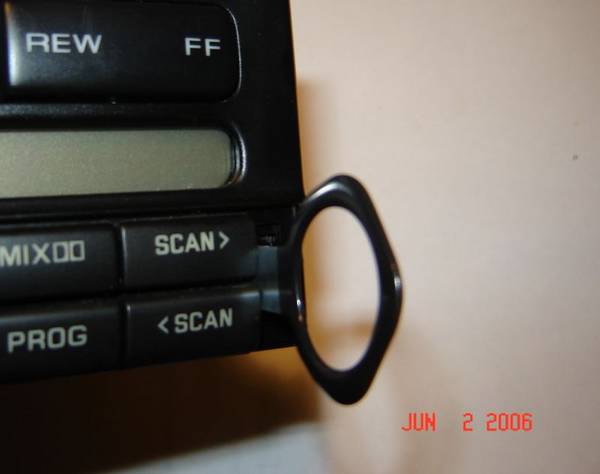 After you insert the keys pull the radio straight out. After the radio wires are disconnected and the radio has been removed you have to remove the face plate. You get a screw driver and insert it behind the face plate as shown and gently pry the face off. It is just snapped on. No screws have to be removed. When you pull the face plate off the volume control knob will pop off, so make sure you catch it so you don't lose it. 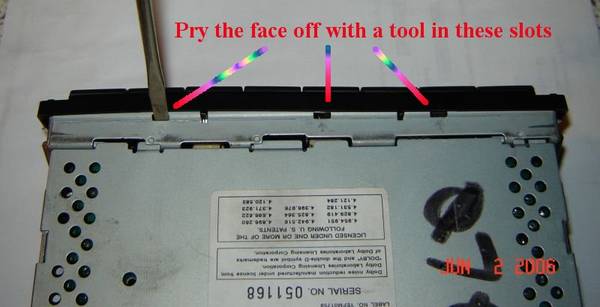 This is a picture of tabs you have to straighten to get the LCD off. The bulbs are hidden under it: 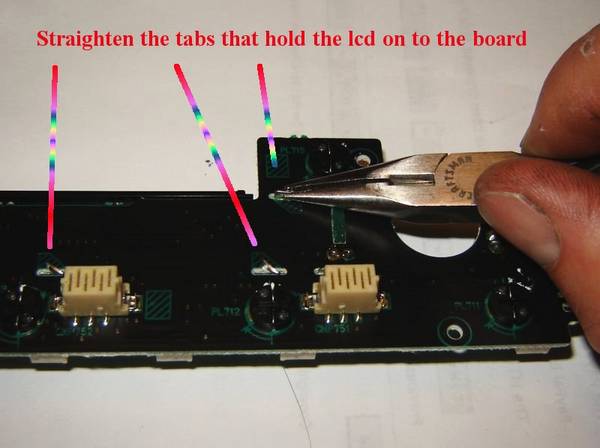 This is a shot of the LCD coming off the board:

After you pull the LCD completely off there are two bulbs, one on each side of the board as shown: 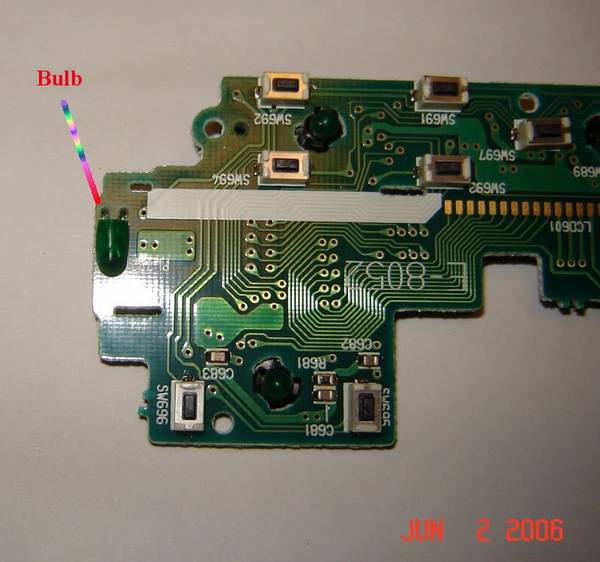 You have to remove the bulbs from the board, first you have to get them out of the green holder that they are in. You can just pull up on the holder. It feels like it is made from silicone or similar material. You won't hurt it. It is really soft. 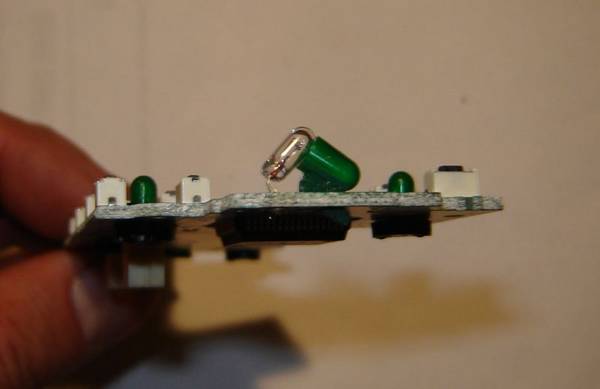 This is a shot of the bulb pulled up and the holder removed: 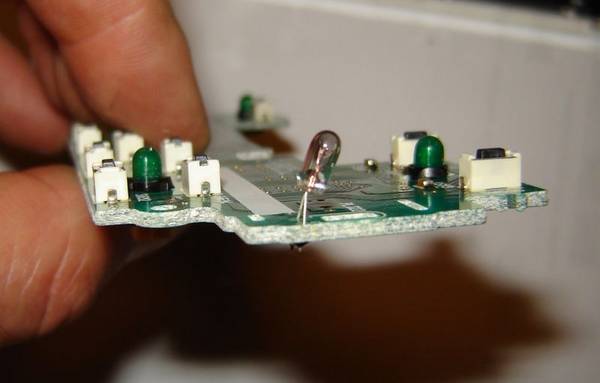 You can buy the bulbs that fit this board at Radio Shack. The bulb number I used is 272-1092 Radio Shack stock number #7219. They are 12v, 60ma lamps, two to a pack $1.29. This is a shot of the board with the LCD removed. After you solder new bulbs in you put the LCD back on the board, bend the tabs that hold it to the board and reassemble the radio opposite the way you took it apart. 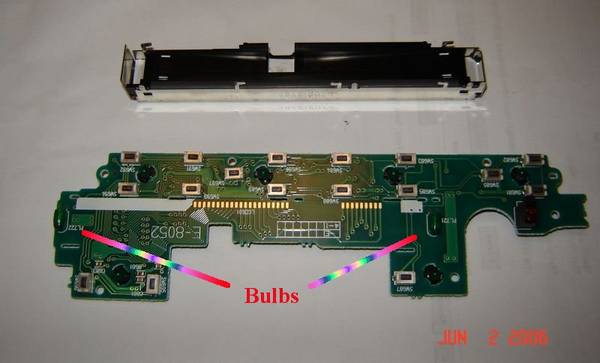 The only part of the job that is difficult is the soldering of the new bulbs. They are small and you need some patience and a little soldering skill to do it.
Ray
Last edited: Mar 14, 2007
N

Thanks for posting this Ray! I wondered why I have no lights at all on the radio display... now I know. May I assume that those radio keys are dealer items?

No problem. I sent you an IM with a place to buy the keys.
Ray
B

Where would i get the tool to remove the radio??

The place I got mine was ebay, there are several people that sell them.
Ray
D

I just bought some lamps at Radio Shack. They are 12 volts and I was wondering if you have any idea what the voltage was of the lamps you replaced?

The only other lights I saw were led's with lower voltages like 2.8 volts.

Any help before I start un-soldering would be appreciated!

Dave,
They are the smallest bulbs that Radio shack carries. I believe that they are 12volts. They are not LED's.
Ray
D

Thanks for the quick reply Ray. It looks like the ones that I bought from what I see in your pictures.

The only difference is that these come with a 1 3/4" lead that I'll have to cut off first.

Nah, solder them in first, then clip them off. they are way too long! just make sure you don't solder the bulb standing straight up with no extra wire to work with. Remember you do have to lay them down parallel to the board they are on. Ask me how I know!

Thanks to Marius (Wypij) for taking my scanned removal key and putting dimensions on it so if you want to make your own........
Ray
D

Thanks again for the post with the photos. I just finished fixing my radio lights and it works great. The whole thing took me about 30 minutes, once I got the radio out! I need to make some of those removal tools.

By the way here's the info on the lights I got from Radio Shack:

Ray, nice write up and thanks for the bulb specs dslemaire.

A few months or so before you wrote this up I had the task of taking 3 complete OEM A3 radios with different problems and creating two complete funtional units. I did take pictures and was going to write it up . Anyhow, it was fun!

Unit one: was a fully operational unit but with a busted up face (guessing it was from a removal attempt with the wrong or even NO removal tools).

Unit three: had a crazy issue with the volume where you'd go to turn it down and it would go up really high!

I was just going to replace the GLX's radio (no back light) with the one from the TDI, but seeing how easy this appears, I'll replace the lamps.
BTW, The radio I'll be repairing does NOT require a code to operate. It is the same Matsu$hita/Panasonic as the other B4 have. I have a code from the prior owner, but have yet to need it despite sitting for weeks (months, really) with no power. The one from the TDI needs a code re-entered each time I hiccup.
HAH! I beat Fred's 'naughty word' blocker.

What about replacing the bulbs that are in the black bayonett sockets? All but one is burnt out on my radio.

No problem, just change them. This how to was specifically for the LCD back lights that go out. You either get a dark LCD or only half of it lit up.
Ray

Sorry I stated my question wrong. I have taken them out but what bulbs to I need to replace them with? Is the one you used from RS the same?

Well, I don't have a radio in front of me, but the ones in the bayonets are just a plug in bulb I believe. The ones for the LCD backlight are soldered in, so they would be different. I think my local NAPA guy carries those.
Ray

Can different color bulbs be substituted? I would like to go blue

The bulbs slide into a little silicone jacket that is green, that is what gives it the color. I guess if you could find them in blue you could get blue lights. Good luck with that one though.
Ray
D

Anyone ever had the "copper pad" that the bulbs attach to disappear when removing the old ones? The left bulb went on great but the copper area the right bulb attaches to seems to have vaporized or melted away. I guess there is no way to fix this other than repalcing the board? Any idea what went wrong and ways to prevent it next time? Anyone have a spare board for a tape deck unit? Thanks!

I have one spare light board with new bulbs installed. If you will send me a PM with your email I will send a picture of it to you in the AM.
Ray
M

Does anybody have a source for those bulbs with the twist-on bayonet sockets? Who makes the radio, anyway?

im with mike. i wanna find the bulbs, but blue

Will this fix the screen on the radio or is it only for the buttons?

The two bulbs singled out in this how-to are the two for the digital display.
All the others, those mounted vertically, are for button illumination.

I finally got around to replacing the bulbs on the radio mentioned in post #13. Really easy with instructions. Thirty minutes is about right.
I replaced them with a pair of the smaller bulbs used for button illumination as I personally feel the display is too bright for night use.

Gotta get around to doing this as the right side is dark, but surely will do the other while it's apart.

Lug_Nut said:
I replaced them with a pair of the smaller bulbs used for button illumination as I personally feel the display is too bright for night use.
Click to expand...

The lower intensity bulbs are nearly perfect for me....at night.
Twilight and dusk could use just a touch more illumination, but otherwise, it's 'more better' than it was with the full-bright lamps.
K

Ray_G said:
The bulbs slide into a little silicone jacket that is green, that is what gives it the color. I guess if you could find them in blue you could get blue lights. Good luck with that one though.
Ray
Click to expand...

If you've ever taken apart a MK1 or mK2 CE1/CE2 gauge cluster, the High Beam indicator light uses a blue cap that can be swapped in place. But I found it doesn't work well unless you can match the rest of the lights. The other option would be to swap in LEDs, but you'd either have to wire in a voltage regulator and some resistors to pull the voltage down to 3v or get some appropriate 12v LEDs with inline resistors wired in. (I actually can't remember what the voltage was at the bulbs.)

I'm going to be pulling mine out tonight and will throw it on my power supply/work bench.
Last edited: Jul 30, 2011
K

Well, just measured it and it's 9vdc. I'm all out of the incandescent bulbs, so I'm going to try to pop in some 3.3vdc green leds (only others I have are super white). I'll post the result.

That being said, if you wanted to change them all to LEDs you can, something cooler would be to wire in RGB leds hooked up to a separate MCU controlling the colors via PWM. But realistically, its extremely impractical and wouldn't match the rest of your interior. (that is unless you wired every light in the car to the same MCU. Also possible, but time consuming/insane.)

Also, if you were so inclined and you REALLY wanted a blue/red/whatever color. You can take apart the LCD assembly and replace the white diffuser screen with the color of your choosing/color it with a sharpie.
You must log in or register to reply here.
Share:
Facebook Twitter Reddit Pinterest Tumblr WhatsApp Email Link
Top