Anyone still have their TDI's?

2002 New Beetle, undergoing an auto to 5speed swap this week.
I

Pretty positive (95% certain) I'll be selling my '03 Jetta (signature vehicle) when my ML350 comes back from having been tuned. It should make a great care for someone. Stay tuned! No pun (well kinda) intended.

Still have mine. I'm going to drive it till it dies.

If I didn't still have my TDI, why would I be looking at this forum?
Am I missing something here?

Stinkyfingers said:
If I didn't still have my TDI, why would I be looking at this forum?
Am I missing something here?
Click to expand...

There are quite a few people who sold their TDI but still come to the forum. I think it's the camaraderie of this place and the willingness to still want to help others.

JDSwan87 said:
There are quite a few people who sold their TDI but still come to the forum. I think it's the camaraderie of this place and the willingness to still want to help others.
Click to expand...

Yup - I'm still here even though my last TDI went away over a year ago. I still work on TDI's and enjoy spending a few minutes here and there reading the forum.
E

Like many here, the torque, space + fuel economy are sorely missed.

It's all good (this site included!)

oilhammer said:
I'm not going anywhere. I'm like that big heavy cast iron bath tub in a house you just bought. Too much trouble to get rid of, still works OK, and you can just ignore the ugly stains.
Click to expand...

Still have the '99 NB, the '96 B4 wagon project. Haven't gotten into anything newer yet, none of this buyback stuff. We've had these "cast iron tubs" long enough now we can save the annual $$$ plate registration BS with Collectors plates, soon enough. Yes, our 2nd floor BR still has the cast iron tub, best seat in the house......
Last edited: May 21, 2018

JDSwan87 said:
There are quite a few people who sold their TDI but still come to the forum. I think it's the camaraderie of this place and the willingness to still want to help others.
Click to expand...

Agreed, I have a few people who I am good friends with that still post and have TDI's. One is Dweisel and we have been on some "adventures" together in his quest to round up all the available Beetle TDI's in North America.

I currently do not have a TDI in the stable, but my son-in-law is driving my previous 2005 Jetta TDI.
D

Mine rolled over 300k 2 weeks ago, other than leaking valve cover and busted exhaust shes still running strong!

duwem said:
Mine rolled over 300k 2 weeks ago, other than leaking valve cover and busted exhaust shes still running strong!
Click to expand...

'99 NB still in the rotation. Gimpy turbo and wanky 1st gear shift-in and all.
C

Still have the green machine. She is less that 100 miles from 327k miles. She is slowly rusting away. But has been a good backup car. Replaced with a 2003 Beetle TDI with only 114k miles last June. One year later, just a few weeks ago deer jumped out and totaled the front end. I feel like a traitor after picking up a 2002 Jetta 1.8t but low mile TDI's are few and far between now.
D

I still have the first one I bought, almost, It's on a permanent loan to my brother. That's the B4V. It looks pretty bad but still runs great. I also have my first A3. It's our spare now since I found a '98 GT from CA and converted it. And my daughter is still driving her A4 Jetta. I just love the old ones.

I just did a 360k mile service on my favorite 2011 Jetta today. Also got its original front brakes replaced.

I still drive mine. Seems to be consuming some oil between changes lately, though.

I am in the process of selling my 2004 NB TDI. At this time I don't have the money to fix all the issues with it. Currently going back to college for a degree in NSA/IT nor do I have time to fix them.

A modded TDI was a rare sight before, but even more so now.
The sound alone makes people look and wonder. It's odd in a good way.
Where else can you get a small ICE car that will still be pulling past 160 and return 40+MPG when you drive sanely? Unobtainium.

My GTI is a much faster car, but to make it faster than the TDI and get the same MPG just can't happen.

I bought my TDI back in 02. The mod bug bit when I met Jon Hamilton and Jeff at Rocketchip at a GTG in Ohio. I've since been through several rebuilds, blown turbos from Street Toys, drove across the country multiple times, been stranded in snow and rain, and had many troubles and headaches with this car.
As much trouble as it has been, it has also made some very good memories along the way. I've also met some really good people on here over the years.
Coming up on 20 years for some of these TDIs. That's antique status in CT!

Not giving up TDIs anytime soon

I purchased my brother's 03 Jetta and will be keeping it (Georgia car).

84 Vanagon ALH toy of mine will be around for years to come.

And, I have two ALH Jetta junkers for parts, both automatics purchased cheap.

Long gone and now, my visits to the dealer are maybe once a year instead of 1 to 2 times a month.
G

I only visit dealers for freebees...

Bought my ALH golf new in '03, it didn't see a dealers shop until VW paid to fix the rusted fenders in '14.

gearheadgrrrl said:
Bought my ALH golf new in '03, it didn't see a dealers shop until VW paid to fix the rusted fenders in '14.
Click to expand...

Unfortunately the newer TDIs are more addicted to the dealers. My 2013 JSW made it through the dealer done 10,20, and 30 thousand miles freebee services no problem. Then took it to a dealer in Ft.Myers FL for an alignment and the screwed it up even worse and tried to blame it on rust from being a "Minnesota car". They gave me a $1000+ estimate to fix the damage they'd done, I went after the frozen eccentric adjuster with penetrating oil until it came loose, then had an indie shop align it properly for $100. Did the 40k and 50k myself and turned it in. Replaced it with a new '15 Golf TDI, Mankato dealer overfilled the oil but accepted responsibility and paid for St.Louis dealer to fix, had no problems with their freebee 10k service.
S

I had intended to keep my '14 JSW TDI until the bitter end of the buyback period (December '18). I intended to buy a new Buick Regal Sportback to replace it.


However, in mid-July President Trump's threats of tariffs on cars imported from Germany (the '18 Regals are assembled by Opel in Germany) scared me into accelerating my timetable. So I bought the Regal on July 16th. The first appointment to turn in the VW that I could get was August 8.

Turn-in appointment went smoothly; the money was in my account when I checked 7 days later. I'm just waiting on the check from Bosch to close the books on VW ownership.
K

What's your opinion of the Regal compared to the JSW?
S

31 mpg on premium in the Regal; 41 mpg on diesel (typically costs less than premium) in the Sportwagen, so the Regal costs more to operate. The Regal was more expensive to purchase. But I like everything else about the Regal better.


The Regal is roomier, quieter, and more comfortable than the TDI. The Sportback configuration meets my needs. In fact, I only considered cars with this configuration. In my price range it came down to the Regal and the Kia Stinger. If anyone is considering either car, I recommend that they test drive both.

In summary, I spend more on fuel with the Regal but otherwise I like the car better.

Just rotated the tires and bled the brakes on the '99 NB. Still runs like a little 5 spd slot car / go kart. ***H would I want a Buick for?
I

Jason, this one is now in your neighborhood. 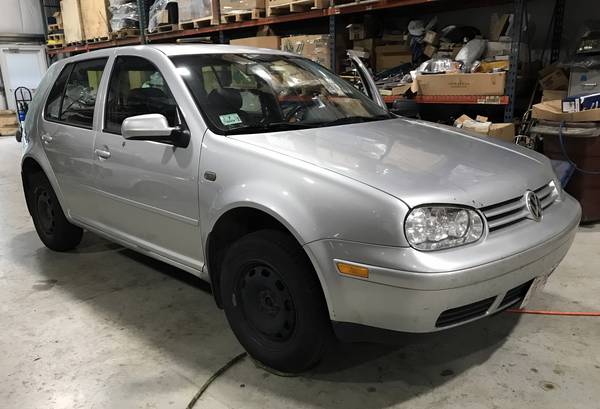