And now, for something completely different; Audi 5cyl Turbo Diesel build up!!

AND NOW, FOR SOMETHING COMPLETELY DIFFERENT!

I recently picked up an '87 Audi 4000CS Quattro, which had been sitting for quite some time with CIS fuel injection woes. I had worked on it when it was up and running years ago, and had fond memories of test driving it in the snow. When I came across it languishing behind a local general repairs garage, I figured I would try to save it.
sad Audi

Off to a new home here is a video of running it on ether since the main fuel line to the accumulator is rusted out...
http://s1163.beta.photobucket.com/user/flyingscott88/media/Audi%204000CS%20Quattro/IMG_1233.mp4.html
So, with having to revamp the fuel delivery system against me, and desiring to upgrade the stock engine to something a bit more exciting, I started going through my available options.
First thought was, AHU swap. I would have to get a Euro 4cyl bolt pattern 016 trans to use the AHU without an adapter, or I would have to change to a more modern Torsen diff setup since the later gear boxes are dual bellhousing bolt pattern, but I want to keep the manual diffs.
Having to keep a five cylinder to use the stock driveline, I thought about a 10V turbo MC1 or MC2, which can be had cheap. Nearly everyone with a 4KCS quattro does that swap though.
For A LOT more money, I could get myself going building a 20V turbo...But that can get scary fast....I don't want to spend too much building this car...

SO this is where my path went astray of the norm...

30 years ago, my father and one of his good older friends, Lee Fenton,who was a huge influence on me and like a true guru, were huge into diesel power. They loved M/B, VW, Peugeot diesels, and collected many M/B 220 and 240Ds and one 1983 Audi 5000 TURBO DIESEL!!! They got it cheap because its Auto tragic slush box was pooched after 129,000 miles,,,BIG SURPRISE RIGHT???
Needless to say, they never got around to fixing or finding another transmission for the Audi, but they knew the engine would be worth saving to repower something else some day....So they would periodically run it...But the last time I remember it running was over TWENTY YEARS ago..I was like 5-7 years old or so IIRC...
My friend Lee passed away due to complications from cancer, he was nearly 80 years old. If you knew him and his various exploits racing motorcycles , you would be amazed he lived that long! (He raced motorcross in the late fifties before there was anything remotely similar to a dirt bike)
After Lee died, his shop and vast collection went to his son, who is also a friend of mine. He is cleaning up the shop and getting rid of some of the more rotted out cars, and the Audi was one of the first on the list....
I stopped him and told him Lee would want us to at least save the motor.
I did. I got it out in a couple of afternoons. 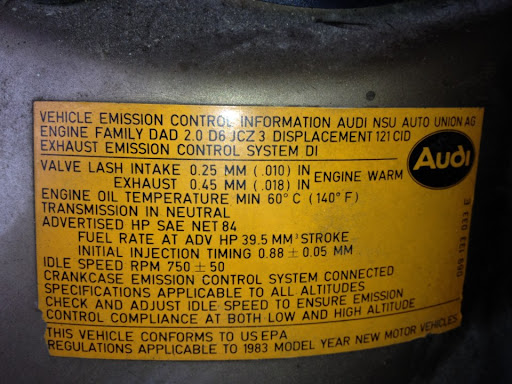 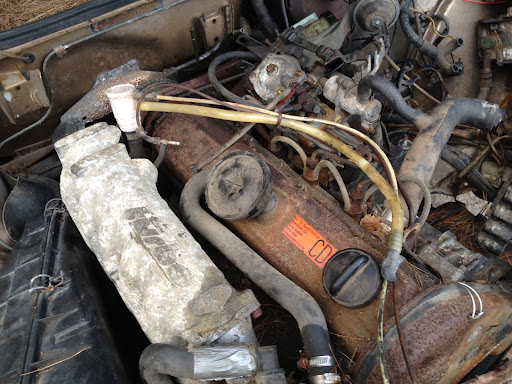 I highlighted the cool "turbo"script with my greasy fingers!! 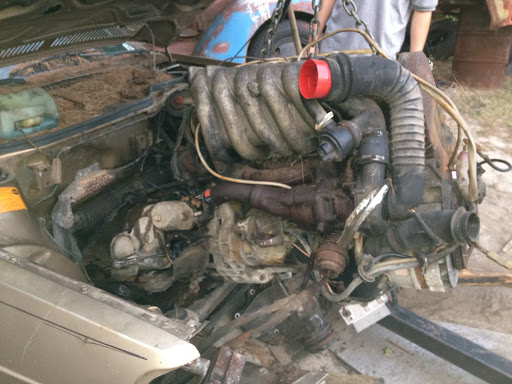 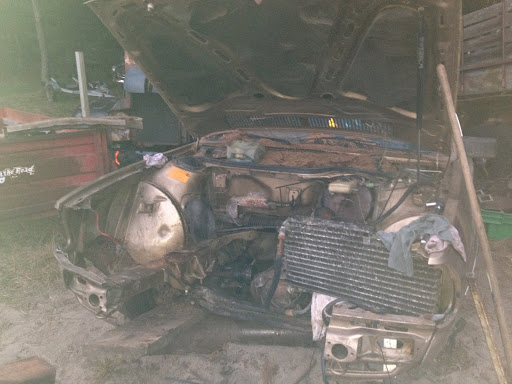 What better temporary cover than an old Beetle hood? 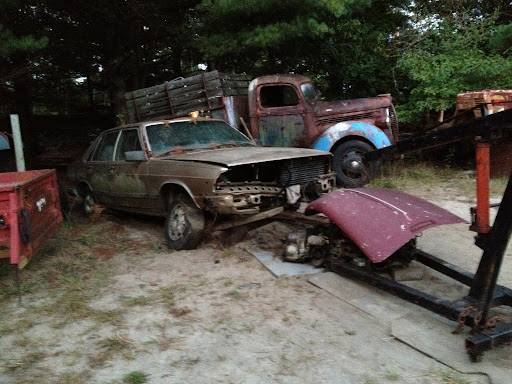 Here is a video of it running after being dormant for so long!
http://www.youtube.com/watch?v=O2poYPJN3yM&feature=player_embedded

So the plan is....
Pull head, port, polish, maybe bigger exhaust valves (33mm rather than 31mm)
MOAR FUELZ !!Turn up IP, governor mod, If I win the lottery it is going to Giles!!!
Inter cooler
MOAR BOOST!! The stock K24 should be more than adequate and is in excellent condition.
Last edited: Sep 29, 2012 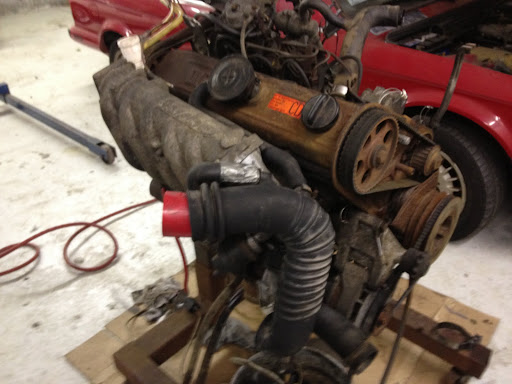 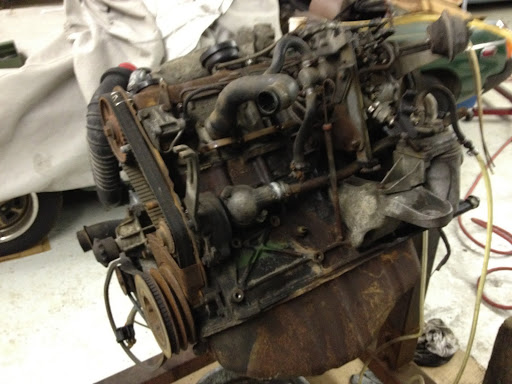 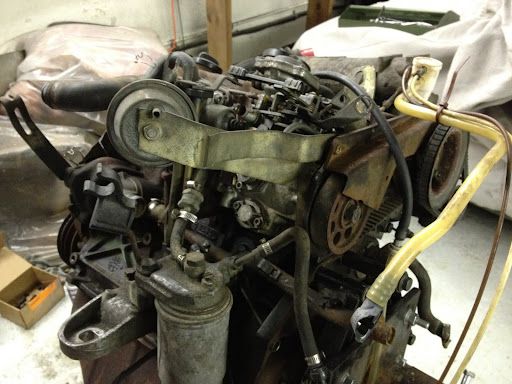 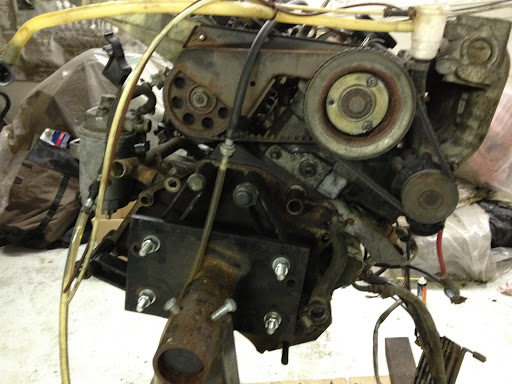 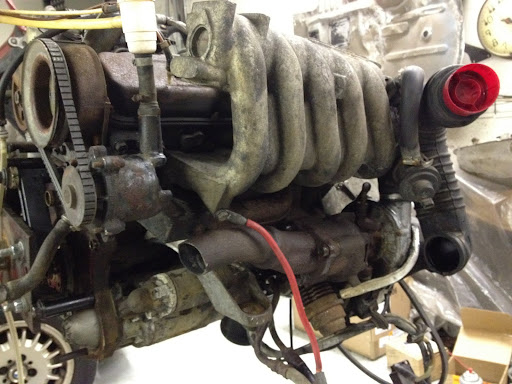 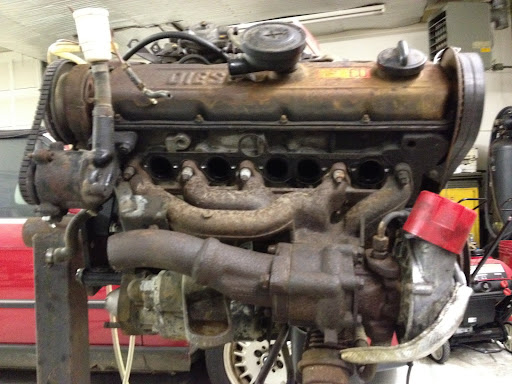 The intake manifold is virtually identical to the 10V turbo gassers minus the throttle body and most of the mounting bosses aren't drilled and tapped! I am thinking of modifying a Gasser intake to replace the PD intake on my GTDI.... 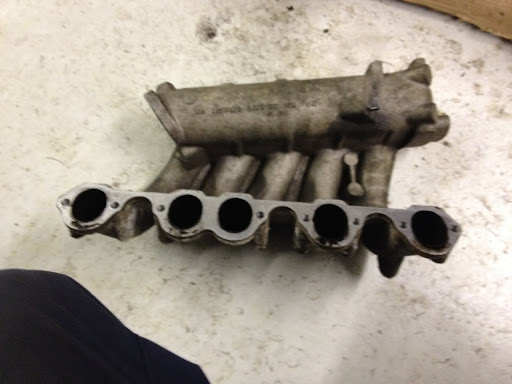 nice that thing is gonna be SWEET! if you want, i'll rebuild that engine for ya!!

burpod said:
if you want, i'll rebuild that engine for ya!!
Click to expand...

Since intercooler setups are a tight fit on these inline fives, I am contemplating modifying a gasser turbo intake to hold a air to water intercooler a la Dieseleux...no boost lag and or plumbing is enticing

chris, remember i think i have this water/air or something intercooler in the shed! i think it may have even come from an audi??

better watch the garage door at night, else i'll sneak in and rebuild that block bwaaahahahhahaa

Here is the kind of intercooler Pod gave me!

Wow what a sweet motor to have floating around.

Def will be following this one.

NO RUST on the turbo flange studs/nuts!! I am amazed! 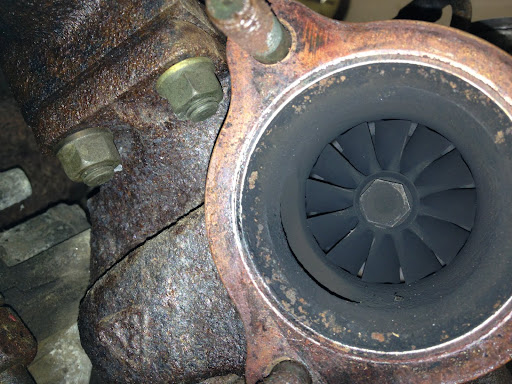 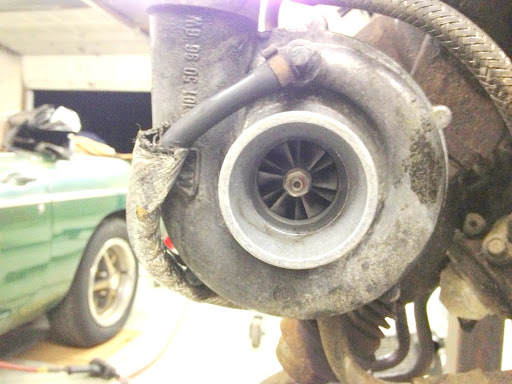 The vane style vacuum pump is positively lubricated where it bolts to the cylinder head, a nice long lasting design IMO 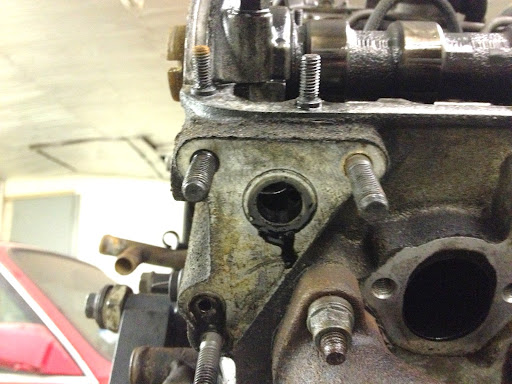 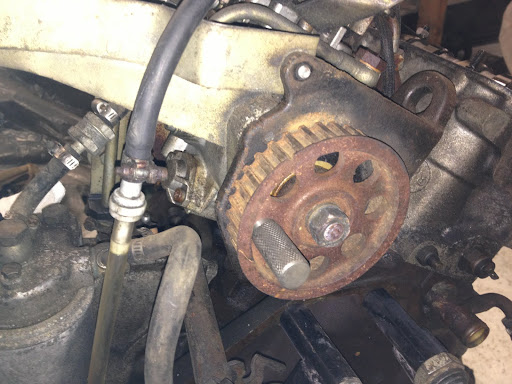 Loose Nut Behind the Wheel Vendor

Why am I not subscribed to this thread yet?

Seriously, this thread is win.

Ordered a bunch of "whole sale closeout" parts from Rock Auto. Most of the stuff is Beck/Arnley, which I have been told is usually re-boxed name brand parts. For the amount of stuff I got and how much I paid, it should be worth it! Some of the parts are hard to find! I got two head gaskets, a two hole and a three hole, and I am contemplating running the three hole to slightly reduce CR so I can crank up the boost...I did this on my 1Z build and it seems to have worked out fine, the few times I have driven with a boost leak were surprisingly not TOO slow ha ha!

Personally, I wouldn't screw around too much with compression - you don't want to go below 20:1 or so, as these IDIs need all they can get for good startup characteristics.

Also, being a 1983, it may not have the very latest glow plugs. So, update the glow plug system to as new as you can get it (the system in the Canadian 2.4NA Eurovans would be ideal), for the fastest, most powerful glowing.

4000cs is one of my favorite cars of all time. I dream of one day having an AAN powered rust-free 4000. I actually had the opportunity to buy one, and i came so close to doing it, but I would have run myself dry of money (im only 20 years old and going to university) and it just wouldn't have been a good choice.

Here is the one I almost bought. That's my Golf at the beginning of the video. Listen to the 5 cyl exhaust note at :22, so sexy.

Like I said, I considered an AAN, but it just isn't a path I want to go down, things get expensive quick!

for those that don't know here is the famous 20 valve I-5 AAN motor in its natural habitat (sorry to distract from original post, but this video must be shared) They can break the 1000hp mark with enough money.
http://www.youtube.com/watch?v=rkXJST4bExs
Last edited: Oct 2, 2012

That thing is killer, but far from the AAN's natural habitat...
THIS is the 20V 5cyl turbo's true natural habitat!
http://www.youtube.com/watch?v=7AQmgeMoM0A
Q

Good rescue!! It should make for a fun car. I'll keep an eye on this build. 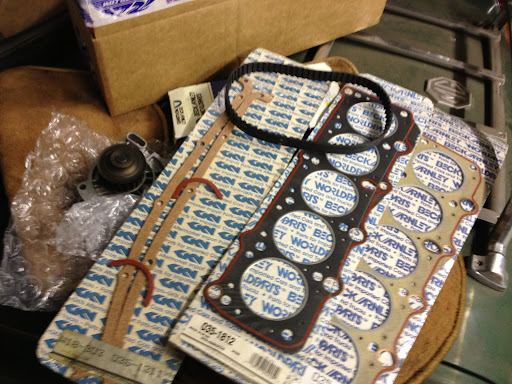 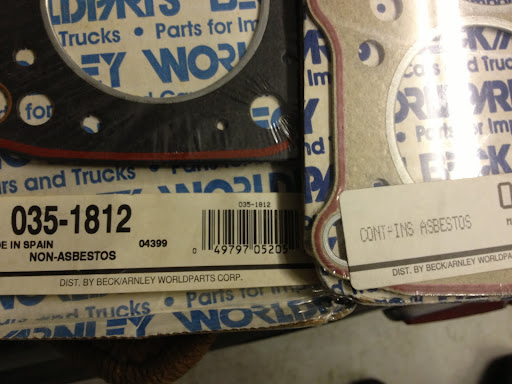 Asbestos head gasket?! I think I am going to use that one, it is a two hole and the original appears to be a two hole, but the dial indicator will ultimately make that decision. I would like to find a MLS gasket, but beggars cant be choosers. I emailed 034 about how thick their MLS headgasket for 10V turbos is but no reply yet.

Earlier this summer an old guy that used to work at the shop I work at gave me a couple special tools he had bought for servicing his Volvo 740TD. He thought I might have a use for them. At the time I didn't, but special tools are special tools so I hung on to them....Now I have a use for them! I was reading through the Audi manual another old guy I know had given me and there were the tools in use! I thought they looked familiar! 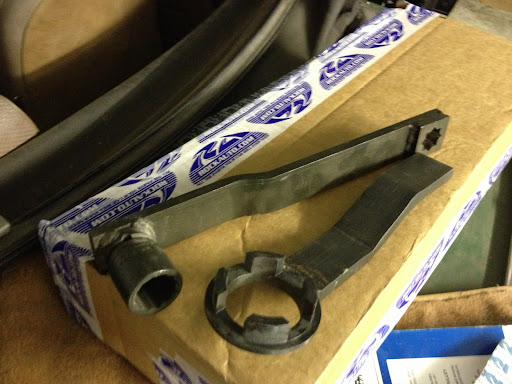 The thing you have to be careful of is that you need a head gasket for a solid lifter diesel. Most of the newer stuff is designed for hydro lifter diesels.

bhtooefr said:
The thing you have to be careful of is that you need a head gasket for a solid lifter diesel. Most of the newer stuff is designed for hydro lifter diesels.
Click to expand...

The head gaskets I got look to be about 20 years old, and they were listed ONLY for the 2.0TD. I would hope that Javad would know the difference. I still haven't heard back from them yet......Even if their gasket won't work at least say it won't!

bhtooefr said:
Yeah, I'm not worried about the old stock stuff, I'm worried about new stuff that you get to replace it.
Click to expand...

I am using the old stock asbestos gasket!

I was merely inquiring about a MLS gasket because of their durability in a high stress environment compared to composite/fiber gaskets. I would prefer to overbuild this engine to a certain extent, it will need it considering how I tend to mercilessly flog my vehicles! I can fix em so why not?
Last edited: Oct 5, 2012

The only tool I don't have is the cam lock bar for this engine. It differs from the norm because of the fact the the end of the cam protrudes from the cylinder head in or to drive the IP sprocket and the pulley for the vacuum pump. also there are 6mm shouldered studs for securing the v/c so that will need to drill holes in the locking plate I fabricate which will actually help keep the plate in place before it gets shimmed!

Pulled the 4KCS's headlights, grille, bumper trim and started spraying everything I need to take out with the Howe's penetrating oil I won at the raffle at Fest! What good stuff!

I have been looking at how I will fit the intercooler...There is no doubt that I will be doing some chopping of the front sheet metal and having to make a custom Rally-Quattro style grill...I am not planning on keeping this car stock looking at all...

Also I am going to be doing one of my standard mods...Rear mounted battery....but in this case there is no choice as that area needs clearance for the Vacuum pump and IP pulleys!

picked up a set of solid lifter valve shims from Shine Racing Services today, along with a bunch of other useful tools.
I snagged a cam lock bar that looks like it will work on the 5cyl. I either need to remove the studs or drill holes in the bar. I am leaning towards the latter.
You must log in or register to reply here.
Share:
Facebook Twitter Reddit Pinterest Tumblr WhatsApp Email Link
Top