PickleRick said:
Any valve train mods needed to run at 4800 rpms for hours on end?
Click to expand...

stock valve springs do pretty good with bigger turbos, as you don't have as much exhaust pressure trying to blow them back open
stock oil pump/drive gear is better than the faster brm one which some people have had cavitate at higher RPM

on the lag, a couple seconds' lag ain't bad on a marine engine because you've only got the one gear. With decently done up maps it'll come on (and not wreck anything) lugging it at 2k RPM. One of the magical things of turbochargers is that attribute, they aren't connected to the crank so they'll come up to speed at basically any engine RPM.
People here are overly sensitive to it because pretty much everyone runs a manual trans in a lightweight car.

ETA: my comment of the turbo waking up eventually at 2k is not to mean you should be setting up your prop to live down there. unless you're happy with limiting it to less than stock hp output. Motor would not be happy with that kind of torque load at 100 percent duty cycle.
Last edited: Jun 10, 2019

With my boat hull. 4800 to 5000 rpms is currently max speed. Unless running from a storm im usually cruising at @ 4000 to 4200 rpms. The cruising speeds will be maintained for hours at a time. The goal is a Charleston sc to dry tortugas round trip but also many lake trips in between.

There is also a lot of hull speed cruising. This is 6 to 7 knots, 1500 to 2000 rpm no wake cruising. Sometimes down to 4 or 5 knots for trolling. Pretty much an extended cocktail hour no where to go in a hurry enjoying the ride boating .

Slow no wake cruising speeds like you'd do around marinas, bridges or trolling for fish would be 2000 and less.

Cruising on plane would be over 3500 for a 23/24 ft modified V flat bottom planing hull. My boat isnt super happy on plane until around 4200 rpms. There are other hulls out there that may get on plane easier/less rpms but this is going to be a good "norm" for most 90s eras cabin cruisers in this size range.

There is the possibility of a 3 speed transmission, inboard velvet drive and a huge propeller but it wont work on this boat. Maybe an old tunnel drive pen yan.

PickleRick said:
Any valve train mods needed to run at 4800 rpms for hours on end?
Click to expand...

I think runing a tdi on water AT more than 3500rpm will grind The engine în a few days of use. I run a 2.0tdi BMM on my Searay 185sport. Had a 4.3tks/alpha one gen2 1.8r and switched IT to tdi.
The mods were:
-1.65r upper gears (24 drive 24driven)
- cut a 5 inch slice out of a manual gearbox . Used this to mount The starter and also welded 2 arms that fit on The transom mount.
-1 inch thick Steel front engine arms to fit on 4.3 engine mounts.
- watercooled exhaust pipe after The turbocharger
- mercedes GLC 2.2cdi watercooled intercooler (A friend of mine, on his Bayliner Cuddy, îs using a universal watercooled intercooler bought on ebay and works also great)
-water-coolant heat exchanger stainless Steel made (my pal, on his bayliner/1.9tdi runs sea water în The engine and changes The engine every 4 seasons.. About 500usd for a 1.9tdi pd)
- ecu job on EDC16U34 (egr off, dpf off, remap AT about 160 shaft horsepower) - again, my friend uses a EDC15, much easier to tune and a AVF/AWX engine .
- 1200 celsius heat resistant heat wrap on The exhaust manifold.

If you want me to upload some clips please tell me how.

Tried to fit a core- watercooled hibryd turbo but IT didnt made The bosst. Guess jap cartridge didnt liked The garrett housing so I swaped to a GT1749VK.

Numbers;
În plane în 5-6 secconds
Cruise AT 2500rpm
Max 60km/h AT 3500 rpm
Will install a EGT sensor tomorrow. My tuner told me to check on EGT and send him feedback. Still trying to fine tune The ecu. More than 700 celsius degrees on turbo will kill IT.
Fuel consumption-- about 3.5 galons /hour AT Cruise speed.

@Dukku
Thanks this is very informative

Here is a clip with the boat. EGT îs about 450 celsius AT WOT.
https://youtu.be/fbAf7N1sHS0

dukku said:
I think runing a tdi on water AT more than 3500rpm will grind The engine în a few days of use.
Click to expand...

what? it is the same base engineering sheet as the 1.8t and 2.0 gasoline engines, which are cheerful to sing at 5k all day
only reason the 1.9s don't rev is the stock turbos are absolutely tiny and choke the engine out past 3k

The vw 2.0tdi marine, as I read on a spec sheet, îs rated AT 3500-3800 rpm. Its not just The turbo, îs The EGT that results, and be sure that The marine version îs better than a marinised vw engine as we try to.
Comparing The 1.8T to 1.9/2.0 tdi, I guess The pushrods AT The tdi are longer.
The only Vag tdi engine rated AT 4500 rpm îs The 2.7tdi V6 wich îs a square engine(much like a gasoline engine) meaning That The bore and stroke are equal.

În Europe we have 1.9sdi and 2.0sdi and, despite The fact they are naturally aspirated engine, The power îs rated AT 4000 rpm.

dukku said:
The vw 2.0tdi marine, as I read on a spec sheet, îs rated AT 3500-3800 rpm. Its not just The turbo, îs The EGT that results, and be sure that The marine version îs better than a marinised vw engine as we try to.
Comparing The 1.8T to 1.9/2.0 tdi, I guess The pushrods AT The tdi are longer.
The only Vag tdi engine rated AT 4500 rpm îs The 2.7tdi V6 wich îs a square engine(much like a gasoline engine) meaning That The bore and stroke are equal.

În Europe we have 1.9sdi and 2.0sdi and, despite The fact they are naturally aspirated engine, The power îs rated AT 4000 rpm.
Click to expand...

fun aside, marine and industrial motor ratings are typically 100% duty cycle where automotive ratings are generally lower duty that that, where if you run them at their rating for hours on end things tend to fail quick.
in a gas application they'll slap a tiny carburetor (long ago) or camshaft on it to limit power output, where on a diesel they just pull some fueling to limit output to where it'll hold together

by pushrods, pretty safe to assume you mean connecting rods, which is a common modification to higher revving engines. Move the piston pin up in the piston for a longer rod and a better rod angle. Our motors have a higher deck height, some guys use a deck plate.

Connecting rods, sorry for The mistake.
The idea îs that I run my tdi boat engine not higher than 3500 rpm and The usual cruse speed rpm îs about 3000-3300. And EGT lowe than 500 celsius.
If anybody would run their marinised tdis AT higher rpm for more than a few minutes.. IT would be their choice and it's not my business.

And one more thing, The 1.9 tdi car engine, across Time had been tuned în different power ratings.
What i've notticed îs that The heavier The car, the lower was power rating set

For example, on caravelle van, The 1.9 tdi is rated AT no more than 105hp, on Passat The older edc15 was tuned AT 131hp while on golf 4 wich was lighter IT was tunned AT 150hp.
I guess for The engine parts to last longer îs better to have that în mind.
By my oppinion a engine feels The boat like a car fully loaded pushing uphill continuously.

A marine mechanic once told me they assume a marine engine runs at 90% load 90% of the time, as opposed to an automobile 10% load 90% of the time.
I met someone in Houghton Michigan that was traveling the Great Lakes with a 32 foot tug with the 6BT in it. He claimed it felt like the turbo wasn’t coming on the way it should. Considering what exhaust gas temps must climb to while pushing water it makes sense that that is the way it was properly set up to run.

Lets not forget that that's not always the case. The marine 4bt put out 250hp compared to the 130ish hp found in a delivery truck. Mostly used in trawler type displacement hulls. Think boat from jaws. 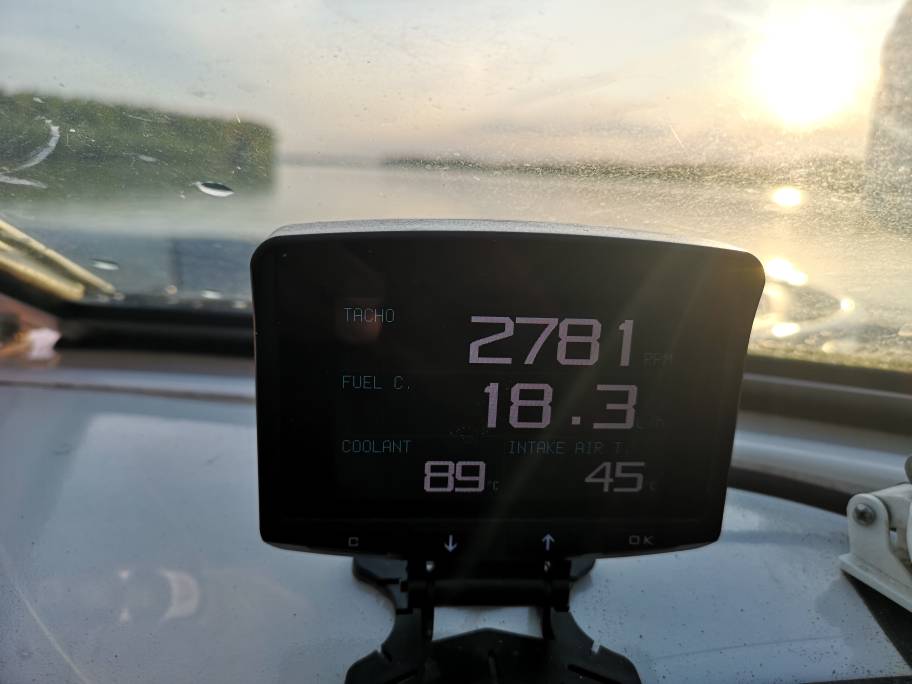