Folks,
I've always liked the Audi TT and wished that they came with a diesel engine. Over the past couple years, I've been searching for an early Audi TT with a bad motor. I finally found one the week before Thanksgiving. The car is in great shape but the timing slipped a couple years ago. The previous owner had the car in their garage with the intent of fixing it at some point. They needed the space in their garage, so they decided to sell it. Here it is on the ride home: 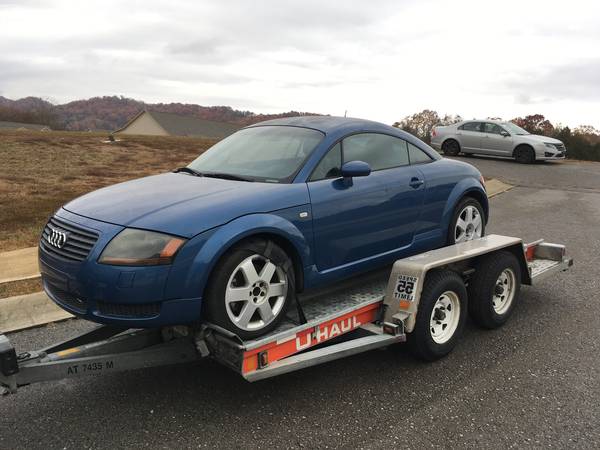 I see in the past couple of month Toby_B did an Audi TT conversion and Bobob729 is in the process of doing one.
My donor car is a 2002 Golf ALH with an automatic. The car is totaled, but the engine is good. I have a 5 speed transmission from my 2005 Beetle that has the .658 5th gear I pulled when I installed a 6 speed from Ryan_P.
I'm just getting ready to pull the engine out of the Audi. After that I'm going compare the wiring between the Golf and the TT to see what all needs to be changed before I drop the ALH in the Audi. Here's the Audi in my "Blue Sky" garage (outside): 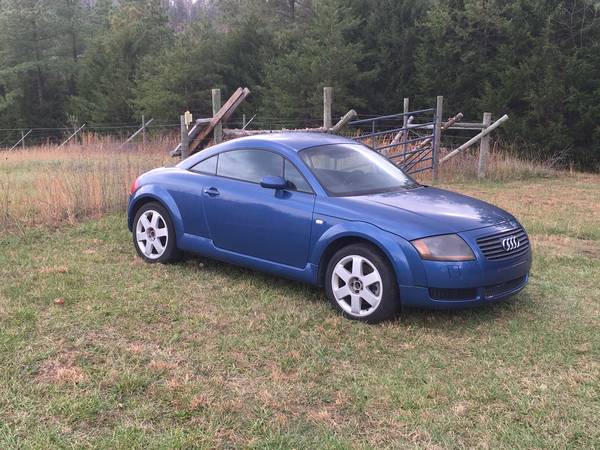 And a picture of it with the transmission removed: 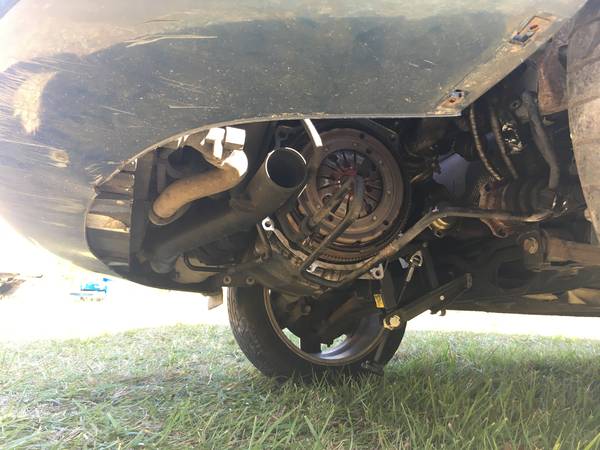 I'll post more as things progress.
Update...Update...Update...Update....
This past weekend I finally had everything put back together.
Rather than post at the end, I'm updating my first post: The Audi TT with the ALH is running! I put the motor and transmission in a couple weeks ago and have been putting everything back together since then. I'm using the ALH downpipe and all the piping for the turbo/intake. I had to drill two holes to mount the fuel filter on the passenger side support. I filled the fuel filter with a can of diesel purge and then used my mighty vac to pull fuel up to the filter from the tank. Got in the TT and turned it over and it started after 5 seconds of cranking. Yea!!! Scanned with VCDS and everything looks good. Next up I'm doing new tie rod assemblies, ball joints, strut bushing/bearings, lower control arm bushings, brakes. What a blast to drive!!!!
A couple random thoughts:
1) Wiring was a challenge since my Audi was a very early 2000 and the wiring diagram did not match the Bentley. I emailed them but the only response I received from them was "we have everything from Audi". My response: no you don't. I traced the engine harness side to figure out what wires to move.
2) I could have used the fuel pump relay to act as relay 109 IF I would have traced the engine side wiring first (rather than use the "useless" Bentley wiring diagram)
3) Make sure you take notes and check everything.
4) Seat all electrical connectors.
This has been a lot of work but fun. I'm going to drive it for a couple months, then upgrade the injectors, exhaust, intercooler, and then get it tuned. What a neat car!
Eric
Last edited: Mar 3, 2017
S

I pulled the 1.8l engine from the Audi today. I unhooked the power-steering pump and A/C compressor from the front engine bracket and moved them down below the engine. Disconnected the down pipe from the turbo. Removed the front bumper and unbolted the radiator support and moved it forward to make room to lift the engine out of the car. Everything went smoothly. Here's a picture of the engine compartment: 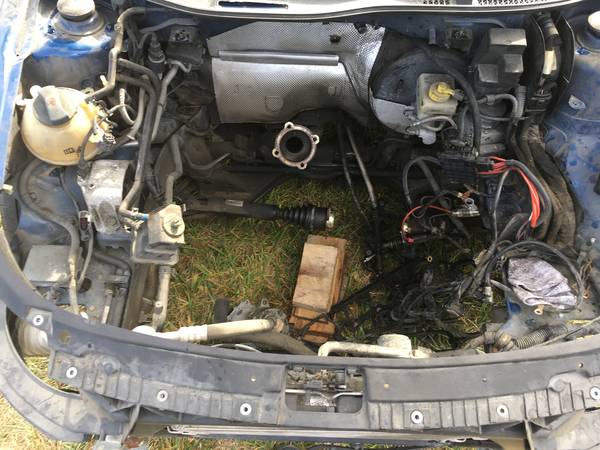 I disconnected the wiring from the engine and moved it to the side. I'll remove the engine harness once I've got the TDI one ready to go in.

Looks good! This will be a sweet car when its done. I hope i'm not holding you up to bad with the harness. I will send you the pictures tomorrow. And we will figure out if I have what you need.
B

Good move & looks to be a great shell for the conversion. Consider the Eurorunes 6 sp conversion for to add to your 5 speed as you put it together.
M

You get +10 style points for doing this outside. I did a turbo fabrication on my old tacoma outside before I had my garage. It add a whole new level of difficulty to any project.
S

Working outside on the ground is always "fun". I've got a 40x60 barn with a concrete floor.....that has all the haying equipment and hay for the wife and kids horses. All I can say is grass is better to work on than a gravel driveway.

This past week I dropped the axle beam and removed the fuel tank to remove the EVAP/emissions equipment: 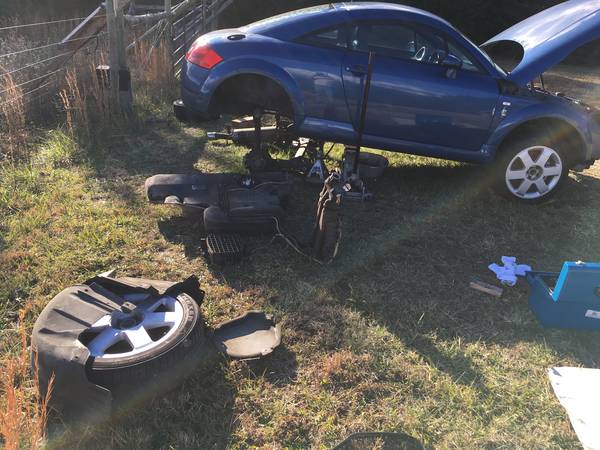 There was a large carbon flter(?) under the car under the wheel well for the spare tire. There were also a set of EVAP lines that ran from the front of the car back to the tank and the other EVAP/emissions equipment. Here's the tank with the carbon filter(?) 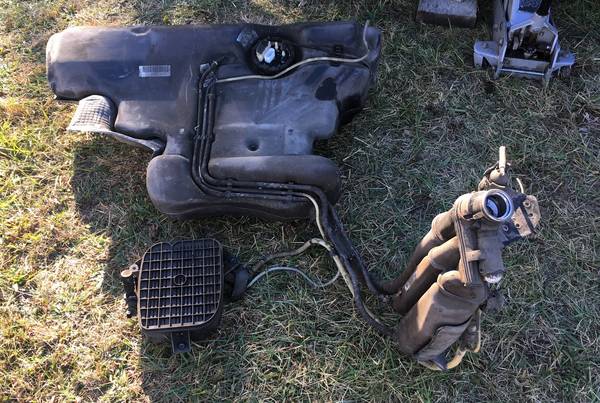 Once the tank was out, I removed the fuel pump/sending unit and drained the remaining gas from it. I washed all the dirt off the outside and ran some soapy water in the tank to clear out any remaining gas. I then took a 1 5/8" hole saw and cut out the metal restricting plate and "flapper" for the gas nozzle. I turned the tank upside down on my work bench and drilled "up" so the plastic/metal shavings didn't drop in to the tank. Took all of 10 minutes to make the tank "diesel ready"

I put everything back together this weekend once the weather warmed up some. I still need put the Golf sending unit in the tank and pull pins 2 and 3 from the Audi fuel pump/sending unit (4 pin connector) and wire them to the VW 2 pin connector for the sending unit.

Did some work since the weather was nice. Here's the donor 2002 Golf with the engine ready to pull: 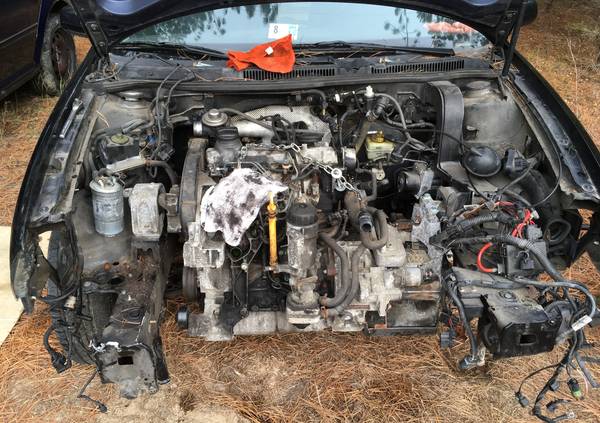 Here we are with the engine out: 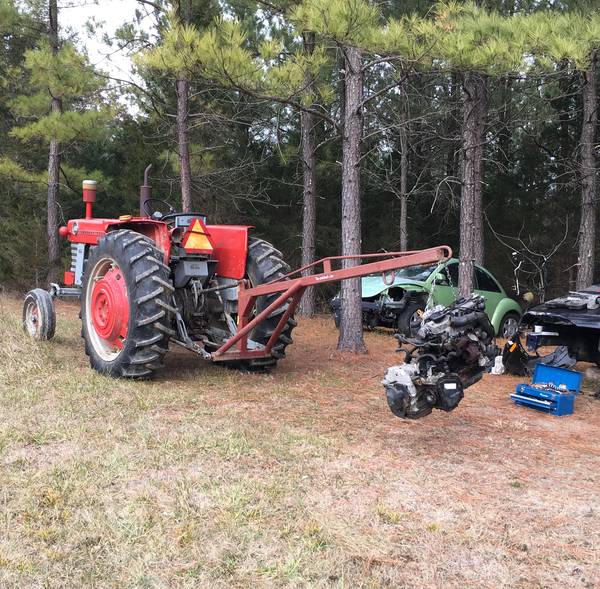 Someone has been busy! Looks good!
S

We've had some really nice weather the past couple of days, so I've been working on the wiring.

I've got the Automatic wiring harness converted over to a manual harness. That wasn't too bad:

I added two wires (T121/21 and T121/22) to the ECM connector for the coolant glow plug relays J359 and J360. Those are located above the ABS unit on the driver's side firewall. I will finish the wiring for these realys once the car is running.

I also added one wire (T121/66) to the ECM connector that runs to T10w/4 (white 10 pin connector in the cowl. That's for the Clutch Vent Valve Switch.

I swapped accelerator pedals yesterday since the gas and diesel pedals have different sensors in them.

So would my 01 harness work for you after all?

We've had some really nice weather the past couple of days, so I've been working on the wiring.

I've got the Automatic wiring harness converted over to a manual harness. That wasn't too bad:

I added two wires (T121/21 and T121/22) to the ECM connector for the coolant glow plug relays J359 and J360. Those are located above the ABS unit on the driver's side firewall. I will finish the wiring for these realys once the car is running.

I also added one wire (T121/66) to the ECM connector that runs to T10w/4 (white 10 pin connector in the cowl. That's for the Clutch Vent Valve Switch.

I swapped accelerator pedals yesterday since the gas and diesel pedals have different sensors in them.

The "mobile engine lift" is an MF180, perkins 4 cylinder diesel.

It's been cold outside (below 32) so I haven't done much work on the conversion. Here's a couple things I found that no one will probably ever read:

1) TESA cloth friction tape - that is what is used to wrap the wiring harness. I bought a roll off amazon. Really makes the harness look oem.

Do you have a specific model of friction tape - there are several to choose from.

Thanks for the tip!
S

I bought the Tesa 51608 on Amazon. There is also a Tesa 50126 that has a higher temperature rating. I figured the 51608 would be ok since the harness will be in the plastic runner, shielding it from most of the engine heat.

The tape is really nice. Looks just like OEM when you're done PLUS it keeps the harness a little more flexible than vinyl electrical tape.

Here's an update on where I'm at in the conversion, since it's been about a month since I last posted anything. A big thanks to pdq_import_repair for sharing some Mitchell wiring diagrams for the Audi and the VW. They are much easier to trace where wires go. The Bentley is nice in the details that it shows. I finally got the VW engine harness and ECM installed in the Audi and (I think) the Audi car side matched up to the orange, white, black, brown, and blue connectors. I tried to get the Audi fuel pump relay to act as the 109 Relay, but I could never get it to trigger to turn on the power to Fuses 32, 34, and 43. I finally wired in the 109 relay and the ECM triggers it, turning on the power to the fuses. I'm able to see the ECM through the DLC connector with VCDS (I don't have the engine in the car yet).

I've got the engine and transmission ready to put in the Audi. New VNT17 turbo, stage III clutch/pressure plate, 5 speed manual from my 2005 Beetle (I've got a 6 speed in it). I put the 02a axle flanges from the gas transmission on the diesel transmission (they were the 02j flanges). I swapped the compressor to expansion valve AC line and power steering line from the Golf. I unbolted the ball joints from the lower control arms to pull the axles back slightly to install the engine/transmission without removing the axle flanges.

-> A box of ziplock bags and a sharpie are indispensable when taking things apart
-> The MAP on the gas Audi is the same as the VW diesel
-> A good set of terminal tools makes wiring so much easier. I bought a blue, Lisle terminal tool, but the flats were too short for some connectors. I bought some longer very fine screw driver type terminal tools that worked GREAT

The TT TDI is on the road! See the first post at the bottom for the details. THanks!